A surge of pandemic-inspired generosity from Australian philanthropists and artists has enabled the National Gallery of Australia to acquire 20 new works worth $8 million – including #MeToo-related fashion from designers Discount Universe, and a masterful painting by Clifford Possum Tjapaltjarri.

National Gallery of Australia director Nick Mitzevich said the end of the financial year usually sees a boost to donations but the haul in recent months was worth twice what they would normally expect. 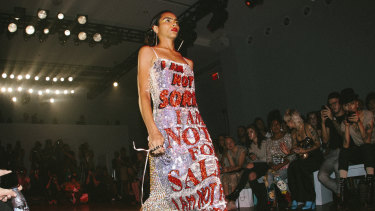 "[Donors] want to do something during this difficult time… to have a positive story to tell, and do something that makes everyone feel good," he said.

The announcement comes as the gallery has been fielding criticism over a radical change to its acquisitions policy that focuses on quality over quantity. The year before last it bought 3000 works, this year it will be "80-something", Mitzevich said. 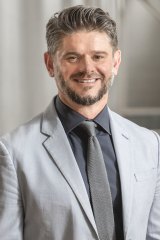 But he mounted an unapologetic defence of this policy, saying he has not reduced the budget for acquisitions, nor the value of gifts they receive. A bulk of the previous 3000 figure was "minor works on paper," he said.

"I'm interested in higher quality works that make an impact," Mitzevich said. "I feel very confident and positive about this.

"It's not a cost saving. It's making sure that anything that comes in can be put to work, and doesn't languish in storage for 20 years."

He said the new policy did not rule out emerging artists – far from it. He said his guiding principle was an "extraordinary lesson" he learned from NGA founding director James Mollison: that a work should enter the national collection if it marked a moment of resolution or breakthrough for a particular artist, or a moment of innovation in art.

Ten looks from Discount Universe's spring 2019 collection were a great example, he said. Australian designers Cami James and Nadia Napreychikov, now based in New York, had "tipped fashion and art upside down and collided them," Mitzevich said. "It's dynamic work that's really getting the attention of the whole world."

The collection "showed them at the height of their powers at a moment of great resolution" as they reflected on and reacted to the #MeToo movement. 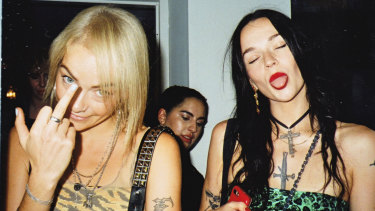 "The best art takes the pulse of society," Mitzevich said.

James and Napreychikov said their work has always straddled the fashion and art worlds and "to be perfectly honest, we have felt more comfortable in the art world at times".

"Art has a feeling of freedom, whilst fashion is often reduced to its commercial saleability and its wearability."

In the fashion world, too, there's a level of unattributed copying the art world would never allow. James and Napreychikov said rip-offs have "been happening for over a decade now… [we] are often told by friends in the industry that our work is all over mood boards of other design houses".

"There's not much to be done other than clock it up to the fact people like what we do." 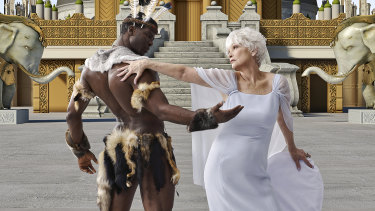 A still image from AES+F’s The Feast of Trimalchio, 2010.Credit:NGA

In the future they both want to "make the leap into art in a larger way and the fact we have been somewhat accepted thus far is a huge compliment".

Napreychikov said she was back in Australia for summer and was happy to see galleries increasing the number of women artists in their collection and on display. Some of the works donated to the NGA will be presented as part of the NGA's Know My Name initiative, aimed at increasing the representation of women in its program.

"To think of all the incredible work that was stored in archives and away from art history as we know it is very bittersweet," Napreychikov said. 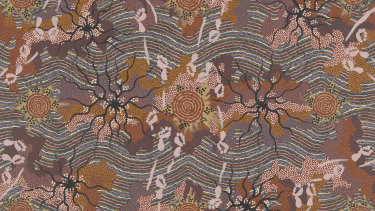 Mitzevich also highlighted other works among the recent acquisitions.

The Feast of Trimalchio is a 2010 video by Russian collective AES+F, who "make some of the most challenging and innovative moving image works in the world today," Mitzevich said – work that was already influencing new generations of artists.

Untitled by Rudolf Stingel marks the first time the influential Italian painter would be represented in an Australian public collection. And Larumba by Clifford Possum Tjapaltjarri was a 1993 "masterwork" that marked a moment of transition for the artist and for Indigenous art.