Barking mad! Dog owners transform their pups into INCREDIBLE multicolored works of art in the hopes of winning top prize at a grooming competition

Every year dog groomers from all around the country gather to showcase their multicolored, pimped-out pooches at a competition in Hershey, Pennsylvania.

The Groom Expo sees pet owners competing to wow a panel of judges and nab the winning title, and with a $2,500 cash prize up for grabs, groomers certainly go all out with their designs.

Some of this year’s wacky designs included a pumpkin carved into the side of a poodle, a giraffe, elephant, lion and gazelle carved around the circumference of a dog, and a transformation of a pooch into a variety of Looney Tunes characters. 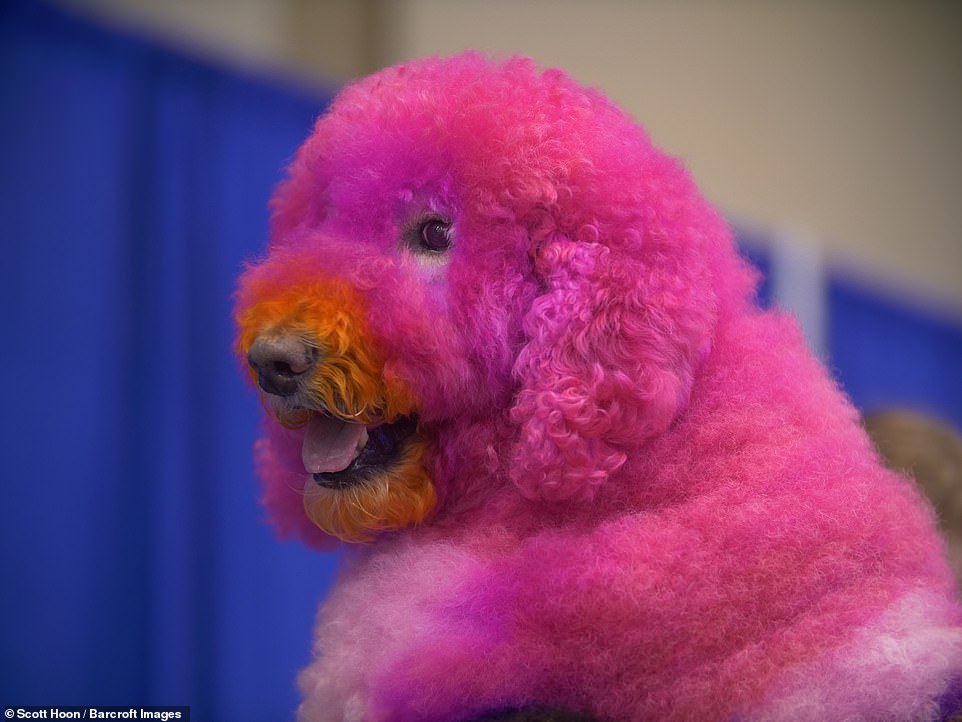 A dog’s day out: Every year the Groom Expo is held in Hershey, Pennsylvania. Dog groomers from all over the country gather to compete for the winning title and a $2,500 cash prize 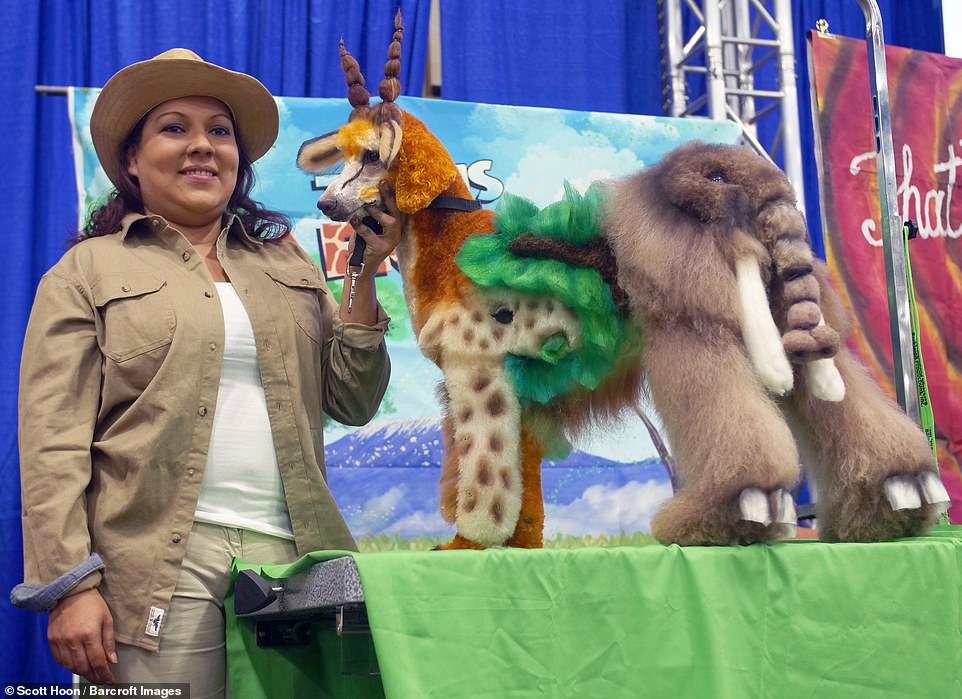 Safari-inspired: Dog groomer Milena Kon (pictured), and her poodle Soleit, are regular contestants at the competition. Her design featured an elephant, a giraffe, a gazelle and a lion 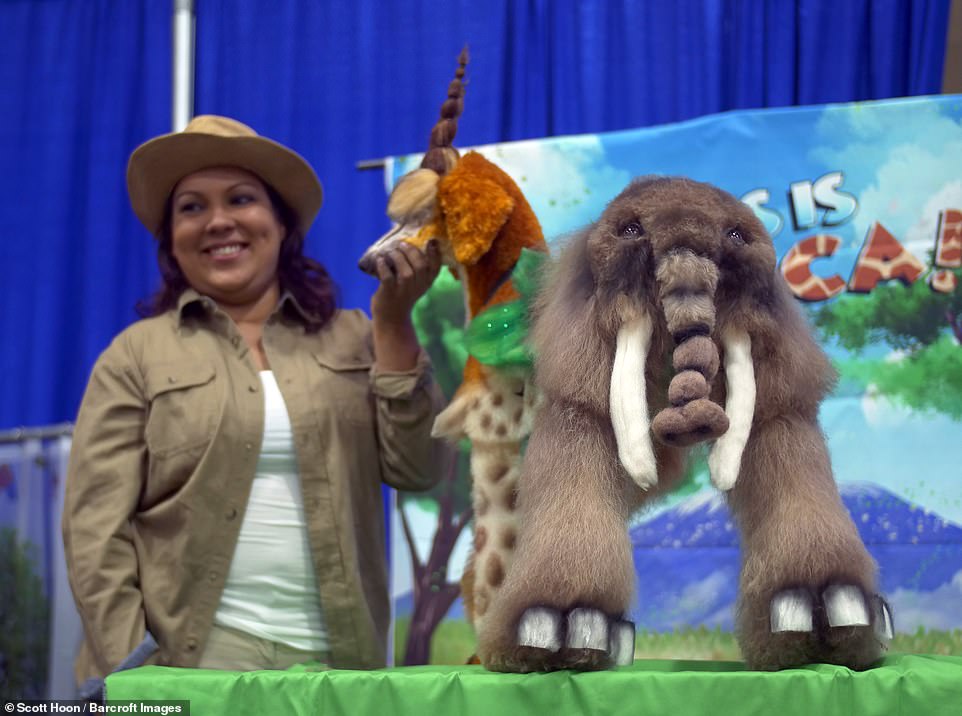 A work of art: Milena used different colored hair dye and cutting techniques to create a variety of safari animals on Soleit’s fur, including an elephant with tucks on the dog’s hind legs 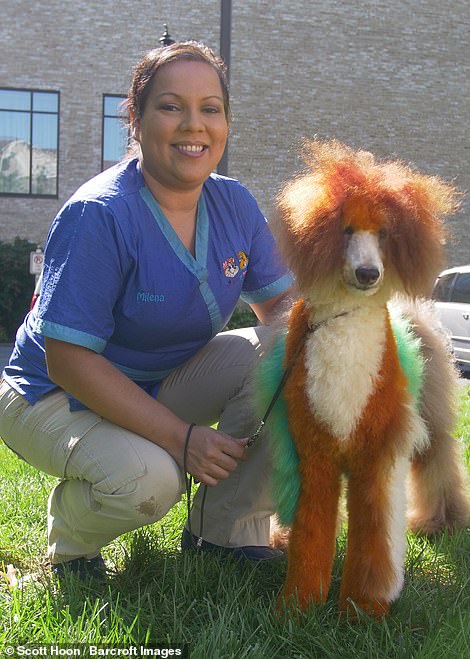 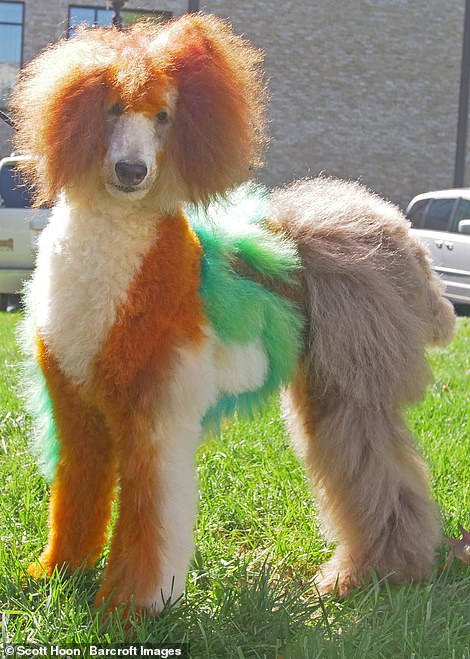 Poodle-pro: Milena has been competing in creative dog grooming for approximately three years

The competition sees dog owners showcasing their most outrageous designs as displayed on their dogs.

On the day of the contest, owners are given just three hours to shave, trim and color their pets hair, with the aim of creating a showstopping design.

Once the time is up, contestants must showcase their masterpiece to the judges and the audience.

Judges choose their winner based on various criteria including consistency in the hair dye and the standard of the cuts.

Professional dog groomer Milena Kon and her poodle, Soleit, are regular contenders at the competition.

Milena told Barcroft TV: ‘I have been grooming for about six years but I got into creative grooming about three years ago, when I came here in Hershey.

‘I told my husband that I am going to be up there one day with the girls, and here I am today,’ she added.

Milena has been competing with an ‘African’ theme since March, which features a giraffe, elephant, lion and gazelle designed using Soliet’s fur.

Poodles are a popular choice of show dog due to their thick, long hair that tends to grow continuously.

Milena, however, has a second show dog that she alternates with Soleit every second year. This allows enough time for Soleit’s hair to fully grow out the dye to fade out after a competition. 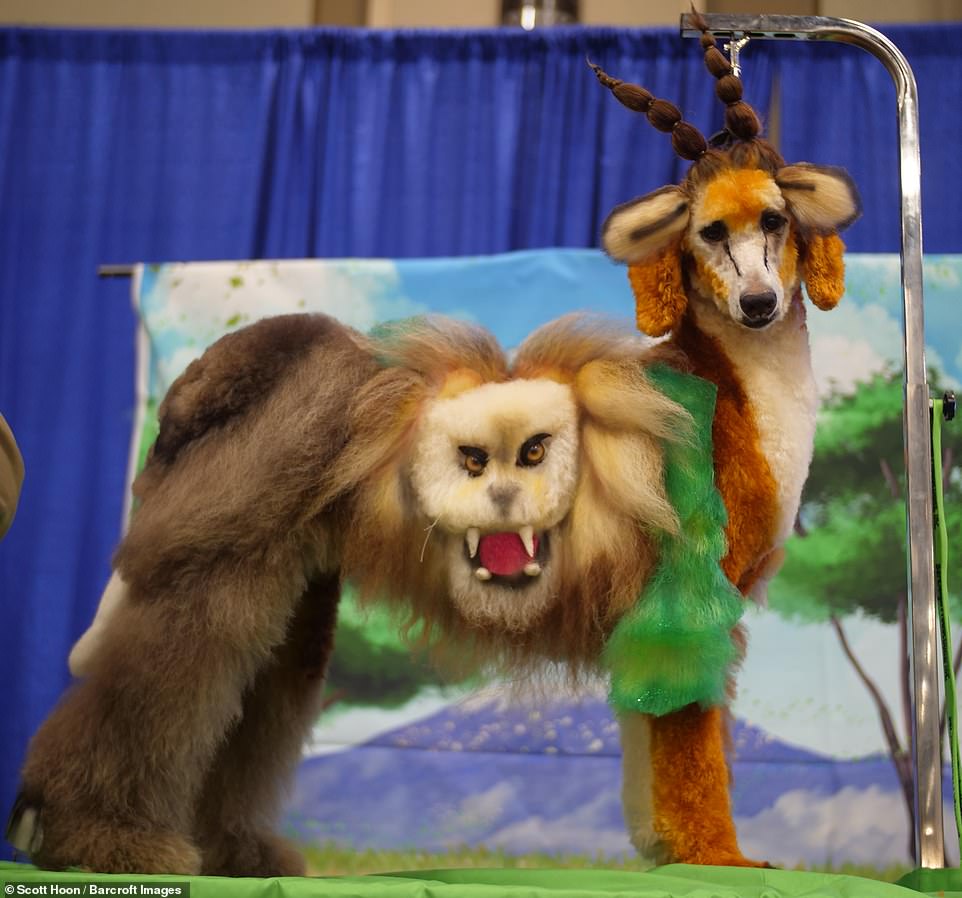 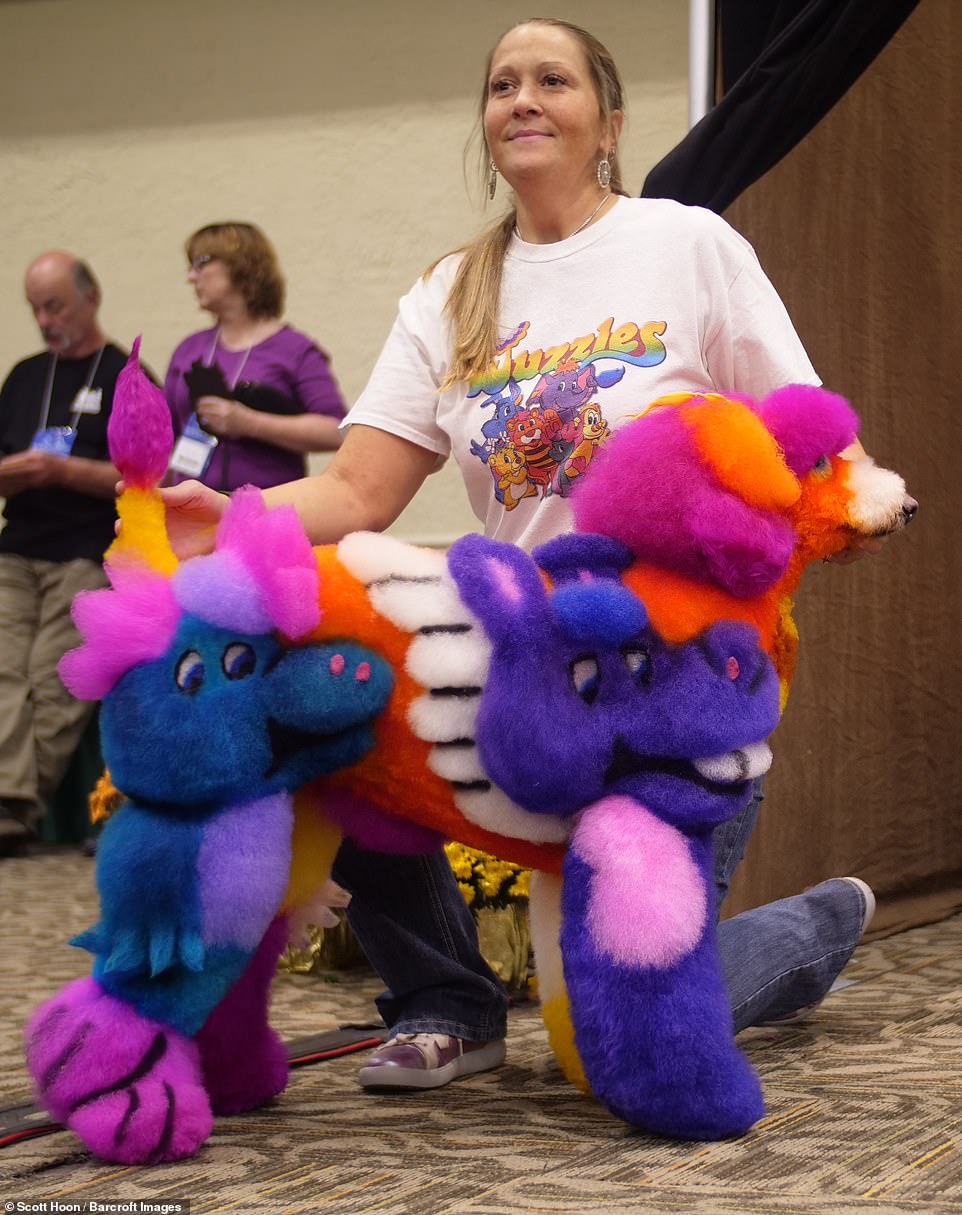 Winner winner! Cindy Oliver and her dog Paisley (pictured) won this year’s competition with a design inspired by 1980s cartoon The Wuzzles 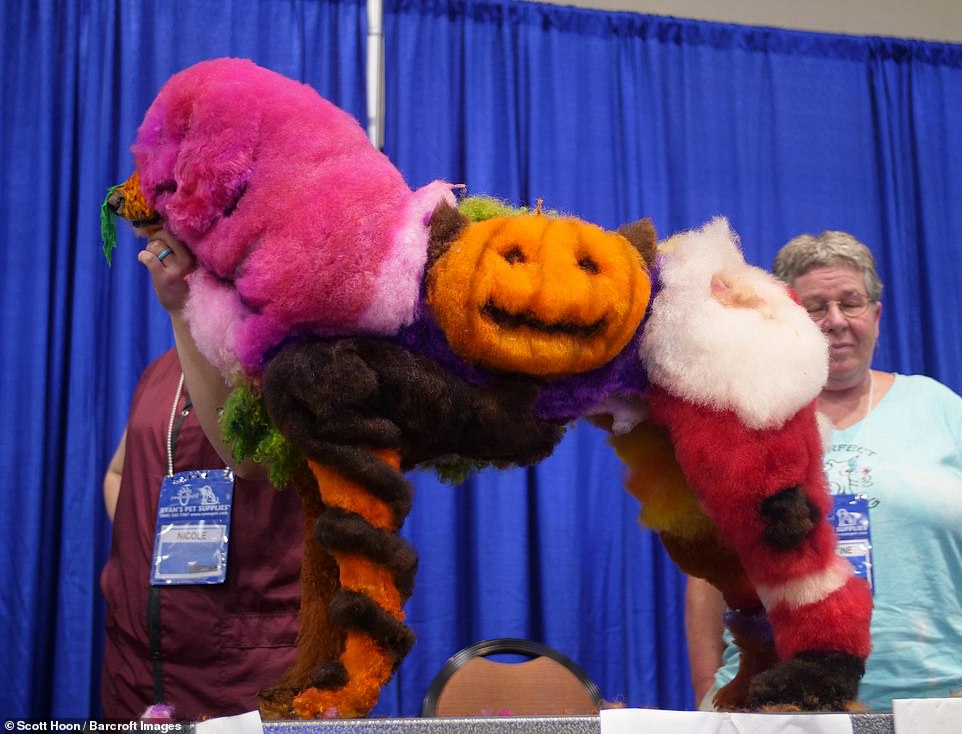 Stiff competition: A ‘seasonal’ design featured a carving of a pumpkin on the side of a dog and Santa Clause on one of its legs

She said: ‘I love the creativity, I love what you can do with hair – it’s just amazing.

‘And I always say that the dogs love it too, they love the attention.’

But despite Milena’s efforts in this year’s competition, she and Soleit failed to place in the competition.

The first-place title was given to Cindy Oliver and her dog Paisley.

The winning design was based on 1980s cartoon The Wuzzles.

‘There is always going to be competition, but fortunately enough we are all groomers and we are friends with each other, and I am happy for anybody that places above me.’

Emily Myatt, one of the judges for the competition, said the creative dog grooming business is a serious competition. 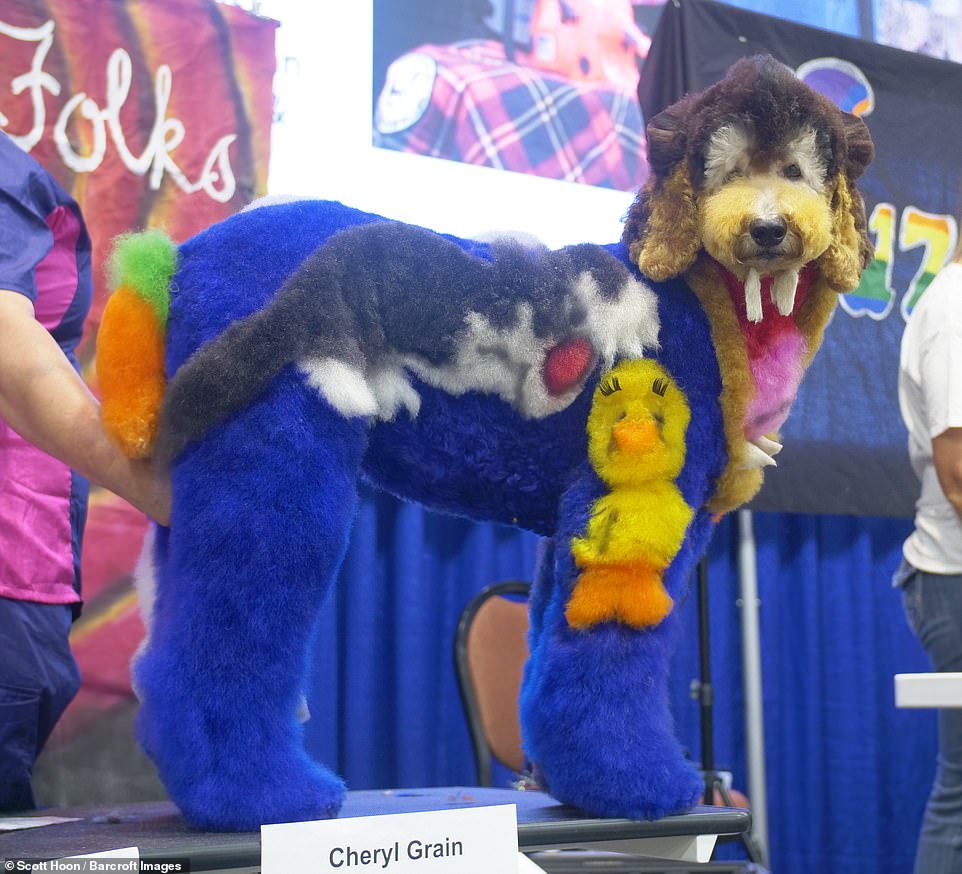 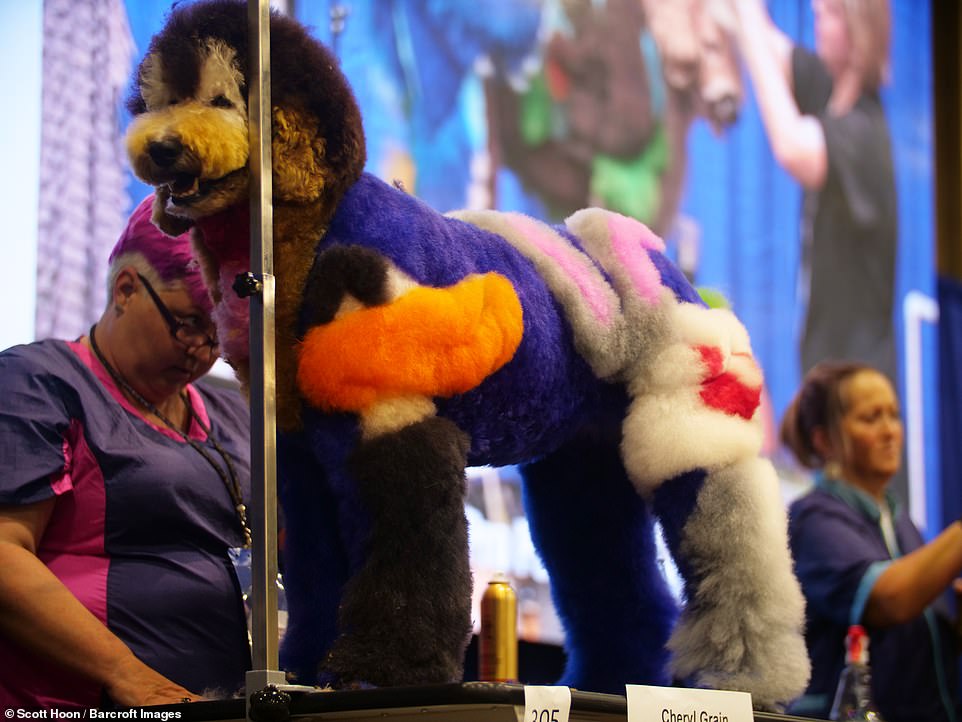 Whats up, Doc? Cheryl’s design also included a carving of Bugs Bunny and Daffy Duck into her dog’s fur

Some states in the US, including Florida, have laws that prohibit coloring pets hair.

Similarly, creative dog grooming is banned in countries like Belgium, because it is seen as animal cruelty.

However, despite this, Emily insists that the dogs are not harmed during the process.

‘All of the products that we use are completely pet safe and they are made for dog’s hair and skin so we don’t have to worry about the safety aspect.

‘It becomes the case that people ridicule because they don’t appreciate art.

She added: ‘I think if you have appreciation of any art, sculpture or painting then you will have a genuine appreciation of what girls do here, and they are doing it on something that can move which adds an element of difficulty.’