Legendary costume designer Patricia Field is the brains behind the unforgettable outfits from “Sex and the City,” “The Devil Wears Prada,” “Younger” and more.

Most recently, she’s reunited with “SATC” creator Darren Star for Netflix’s “Emily in Paris,” which follows a plucky, pretty social media pro (Lily Collins) as she navigates life and love in the City of Light — and as those who’ve already binge-watched all 10 episodes of Season 1 know, the show’s clothes are “très fabuleux.”

“I visualized Emily as an optimistic young professional who was happy to have an opportunity to work in Paris. She tries to adapt to French chic while still expressing her American identity,” Field, 78, told Page Six Style.

To that end, Emily often punctuates her everyday looks with berets, and even sports an Eiffel Tower-printed top by Alice + Olivia to her first day on the job at French luxury marketing company Savoir — a move that, according to Field, “expresses on one hand her naiveté, and on the other her excitement for this work opportunity.” 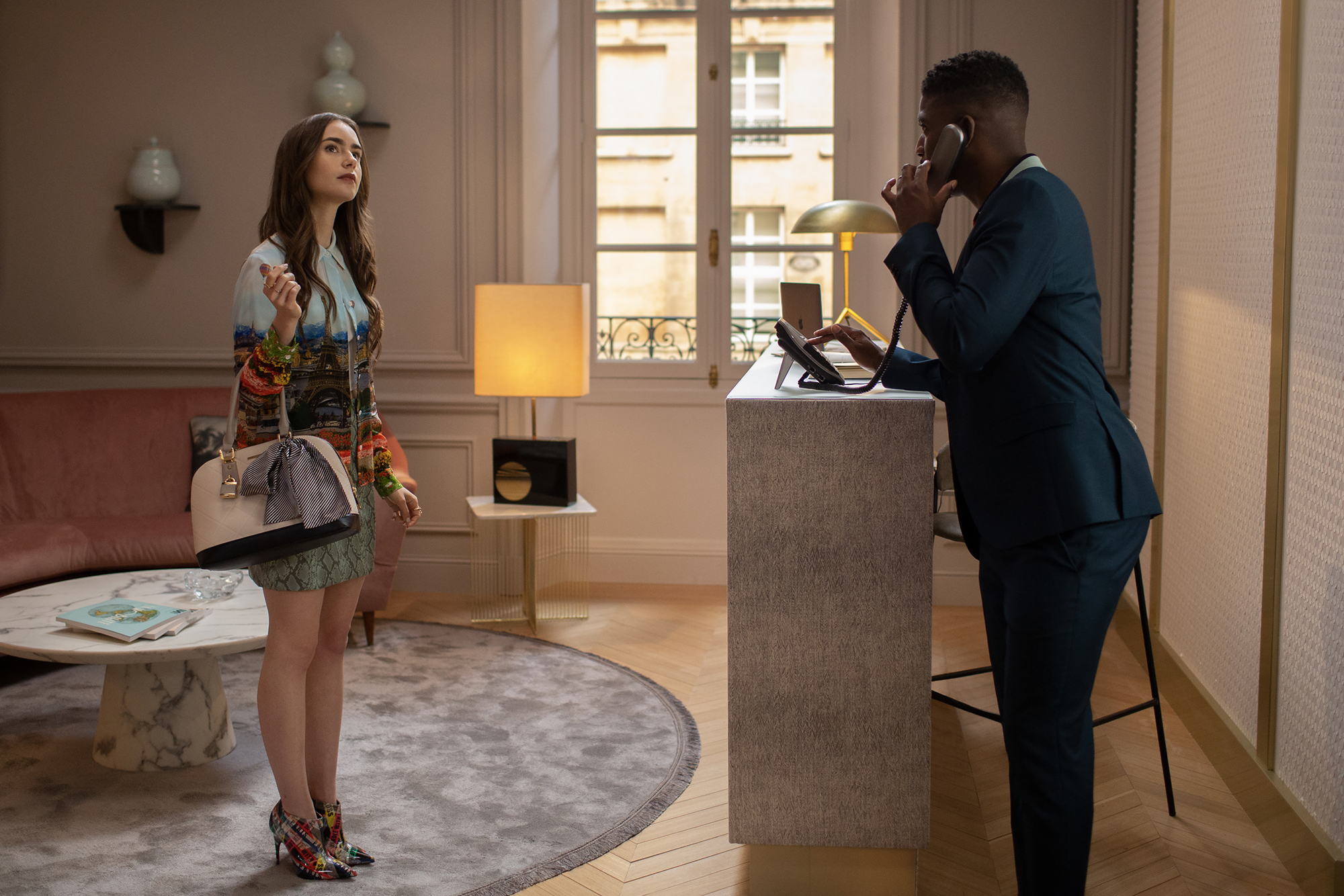 Like Carrie Bradshaw before her, Emily’s also got a closet full of covetable heels — except in place of the New Yorker’s Manolo Blahniks, the expat in Paris prefers Christian Louboutins.

Field says that Collins, 31, specifically requested all those red soles for her role, cobblestone streets be damned: “I guess she managed, as she never expressed any difficulty in movement.”

More problematic, at least plot-wise, is Emily’s designer bag charm, which results in her being labeled a “ringarde” (meaning basic) by couturier and potential Savoir client Pierre Cadault.

“I took my cue from the script,” Field told us of the character’s kitschy accessory, which she defends in an epic “Gossip Girl”-referencing rebuttal after ambushing Cadault at the ballet.

“She didn’t think it was tacky, but that it represented someone who couldn’t afford the original and decorated their bags as a symbol of respect.” 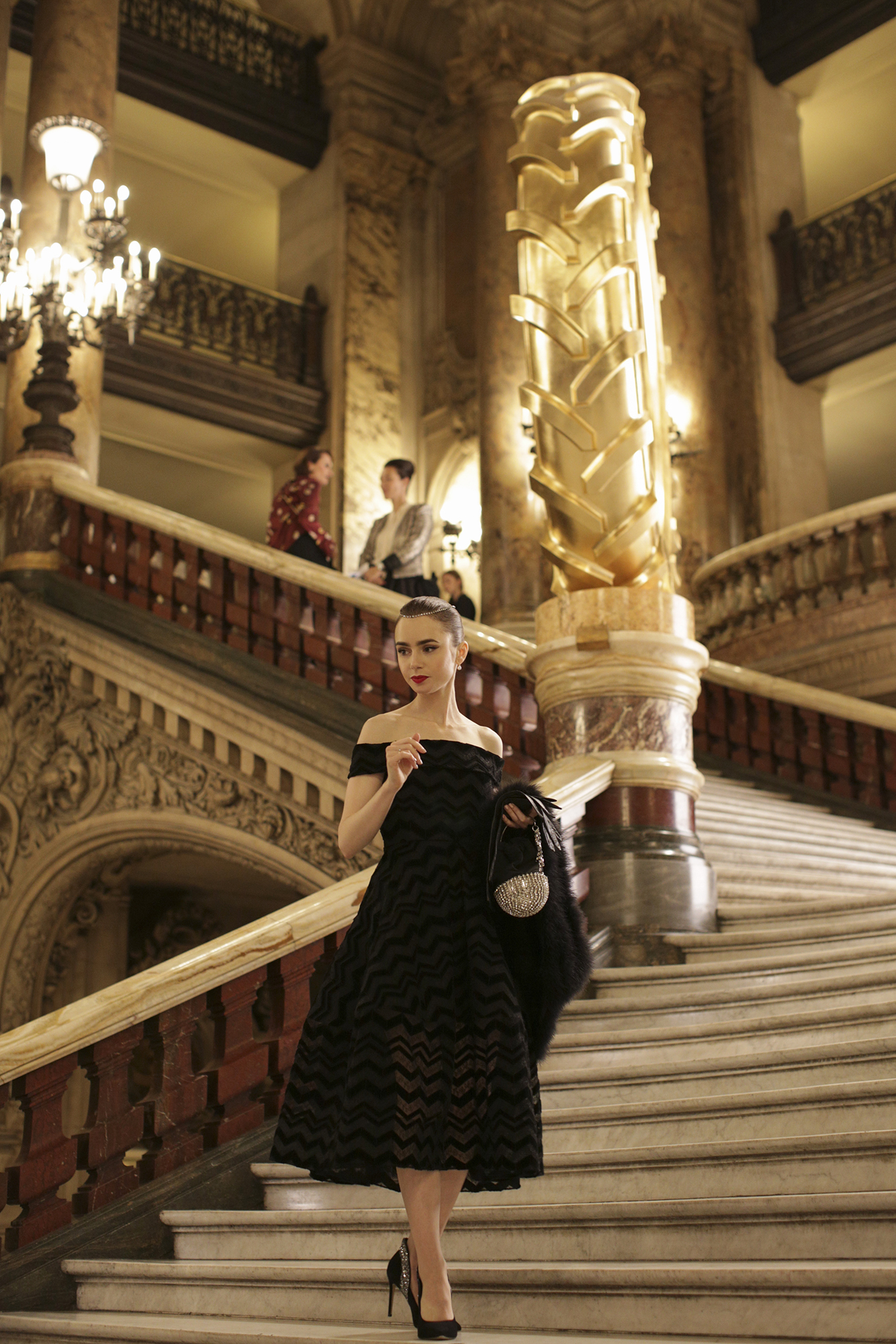 It probably helps Emily’s case that she’s dressed to the nines in an off-the-shoulder Christian Siriano frock, embellished Louboutins and sparkling vintage clutch when she confronts the cantankerous designer.

“The ballet outfit was inspired by Audrey Hepburn,” Field explained. “When I look at Lily Collins, I see a young Audrey Hepburn and I wanted to make an homage to Audrey, as I was a huge fan of hers.” 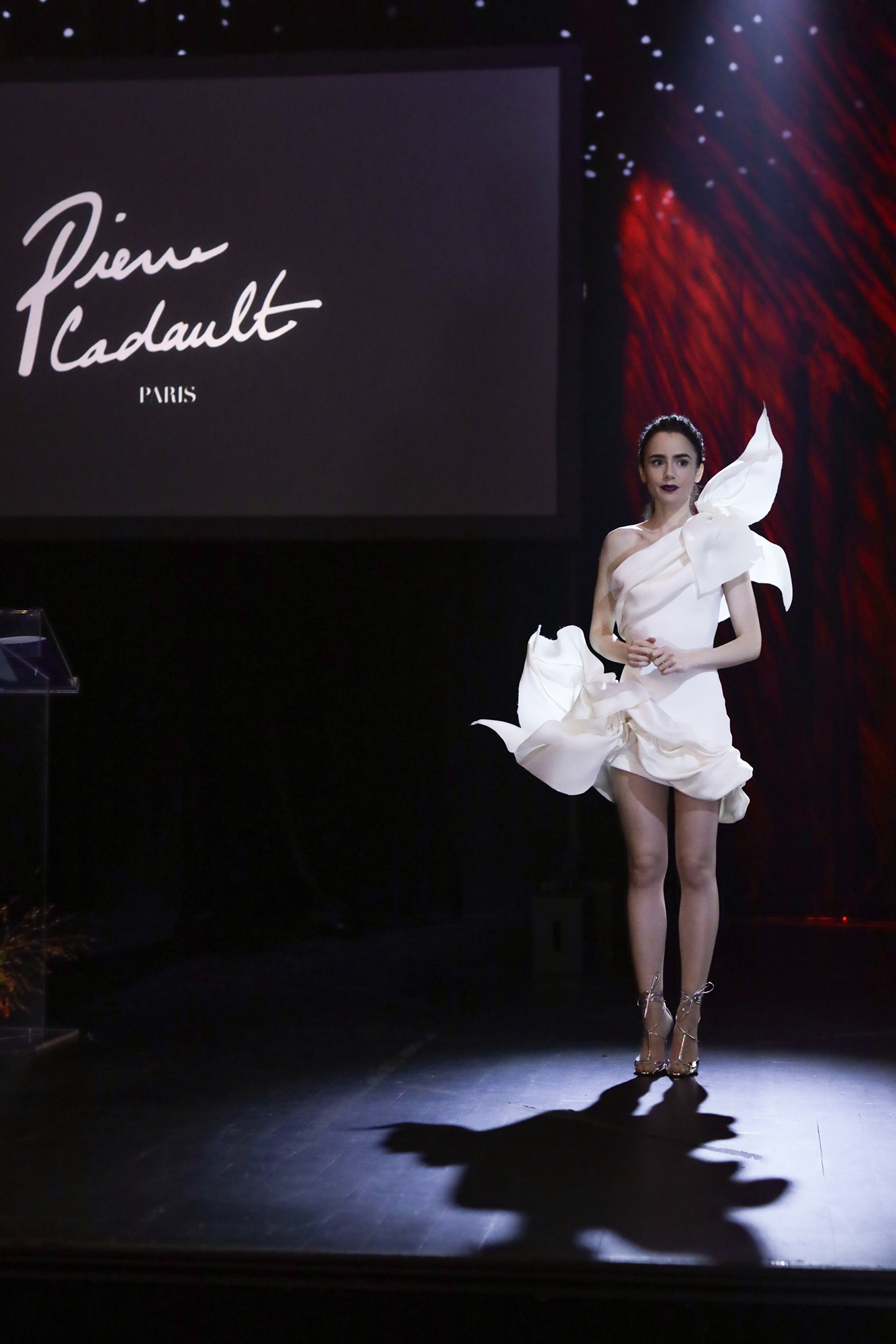 As for Cadault’s “designs” — which fill his Parisian showroom and are later modeled by Emily in the season’s penultimate episode — Field called in pieces from real-life French couturier Stéphane Rolland, whose clothes have been worn by the likes of Céline Dion and Jennifer Lopez.

She was introduced to Rolland by local costume designer Marylin Fitoussi, who helped Field curate the cast’s wardrobes and offered her on-the-ground expertise and contacts to the production.

But the costume design whiz admitted to being especially proud of Emily’s outerwear game.

“I particularly enjoyed the green Chanel jacket that I used an oversized look for her,” Field said. “That interpretation made it youthful, as when I put a Chanel jacket with a pair of jeans with Carrie.” 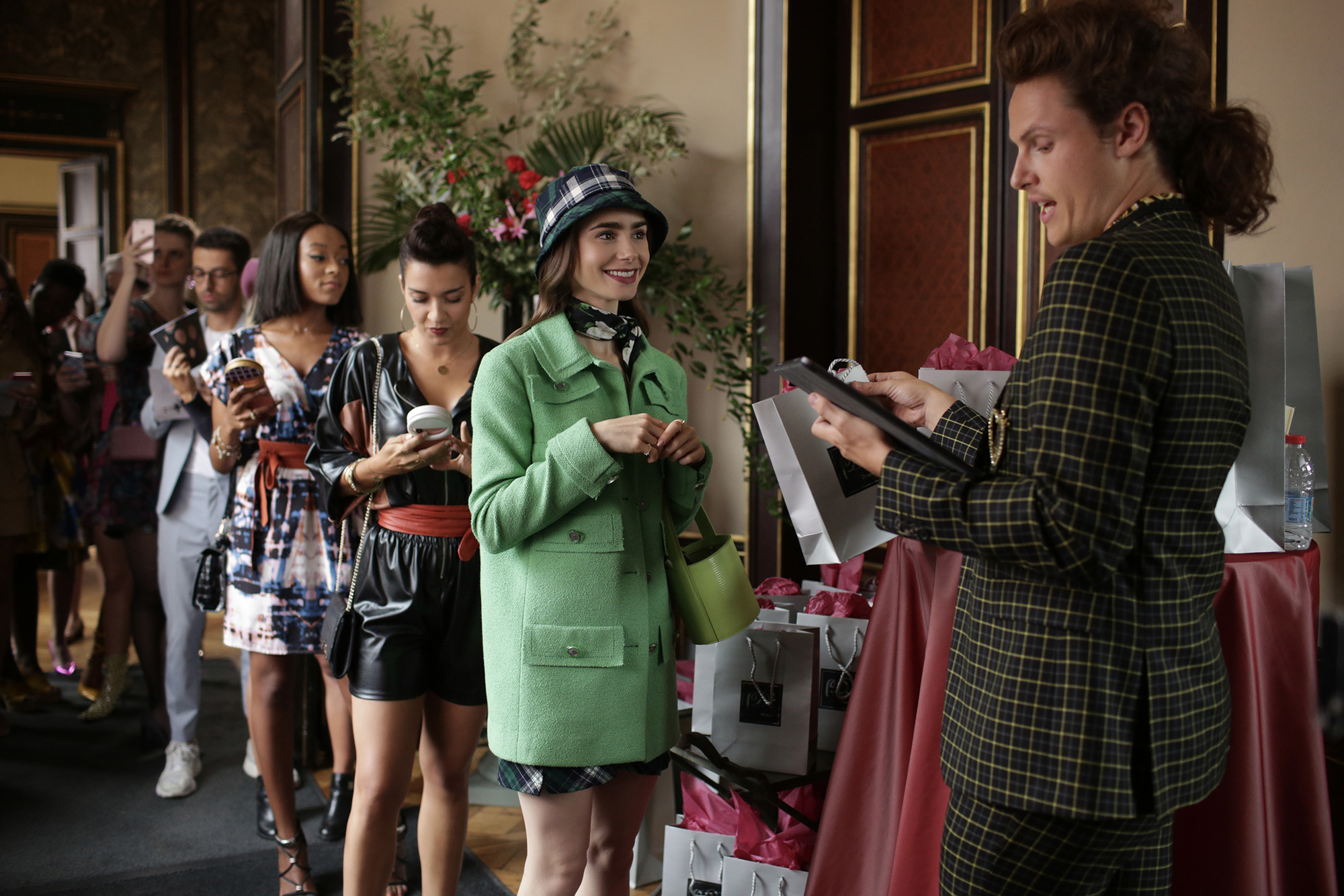 Another style standout that harkens back to Field’s work with SJP on “SATC?” Emily’s chic vintage camera-inspired phone case, which scores plenty of screen time as the character becomes a selfie-snapping social media superstar.

“I found the vintage phone case over a year ago while I was shopping in Korea for my boutique,” Field said. “My reason for using is was that in the script, Lily was constantly taking photos for Instagram and as so many people loved my case, I thought, let’s make her phone case the [new] ‘Carrie’ necklace.”

“Emily in Paris” is now streaming on Netflix. 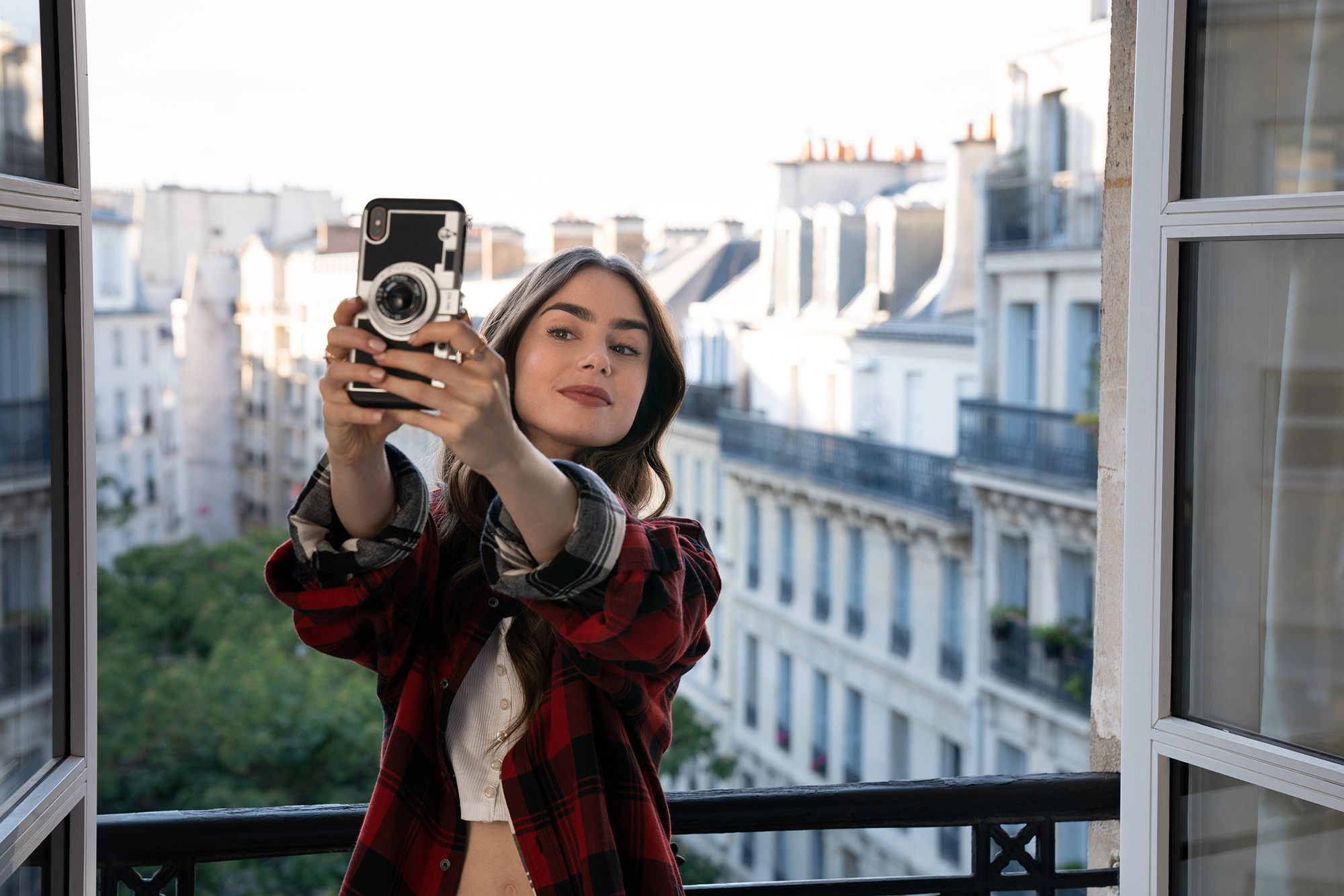