For what felt like the zillionth time in his short life, I found myself looking at my son as he did yet another hilarious thing the other day and thinking, “I must tell mum about this.”

Such thoughts are both a gift and a curse, because of course I can’t tell my mother anything.

She died over ten years ago, long before my son came along to amuse me with his little waddle and funny malapropisms. It was the cancer that took her, that uncompromising beast that strikes without warning and listens to the pleas and bargains of nobody. 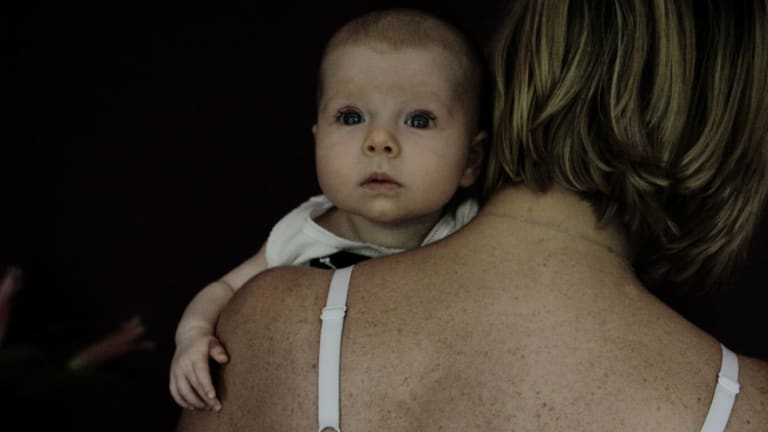 “She died long before there were any grandchildren to meet, and my sister and I both went through our pregnancies without the safety net of a mother who had faced the same unknown that we were staring down ourselves.”Credit:Louise Kennerley

Those of us who’ve suffered such a loss will know the contradictory feeling that comes in moments like this.

The memory of saying goodbye revisits itself again and again like having someone take a tiny scalpel to your skin and press a shallow nick into its surface. Not enough to draw much blood, but still sharp enough to leave the tiniest of scars – they shimmer in the right light, if you know where to look.

But the brief forgetting of loss is a gift in its own way.

Because for the tiniest of moments, so short that it’s not even a whisper of a breath but the slight parting of lips that comes before it, you forget that the person you loved more than anyone else is gone.

Time, elastic as it is, stretches out to surround you in a bubble where nanoseconds feel like years in which they get to be alive.

The mother-shaped hole that was left in my life after she died took on a significantly different form after I found I was pregnant, and it’s only become more pronounced now that my son is here.

My relationship with my mother while she was alive was reasonably typical: I adored her when I was little, I turned into an obnoxious nightmare when I was a teenager, and in my early twenties we started to understand each other and become friends. Then she died. Surprise!

But throughout the trauma of adolescence and the cavernous divide it seemed to place between me and my mother, I always held on to a kind of future-memory of her being there when I eventually had a child myself.

We all knew that she would have made a wonderful grandmother, even when she was still in the thick of parenting children.

She used to talk with such enthusiasm about it with my sister and I, and it was nice for both of us to know that support would be forthcoming when we needed it.

Except that it wasn’t.

She died long before there were any grandchildren to meet, and my sister and I both went through our pregnancies without the safety net of a mother who had faced the same unknown with us that we were now staring down ourselves.

There were so many things I wanted to discuss with her, not just about the state of pregnancy itself but also the emotional changes that happen when you decide to bring another life into the world.

I wanted to sit with her over a cup of tea and ask her to tell me (again) the story of my birth.

Later, after I had been through it all myself, I wanted to ask her if she felt The Fear when she looked at the tiny creature she had now assumed such monumental responsibility for.

I wanted to watch her snuggle my baby and smell his head, to wave goodbye as she walked him around the block so I could try to get an hour’s sleep, to listen to his giggles as she made nonsense noises and faces at him.

I wanted to teach him that her name was Grammy, and to see her face when he called her that for the first time.

I wanted – I still want – to be able to say sorry. That she was right, that I wouldn’t understand certain things until I could see it from her side.

“I can’t wait for you to become a mother yourself,” she’d say when I was exasperating her or being monstrously rude (again).

My son and I still have a fair way to go before adolescence hits, but I can already tell that I’ll be saying sorry to her for a long time.

I have wrestled so often with the resentment I feel towards other women whose mothers are still alive and so involved in their children’s lives.

This resentment becomes especially poisonous when I hear their complaints – that their mothers have too many opinions (while providing them with free care), that they call them too often, that they put their children in clothes they don’t like and buy them sugary treats to eat.

Dammit, I wanted to be able to complain about my mother too! (A wry joke I have no doubt she’d appreciate).

But life isn’t fair, and we soldier on regardless. I have found without even looking for them a collection of other motherless mothers.

We mourn them all together, and offer some kind of peace and connection to each other when their absence is particularly felt.

It’s a way of coping, and it’s what mothers have always done I suppose. They taught us that, as they did so many things. We are not alone, as it turns out. It’s a nice realisation.