One of the largest military manoeuvres in the world will happen in Sydney next October.

But rather than weapons, these soldiers will come bearing a different type of arms – specifically, pipes and drums.

Hot off the back of the annual summer season at the Edinburgh Castle, Scotland, 1200 performers from around the world will make their way to Sydney for The Royal Edinburgh Military Tattoo.

Tattoos originally served as a drum- or trumpet-led signal to instruct innkeepers to stop serving beer and for soldiers to return to their barracks, however in the 1900s they became a form of entertainment in military and garrison towns.

Since 1950, the military tattoo in front of Edinburgh Castle has become an major drawcard for tourists to the Scottish capital, as part of the annual Edinburgh Festival.

A version of the Tattoo has been held in Australia before, the last time in 2016 when it marched into Melbourne's Etihad stadium.

Next year it will be Sydney's turn, with ANZ stadium playing host to the event with four performances being held over four days. 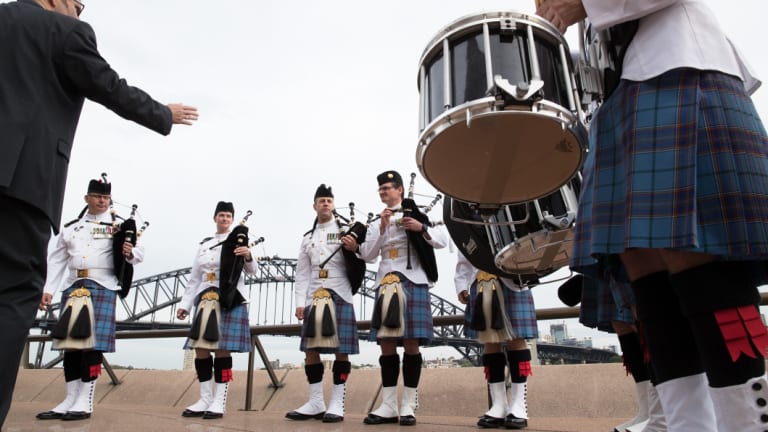 Members of The Royal Edinburgh Military Tattoo assemble for the announcement that they will be coming to Sydney in 2019. Credit:Janie Barrett

Brigadier David Allfrey, who served with the Royal Scots Dragoon Guards, and is now the producer and chief executive officer of the Royal Edinburgh Military Tattoo, said next year's event will be bigger than ever before.

"It is a huge privilege for us to be invited to stage a Tattoo that stands to be bigger and more extraordinary than ever before," he said.

"We are thrilled to bring together some of the finest pipers, drummers, military musicians and other performers to Sydney. We are very excited at the prospect and look forward to welcoming audiences from across Australia and further afield."

The Royal Edinburgh Military Tattoo will play ANZ Stadium from October 17-19. Tickets go on sale in April through Ticketek.