A woman who received an email from her child’s school asking parents not to contact teachers on weekends, evenings and public holidays, has labelled their request ‘unreasonable’.

Posting on Mumsnet, the British mother explained her child’s school has asked parents only to email between 8:30am and 5.30pm because the amount of contact they receive can impact their wellbeing.

She said it’s not always possible to access her phone to send an email while she’s working during the day, and emailing out of office hours doesn’t mean she expects teachers to respond straight away.

The majority of commenters sided with her saying the teachers should just stop checking their emails outside of working hours if it stresses them out, but others said the onus should be on the parents to schedule messages to send within the given time frame. 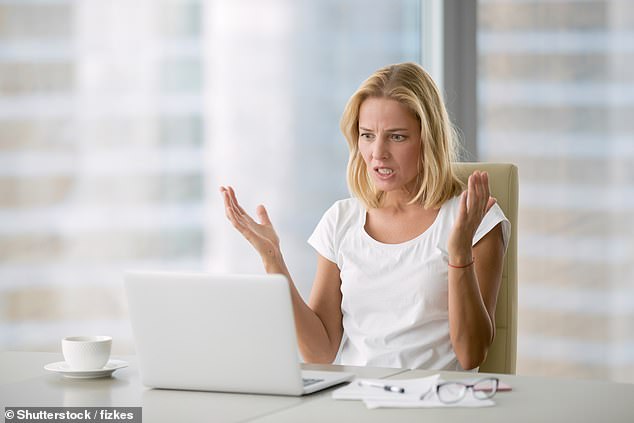 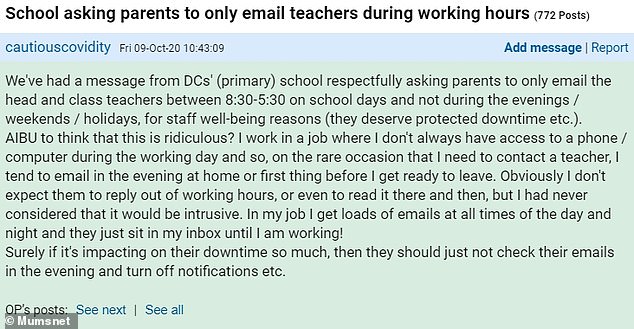 The woman took to Mumsnet, explaining it isn’t convenient for her to email her child’s primary school between 08:30-17:30 because of her work commitments

Venting her frustrations, the mother said her children’s primary school had ‘respectfully’ asked parents to only email the head and teachers ‘between 8:30-5:30 on school days and not during the evenings/ weekends/ holidays, for staff well-being reasons (they deserve protected downtime etc.)’

Branding the request ‘ridiculous’ she said that she doesn’t have access to a phone or computer during her working day.

‘On the rare occasion that I need to contact a teacher, I tend to email in the evening at home or first thing before I get ready to leave,’ she said.

‘Obviously I don’t expect them to reply out of working hours, or even to read it there and then, but I had never considered that it would be intrusive. In my job I get loads of emails at all times of the day and night and they just sit in my inbox until I am working.

‘Surely if it’s impacting on their downtime so much, then they should just not check their emails in the evening and turn off notifications etc.’

A flood of the initial responses to the post agreed that parents should be able to make contact with teachers whenever they want.

One person wrote: ‘That is ridiculous, it’s a bit like saying you can not call a company out of hours and leave a message on the answer machine. The point with email is you can send it whenever convenient and they can read it and reply whenever convenient for them. They of course have no obligation and should not be expected to reply out of work hours.’

‘They should not be telling you when to email but they should be saying that staff will not answer outside working hours and encouraging staff not to check emails in evenings etc if they don’t want to.

‘You can either set your email to send at a set time, or preface your email with, “I’m not expecting a response outside working hours but don’t have access to email in the school day”,’ another said.

A stream of responses to the post agreed the school’s request seems unreasonable, arguing teachers don’t have to reply to emails until it’s convenient

Others argued the mother should respect the school’s request because teachers are under a lot of ‘pressure’ at the moment.

One wrote: ‘This is not ridiculous, can’t believe anyone could think so. It’s like no one has ever read any mental health initaitives around this.

‘It’s proven people will still look and check their emails and therefore get stressed. If you’re busy at work between those times, then don’t you think the teachers are also at work and after would like to relax? Also you’ve got to be quite inept to not understand how to just time your emails, it’s automatic. Program to send between 08:30-5:30. Problem solved.’

Another said: ‘It’s a massive wellbeing issue. Unlike many other professions, teachers often get frankly nasty emails from parents. I think people get more emotional because it’s stuff that affects their kids and don’t realise how they’re coming across.

‘We’ve had teachers up all night worrying about abusive emails received late at night (the person sending it probably wouldn’t have considered it abusive, but the recipient did)…’

‘Teachers are often online late preparing work or dealing with admin, so it’s hard to ignore new emails pinging in. Teachers are all under so much pressure at the moment, I’d respect their wishes.’

A third added: ‘I think the problem can arise when different teachers have different reactions. I only ever read or respond to work emails in school hours. I had one colleague who read and responded to every email as it arrived. Including Sunday evening, which must have confused parents. So Ms Soandso is great, she answers straightaway but that Ms Read doesn’t. And some parents really do expect and answer immediately. They think we have secretaries. ‘