‘I had a knife in my hand’: Woman, 29, with vitiligo who was driven to the brink of suicide by bullies now appears on billboards in New York after being scouted for modelling campaigns

A woman driven to the brink of suicide by cruel name-calling after being diagnosed with vitiligo now appears on billboards in New York – having been scouted for modelling campaigns.

Then an aspiring model, Aiesha Robinson, now 29, from Montreal in Canada, was diagnosed with the skin condition – which sees sufferers develop white patches on their skin due to a loss of pigmentation – in 2007, and endured being compared to a cow and told she’d been cursed by cruel bullies.

At her lowest point in 2014, Aiesha said she contemplated suicide, but credits her ‘wise’ older brother Jamie with encouraging her to finally accept herself and the way she looks.

‘I was contemplating suicide and one day I had a knife in my hand,’ Aiesha said of her shattered self-confidence. ‘I just didn’t want to feel the pain anymore.’

But Aiesha said she knew it ‘wasn’t the way out’, and since then has gone on to found her own non-profit allowing people to share their stories of adversity – and appear in an international campaign for a specialist makeup brand.

Aiesha, who has also modelled for the fashion brand Missguided, said seeing her face on billboards was an “oh my goodness” moment that left her in floods of tears. 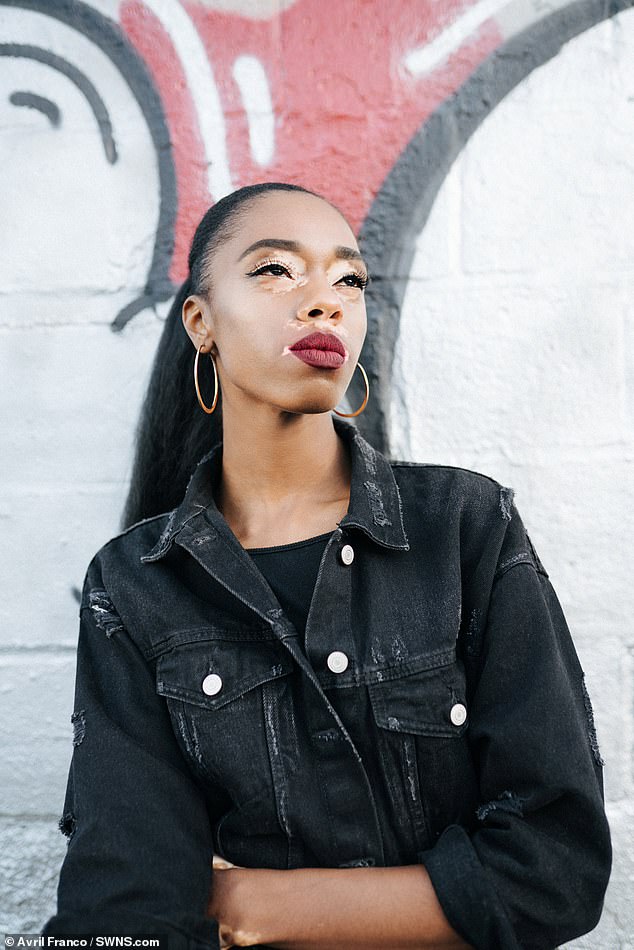 Aiesha Robinson, 29, from Montreal in Canada, has told how she endured years of cruel name calling after being diagnosed with vitiligo in 2007 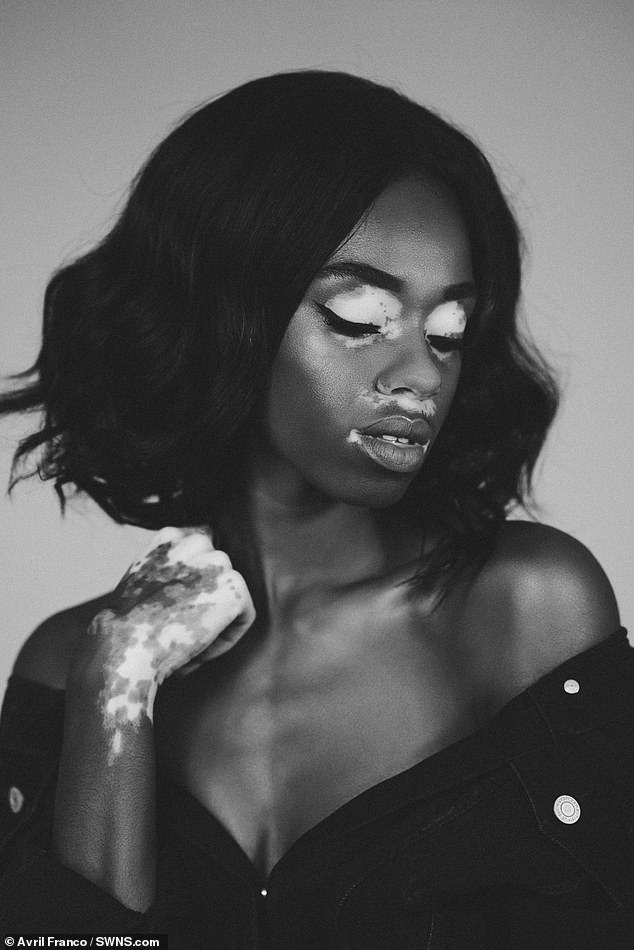 The bullying was such that Aisha contemplated suicide in 2014, but credits her ‘wise’ older brother Jamie Robinson, 32, with encouraging her to learn to accept herself and the way she looks 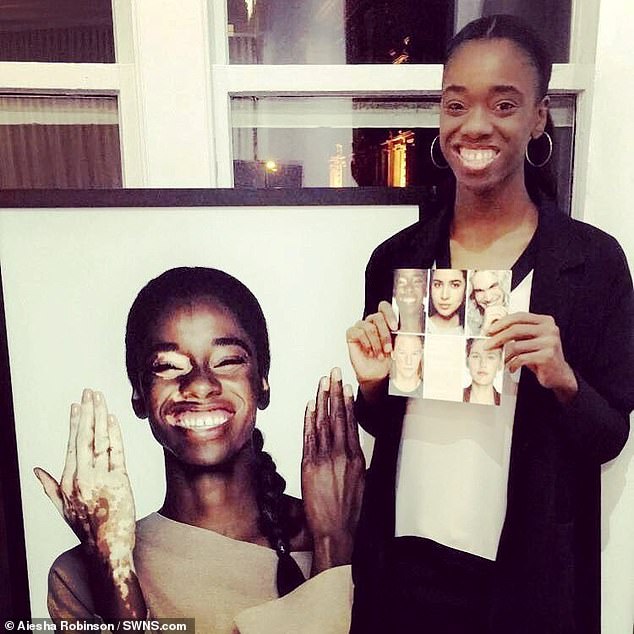 Since then Aiesha has gone on to found her own non-profit, which aims to help people tell their own stories of adversity, and been approached to be a face of makeup brand Dermablend

After years of enduring stares and name calling, Aiesha says her ‘epiphany’ came following a conversation with her brother Jamie Robinson, 32, who encouraged her to learn to accept herself.

The model went on to establish her own non-profit, Born to Rise, in 2015 which helps people share their adversity during an annual storytelling show.

It was through her work in the field that the 5ft10in beauty was approached to be the face of Dermablend, a makeup brand designed to provide natural looking coverage for customers with skin imperfections.

The model said she was brought to tears when she saw her image on a New York billboard as part of the brand’s national campaign.

Aiesha, of Montreal, Canada, said: ‘Before my diagnosis I had modeled a little but but it was never a serious passion or career for me.

‘The changing point for me came in 2014. I basically had an epiphany.

‘I was contemplating suicide and one day I had a knife in my hand.

‘I just didn’t want to feel the pain anymore.

‘I’ve been called a cow, and told I have been cursed. People would tell me how bad they felt for me.

‘I knew suicide wasn’t the way out though and I didn’t want to do that to my family.

‘I had a talk with my older brother who is so wise. 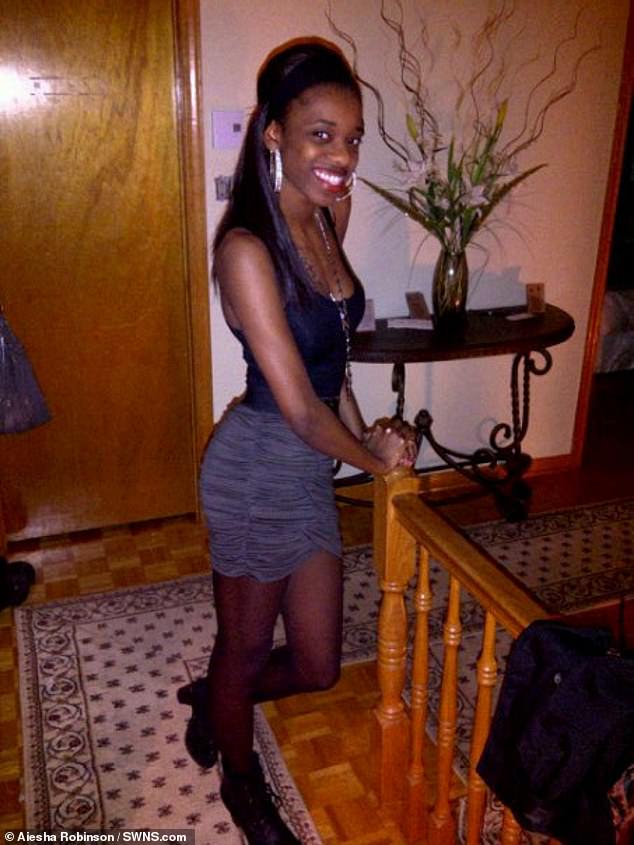 Aiesha, seen before her diagnosis, has admitted to contemplating suicide at her lowest ebb 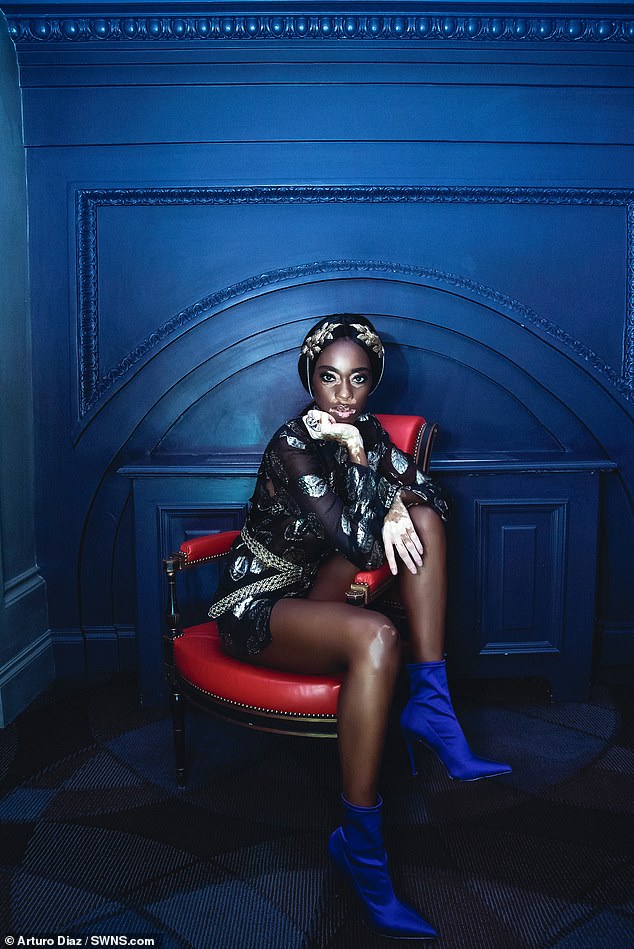 Dermablend, the makeup brand of which Aiesha became a face, is designed to offer natural looking coverage to customers with skin imperfections

‘He basically said Aiesha you need to realise the vitiligo isn’t going anywhere.

‘You are going to have to deal with it the rest of your life.

‘You have to learn how to rise above it instead of having a pity party.

‘My new aim is to spread a message through education.

‘I set up Born to Rise, which helps people share their own adversities through storytelling.

‘Every year we throw a show.

‘It was after one of these shows that I was approached by a Canadian modelling agency and was connected with Dermablend, a make-up brand. 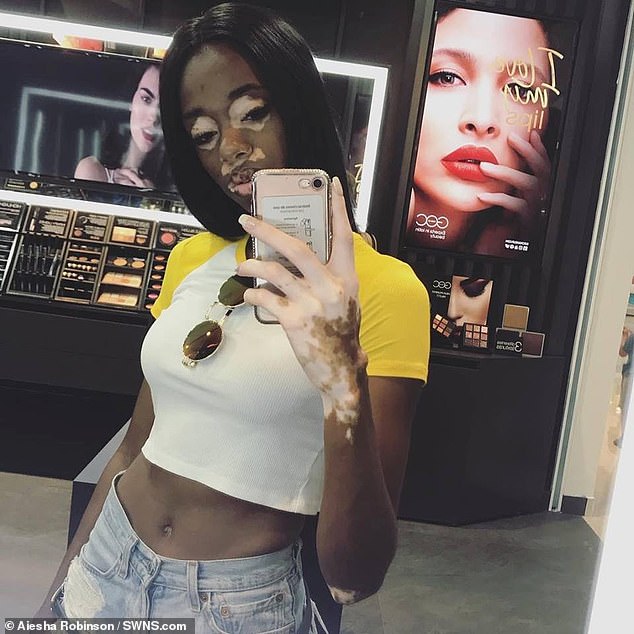 It was through her work with her non-profit, Born to Rise, that Aiesha was approached by a Canadian modelling agency 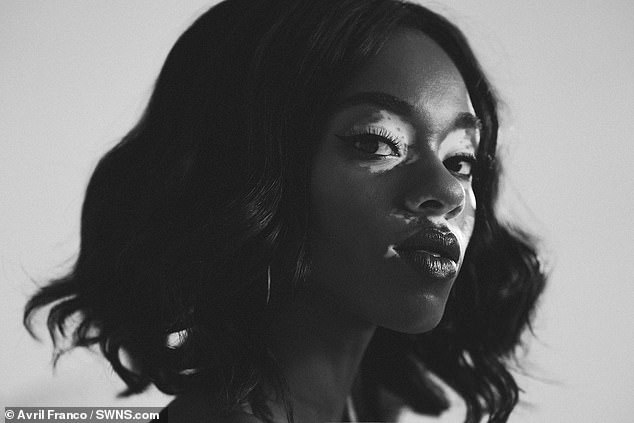 ‘What is life without challenges?’ says Aiesha now, seen in an image from one of her modelling shoots 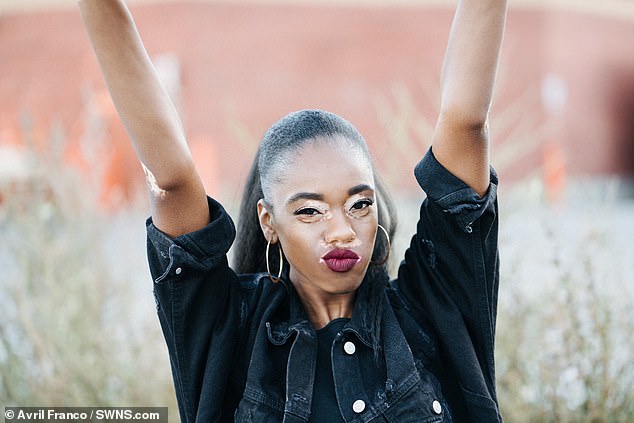 Now, Aiesha says she feels ‘absolutely blessed’, and determined to show others who are struggling that ‘there is a future’ 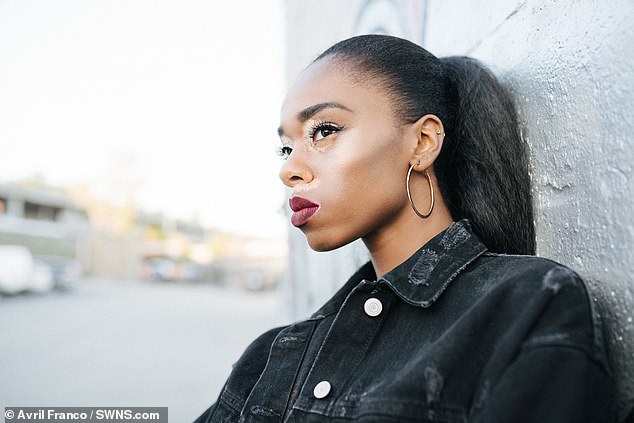 In addition to being a face of Dermablend, Aiesha has modelled for brands like Missguided and WeBay 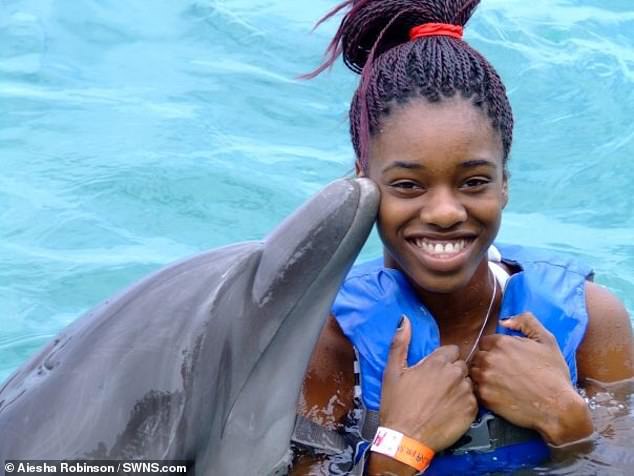 Now Aiesha, seen before her diagnosis, is pursuing her dream of walking the runway at fashion week in New York or Paris

‘When they asked me if I wanted to front the campaign it was an “oh my goodness” moment.

‘The campaign was international, I was on billboards in the US and Canada.

‘To see myself on a billboard in New York was surreal. I shed tears when my friend sent me that picture.

‘To go from such a negative place where life wasn’t worth living to having this moment and this self realisation was incredible.’

Since then Aiesha has featured in campaigns for Missguided and WeBay and says she feels proud to show others with vitiligo that there is a life to be had after a diagnosis.

Aiesha said: ‘I feel absolutely blessed and I have a very clear purpose now to show other people with this condition that it is beautiful and there is a future.

‘What is life without challenges?

‘When I was first diagnosed I worried I would be ugly, that I would lose all my friends and I would never find a boyfriend.’

‘But I feel like I’m in a good place now and I hope that through my organisation I’m helping other people with vitiligo.’

Aiesha is ambitious and hopes to take her message to international fashion platforms.

‘It is my dream to walk the runway at New York and Paris fashion week,’ she said. ‘That would be amazing.’