Trailblazing Vogue model with Down’s syndrome, 18, insists she’d rather appear unretouched in photos to show her ‘real beauty’ as she graces the cover of Glamour

Model Ellie Goldstein has insisted that she she would rather appear in unretouched pictures in order to showcase her natural beauty.

The 18-year-old model from Ilford, Essex, graces the cover of Glamour UK’s September digital edition, which honours the new faces shaking up the world of fashion and proving it can be inclusive.

Ellie, who was the star of Gucci’s Unconventional Beauty Campaign in July, was the first model with Down’s syndrome to ever work for the fashion designer, and the first to ever pose for Glamour.

Talking about diversity and representation in the world of fashion, Ellie said she prefers when her photos aren’t edited, saying: ‘I’d rather be as natural as possible without retouching or filters and show my real beauty.’ 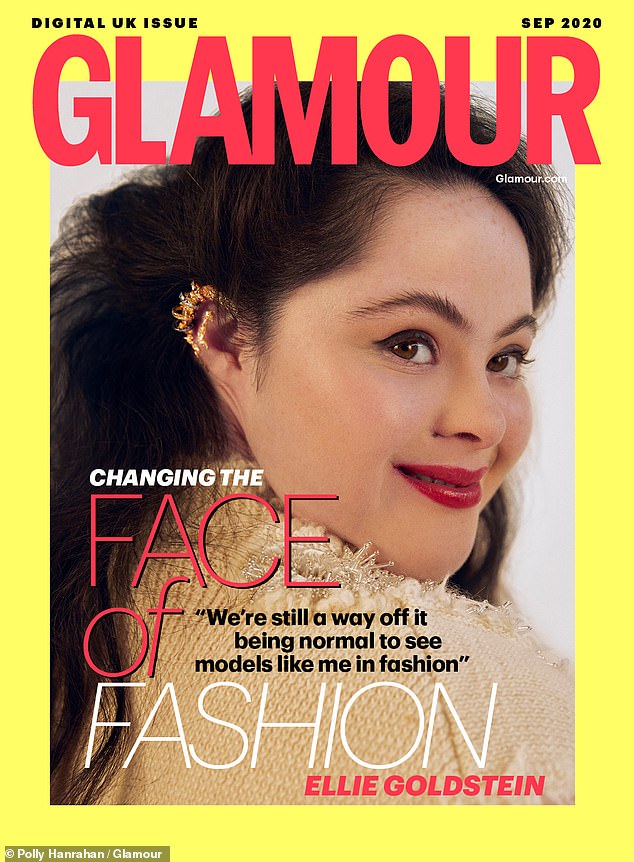 The model added: ‘People have to “get me” and see my personality not the disability.

‘My role model was my sister, Amy, because she took me shopping and we did so many things together. She chose many of my outfits and still does! I have always been outgoing and my passion was to be a model, act and be famous,’ she said.

The teenager added: ‘The change I want is for other brands to use models with disability hidden or not. Everyone deserves a chance and to achieve what they want.’

Ellie said she hoped to remain a role model for others aspiring to break into the world of fashion. 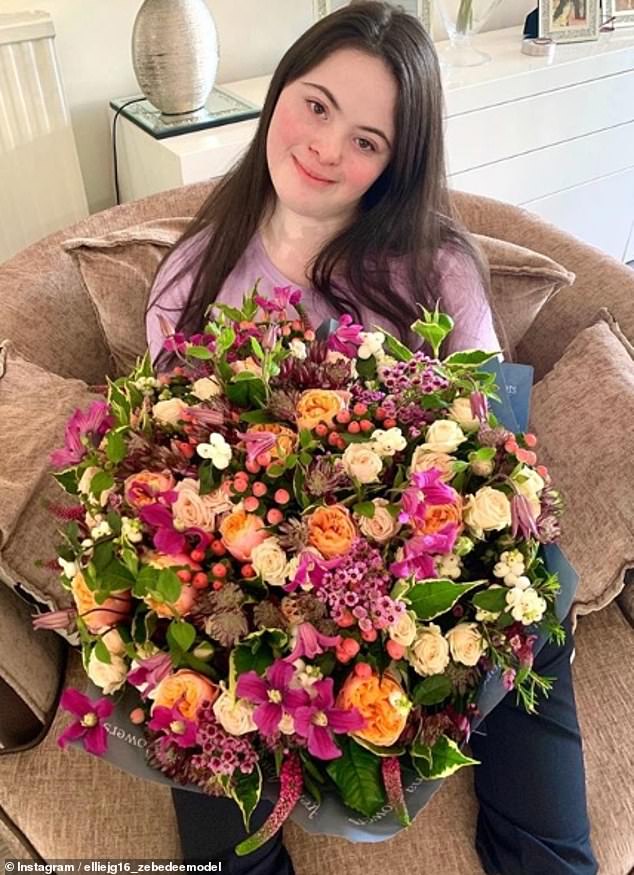 Ellie signed with Zebedee Management, an agency that only represents people with disabilities, three years ago (pictured at home)

‘I have used fashion to reflect my story in the way that shows my personality. I love fashion, makeup and looking amazing.

‘My look is normally bright colours and pinks and purples they show my personality and I like to be fashionable.

She added more needs to be done to champion diversity in fashion, and that there is still a long way to go before models with disabilities became mainstream.

‘Diversity is very important. It seems to be getting better at using disabled models, but I think we are still a way off it being normal to see models like me,’ she said.

‘It seems to be getting better at using disabled models, but I think we are still a way off it being normal to see models like me,’ she added.

Ellie made a splash this summer where she posed for Gucci with Mascara L’Obscur, from the brand’s beauty range.

The snap has been liked more than 865,000 times since it was shared by the brand on its official Instagram account.

After the collaboration with the Italian luxury brand, the model was propelled to the cover of Italian Vogue. 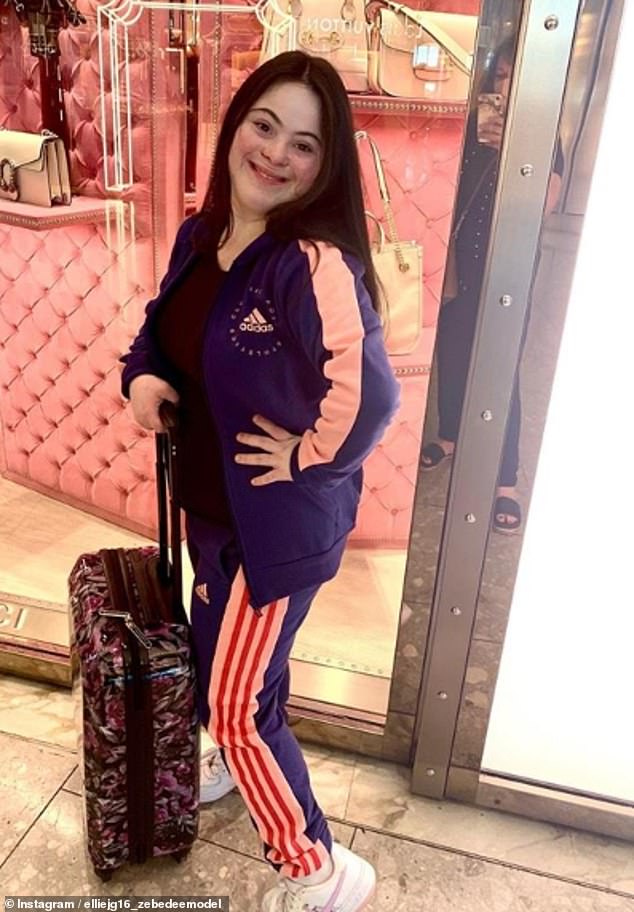 The burgeoning model has already worked with Gucci, Nike, Vodafone, and has appeared in Superdrug’S Christmas 2018 campaign 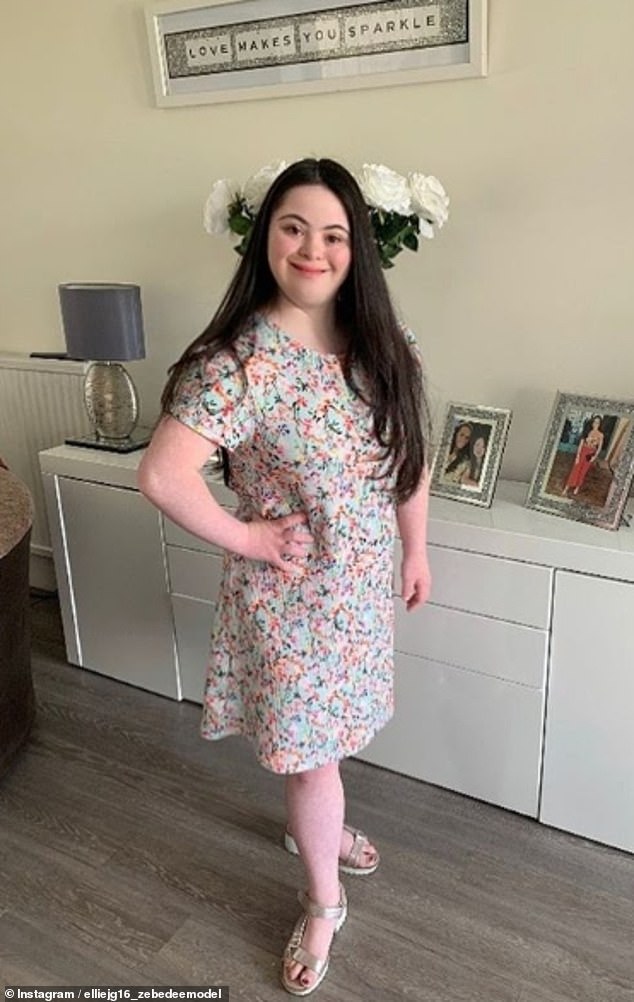 Ellie signed with Zebedee Management, an agency that only represents people with disabilities, three years ago.

The model, who studies performing arts at a college in Redbridge, Essex, has already featured in a number of campaigns, including Superdrug’s 2018 Christmas advert, Nike and Vodafone.

Speaking to You Magazine earlier this month, Ellie’s mother Yvonne recounted how terrified she was after having given birth, when her newborn daughter was swiftly whisked away by staff.

‘We were terrified – we had no idea what was happening – until a nurse said, “We think she might have Down’s syndrome, but we’re not sure”,’ she said.

Once the confirmation came, Yvonne said she was told Ellie would never be able to walk, talk or live an independent life. But the model is now making her way into the mainstream.

WHAT IS DOWN’S SYNDROME?

Down’s syndrome is a genetic condition that typically causes some degree of learning disability and certain physical characteristics.

Screening tests can uncover Down’s syndrome during pregnancy but are not completely accurate.

It is caused by an extra chromosome in a baby’s cell due to a genetic change in the sperm or egg.

The chance of this increases according to the age of the mother.

A 20-year-old woman has around a one in 1,500 chance of having a baby with Down’s syndrome.

There is no evidence women can reduce their chances of having a child with Down’s syndrome.

Down’s syndrome does not have a cure.