Michael Parkinson was so close to George Best he regularly gave him – and his conquests – a bed for the night. But in this moving extract from his new book, he admits he couldn’t stop his friend’s ‘suicidal’ drinking

I first met George when he was 17 and sucking a sweet. It was 1963 in Manchester, and the city tingled with expectation that this footballer with the physique of a toothpick might be something special. I asked him what he thought about his sudden fame, about the sacks of unopened mail cluttering the bedroom in his digs. ‘Very nice,’ he said, and popped another sweet into his mouth.

Over the next 40 years or more, to the time he died, we were friends. I interviewed him more than a dozen times, wrote a book about him, watched his glorious triumphs, visited him in prison.

I interviewed him on his 50th birthday and he tried to answer the question posed in the most famous George Best anecdote of them all: ‘Where did it all go wrong?’ He said, ‘All of a sudden, as a teenager from Belfast, I had to employ three full-time secretaries to answer 10,000 letters a week. I didn’t know how to cope, nor did anyone else. In those days, footballers didn’t have people to protect and advise them.’ 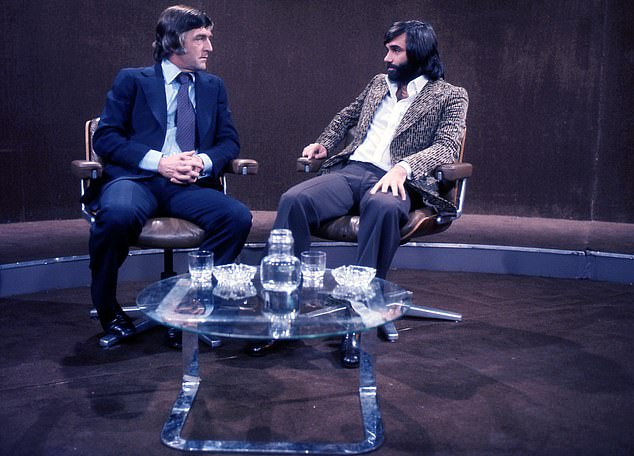 Michael Parkinson interviewing the great George Best in 1975. ‘Best was the greatest player I have ever seen,’ writes Parkinson

‘Genius’ is a word bandied around like confetti nowadays, but it is a description that hangs lightly on those slim shoulders. Best was the greatest player I have ever seen. But he did not arrive as the complete player; he made himself one. He worked on his heading, his finishing and his tackling.

I’ve always wondered what would have happened if George had been in his early 20s now. What would he have achieved in a game that is nowadays virtually a non-contact sport? Lionel Messi and Cristiano Ronaldo might be battling over second and third place in the Ballon d’Or. Imagine Best working with a Guardiola! How much would such a complete player be worth today?

Best’s impact on the game went far beyond his feats on the pitch. A few years before George played for Manchester United, the maximum wage for a professional footballer was set at £20 a week. Footballers were ordinary working men. Until Jimmy Hill stuck his chin above the parapet and won a fight to abolish the maximum wage in 1961, most footballers had second jobs. Even after the revolution there was little that was glamorous about the game. George changed the way football and players were viewed.

I first interviewed him in 1971, but the BBC in its infinite wisdom decided that the first series of Parkinson was not worth preserving. The next occasion was in 1973, when he quit Manchester United for the first time. I asked him about the pressures he faced outside the game after reports that he’d been involved in punch-ups.

‘I don’t go into pubs and walk up to people and ask them if they want a fight,’ he said. ‘If I walk into a bar or a club, there’s always someone who wants to come up and hit you over the head with a pint pot and then go to work on Monday morning and tell their mates. I used to put up with it, but if they’re going to walk up and threaten you, if you smack them in the mouth first, they’re not going to go and tell their mates they sorted you out, are they? It happens everywhere. I’ve been hit over the head by a 65-year-old woman! I was sitting watching a show, and she walked up and hit me over the head with her handbag. I don’t know [why]. Maybe she wasn’t enjoying the show!’ 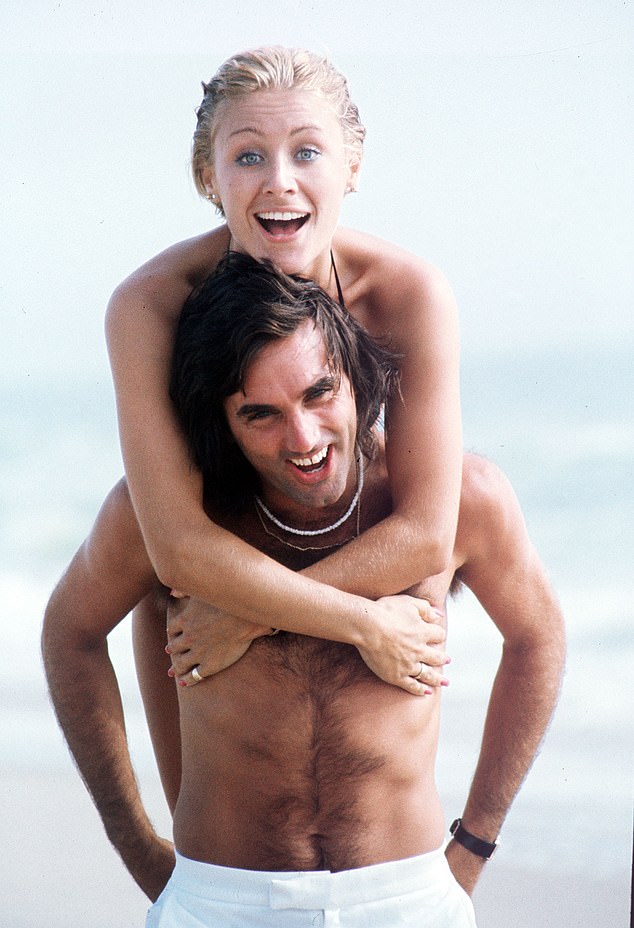 George Best with his first wife Angie in the early Seventies. The marriage produced one son, Calum

Two years later, in another TV interview, he told me why he still lived in digs despite his wealth. ‘I had a house built and moved in there,’ he said. ‘And it was like living in a goldfish bowl. I had day-trippers coming up, coachloads parking outside. I was afraid to answer the telephone. I wouldn’t answer the door. I had to hide in my own house. I got a phone call from the headmaster at a local school once. He said he’d had a couple of young kids come into school that morning, and they were going around swapping the goldfish from my pond. They were getting six Dandys and Beanos for one goldfish. And he wasn’t bothered that they were doing it. He just wanted to check that they were my goldfish. In case they were telling lies.’

It would be eight years before I interviewed him again, and it was at a low point in his life. The American dream had gone sour, as well as his marriage to former model Angie, a marriage that had produced one son, Calum, from who he was now also estranged. His drinking had spiralled out of control to such an extent that he was at last having treatment for alcoholism.

George said then: ‘I became a bad drinker. I think the longest I went was 22 days drinking solidly. Without food. That’s when I figured it was a problem.’

By the time of our final interview, in 2001, he had been diagnosed with severe liver damage and was on a waiting list for a transplant. George was on with David Beckham, then more known for his prowess on the football field than for posing in his pants, building Brand Beckham. 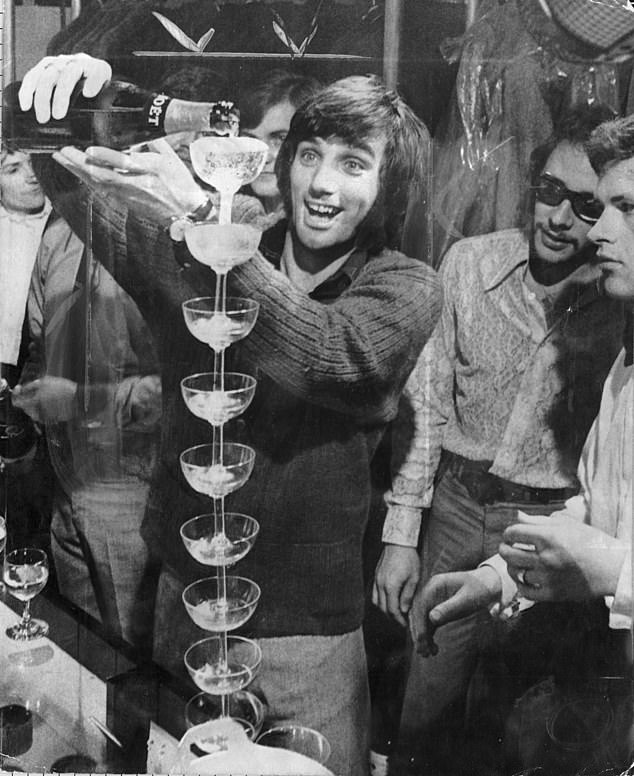 George Best partying in 1969. Michael Parkinson writes: ‘What I soon realised, and I wasn’t the only one, was that George didn’t want saving’

There sat two men – in one chair a young man holding hands with his pop-star wife at his side, certain of his future, secure in himself, while in the other sat a diminished figure, looking older than his 55 years and still struggling to come to terms with himself and finding a way to live.

Of all the interviews, this was the closest I ever got to George being honest about himself. He told me of his lowest point in America. ‘I was desperate for a drink one night, and I stole from a girl’s purse at the bar while she went to the ladies. Then I knew it was something a bit serious, because I’ve never been a dishonest person – or I hope I haven’t. I made up for it. I went back and gave it back to her. But the fact that I’d done it in the first place – I thought, what am I doing here? You know, stealing for some stupid craving that was killing me.’

He told how he had tried to get help but he added, ‘Alcoholics Anonymous works for a lot of people and it saves their lives, but it didn’t work for me.’

He told me that a counsellor once said to him, ‘You have to choose: do you switch the light on or off?’ George chose the latter.

But that didn’t stop me trying to help him. We’d talk for hours about his drinking and self-destructive behaviour, and I tried to persuade him that the choices he was making would only lead him down the wrong road. If ever he was in trouble I would offer him a bed at my house. A double bed, of course, with one side occupied by a different leggy blonde model each time. George would always bring a football and preferred to play with my three sons rather than put up with me trying to advise him.

One time he went to a nightclub and the next morning my wife Mary was making herself a cup of coffee when down the stairs from George’s bedroom walked a young woman in an evening dress, smoking a Balkan Sobranie cigarette. George had brought her home from his night out but had omitted to tell us. She was a nice girl and offered to do the washing-up. Mary thought she might ruin her dress, so the girl, determined to impress, started tottering round the house on high heels doing the hoovering.

What I soon realised, and I wasn’t the only one, was that George didn’t want saving. Matt Busby once said to me, ‘I keep having this terrible thought that one day George will end it all. That he’ll commit suicide.’ He was right. It just took him longer than either of us thought. 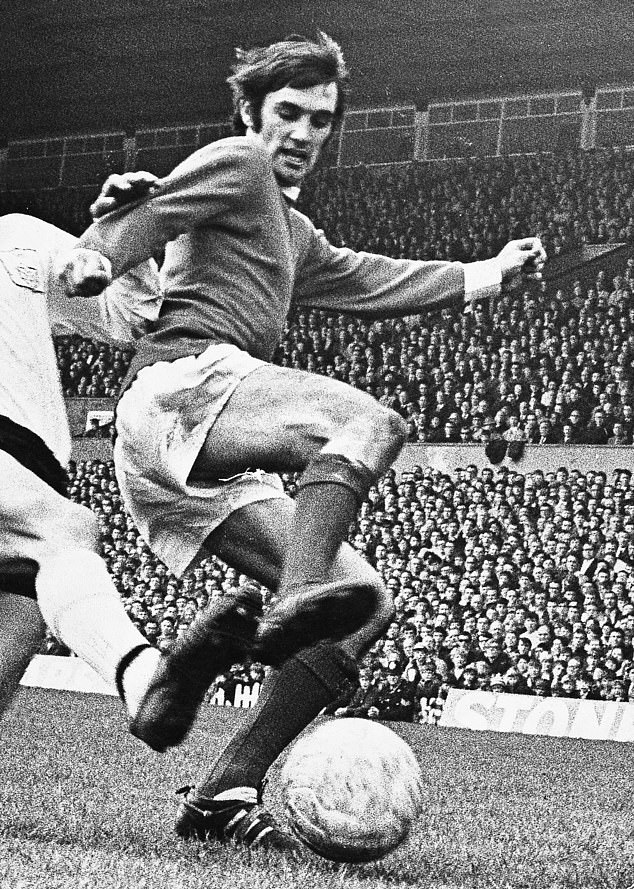 George’s life effectively stopped when he was 27 and he walked out of Old Trafford. He became stuck in a cycle of behaviour

I once asked George if he would change anything about his life. ‘Nothing,’ he said. ‘I’ve had a great time.’ I believe there was something more than just the fact he was suffering from a genetic illness that sprang to life the moment he took a drink. He was an alcoholic. He was one when I was a friend of his in Manchester, but then it is difficult to start pointing a finger at someone when your own drinking is at bacchanalian proportions. I’ve written in the past about my own struggles with drink. There was a time, following my father’s death, when I got so bad that Mary gave me an ultimatum. I, in George’s words, decided to keep the light on. It doesn’t make me a better person, just different. Unlike me, there was something in George that made him not care enough to want to carry on living.

George’s life effectively stopped when he was 27 and he walked out of Old Trafford. He became stuck in a cycle of behaviour. It was as if he was looking for something he had lost and had to keep doubling back to find it before he could move on. He could find no purpose. He didn’t know how to live. His life story has a mythic tone: a young boy touched by the gods, and led to a destiny he had little control over.

‘George Best: A Memoir’ is published on Thursday by Hodder & Stoughton, £20. Offer price £16 until Nov 25. Order at mailshop.co.uk/books or call 0844 571 0640. Parkinson will be appearing at Stratford Literary Festival on Saturday, stratlitfest.co.uk