MILWAUKEE — Republican Gov. Scott Walker is in the race of his career, facing Democrat Tony Evers. Josh Zdroik, deputy political director for Wisconsin’s Republican party, is focused on finding loyal Republicans to vote for the governor.

He took CBS News to their Waukesha field office. Valerie, a Republican phone bank volunteer, said there are plenty of groups making fundraising calls. That’s why Zdroik still has to go looking for voters in person.

Zdroik said the focus is on jobs and wages. But it can be hard to find someone at home during the week. Knocking on door after door and getting no response is normal. 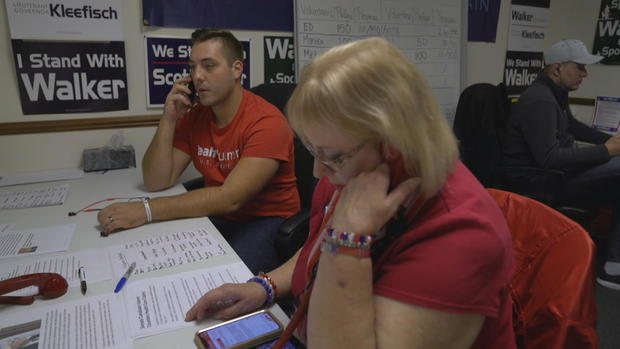 “It’s really up to us to go to these doors and find out are you tuned in, what issues matter to you, how have Republican policies helped you out, and that’s the reason you should go vote,” Zdroik said.

Meanwhile, Democrats remember what happened two years ago. Hillary Clinton was supposed to win in Wisconsin, but she ended up losing by nearly 23,000 votes. So if they want to both defeat Gov. Walker and re-elect Sen. Tammy Baldwin, Democrats need to convince tens of thousands more voters to show up.

“We have amazing progressive candidates that we need to elect in Wisconsin who fight for people regardless of who they are,” he said. 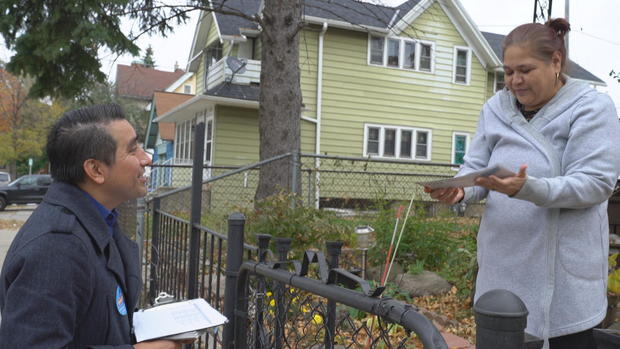 In the days before the midterm elections, Democrats are going door to door in Wisconsin trying to convince voters to show up on Election Day.

In some parts of Milwaukee, the outreach to voters is in Spanish. Tens of thousands of Latino voters sat out the 2016 elections, and Democrats desperately need them. CBS News was with Montes as he handed a pamphlet to one voter, Rhonda Cruz. She said it makes a difference to get the visit in person.

“It’s more personal and you get more insight,” Cruz said.

With billions of dollars spent and millions of campaign calls made across the country, it’s really just one person face to face that both sides agree will win you over on Tuesday.