RICHARD LITTLEJOHN: Don’t be fooled by gimmicks Spread Fear Phil is still here and determined as ever to keep us under the yoke of the EU

Back in 1947, the then Chancellor of the Exchequer Hugh Dalton was forced to resign after leaking details of his Budget to a journalist called John Carvel.

Some of his tax changes, including a penny on a pint of beer, appeared in later editions of the long-since defunct London evening newspaper, The Star, while Dalton was still on his hind legs in the Commons.

His fellow MPs were outraged at this shocking breach of Parliamentary protocol, even though there was no evidence that early disclosure had any effect on the price of fish, let alone the stock market.

Nevertheless, Dalton was obliged to fall on his sword. Three decades later, I found myself working on London’s Evening Standard, alongside — some rungs below, actually — Carvel’s son Robert, the Standard’s political editor. 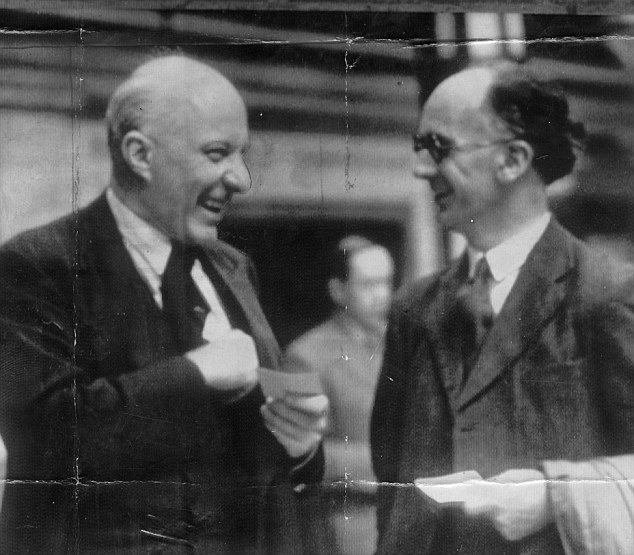 Back in 1947, the then Chancellor of the Exchequer Hugh Dalton (pictured left) was forced to resign after leaking details of his Budget to a journalist called John Carvel 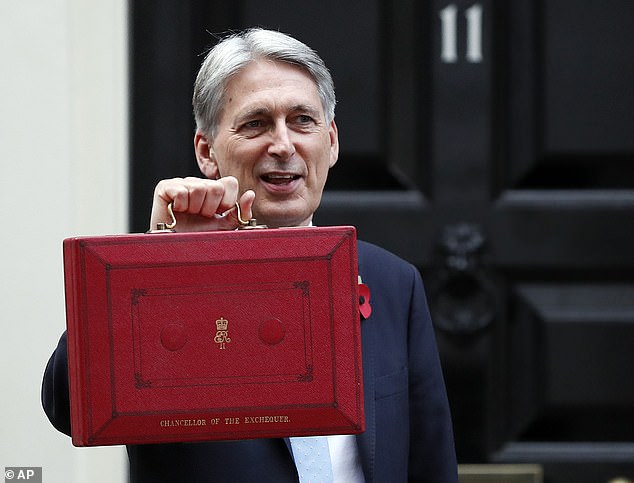 Spread Fear Phil was preening himself all over the TV channels at the weekend, teasing anyone who could be bothered to listen about his plans for the coming year

One of the big set-piece events of Bob Carvel’s year, for which he would fortify himself with a can or two of Carlsberg Special Brew, was Budget Day.

By then, although Chancellors were supposed to spend the preceding weeks in so-called ‘purdah’, selected political editors were spoon-fed a few crucial morsels on the understanding that they weren’t published in advance of the Budget speech.

This gave Fleet Street’s cartoonists plenty of time to prepare their front page illustrations, which were dependent on the theme of the measures being announced.

For instance, if the Chancellor of the day decided to bung the NHS an extra few quid, he’d be depicted as a benevolent doctor in a white coat, complete with stethoscope.

If he froze the duty on Scotch whisky, he’d inevitably be caricatured sipping a wee dram, wearing a tartan kilt and a See You Jimmy bonnet.

Novelty front pages were as much a part of the annual Budget Day ritual as the Chancellor posing on the steps of No 11 Downing Street, waving his red box, which is supposed to contain the closely guarded secrets he is about to reveal to the Commons.

These days you’ll find more secrets inside a box of Black Magic. The modern Treasury leaks like a colander, every year mounting a series of clumsy, stage-managed attempts to soften us up for the good news/bad news in store.

Even the Chancellor himself can’t resist getting in on the act.

Spread Fear Phil was preening himself all over the TV channels at the weekend, teasing anyone who could be bothered to listen about his plans for the coming year. Not for Hammond the strictly-enforced purdah, breach of which cost Hugh Dalton the keys to No 11.

The papers have been full of deliberately placed titbits involving everything from help for the High Street to more money for tree planting.

Today’s Budgets are as much about burnishing the Chancellor’s own political credentials as addressing the nation’s finances.

Why else would Hammond be announcing that all schools and A&E departments are to get dedicated mental health units, apart from the fact that there’s been a well-orchestrated campaign to elevate mental health to the top of the political agenda — so that it is now acknowledged as an ‘epidemic’ which can only be cured by throwing lashings of taxpayers’ money at it?

Not that he’s the faintest idea how he is going to pay for this largesse.

The grand gesture is all that counts. He’s even had the audacity to use his round of pre-Budget briefings to threaten that unless we swallow Mother Theresa’s dismal, defeatist, dishwater-weak Chequers version of Brexit, then all bets are off and we can forget about whatever goodies he announced yesterday.

Don’t be fooled by gimmicks like the commemorative Brexit 50p coin. Hammond and May are determined to keep us under the yoke of the EU at all costs.

No deal, no end to austerity, is the ultimatum from the Chancellor. What does that even mean? We’re supposed to send £39 billion to Brussels when the nation is £1.8 trillion in debt and rising?

I want to scream every time I hear politicians and lobbyists bleating about ‘austerity’.

Why don’t we talk instead about ‘balancing the books’, or ‘living within our means’, or ‘not spending money we haven’t got’, or ‘not borrowing money we can’t afford to pay back’?

Why even bother with a Budget? Most of the fiddling with tax thresholds can be put on the statute book without a great song and dance.

The only ‘secrets’ in Hammond’s red box are the nasty surprises which he will have somehow forgotten to tell the Commons and will only emerge a couple of days later when the dust settles. 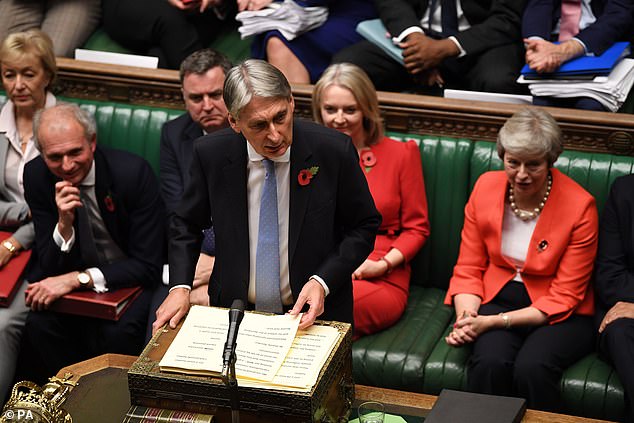 Don’t be fooled by gimmicks like the commemorative Brexit 50p coin. Hammond and May are determined to keep us under the yoke of the EU at all costs

This kind of sleight of hand was a hallmark of Gordon Brown’s time at the Treasury. And, as I have explained previously, Hammond is little more than a third-rate Gordon Brown tribute act.

So I shall continue my habit of reserving judgment on the Budget until it unravels later this week.

Once, a penny on a pint made headlines. Now, who knows how much a pint costs? In parts of London, you’ll get no change from a fiver. Elsewhere a pint will only (only?) cost £3.40. So whatever the Chancellor does to alcohol duty, it won’t make much difference.

As for Hammond himself, he is a political mediocrity who has shamelessly abused his high office to consistently undermine and attempt to overturn the democratic will of 17.4 million people who voted for Britain to leave the EU — no ifs, no buts, no transition period, no backstops, no common rule book, no divorce payment.

If he had a shred of his predecessor Hugh Dalton’s decency, the only statement he should have delivered yesterday was his resignation.

Guy Fawkes Night looms and with it the problem of what to do about pets frightened by the loud bangs from fireworks.

Classic FM believes it has the answer and has prepared a playlist of soothing music designed to keep anxious dogs calm. Apparently, animals are especially responsive to Mozart and Bach.

This comes in the wake of a report, from Glasgow University, which claims playing reggae by the likes of Bob Marley and UB40 to dogs will have the same effect.

This comes in the wake of a report, from Glasgow University, which claims playing reggae by the likes of Bob Marley and UB40 to dogs will have the same effect

That sounds more likely to me. My daughter volunteers at a dog rescue centre in London and tells me that they often play reggae in the kennels.

(You Gotta Walk And) Don’t Look Back, by Peter Tosh, with Mick Jagger, is a particular favourite.

Our old labrador Ossie was a big fan of The Guns Of Brixton, by the Clash, which features a thumping dub bass line.

So if you have a dog and want to be on the safe side this week, try tracking down a reggae version of the Brandenburg Concertos. If all else fails, a juicy bone should do the trick.

It always worked with Ossie.

We need to have Ram Jam banned

Hate preacher Ram Jam Choudary is free to walk the streets again after serving just half of his five year sentence for inciting terrorism.

Naturally, Choudary remains unrepentant in the face of such laughable leniency. Meanwhile, hundreds of jihadi brides and others he encouraged to join Izal are flooding back to Britain.

So what is to prevent Ram Jam picking up where he left off? OK, so he’s being monitored round the clock for the next couple of years, but that kind of surveillance won’t last for ever.

This is, of course, the Islamist rabble rouser linked to the London Bridge terrorists and the men who killed Fusilier Lee Rigby.

How, then, do the authorities propose to stop his murderous mentoring of impressionable young men and women in future? Answer: they’re going to send him on an anti-extremism course.

That should work. Presumably, this is like one of those speed-awareness courses. Write out 100 times: ‘I must stop inciting terrorism.’

Better still, give him community service.

Stick him in a hi-viz jacket and make him pick up the body parts the next time some of his disciples go on a bloodthirsty rampage, killing innocent civilians in the name of his perverted version of Islam.

The blanket 20mph speed limits beloved of the cycle-worshipping, anti-car bigots who run our town halls have had the entirely predictable side-effect of causing congestion and increasing pollution.

But instead of putting them up again, councils across Britain are proposing to lower them still further, to just 15mph.

How long before they turn the clock back to the 19th century and insist that every car is accompanied by a man with a red flag walking in front of it? 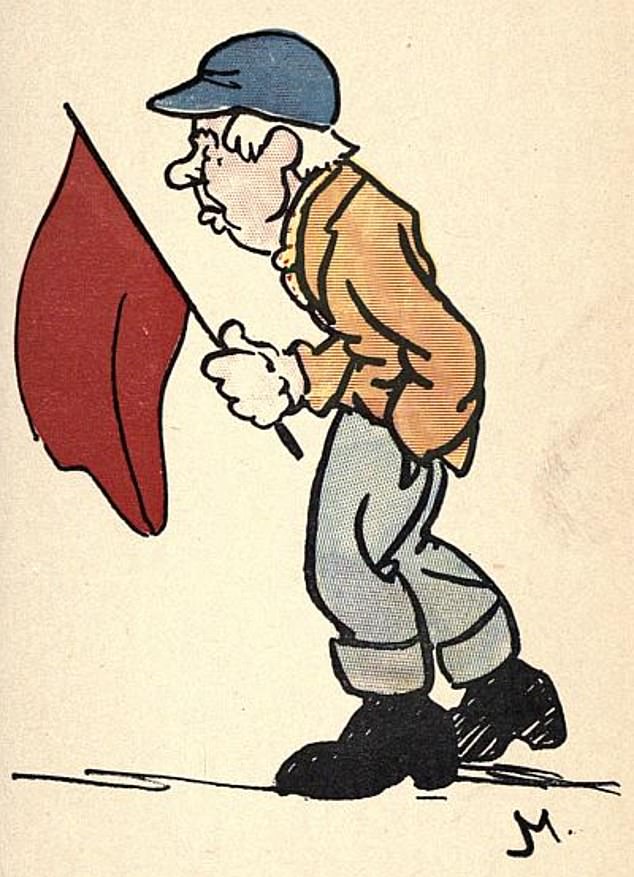 How long before they turn the clock back to the 19th century and insist that every car is accompanied by a man with a red flag walking in front of it?