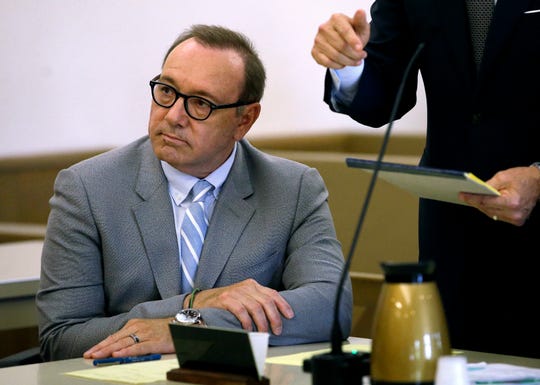 Kevin Spacey at a pretrial hearing on June 3, 2019, at district court in Nantucket, Mass. The Oscar-winning actor is accused of groping a teen in 2016. (Photo: Steven Senne/ AP)

BOSTON  — A man who says Kevin Spacey groped him at a bar on Nantucket Island cannot find the cellphone he has been ordered to turn over to the defense, the accuser’s attorney said Wednesday.

Spacey’s lawyers have demanded the phone so they can try to recover text messages they say would support Spacey’s claims of innocence. Judge Thomas Barrett said earlier this month that the phone must be given to authorities by Friday.

But Boston attorney Mitchell Garabedian told the judge in court documents that the phone used by the accuser at the time of the alleged groping at a Nantucket bar is missing.

The young man and his parents “have searched all the places where such a phone may have been stored. They have not found the phone,” Garabedian said.

The judge is now giving them until the next scheduled hearing in the case, July 8, to produce the phone, or the accuser, his mother and Garabedian must appear in court that day to explain what they know about its whereabouts.

The phone has been a central issue in the case against Spacey, who pleaded not guilty in January to a charge of indecent assault and battery.

The case first came to light in November 2017, when former Boston TV anchor Heather Unruh called a press conference to accuse Spacey of getting her then 18-year-old son drunk and then sexually assaulting him at the Club Car, a popular bar and restaurant on the resort island where her son worked, in July 2016.

It’s the only criminal case that has been brought against Spacey since several sexual misconduct allegations crippled his career in 2017.

A lawyer for Kevin Spacey is accusing prosecutors of withholding information that could help the actor's case. Attorney Alan Jackson accused prosecutors of falsely denying they had access to information about the accuser's cellphone. (June 3)
AP, AP

Spacey’s attorney, Alan Jackson, said at a hearing this month that Unruh told authorities she removed anything concerning her son’s “frat boy activities” from his phone before handing it over to investigators in 2017.

Jackson has said it also appears the accuser deleted certain messages between him and his then-girlfriend from his phone before sending screenshots of conversations to an officer investigating the case.

Tara Miltimore, a spokeswoman for the Cape & Islands district attorney, declined to comment, saying in an email that the “case will be tried in the courtroom not the media.”

Garabedian said in a letter to Barrett that the accuser and his parents have no memory of seeing the phone since it was given to police at the end of 2017. He said police notes indicate the phone was returned to the accuser’s father, but his father doesn’t remember getting the phone back from police.

Garabedian said they are planning to hire a digital forensic expert to search for backup copies of the phone but “it will take a few weeks to identify that information.” Thus, the request to extend the deadline to hand over the phone.