The Duchess of Cambridge mixed trendy designers with high street brands during her royal tour of Ireland – wearing £26,420 worth of new clothing for the brief three-day visit.

Kate Middleton, 38, ticked off some of her go-to designer labels throughout the tour, including Catherine Walker and Oscar de la Renta, as well as some of her favourite high-street brands, like Accessorize and H&M.

But the Duchess also donned new designers, including the trendy brand The Vampire’s Wife, which is loved by royals including Princess Beatrice, 31.

A substantial part of the royal’s total for the tour was a set of stunning new Asprey Daisy Heritage earrings worn as Kate arrived at Dublin International airport, which are worth £17,300. 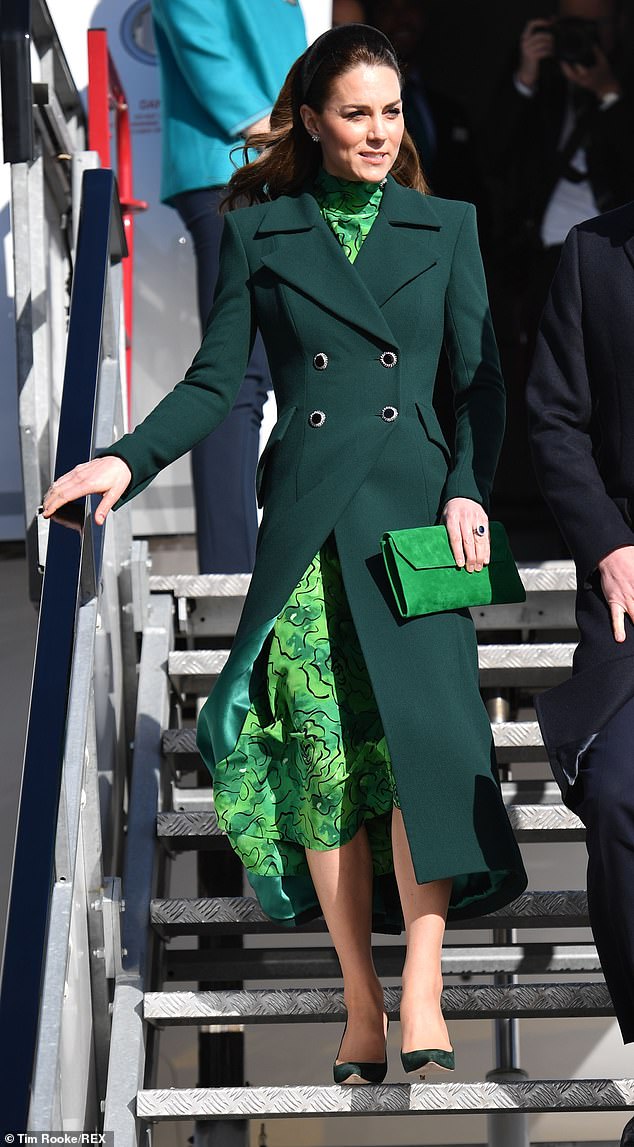 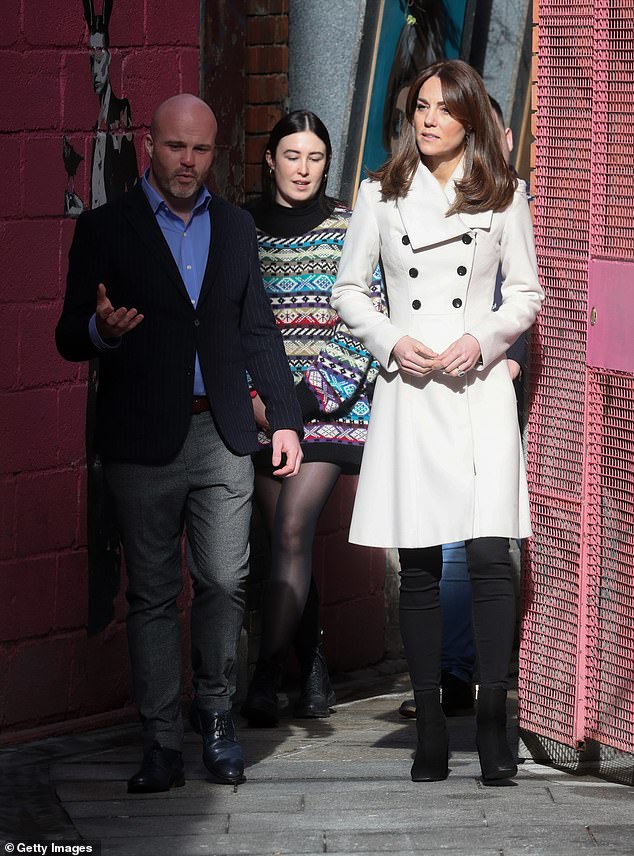 Recycled! The royal rewore several of her favourite items from her wardrobe including a coat from Reiss she first wore 13 years ago

Kate selected the £1,595 emerald gown by designer The Vampire’s Wife for an evening reception at the Guinness Storehouse in Dublin on the first night of the tour.

And it wasn’t the only new brand that the mother-of-three wore while on the tour.

The Duchess also stepped out in a shirt from the new Alexa Chung collaboration with Barbour while visiting a local farm in County Meath. 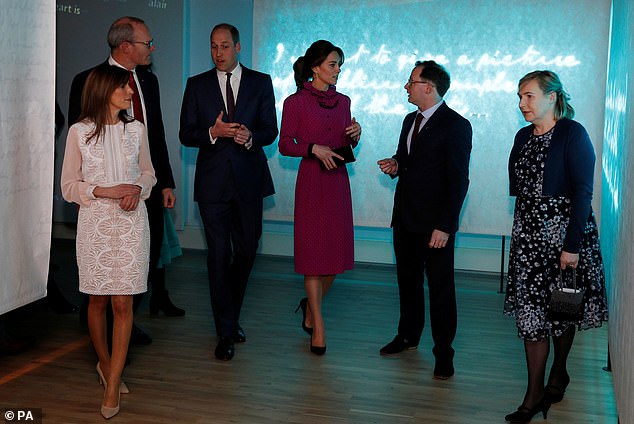 The Duchess of Cambridge opted for a mix of her favourite designers, including Dubarry (left) and trendy new brands like The Vampire’s Wife (pictured right) during the tour

Kate’s vintage Oscar de la Renta on the second night of the tour bore a striking resemblance to a pink polka-dot dress worn by the royal’s Donald Campbell which Diana wore twice for engagements in the 1980s.

Diana first wore the Campbell dress, in pink and white, with a bright pink fascinator in 1983 as she arrived at the Perth Hockey Stadium in Bentley, Perth during her tour of Australia with Prince Charles when she was 22. 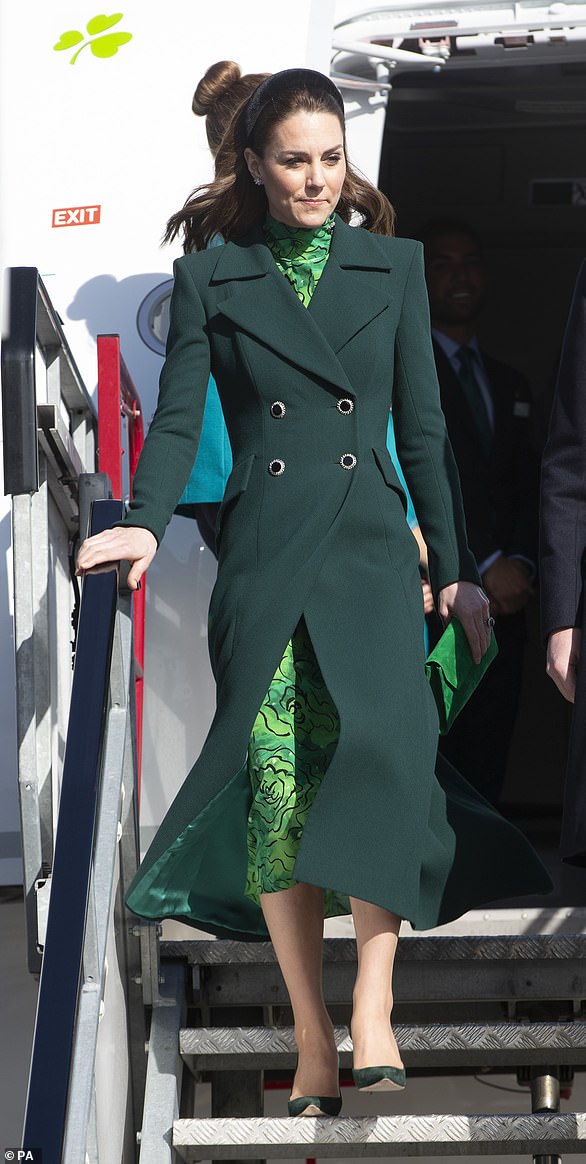 Kate Middleton, 38, donned a bold new £1,567 dress by designer Alessandra Rich as she arrived in Ireland alongside Prince William, 37, 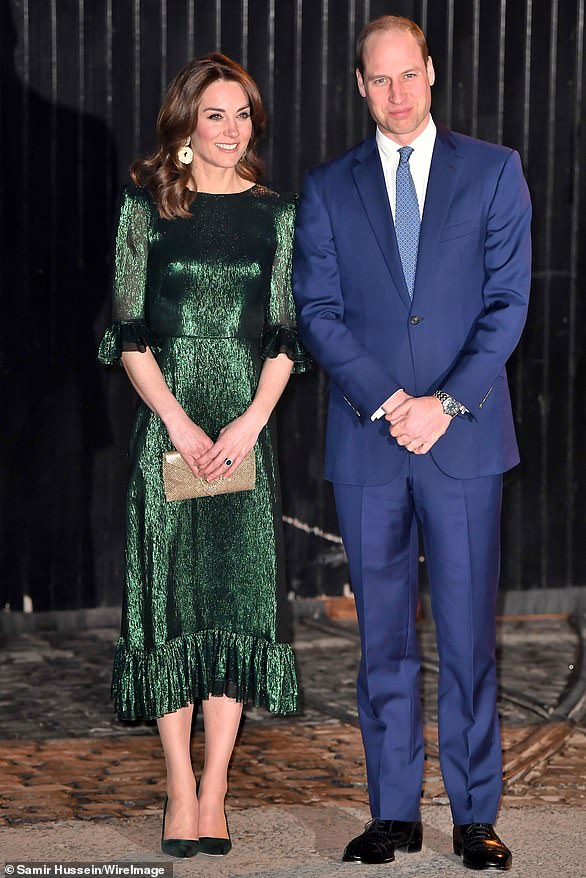 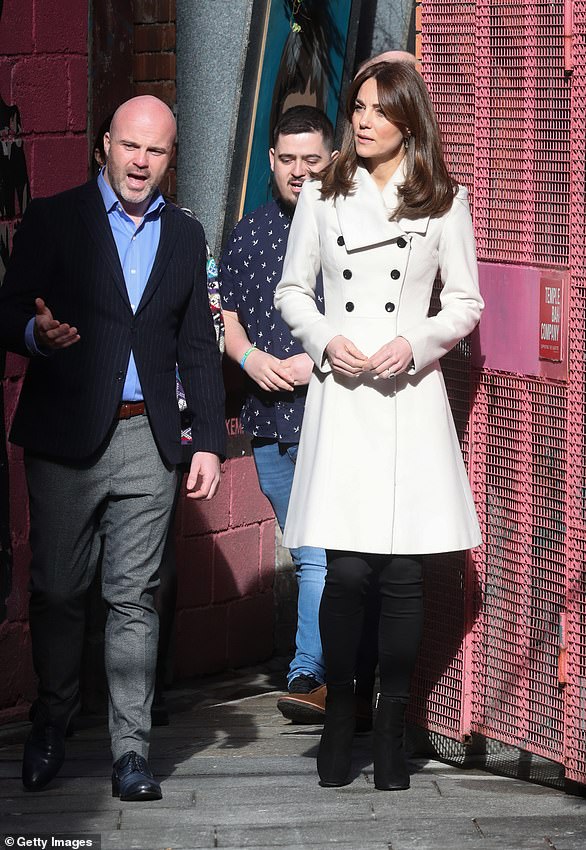 Catherine, Duchess of Cambridge donned a new pair of boots by Russel and Bromley as she visited Jigsaw, the National Centre for Youth Mental Health 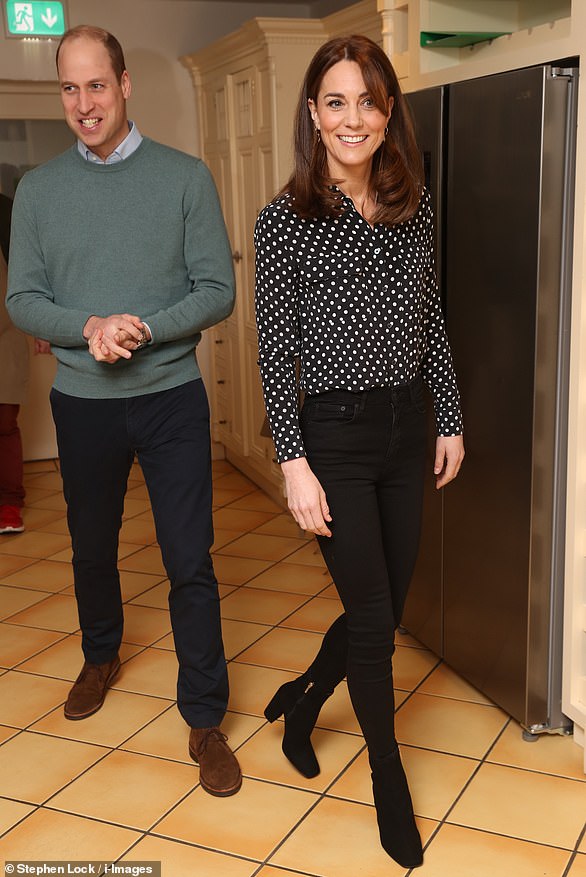 Meanwhile she also wore several pieces of new jewellery while on the tour, including a pair of Shamrock charm earrings worth £100 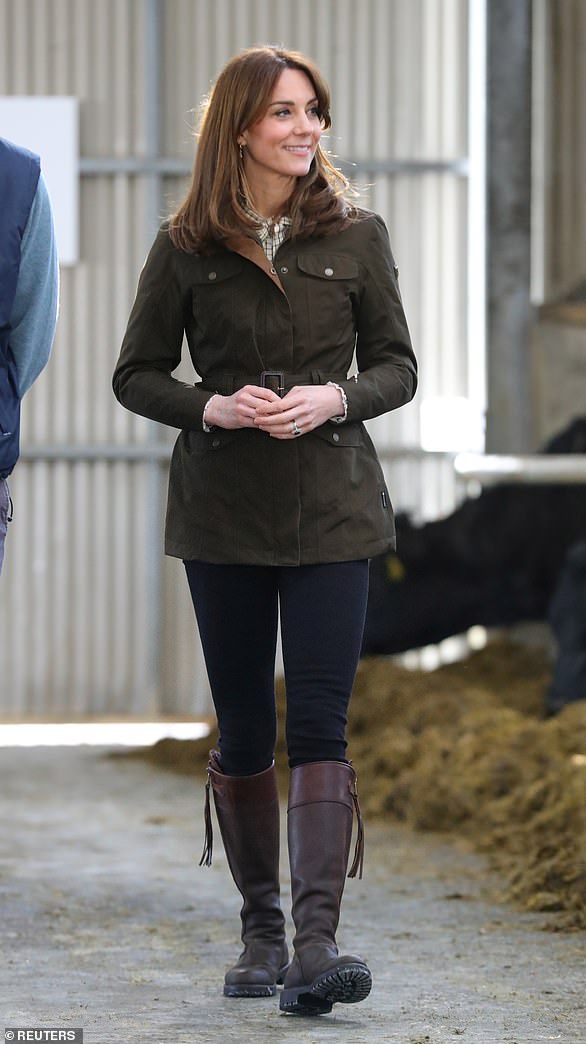 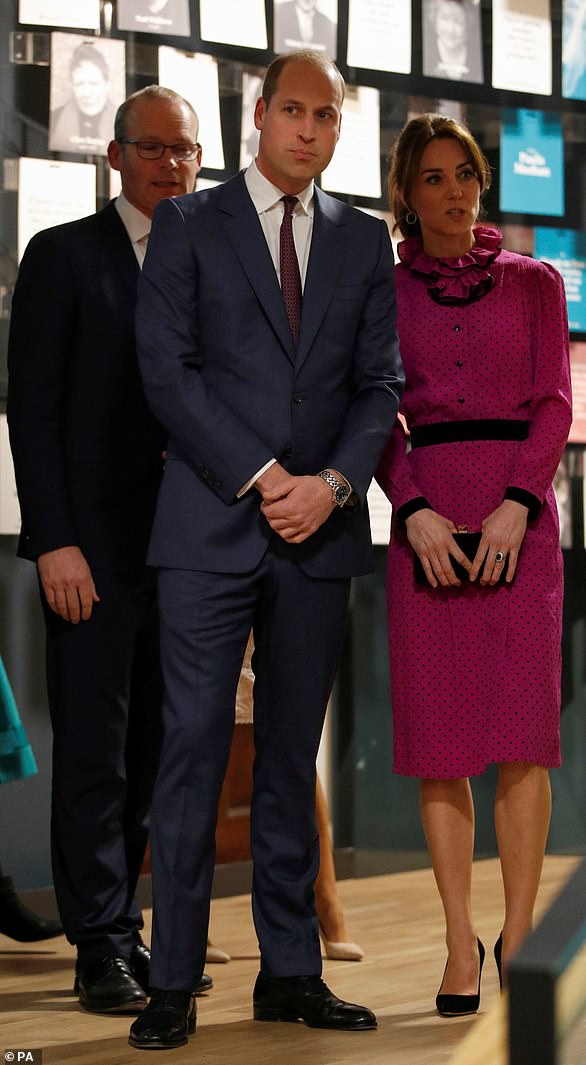 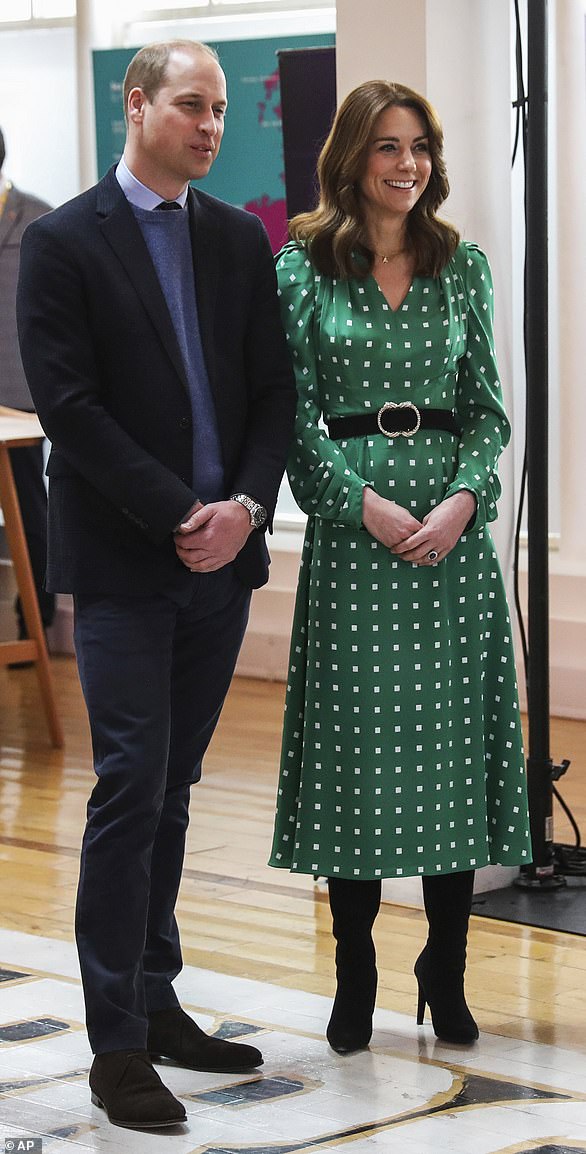 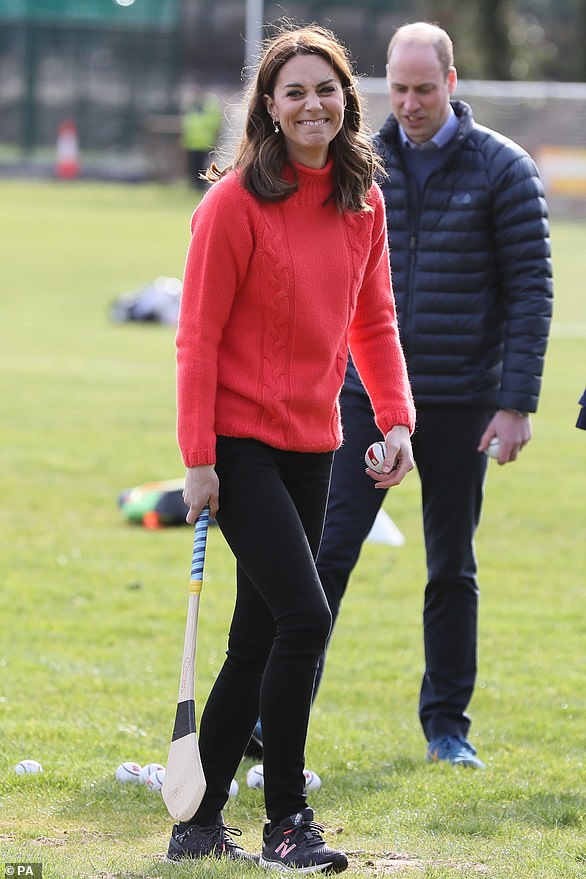