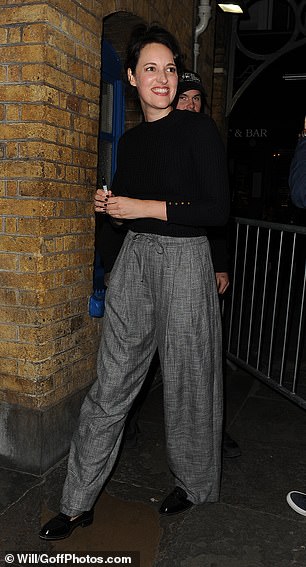 Phoebe Waller-Bridge, pictured after the first night of her production on Tuesday, has returned Fleabag to the stage one last time

Wearing a red jumper, down-home jeans and a pair of loafers, Fleabag has returned to the stage for one last hurrah.

A particularly bad feminist at that. When a lecturer asks who would trade five years of their life to have a ‘so-called perfect body’, Fleabag is still the only woman to raise her hand.

It has been six years, almost to do the day, since Phoebe Waller-Bridge introduced her damaged but defiant heroine at the Edinburgh Festival.

Since then there have been two hit BBC television series, many awards, international fame and a buzz that just won’t go away.

Now Fleabag is back at the Wyndham’s Theatre in London for a sell-out limited run, before the curtain falls forever on the swashbuckling antics of this sexual adventuress.

And at the first preview last night, the unmistakable grip of Fleabag fever was in the air.

Before the show began, fans queued up to have their photos taken next to the theatre’s Fleabag posters, whilst sitting in the packed audience at curtain-up felt like being among the excited members of a Fleabag cult. 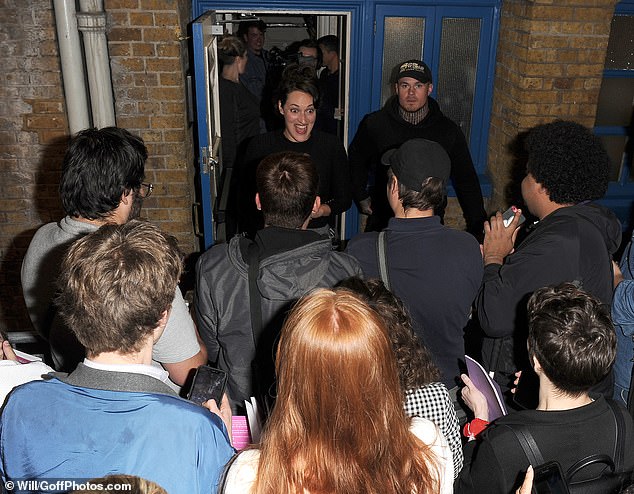 And at the preview, the unmistakable grip of Fleabag fever was in the air. Pictured is Phoebe Waller-Bridge leaving the Wyndham Theatre to take pictures and speak with fans outside

Throughout the duration of the 65 minute show, the Fleabaggers were transfixed, they were delighted with themselves, they were high on the giddy joy of simply being there – and managing to secure one of the hottest tickets in the capital.

They laughed during Fleabag’s jokes, they laughed after the jokes, sometimes they even laughed before the jokes. Which was to be honest, a bit annoying.

At least the show was brilliant, as you might expect. This is the embryonic unplugged Fleabag, the one-woman show which begat the hit series that came later.

But if the story was familiar, at least the retelling of it was entertaining. Sitting on a red chair on a bare stage, Waller-Bridge proved to be an accomplished live performer, here called upon to act out the roles of her sister and her father and even her hideous brother in law, Martin. 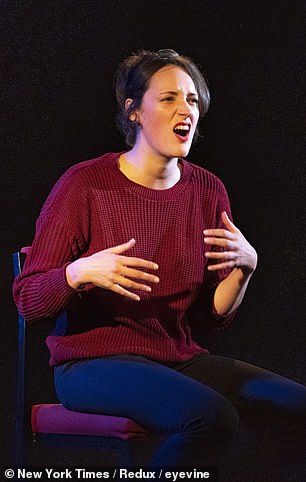 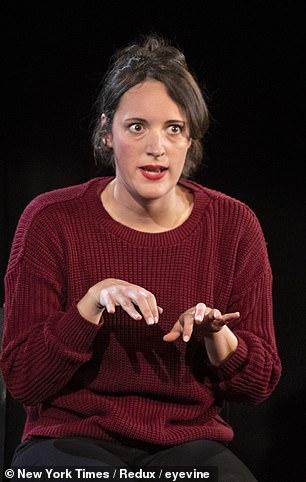 Phoebe Waller-Bridge has returned Fleabag to the stage for one last time, almost six-years to the day since the writer introduced her damaged but defiant heroine at the Edinburgh Festival 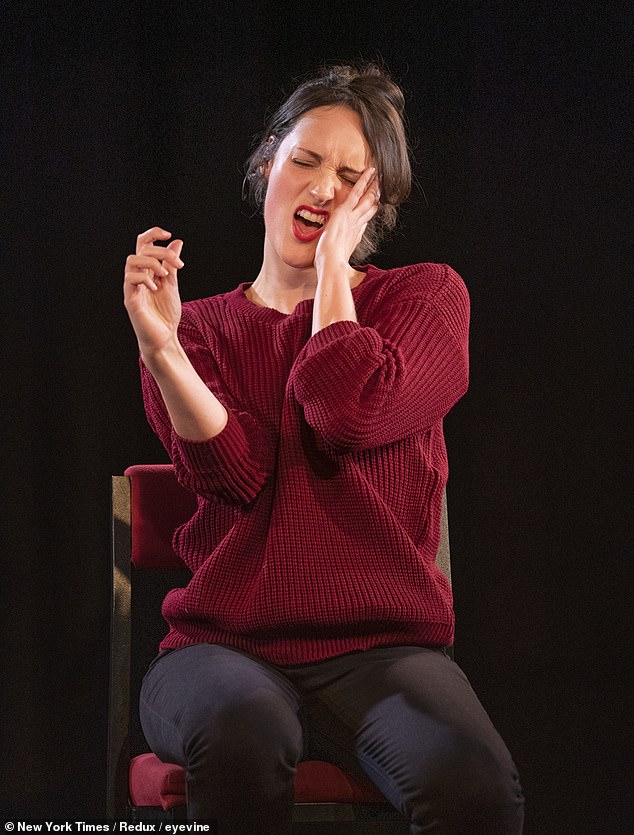 What is interesting with this bare bones production is, in all its starkness, the emotional precision of Phoebe Waller-Bridge’s writing, plus her winning, quicksilver performance

It was a bit of a shock to discover that she had originally envisaged him, with all his disgusting perversions and damp hands, to be Scottish.

We were treated to the jumper and bra gag and much cheery talk of the guinea pig themed café and references to the death of her beloved friend, Boo.

There was an early stumble on the script. ‘I’m sorry, I’ll do that again,’ said Waller-Bridge before reminding everyone of her best lines.

He packs up his clothes and takes all the food from the fridge. ‘I was thrilled by his selfishness. Suddenly I fancied him again,’ she said. 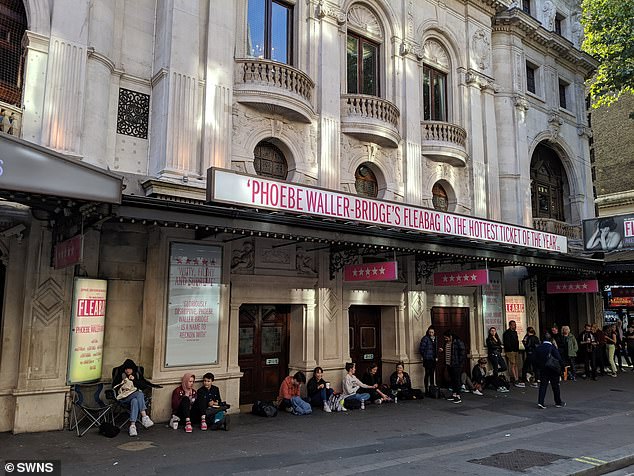 Fleabag is at the Wyndham’s Theatre in London, pictured, for a limited run. Fans queued up to have their photos taken next to the theatre’s posters before the show started

There are moments in Phoebe Waller Bridge’s monologue when she comes across like that arch-klutz Miranda and even sounds, now and again, like Victoria Wood.

But as the evening progresses we discover that not everything in Fleabag’s life is quite as funny as she pretends, and that her grief and guilt are never far below the surface.

What is most interesting is that with this bare bones early production we can see, in all its starkness, the emotional precision of Phoebe Waller-Bridge’s writing, plus her winning, quicksilver performance.

‘I have a horrible feeling,’ she says, ‘that I am a greedy, perverted, selfish, apathetic, cynical, depraved, morally bankrupt woman who can’t even call herself a feminist.’

No wonder so many women remain adoring fans, Fleabag speaks to everyone who worries how to be, and also how to be enough. No wonder the cult absolutely loved it, roaring their approval at the end.