Filmmakers easily get typecast, but Nisha Ganatra is an extreme case. Just last year, she made Late Night, with screenwriter Mindy Kaling as a new member of staff at a fictional American talk show, and Emma Thompson – the host of the show – as a celebrated comic past her peak. 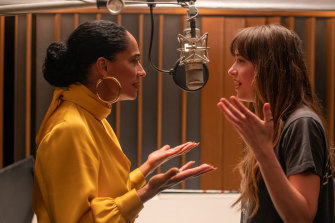 Tracee Ellis Ross and Dakota Johnson in The High Note.Credit:UPI

Ganatra's new comedy-drama The High Note has a different writer, Flora Greeson, and is even shorter on laughs. But the set-up is identical: two women in showbiz, one an ambitious newcomer, the other a legend in need of a professional makeover.

The up-and-comer here is Maggie Sherwoode (Dakota Johnson), who has been working for the past three years for R&B singer Grace Davis (Tracee Ellis Ross), a household name who hasn't released a new album in 10 years and is on the verge of being put out to pasture.

Maggie is Grace's personal assistant: that is, her general dogsbody and occasional unlicensed therapist. But she's also a lifelong music obsessive who hopes one day to work as a producer. In her spare time she remixes her boss' tracks – and we assume that sooner or later she'll get her shot, even if Grace's no-nonsense manager (Ice Cube) prefers to play things safe. 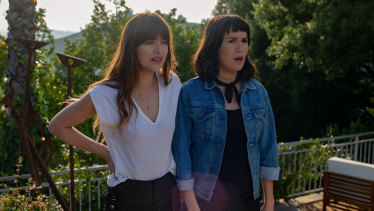 Johnson with Zoe Chao in a scene from the movie. Credit:UPI

The unlikeliness of Maggie as an R&B savant is the joke of the film, to the degree it has one. I keep having to remind myself that Johnson isn't British: she projects the self-deprecating privilege which is the keynote of comedies in the Richard Curtis vein, with a studiously unfussy wardrobe and a smile that says "I know this is all terribly awkward".

She's accident-prone, too, the way "career girls" in Hollywood chick flicks used to be a decade ago – spilling coins on the ground as she jumps into a sports car so she can be on time to pick up her boss from her private plane.

Grace is a more interesting figure, in part because Ross makes no effort to be ingratiating. She's a big personality, with dramatic eyes and a rich laugh, but she also holds herself aloof in a manner which is credible of a showbiz professional. (It may help that Ross is Diana Ross' daughter.) Credible, too, is her self-absorption, presented for the most part as neither endearing nor comic nor especially regrettable, simply a fact of life.

Ross also does her own singing, though we don't get all that much of it. Even her onscreen presence is intermittent, especially in the film's first hour, much of which lingers on tedious flirting between Maggie and David (Kelvin Harrison Jr.), a well-heeled aspiring singer she meets at the supermarket and uses as a guinea pig to test out her producing skills.

Things pick up once Maggie's ambitions come out in the open, and Grace in turn loses her professional cool for long enough to let off some truth bombs: "Only five women over 40 have ever had a number one hit, and only one of them's black."

It's a key moment, given that Maggie's position as a white woman operating in a mostly African-American world is something of an elephant in the room. While Ganatra and Greeson avoid labouring the point, they're very aware of the pitfalls of making Maggie into Grace's saviour: their heroine has to be told repeatedly to check her privilege before things start to go her way.

But the film is one part didacticism to three parts fairy-tale, with a last-minute twist that relies on melodramatic coincidence (and seems largely unnecessary, though not unwelcome). The cinematographer Jason McCormick sprinkles in transitional shots that can only be described as Instagram ready, both in the fancier settings and in Maggie's relatively modest apartment with its balcony looking onto the city: even the LA smog seems like part of the soft glamour.

While Maggie eventually proves her competence as a producer, there's no attempt to suggest that her work is especially brilliant or groundbreaking. Nor could any claim remotely like that be made for The High Note. But all goes down easy, including the music – even if you might wish for just a little more spark.