Scandi chic in Manchester! Swedish owner brings grotty 1970s house – with an avocado bath suite – into the 21st century with a stunning top-to-bottom makeover – and it’s now the most luxurious home on the street

A couple have revealed how they transformed a very ordinary 1970s house in Manchester into their dream pad – complete with an under-the-stair reading nook, beautiful pergola and a stunning kitchen.

Instagram account Inside number 8, has earned more than 70,000 followers with photos documenting their huge renovation of the dated home.

Now a vision of white walls, clean lines and elements including honeyed wood and polished natural stone, the property’s on kitchen – in on-trend charcoal grey – has even been used to film with a top chef.

Swedish owner Victoria, who’s lived in the UK for more than 25 years, and her partner have won buckets of praise from impressed fans over how the house has managed to shrug off its previously dated look – kicking to the kerb terrible carpets and a mountain of white PVC. 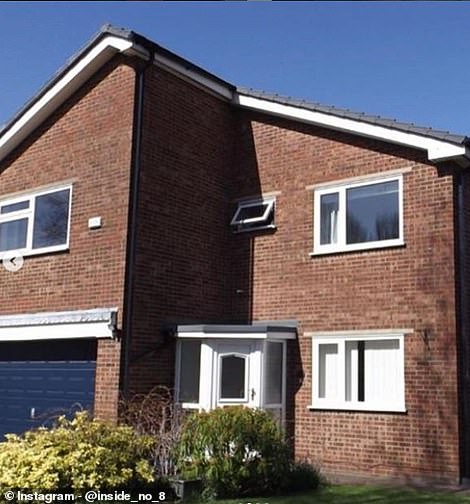 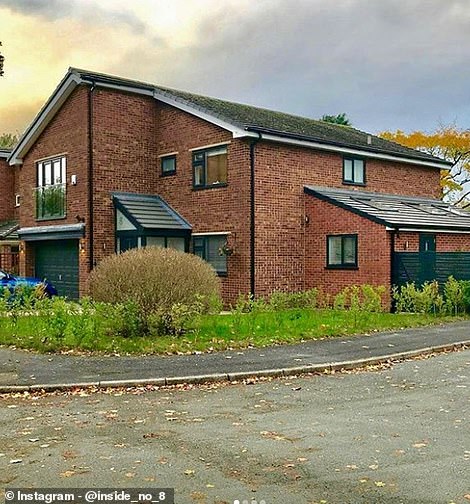 The roomy home was firmly set in the 1970s, with a PVC porch and a very dated interior. Right: the property as it looks now, with fashionable black windows and a side extension, which now houses the kitchen and dining room area 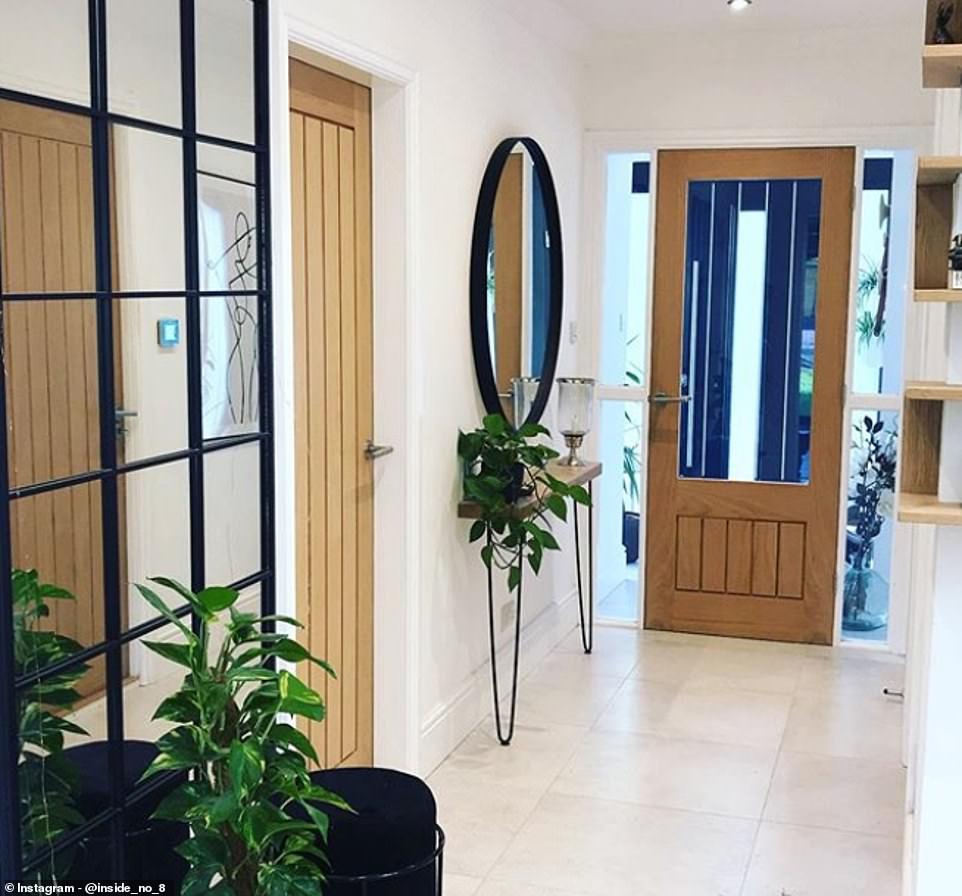 Light and airy: natural stone and light oak doors have made the home both welcoming and firmly in fashion, with a crittal-style window-mirror and a home-made console table among the highlights 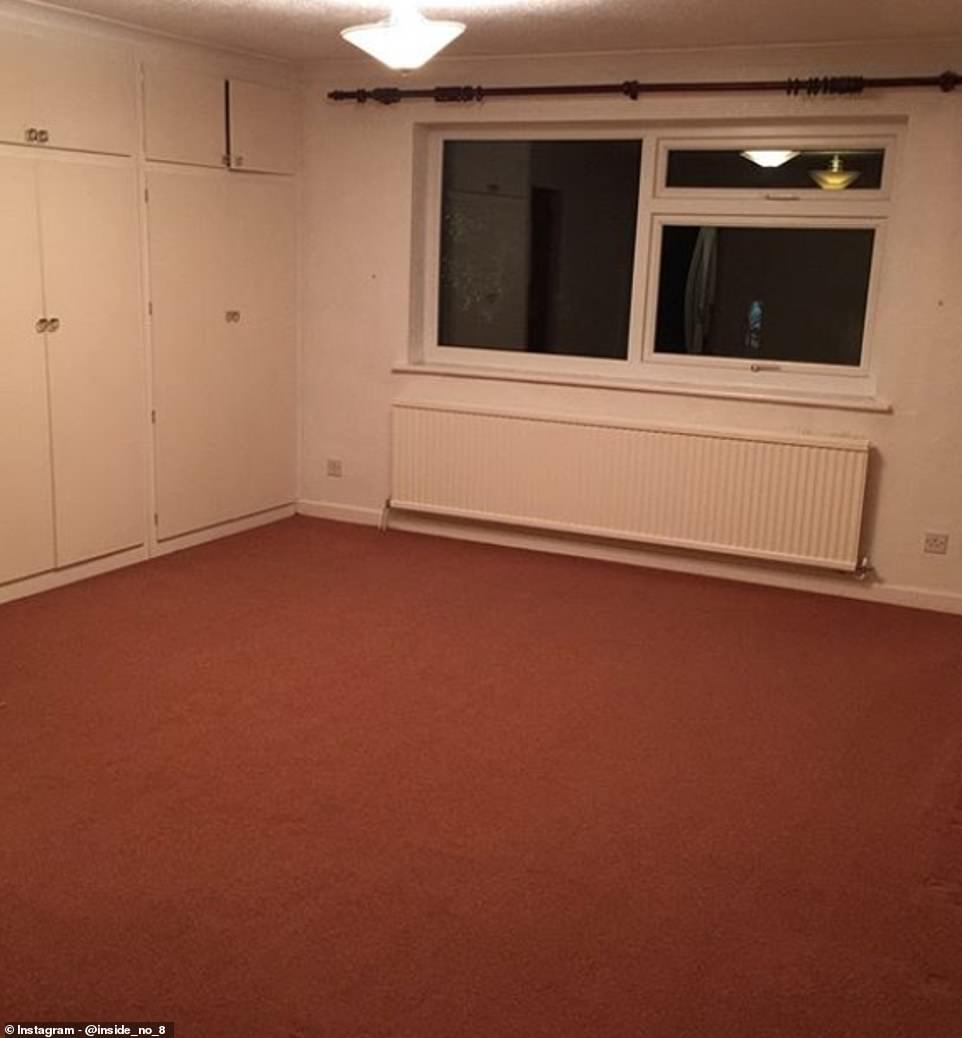 Not so in the pink: dated MDF white fitted wardrobes and a grotty carpet were in place when Victoria moved in 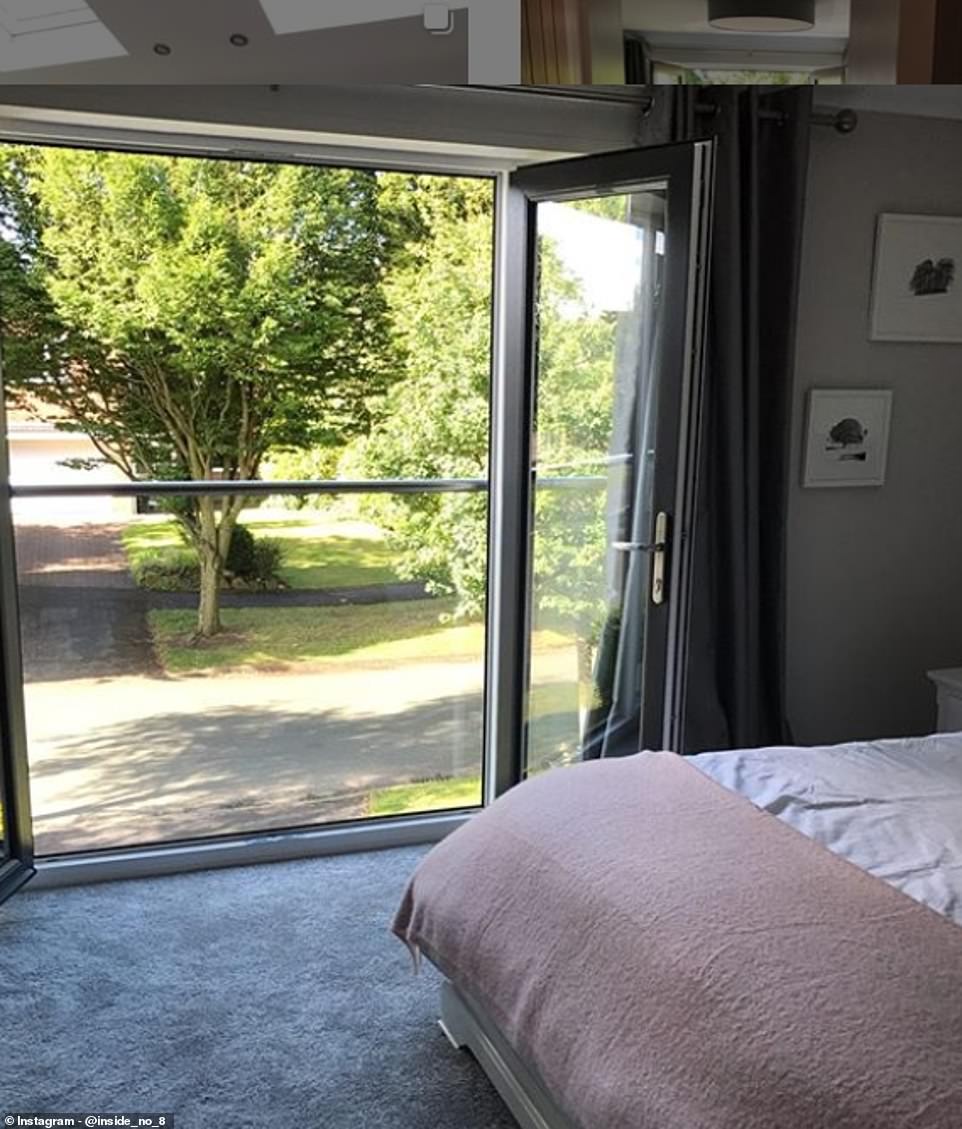 French doors and a juliet balcony have transformed the bedroom, with light now flooding into the property

Photos of what the house looked like before reveal time warp decor, with a deep pink carpet in one of the bedrooms and and plenty of dated MDF white fitted wardrobes.

The staircase and entrance area was cloaked in a chocolate brown carpet, and the doors were a deep – and dingy – hue of brown varnish.

The owners, who extended the property after moving in to transform the space into an open plan living room, dining area and kitchen have installed underfloor heating throughout to ensure the house stays toasty in winter. 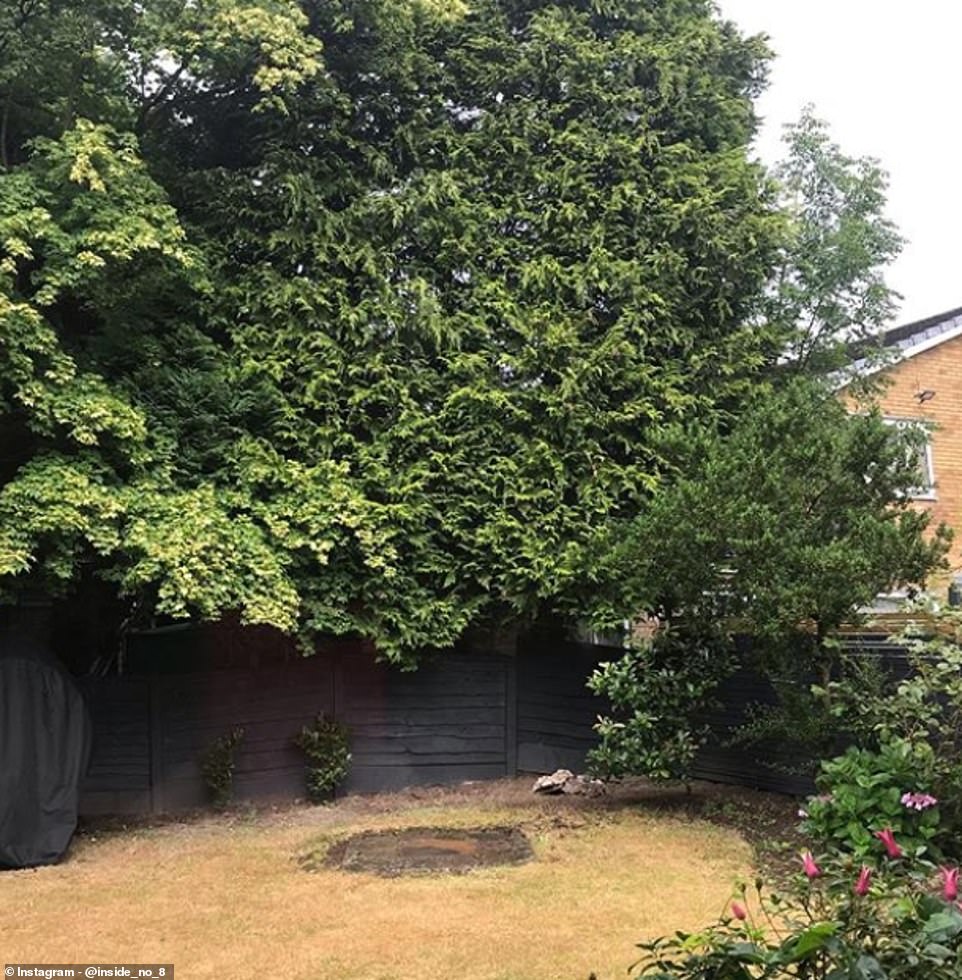 A barren-looking lawn was the house’s main green space, something which has now been landscaped to include a patio and pergola 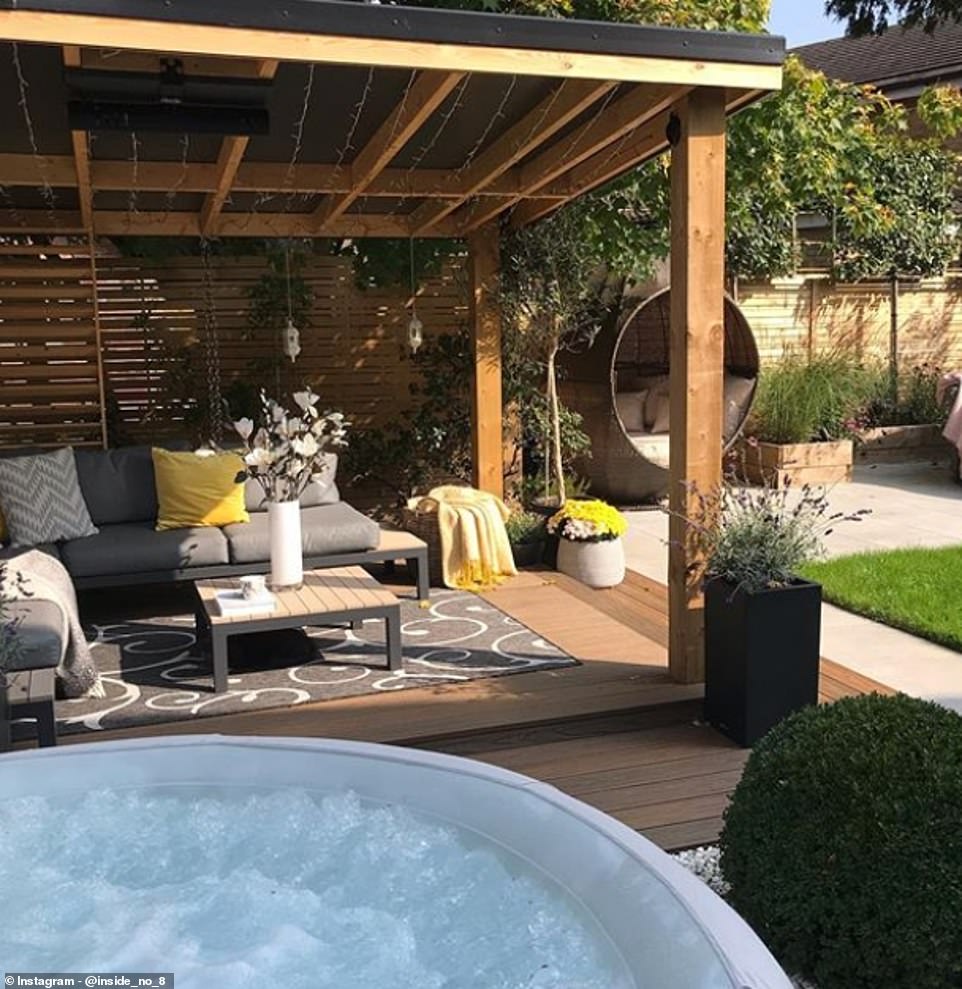 A dip in the tub followed by a nap on the corner couch; the property’s exterior has been transformed by clever partitioning

When it comes to decor, there’s a mixture of high street and independent brands, with Next, Soak, Laura Ashley and Ikea – a nod to the Victoria’s heritage – all featuring.

The garden is also unrecognisable from the patch of grass shown in the before photos, with a pergola – complete with corner couch – and decking area now covering the garden space, and an inflatable hot tub also installed for outdoor soaking. 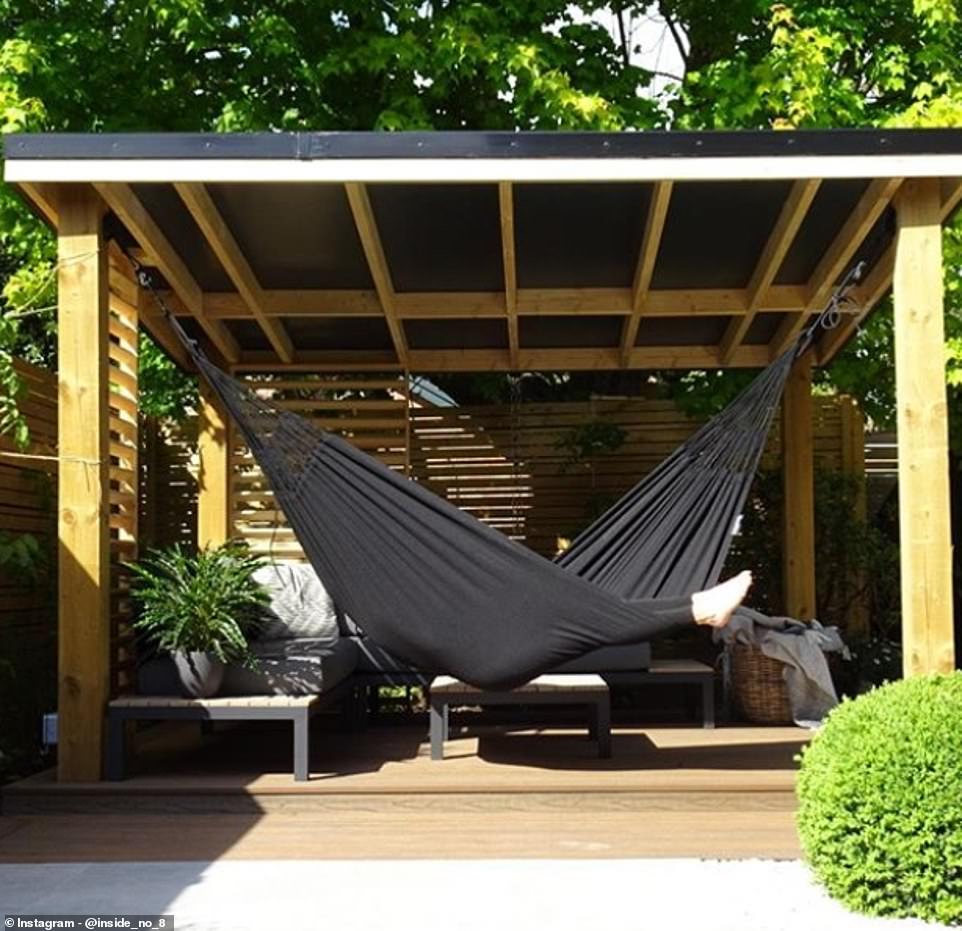 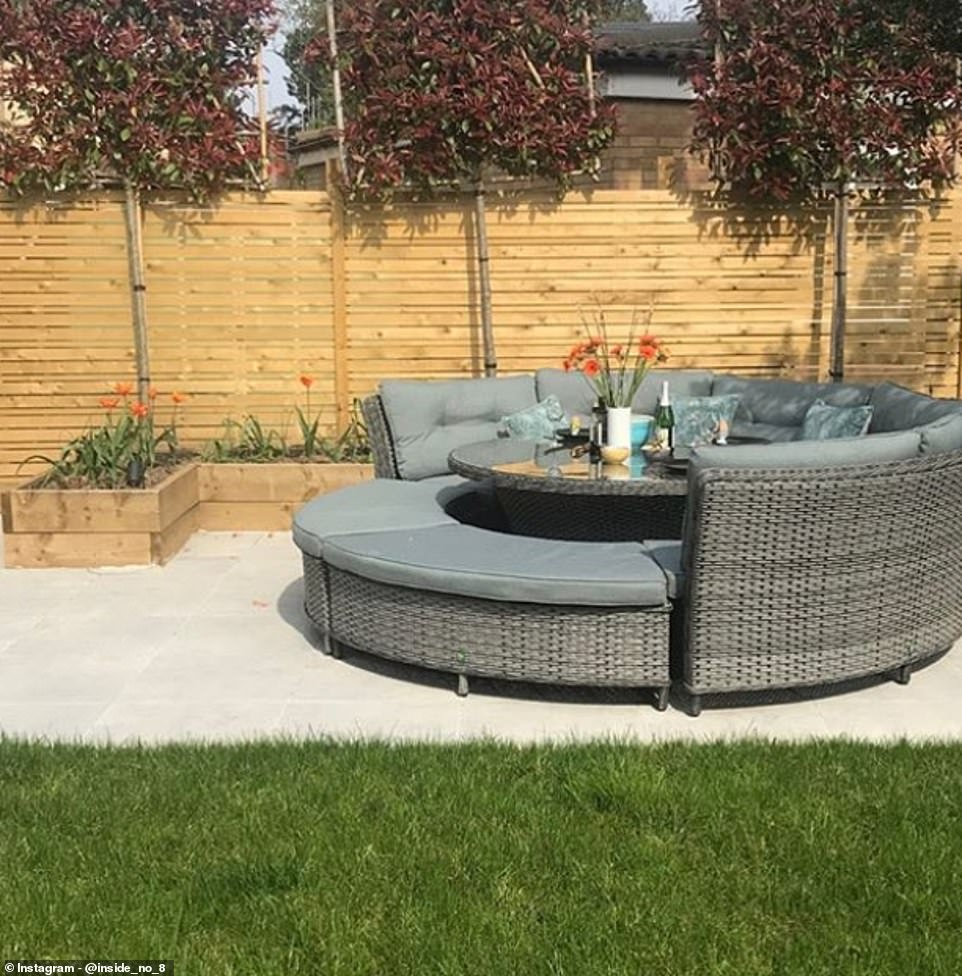 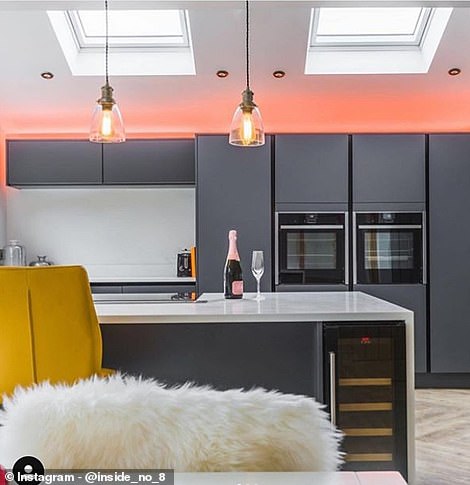 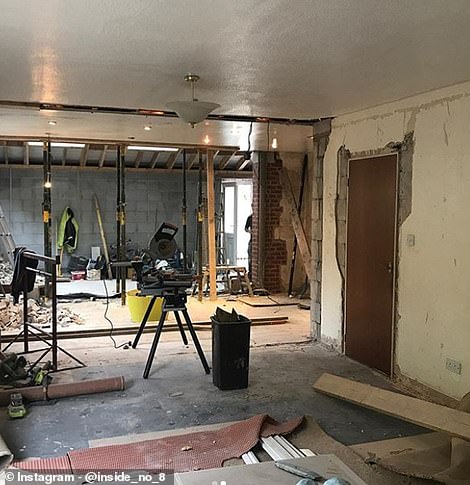 The kitchen as it looks now, in on-trend grey with orange mood lighting. And as the space looked mid-extension, after number 8’s owners began work… 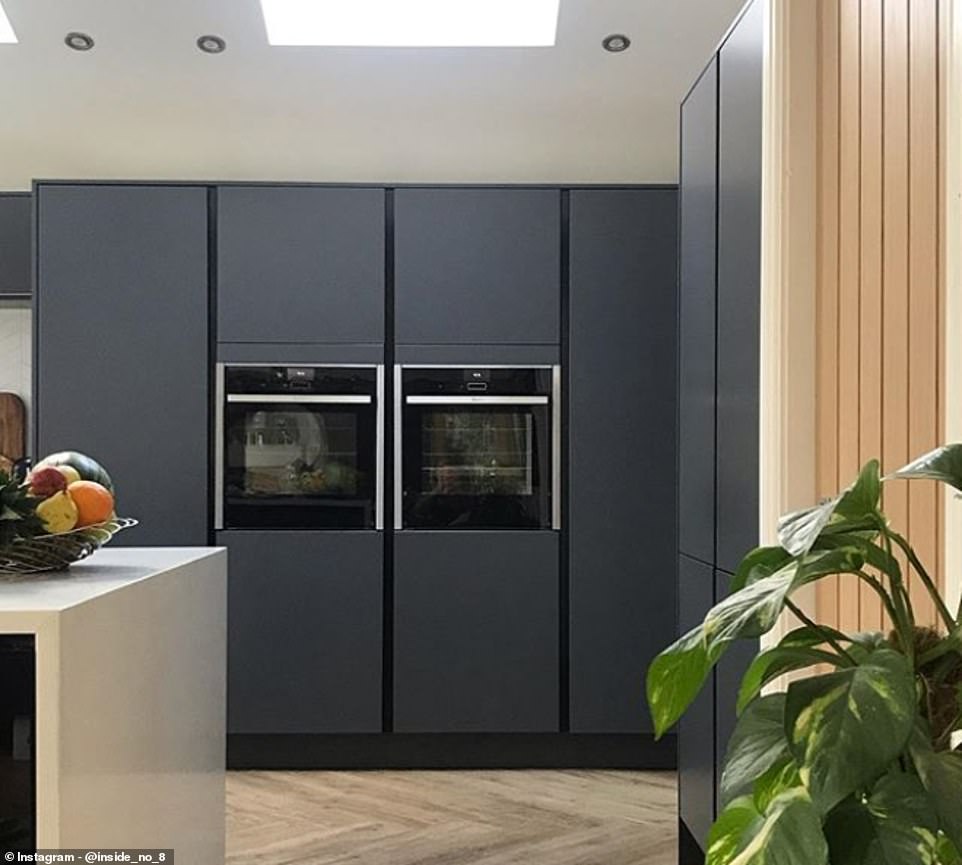 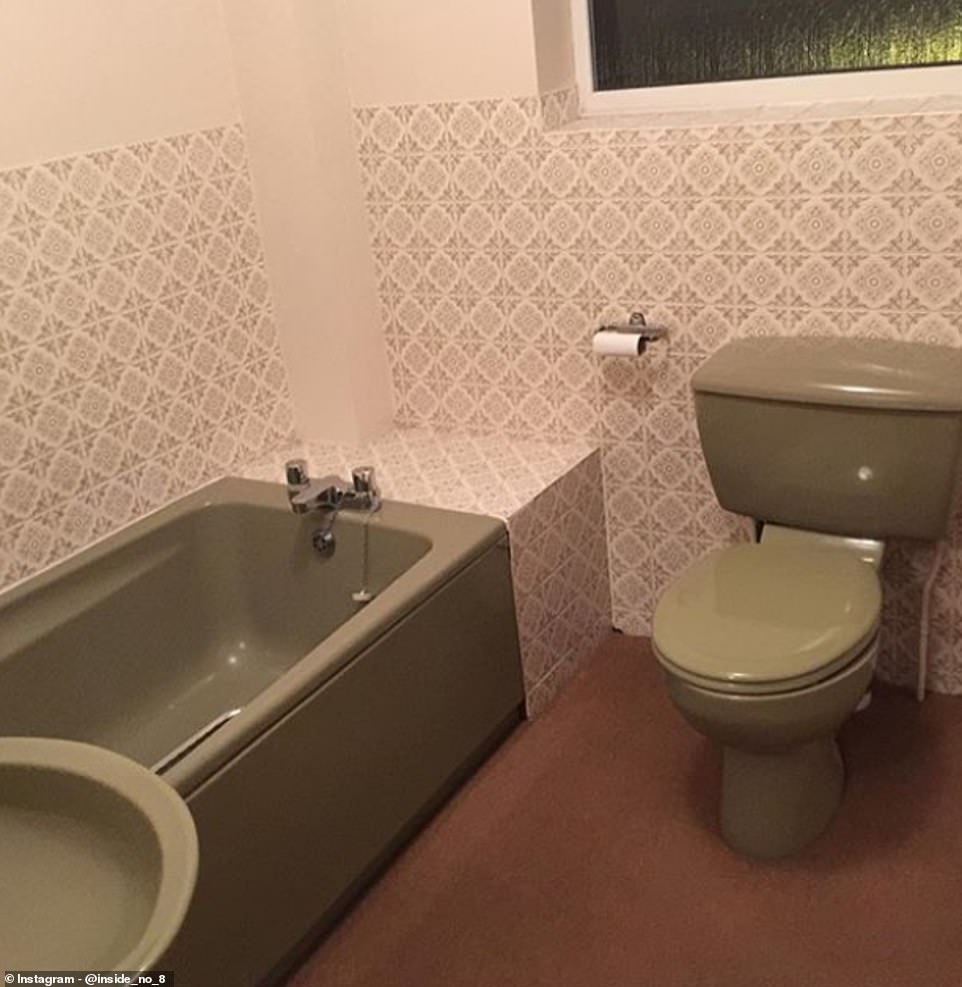 Time to go, avocado…the previous decor – all the rage in the mid seventies – was quickly dispatched to the rubbish tip when the couple decided to make over the property 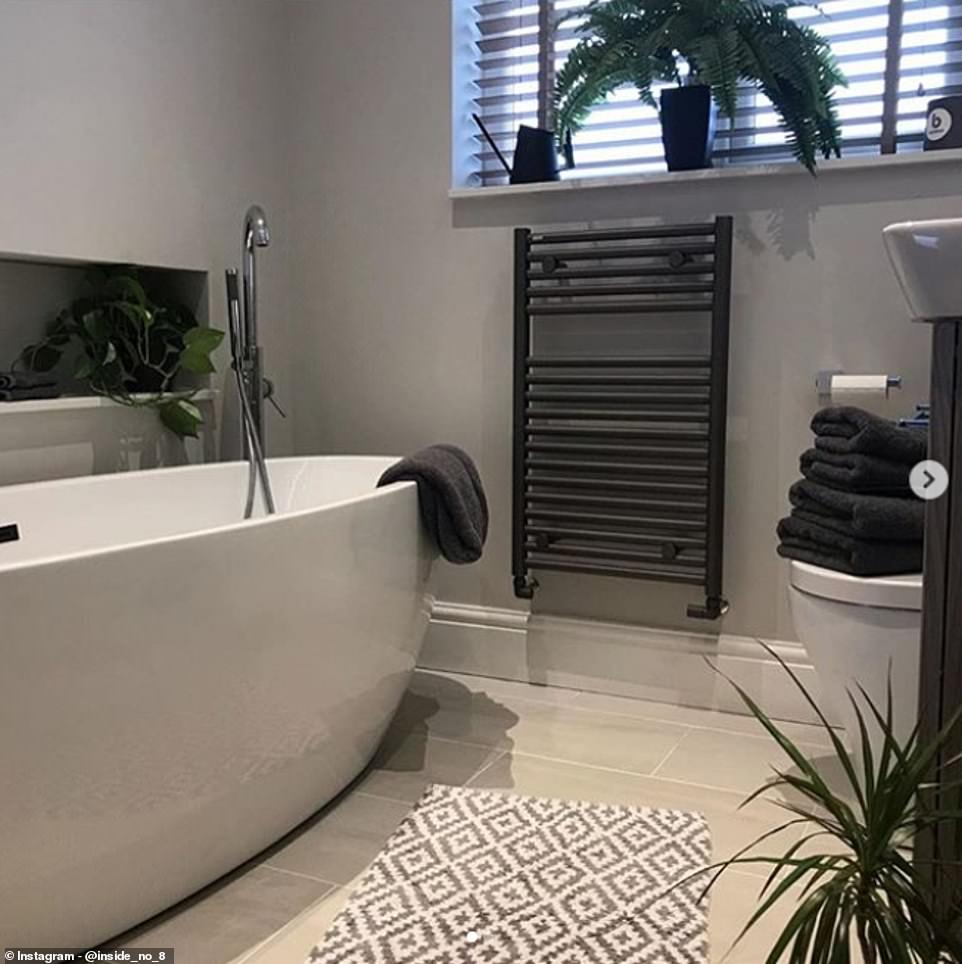 A shimmering black radiator and grey tiles, alongside a very inviting deep tub have made the old bathroom a distant memory

The couple’s Instagram photos also regularly see cats, smoky and tiger, making an appearance and they weren’t forgotten in the renovations with a cat flap making it into the designs.

Some of the swish decor has seen the couple using their own DIY skills, with a chic console table in the hallway made by themselves. 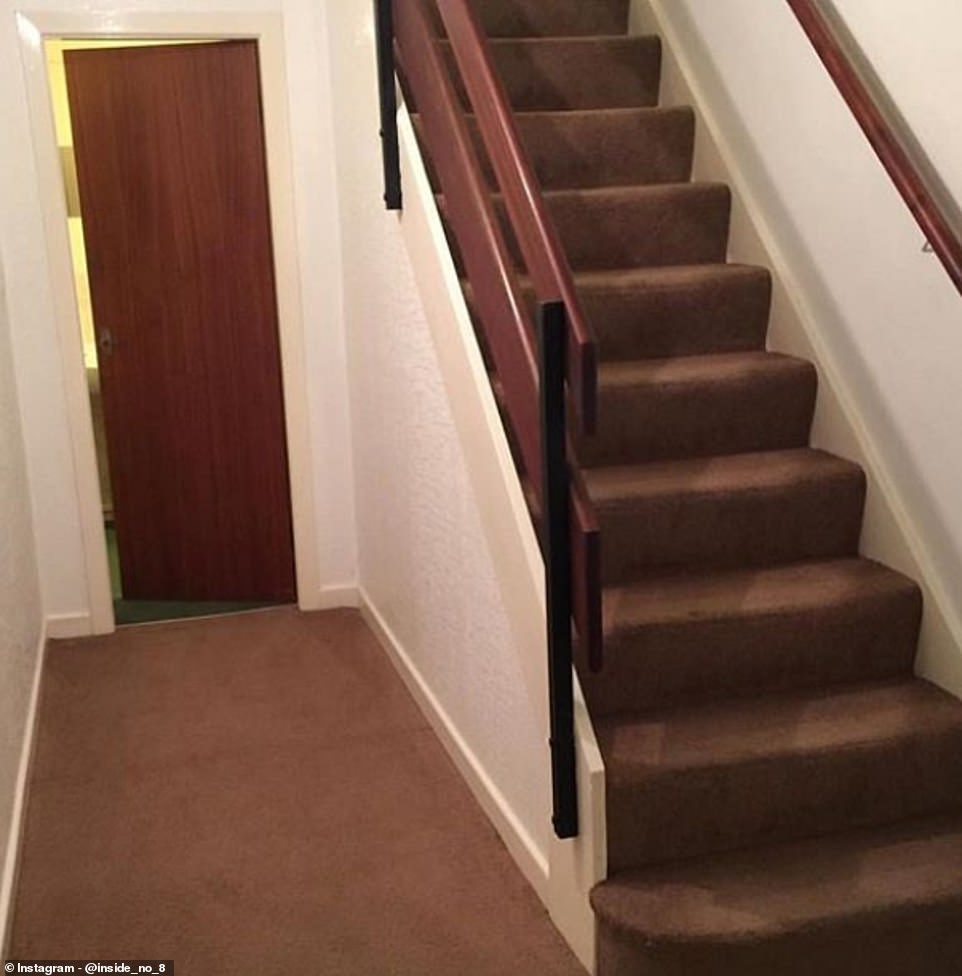 Shades of brown: the hallway as it looked when the couple first moved in…the carpets and doors have since been changed, with a clever space carved out under the staircase for reading 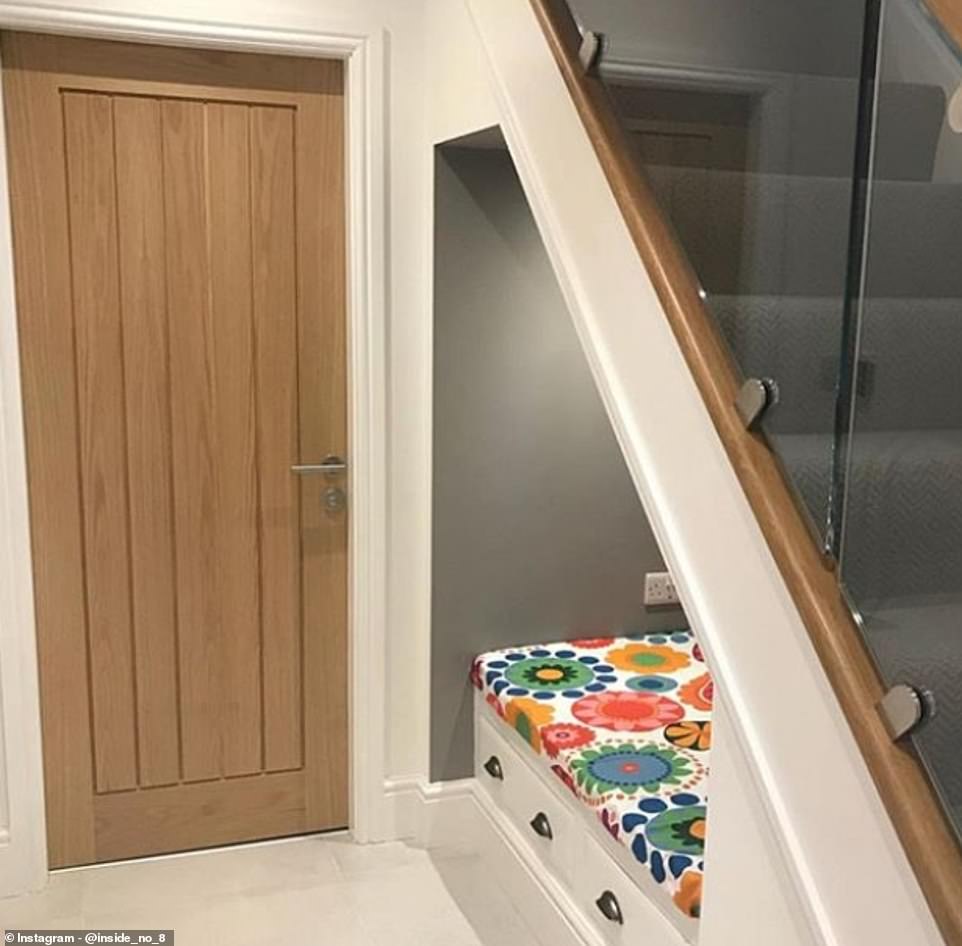 Snug in the snug…the dead space under the stairs now houses a pretty seat, with a shelving for reading material also installed