Five years ago, a late summer evening was losing its colours when I found an owl on the forested road. The grey and blue remains of the day made her more visible to me, sooty wing raised like a sail, a soft glitter of stars is what I’d tell myself later, her fine mottling under the headlights. Whatever car she’d bounced off had left her in one piece. My hands were warm and she was warm enough to say she’d been alive and busy, the littlest while ago. 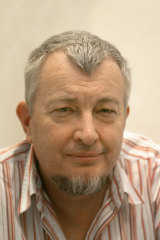 I wrapped her in a blue and white flannel blanket that I’d promised to save for my oldest daughter who’d been wrapped in the blanket as a baby.

She was a greater sooty owl, the length of a newborn child, and a third of the weight. I thought her to be a female because of her size. The males are the smaller of the pair, lighter.

Where was her mate? They’d have just started hunting. She was the main breadwinner for the nestlings, what happens to them?

They’d be somewhere in the hollow of a tree or they sometimes nested in caves. Her interstellar eyes said she was dead but I never trust a bird to be dead unless it’s in pieces. Her face had kept its heart, she was a heart-faced bird.

It was around this time that The Daily Mail posted a video of a similarly heart-faced owl being tormented with fire by a group of Mexican villagers who believed the bird to be a local woman said to be a witch. It simply stared back at whoever shot the video.

When I was a child on a farm we had a grass fire that my father and brother and I sought to contain by slapping at it with potato sacks. What worried me most was how the little birds waited until the fire was almost upon them to make their escape like so many sparks.

Now there’s news that a quarter of all sooty owls have been lost in the summer blazes. They’d just started their breeding season and would have been reluctant to leave their babies behind.

The soul of dead woman, a sign of the underworld, a charm against the bite of a mad dog, a thief of a household’s luck, a sign that a girl is to be born are but a few of the beliefs people have held about owls. At this rate that’s all we’ll be left with, the stories and curses and superstitions, the bird reduced to a myth.