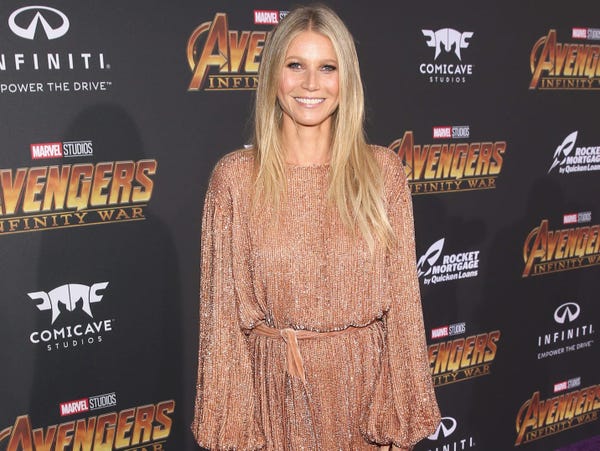 At 16 years old, Apple Martin — the daughter of Gwyneth Paltrow and Coldplay's Chris Martin — has a wardrobe filled with designer gowns.

In a recent interview with People, Paltrow said she began saving her red-carpet dresses more than a decade before Apple was born.

"She loves to play in my closet," the Goop founder told People's Hanna Flanagan and Andrea Lavinthal about her daughter. "I have saved everything for her since 15 years before I had her. I save everything. Not everything, but every red carpet look I have saved for her."

I can’t believe I’m actually writing these words but… happy sweet sixteen my darling girl. You are the light of my heart, you are pure joy. You are wickedly intelligent and you have the best, most dry, most brilliant sense of humor. I have the best time being your mom. I love our nightly evening chats when I really get to hear what’s on your mind. You work hard to get whatever it is you want to achieve, and you have grit and responsibility in spades. I am so damn lucky to be your mother, you beautiful, kind young woman. Thank you for choosing me. I adore you to the moon and back a zillion times. I’m sorry you are having this particular birthday during these circumstances, but as always with you, you find the best in everything. 💝

Paltrow, who celebrated Apple's 16th birthday in May with an Instagram post, added that her "beauty queen" daughter is "glamorous in a way that I'm not."

"She's very, very into makeup, which I'm not," Paltrow told People. "She knows how to do perfect, winged eyeliner. She gave herself acrylic nails. She's a beauty queen."

Of course, Paltrow has had her fair share of glamorous moments throughout her career. Most famously, she wore a pink, Ralph Lauren ball gown to the 1999 Oscars. That night, she also wore a pink shawl wrapped around her arms, a diamond choker, small earrings, and a glimmering bracelet.

However, Paltrow seems to favor the white, Tom Ford gown she wore to the 2012 Oscars. In a now-deleted blog post from Goop in 2013, cited in a HuffPost article, Paltrow said the dress — which had an asymmetrical neckline and a floor-length cape — was one of her best red-carpet moments.

Paltrow also chopped her signature, blonde strands into a sleek bob that year, and accessorized with a flower-shaped ring and crystal-covered cuff bracelet.

As HuffPost previously reported, Paltrow also loved the blush-colored Prada dress she wore to the 2011 Venice Film Festival for the premiere of "Contagion."

The halter-style gown had a tiered skirt and a high neckline held together with a bow.

The actress, who is celebrating her 48th birthday on Sunday, has previously shared candid looks into her relationship with her daughter — including moments when Apple has poked fun at Paltrow's lifestyle brand.

Most recently in April, Apple wrote a mock to-do list for her mother that jokingly said: "Make more vagina eggs & candles." Paltrow shared a photo of the list on Instagram, writing: "Apple's interpretation of my to-do list #quaranteen."