The birthday celebrations begin! Prince Charles is presented with a surprise cake by naval officers in Lagos ahead of him turning 70 next week

The Prince of Wales began his birthday celebrations aboard a ship on a lagoon in Lagos today, with a surprise cake from the Nigerian Navy.

The Prince, who turns 70 next week, was given a special cake and a ‘hip hip hooray’ from troops as he watched a training exercise aboard a Royal Navy ship based in the region.

Paying tribute to the Armed Forces – the Navy and Royal Marines – who are training the Nigerian Navy on exercises to help combat piracy and terrorism, he spent time on the lagoon watching small rib boats on exercise.

Wearing sunglasses, he was greeted by Commander David Goodman of the Royal Navy and Captain Noel Madugu of the Nigerian Navy, and given a briefing on the Flying Bridge about how the countries are working together. 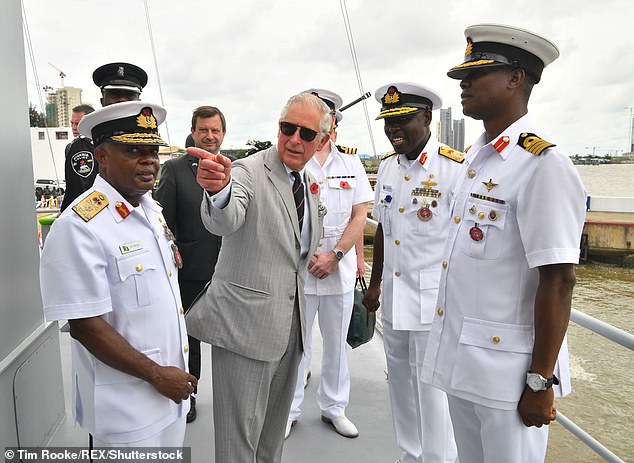 The Prince of Wales began his birthday celebrations aboard a ship on a lagoon in Lagos today, on the penultimate day of the royal tour 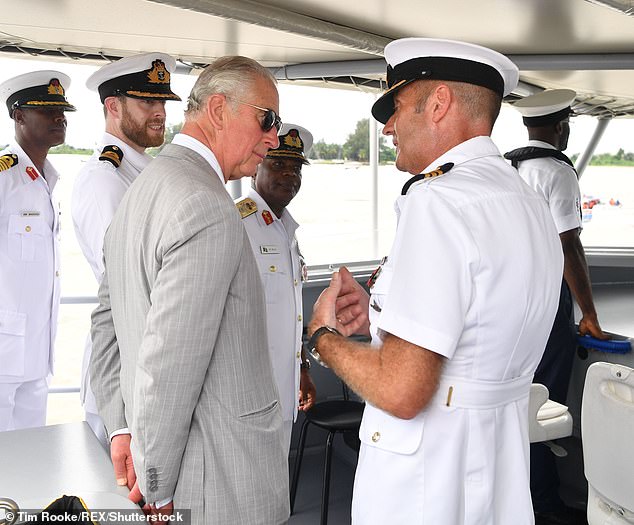 Charles, who turns 70 next month, met with naval officers as he was given a tour of the Flying Bridge ship while in Lagos today

He was then ushered to the port side of the ship to see Nigerian servicemen, who are currently on a six-week training programme, show off their manoeuvres and simulated boarding.

The British Armed Forces are working in the region to help combat piracy, a major problem off the coast of Nigeria where pirates terrorise the Gulf of Guinea.

The UK is currently training Nigerians to deploy to Lake Chad, where Boko Haram militants use the waterways to cement a stronghold over the northeastern region.

Despite the serious message of the engagement, the trip ended on a lighter note when the Prince was ushered into a small room below decks to be given a cake featuring his own picture, alongside the Union and Nigerian flags. 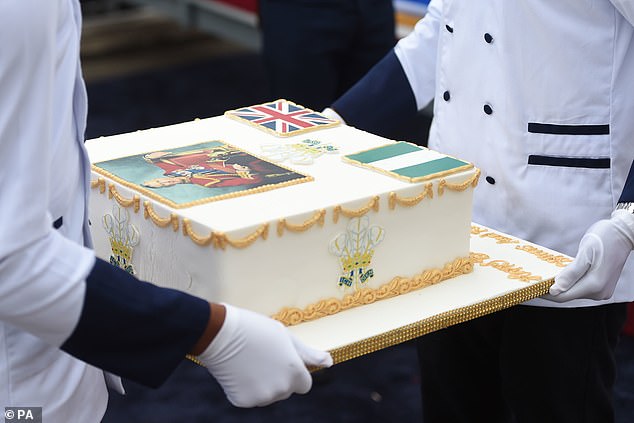 The Prince of Wales was presented with a surprise birthday cake by naval officers, which featured a portrait of Charles 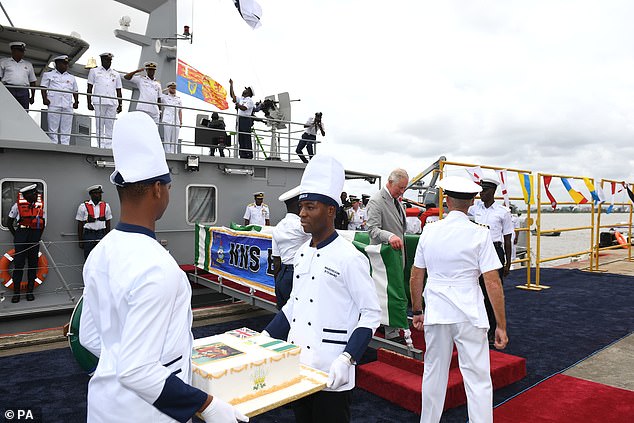 A card from officers, ratings and civilian staff of the Nigerian Navy wished him ‘many happy returns’, in an effusive message reading, in part: ‘May the Almighty God continue to shower his blessings upon you with more wisdom and good health as you strive to serve humanity as a Prince of Wales and most distinguished gentleman.’

As he disembarked, he was serenaded with three ringing cheers of ‘hip hip hooray’ in his honour.

Later the prince warned he fears leaving a ‘totally destroyed environment’ for the unborn grandchild expected by the Duke and Duchess of Sussex.

The prince issued his warning to Nigerian business leaders, saying: ‘As you know I’m about to have another grandchild I suspect some of you might have children or even grandchildren.

‘It worries me deeply that we are going to leave behind a totally destroyed environment for these poor children to inherit. It ain’t gonna happen in the future, it’s actually happening rapidly.’ 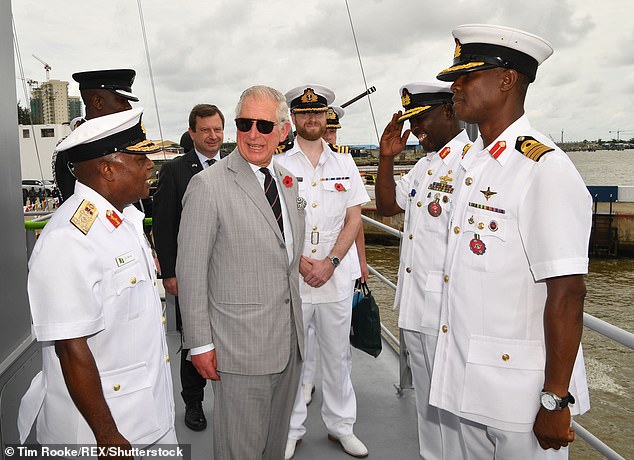 The Prince of Wales, 69, looked in high spirits as he went on to visit naval berths in Lagos, while donning a pair of sunglasses 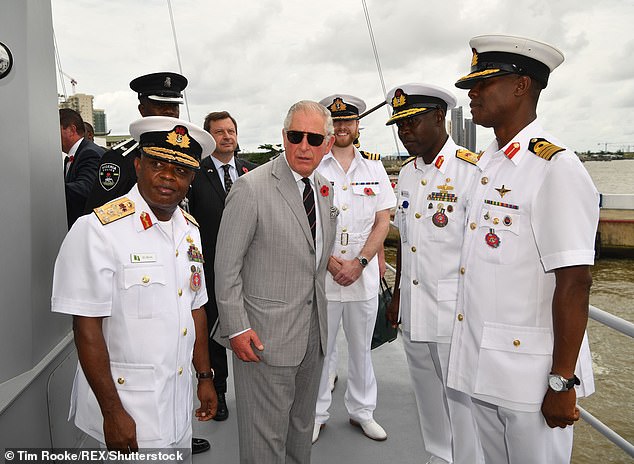 Charles looked animated during the visit to the naval berths in Lagos, on the penultimate day of his African tour 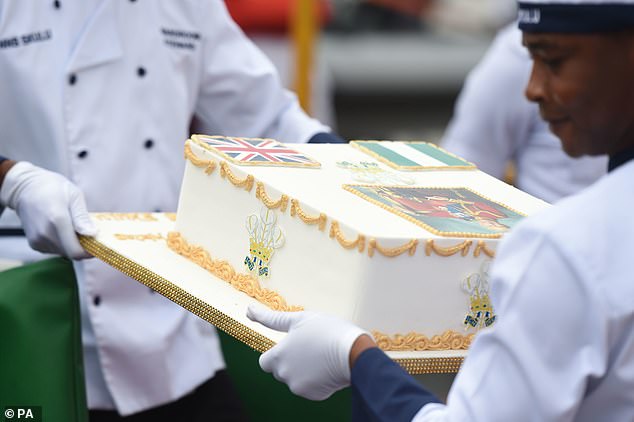 Charles told a meeting of A4S – his sustainability project – how plastics are ruining the ocean and creating dead zones at the Kingfisher Club, in Lagos.

He said : ‘Everything is part of a throwaway society that surely has to change otherwise we will disappear under a mountain of rubbish and pollution.

‘It seems to me people like yourselves have a hugely important role to play as we face probably the greatest challenge ever faced by our global economy. So there’s a more and more urgent need for real leadership.’

After the round table discussion, the Prince enjoyed a reception with the business leaders.

Charles touched down in Lagos without Camilla as he completes the final stage of his African tour alone. 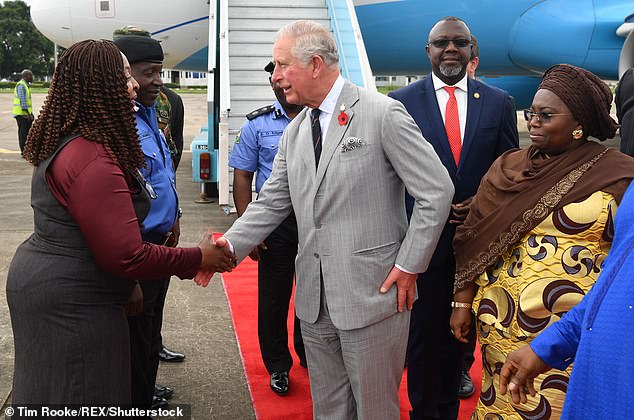 Prince Charles touched down in Lagos without Camilla as he completes the final stage of his African tour alone. He is pictured being met by officials at Lagos International Airport 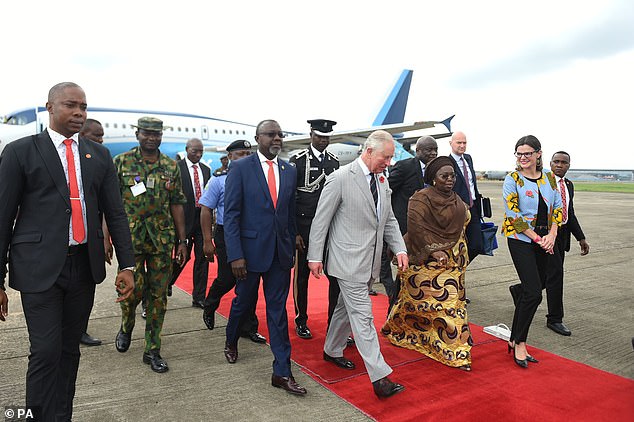 The Prince of Wales was given a red carpet welcome as he touched down in Lagos, Nigeria, on day eight of the royal tour 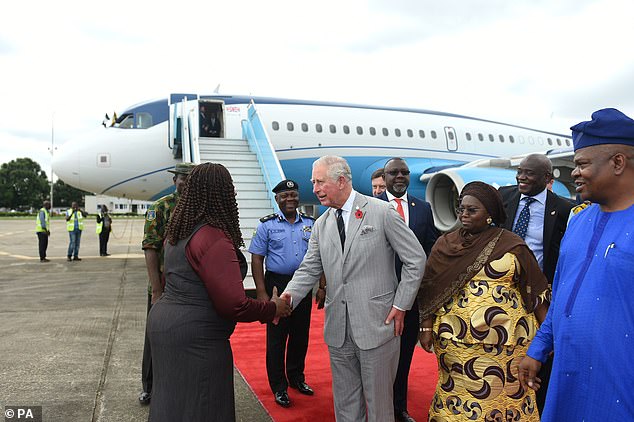 Charles is completing the final stages of the tour without wife Camilla, who has flown back to the UK on a scheduled flight

He looked in high spirits as he was given a red carpet welcome after landing in the Nigerian city.

Camilla. 71, flew back on a scheduled flight to London today following a day of engagements in Abuja yesterday.

The Duchess of Cornwall also joined her husband on the first two stops of her tour in The Gambia and Ghana.

The couple have been touring the countries on behalf of the British government, Clarence House announced last month.

Charles will return to the UK at the end of this week following the nine-day tour, in time for his 70th birthday celebrations next week.

The Prince of Wales has cut out a stop of a trip to Nigeria over security concerns, following months of deadly clashes between nomadic herders and farmers in the restive region. 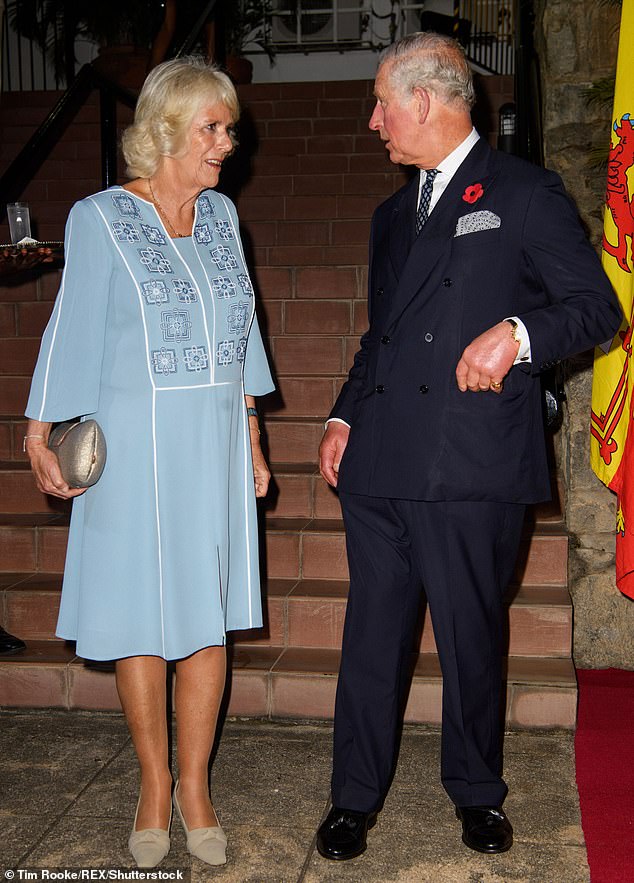 Charles has been joined by Camilla for the majority of the tour, including in Nigerian capital Abuja last night (above)

Prince Charles and his second wife, Camilla, arrived in the Nigerian capital Abuja on Tuesday, on the tail end of a West African tour that has included Gambia and Ghana.

They were expected to travel to Nigeria’s central city of Jos on Thursday, the last day of their stay, to discuss peace-building and conflict resolution.

‘Due to operational constraints beyond our control, we have decided at this time not to include Jos during their royal highnesses’ visit to Nigeria,’ said a British foreign office spokeswoman on Monday.

‘We are delighted to have an exciting programme of activity in Abuja and Lagos which will showcase those issues close to the Prince’s and the Duchess’s hearts,’ she said.

‘The decision was taken upon advice from the Nigerian government and others involved in security and operational aspects of the visit.’

Jos, the Plateau state capital of about one million people, is nestled in the hills of central Nigeria and has frequently been the scene of violence.

It has long been a hotbed of ethnic, sectarian and religious tensions that flare up during election season.

Nigerians are set to vote in hotly contested presidential polls in February 2019.