‘That is brilliant!’ The Chase producers keep fans on their toes by lining up a quiz team with some VERY unusual names – so did you spot the connection?

Producers on The Chase are fond of adding subtle details to keep viewers on their toes – and this week was no different.

On Wednesday night’s episode, the quiz team were made up of four contestants as usual – but their names all shared a nautical theme.

Shelley, Cliff, Coral and Sandy were thrown together to battle it out on the ITV programme, with viewers delighted at their ocean-inspired monikers.

The team were also introduced on the show’s official Twitter account in a post that read: ‘SHELLEY, CLIFF, CORAL and SANDY. Nope. We don’t see the connection.’

One viewer posted a picture of the line-up on Twitter, asking jokingly: ‘Is this a seaside special episode?’ 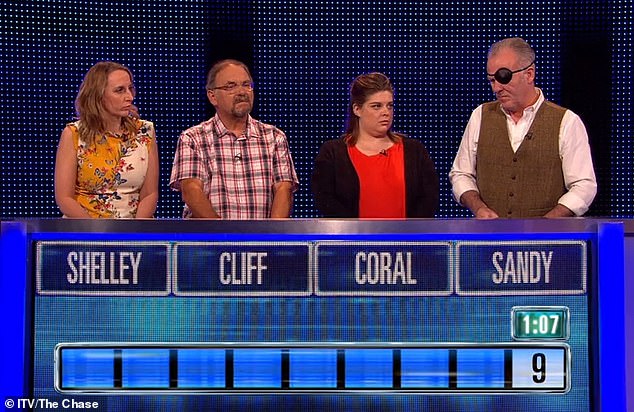 Shelley, Cliff, Coral and Sandy all appeared on Wednesday night’s episode and viewers were quick to notice the subtle theme the producers made with their names

The team were introduced on the show’s official Twitter account (pictured) in a post that read: ‘SHELLEY, CLIFF, CORAL and SANDY. Nope. We don’t see the connection’

Another viewer also spotted the bizarre coincidence and shared it on Reddit, pointing out the connection between the contestants’ names.

‘That. Is. Brilliant,’ said one. ‘Love it. Coastal themed Chase,’ added another, as plenty of seaside-themed puns poured in on social media.

One person couldn’t help but notice Sandy’s eye patch, writing: ‘In keeping with the theme, Sandy was also dressed as a pirate.’

The team successfully managed to bank £31,100 during each of their rounds, adding more cash to the pot during the penultimate question round.

But they ultimately failed to beat chaser Shaun Wallace, and ended up going home with nothing.

One viewer took to social media to point out that the names were all connected with a nautical theme, as one asked ‘is this a seaside special?’ 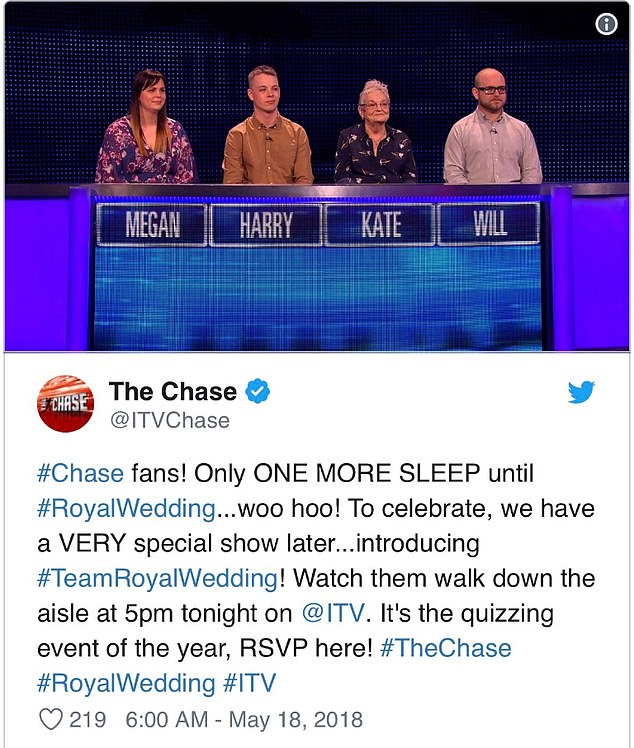 It isn’t the first time The Chase have used the contestant’s names to send a message, with a royal wedding special filmed earlier this year (pictured)

The nail-biting final round saw them go head-to-head with Shaun Wallace, but he caught up to them as they got their questions wrong.

Ahead of the Royal Wedding earlier this year they filmed a royal special with a team of Megan, Harry, Kate and Will.

Last year they set up a team that were called Tom, Dick, Ann and Harry.

In another episode the contestants shared names with characters from Friends, and were called Rachael, Ross, Phoebe and Joe.

The Chase is on weekdays from 5.30pm