Small bars will be allowed to deliver cocktails directly to Sydney's doorsteps from Tuesday, as the NSW government lifted the licensing restrictions around supply of alcohol by licensed venues. 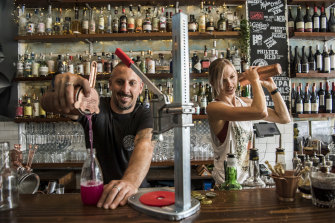 The move hands a potential lifeline to the small bar industry, which was effectively shuttered on Monday as the federal government ordered the closure of non-essential services – including pubs and clubs – to stop the spread of coronavirus.

As restaurants and cafes across Sydney scrambled to pivot to takeaway-only service, small bars appeared fated to fall into a regulatory gap, their trading halted by NSW's alcohol licensing conditions.

Mr Dominello said the government "had to be agile" as it attempted to lessen the economic pain caused by the coronavirus pandemic to businesses.

Some small bars are equally ready to demonstrate their agility. 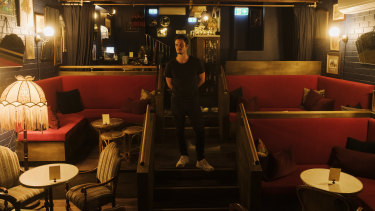 Boutique parlour bar Dulcie's, in Kings Cross, is devising a delivery model that will potentially offer "patrons" not just cocktails but also takeaway shakers, rentable glassware and access to the in-house playlist for "the full Dulcie's experience" in your living room.

Owner Brandon Martignago says this model is not about profit but survival, as small bars grapple with the prospect of being closed for six months or longer under the shutdown.

"This door-to-door delivery service for us would be the difference between weathering the storm or not," Mr Martignago said.

"All of these cocktails would come with proper garnishes, proper descriptions, they would even come with coasters from the bar."

Cocktail delivery has already taken off in New York, where happy hour has moved online and "quarantini" parties have become a popular mode of escapism for a city in lockdown.

Sydney MP Alex Greenwich, who had been lobbying the government to lift the delivery restrictions on small bars, welcomed the move.

"This will be especially important for small bars, which wouldn't otherwise have had an income but have a very loyal customer base who want to support them and their speciality offerings during these difficult times," he said.

Mr Greenwich will meet with Mr Dominello's office and the Independent Bars Association NSW on Tuesday to hash out the finer details of what the delivery model will look like and how to promote it to the community.

Pasan Wijesena, the association's vice president and co-owner of Jacoby's Tiki bar and Earl's Juke Joint in Newtown, said the industry was confronting an existential crisis.

"You probably can't replicate takings of being an open bar, but maybe you can make enough to employ one or two people," Mr Wijesena said.

"We put a lot of effort into these bars, we want to make sure they still there in six months."

"We are full steam ahead. We can't afford to wait out a couple of months for a tax rebate. My staff need money," Ms Robens said.