Did YOU spot him? Fans thrilled to see John le Carré, 87, in a cameo role as a WAITER in TV adaptation of his book The Little Drummer Girl – but brand the rest of the show ‘leaden’ and ‘dull’

The BBC’s lavish adaptation of John le Carré’s The Little Drummer Girl has received the ultimate seal of approval from the author himself, who made a short cameo in Sunday night’s episode.

Carrying on his tradition of appearing in TV adaptations of his wildly successful thrillers, le Carré was spotted by viewers who pointed out that the waiter serving Florence Pugh’s character Charlie a shot of alcohol was in fact the 87-year-old spy turned author.

Viewers watched as Charlie called out her drinks order upon arriving at an Austrian café, and taking a seat on the outdoor terrace. An elderly waiter confirmed her request for ‘slivovitz’; and headed inside to fetch her a glass of plum brandy.

Although fans were thrilled with the cameo, the big budget drama has failed to win over all viewers, many of whom have said on Twitter they’re giving up on the ‘confusing’ slow-burn plot. 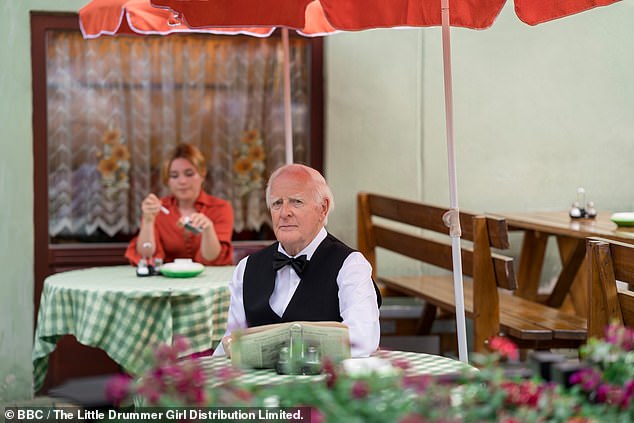 Author John Le Carre made a cameo appearance in the third episode of The Little Drummer Girl, starring as a waiter who serves Charlie, played by Florence Pugh (seen in the background) a drink 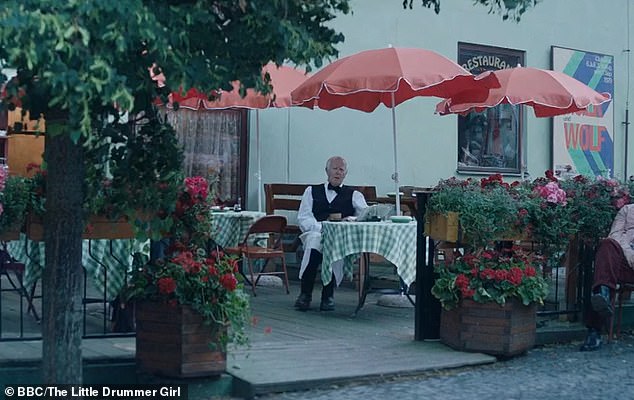 Le Carre carried on his tradition of starring in adaptations of his own work, following on from his turn in The Night Manager and the movie version of Tinker Tailer Soldier Spy

‘Is anyone else confused,’ asked another.

One person savagely critiqued: ‘#TheLittleDrummerGirl Never was international security and espionage so dull. Leaden paced. Not even the tan and orange set decor can save it. Plot marching to the beat of a different drum.’

Others had mixed feelings about the spy drama: ‘The Little Drummer Girl is achingly stylish. But still no clue what is going on.’

‘Still not sure what is going on in #TheLittleDrummerGirl but I’ll stick it out cos it’s the BBC! Can anyone help me #explainplease,’ said another. 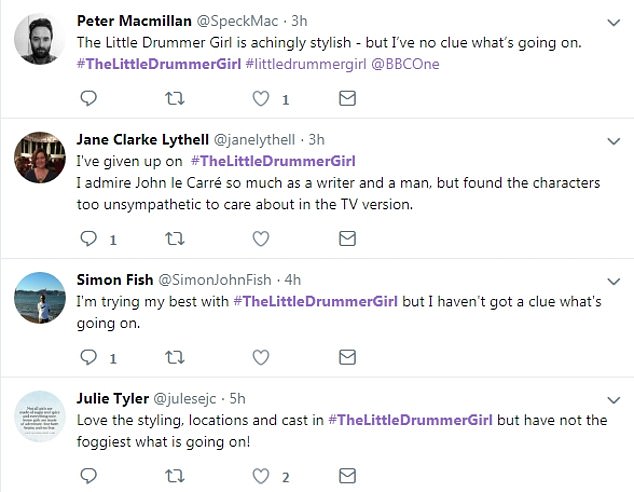 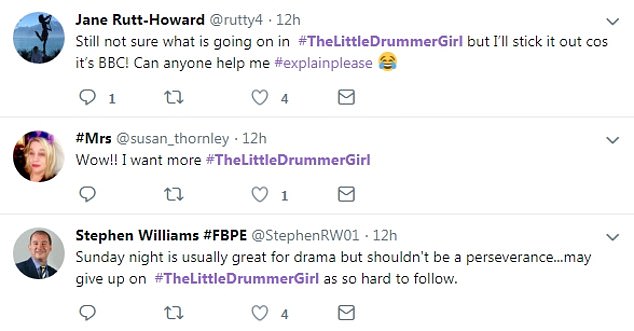 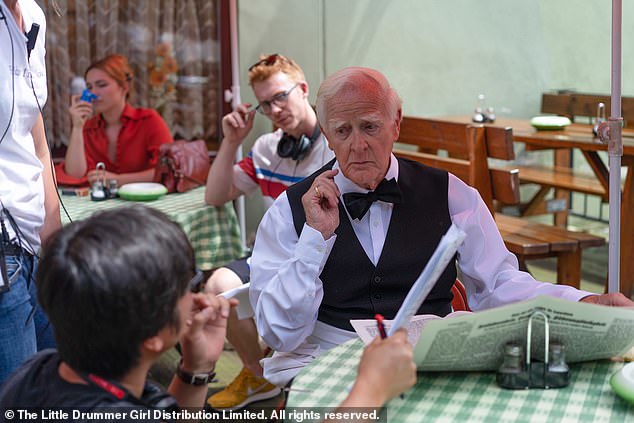 Le Carre on set during his scenes, it was reported that he initially went off script but the extended scenes were cut leaving just a single line in response to Charlie (Florence Pugh) 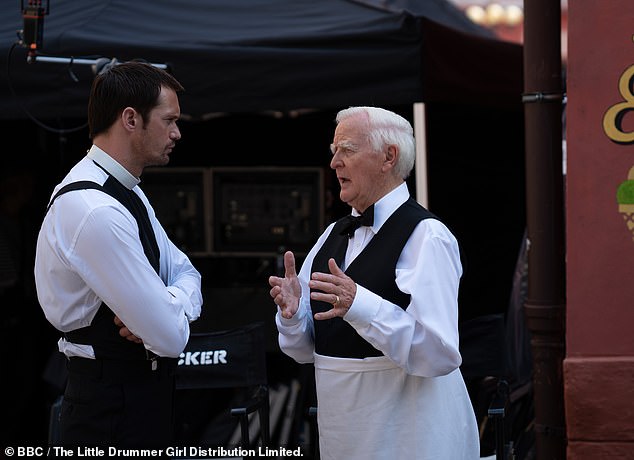 Le Carre filmed the scene with star Alexander Skarsgård, who hinted that he had given his character a monologue in German which didn’t make the final cut

As well as The Night Manager, Le Carre has appeared in the film adaptation Our Kind of Traitor, as a museum guard, and the 2011 movie version of Tinker Tailor Soldier Spy, as a Christmas party guest.

Radio Times reported that while on set Le Carre attempted to go off script as he did while filming The Night Manager.

Actor Alexander Skarsgård told the site: ‘He’s a better actor than I am! He was really good. It was all in German: he’s obviously fluent in German, of course he is.’

He added: ‘He stole the scene for sure, stole the whole thing. He was just going to serve my coffee but it ended up being a long German monologue.’

In the third episode Charlie’s skills were put to the test when she was sent to deliver a shipment of explosives to a terror cell in Austria, but finds her loyalties divided as she comes face to face with the real terrorist Michel.

Kurtz convinces Becker of a risky plan – faking the death of the militant they have in custody before anyone notices he was missing, while Charlie returned to London and tried to reconnect with her old life.