‘My cousin grabbed the mic and thanked all of the family before the bride and groom’: Couples shame the WORST behaved wedding guests they’ve encountered

While wedding planning can be a stressful affair, the day itself often remains relatively drama free.

But, as couples around the world have revealed on Facebook, not everything always goes to plan and unruly attendees often behave in the most terrible and shocking ways.

Some of the worst antics as recalled by newlyweds include fist fights between family members, incidences involving far too much alcohol and a spot of truly awkward dirty dancing. 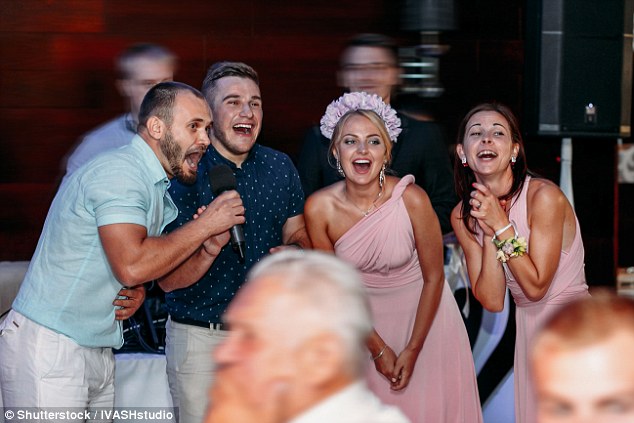 For many, a wedding is the single biggest event of their lives – a romantic day filled with celebration, laughter and hopefully no mishaps (stock image)

The thread began with one person, who’d worked as wedding DJ, revealing how he’d dealt with a man who’d helped himself to his mic, so his kids could ‘impromptu sing’ Let It Go from Frozen.

‘I immediately got up from my dinner seat, walked over, and nicely asked the child for my mic back while telling the dad you need to ask before touching things on the DJ stand,’ he said.

‘He, of course, gave me the “they’re just little kids. They won’t hurt anything” speech as I watched the one almost drop my $300 mic.’

The DJ also recalled other unseemly behaviours by guests, including ‘overly aggressive’ glass tapping and an inappropriately timed thank you speech.

‘There’s the guest who got over aggressive with the glass tapping and broke glasses and a knife. The middle-aged lady who was wasted drunk before dinner was over and escorted off the property halfway through the dancing portion.

‘The dumb b**** who three times busted her glass in the middle of the dance floor. The cousin that grabbed the mic and proceeded to thank all of the family for coming, right before the bride and groom were scheduled to thank everyone.’

Others sharing their experiences on the post spoke about having to endure the discomfort of uninvited family showing up – and demanding to be seated.

‘An entire faction of my husbands family who we had purposely not invited just showed up,’ one woman wrote.

‘We ended up having to seat them (they did not get meals because I’m petty) because our party had already started and we didn’t want to ruin it (the party part is like the western version of a reception for us but bigger because that’s where we have the real fun).

‘They also tried to participate in some of the traditional dances that they shouldn’t have so it was messy,’ she added. 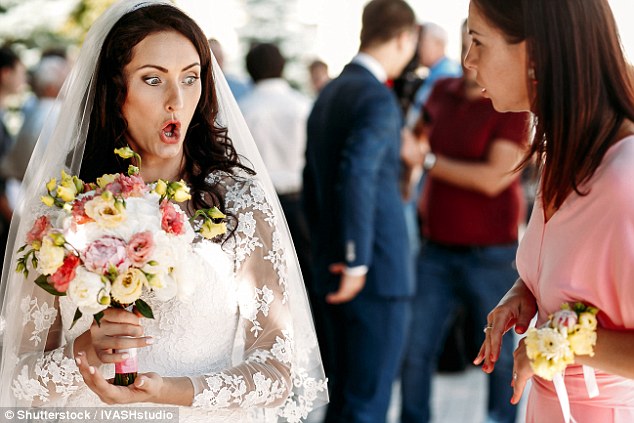 Couples also dished on how drunk guests behaved in the most embarrassing ways.

‘My brother’s ex-girlfriend got trashed on a bottle of Champagne she took from the bar and then proceeded to try and physically fight my brother because he took her keys,’ one woman shared.

‘She wanted to drive home when she could barely walk. My bridesmaids about beat her after she started taking swings at them also.’

Another spoke about the perils of letting a drunk person ‘commandeer a microphone’.

‘He was making biting commentary about people walking in and out and didn’t realise he was being broadcast into the dining room.’

A third added: ‘My boyfriend and I attended a wedding this August, and during the best man’s speech the older woman sitting in front of us quietly vomited all over herself and on the floor next to us.

‘She threw her napkin down on her vomit and calmly walked outside where her angry husband had already been waiting, guess he’s used to her getting blackout before dinner starts.’

Newlyweds also revealed how fist fights erupted between guests and family and spot of dirty dancing made for a memorable night.

‘My husband’s uncle and two cousins got into a fist fight at ours, we had to pull them apart and the younger of the two cousins (23) started screaming at his mother calling her a s*** and a w****.

‘It was the first time I had met any of them,’ she revealed.

A woman recounted how her best friend’s mother let a guy ‘bend her over and grind on her’ at her daughter’s wedding, in front of her ex husband, his best friend and wife, and her kids.