Couple save £5,600 by serving their 280 wedding guests out-of-date and surplus food destined for the BIN

A couple who saved £5,600 by serving their wedding guests food destined for the rubbish bin have revealed how they only told their friends and family the truth after they’d tucked into dinner.

Kayley Tilston, 34, and husband Joe, 35, from Bradford, West Yorkshire, served a lavish banquet of sea bream, sea bass, ox, pork ribs and chicken, with vegan, gluten-free and vegetarian options, for their 280 guests at their wedding reception.

But their guests were stunned to learn after they’d tucked into their meal that it had been created using only surplus food that had been destined for the rubbish bin.

The thrifty couple told the BBC they spent just £5 per person on the catering at the event, which they estimated saved them £5,600. 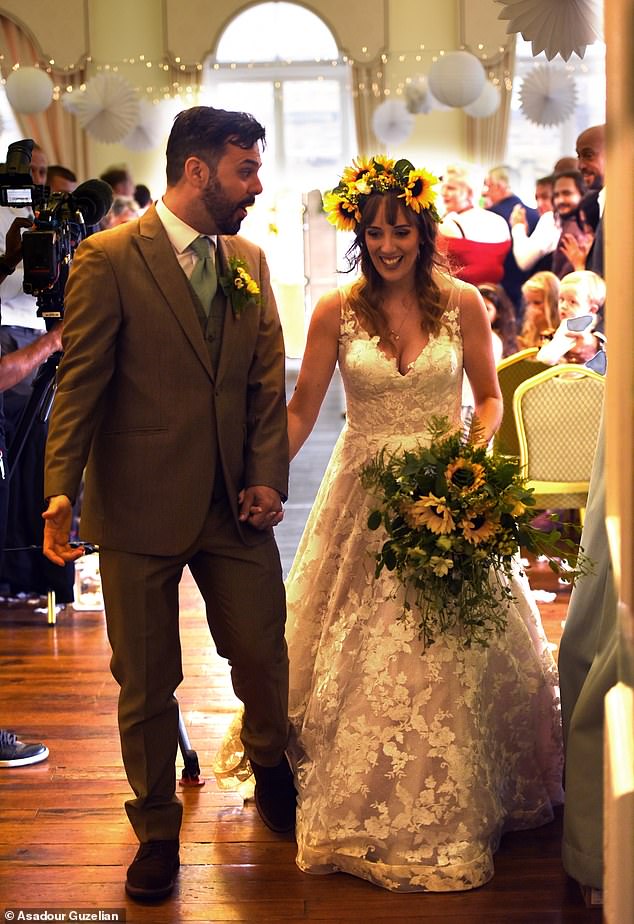 Kayley Tilston, 34, and husband Joe, 35, catered for all 280 of their wedding guests with surplus food that was destined for the rubbish bin 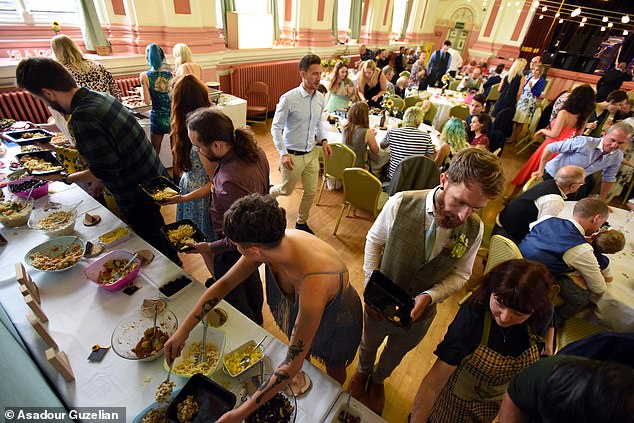 The couple fed their guests for just £5 per person, with Kayley saying she believes they saved up to £5,600

The bride and groom only revealed the origin of their meal after guests had already tucked in, with the room letting out a ‘huge gasp’ when they learned the truth.

But Kayley said despite their initial surprise, the response from guests was ‘incredible’.

The bride added that many guests went back for second and third helpings of the wedding banquet.

She said that the environmentally minded couple tended to avoid waste whenever they could, and would often be creative with how they’d cook leftovers to avoid throwing food away. 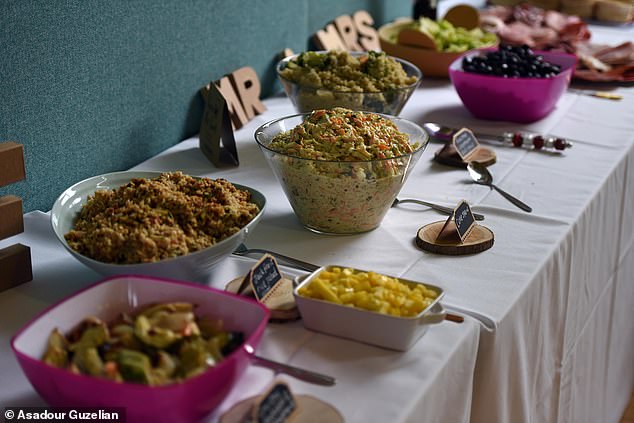 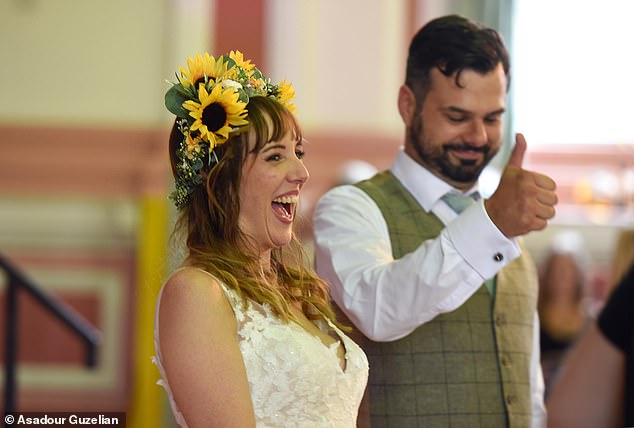 The newly-married couple only revealed the truth about the food after the guests had tucked in, with Kayley admitting many were stunned by the revelation 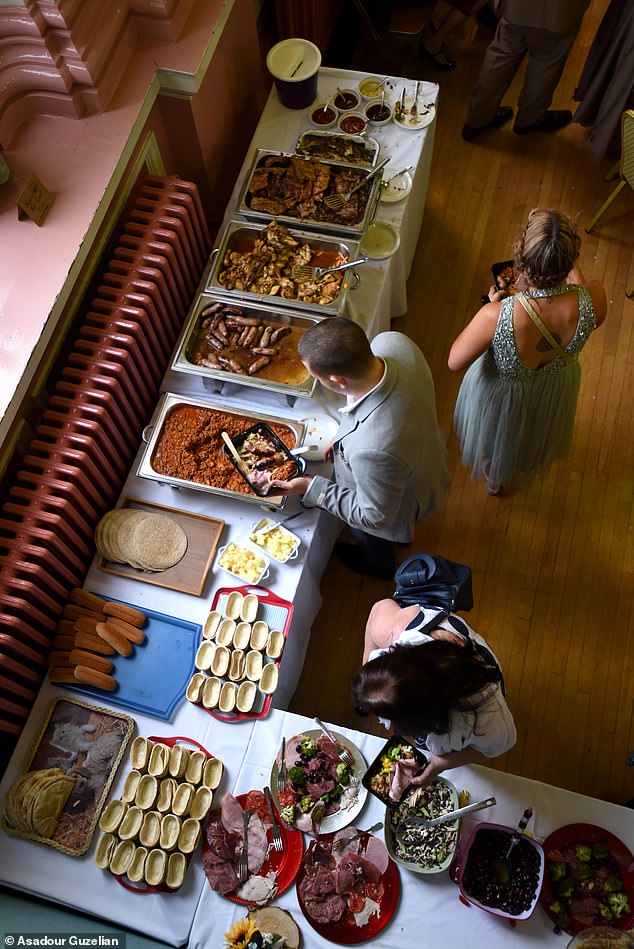 The couple said following their revelation, many guests returned to tuck into multiple courses of food

The health worker added: ‘So the idea really combined our morals with the logistics of catering for so many people.’

Kayley added that the average wedding breakfast could cost up to £25 per person, making their potential spend up to £7,000.

Instead, the couple paid £5 per person for The Real Junk Food Project to cater their wedding, which run ‘pay-what-you-like’ cafes selling ‘waste’ food.

Adam Smith launched The Real Junk Food Project in 2013 as a cafe in Leeds, and offers meals created from waste food. 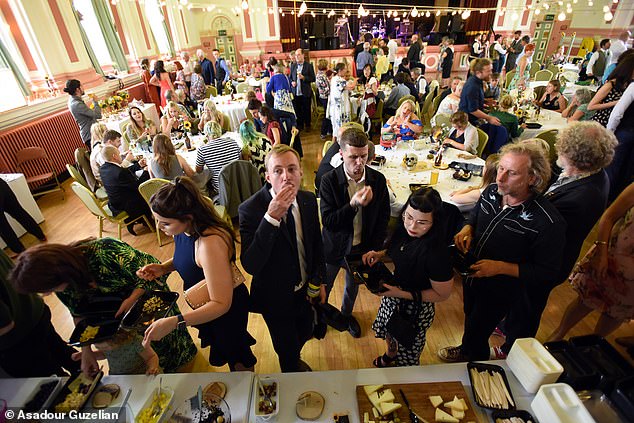 The couple paid roughly £5 per person for The Real Junk Food Project to cater their wedding, saving them thousands 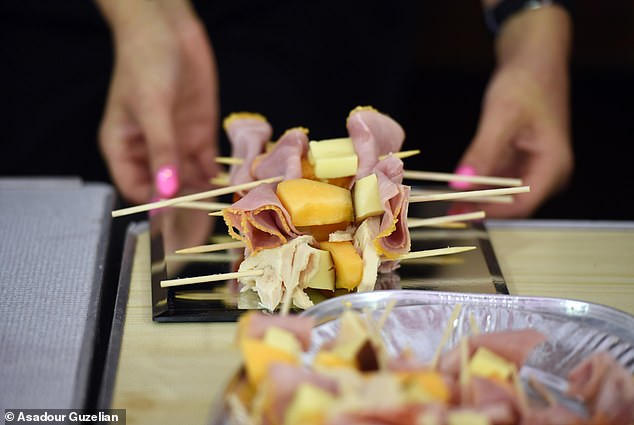 It now redistributes food that has been over-ordered, mislabelled by retailers, or it has passed its sell-by-date.

For Kayley and Joe’s wedding the company re-imagined the wasted food as a selection of canapes and buffet served in recycled cardboard packaging.

As well as the 250kg of food the couple saved from ending up in landfill, other aspects of the wedding were also reused and recycled. 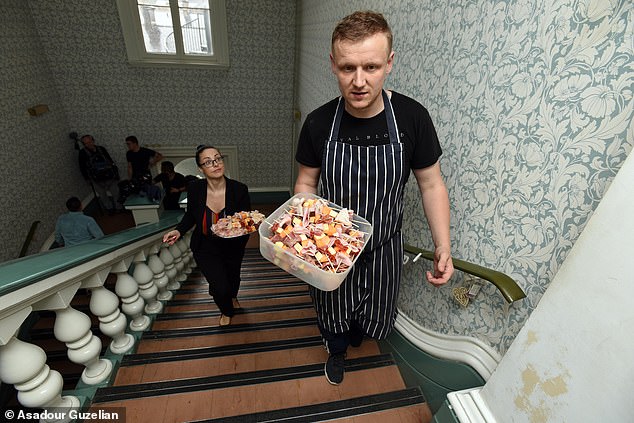 Adam Smith, founder of the Real Junk Food Project and volunteer Hazel Heeley take canapes made from waste foood to guests at the event 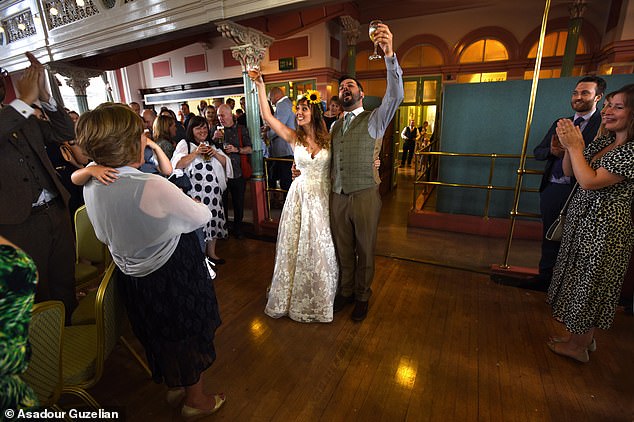 The couple said they were overjoyed with the results from the Real Junk Food Project, which they said mixed logistics with their moral standpoint

Joe and Kayley used an old room divider acting as a backdrop to the ceremony and later as a photo booth.

Meanwhile the bride’s floral headpiece was adorned with surplus flowers provided by a florist friend.

Kayley also said she was keen to re-purpose her wedding dress so that she could wear the gown again.