The real-life Flintstones! Couple who live as ‘modern Stone Age people’ reveal how they teach children to eat bugs and make bows and arrows

A couple live as ‘modern Stone Age people’ – eating bugs and wearing clothes made of rabbit fur to impersonate cavemen.

Naomi Walmsley, 36, and husband Dan Westall, 38, dress in full Paleolitihic designs they create themselves and make their own bows and arrows for teaching hunting skills.

The couple, from Coalbrookdale, Shropshire, have transformed a patch of woods near Blymhill Common in the village of Tong into an accurate Stone Age village – just 10 minutes from the M54.

Here they run Outback2Basics, an organisation which educates schoolchildren in skills and life in the Stone Age – from painting, eating bugs and making arrows to the workings of a compost toilet.

Mum-of-two Naomi describes her outfits as ‘cave woman fashion’ with throws made primarily of rabbit fur, while Dan dons tines made from deer antler round his neck – and the couple admit they do get some funny looks when they turn up at the petrol station in full Palaeolithic garb. 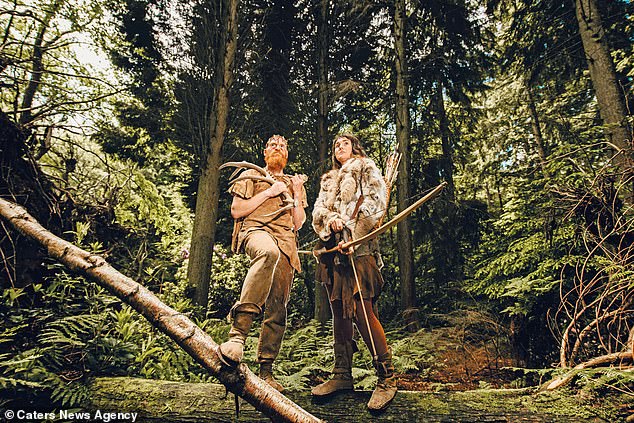 Naomi Walmsley, 36, and husband Dan Westall, 38,, pictured at their Stone Age School in Shropshire, use their knowledge of the Stone Age lifestyle to educate the public about skills that were once a part of everyday life 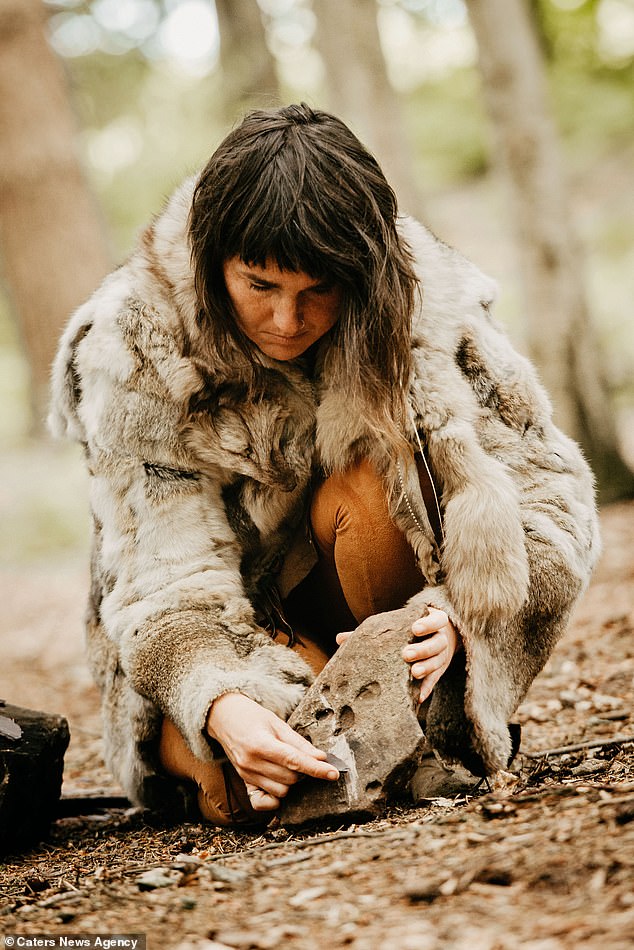 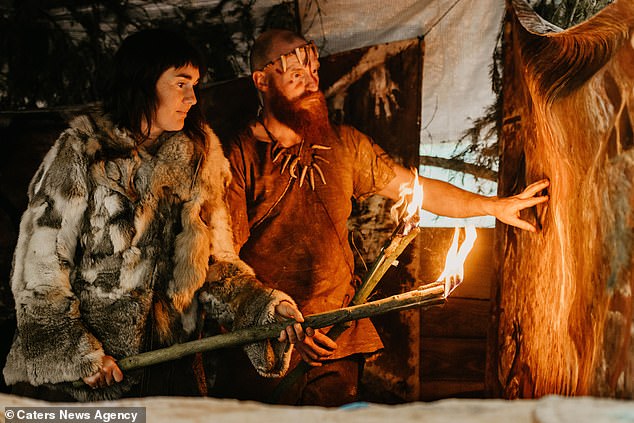 The couple, run Outback2Basics, which educates schoolchildren in skills and life in the Stone Age from painting, eating bugs and making arrows to the workings of a compost toilet from woods near Blymhill Common in the village of Tong

‘The kids who meet us actually think we’re actually from the Stone Age.

‘We try and bring this way of living into our lives when we can.

‘I had a whole day off the other day so I made loads of arrows, and when we have a day as a family we always choose to spend time in nature in these woods or elsewhere.’

Dan said: ‘I do dress up most days. Occasionally you’ll forget and go and get petrol and catch yourself in the reflection and think, oh damn, it’s happened again.

‘The reaction in the car when I have my full face paint on in a traffic jam is pretty funny too, they just stare.’ 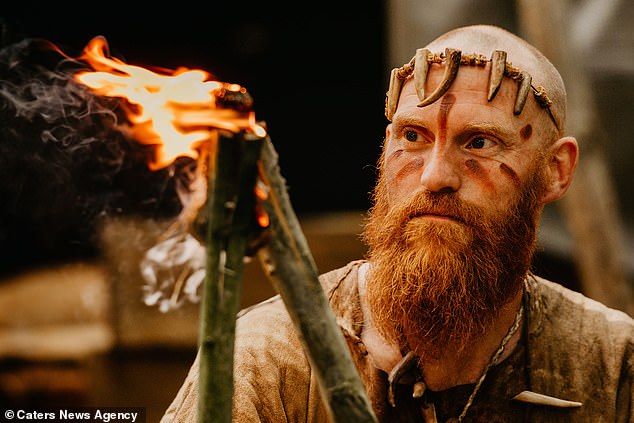 Naomi added: ‘When you go to pay it’s like the cashier is thinking, don’t let them know I know.

‘They don’t go “wow, are you going to a fancy dress party?”

‘They don’t say anything, which is almost weirder. They will ask if you’re having a good day. 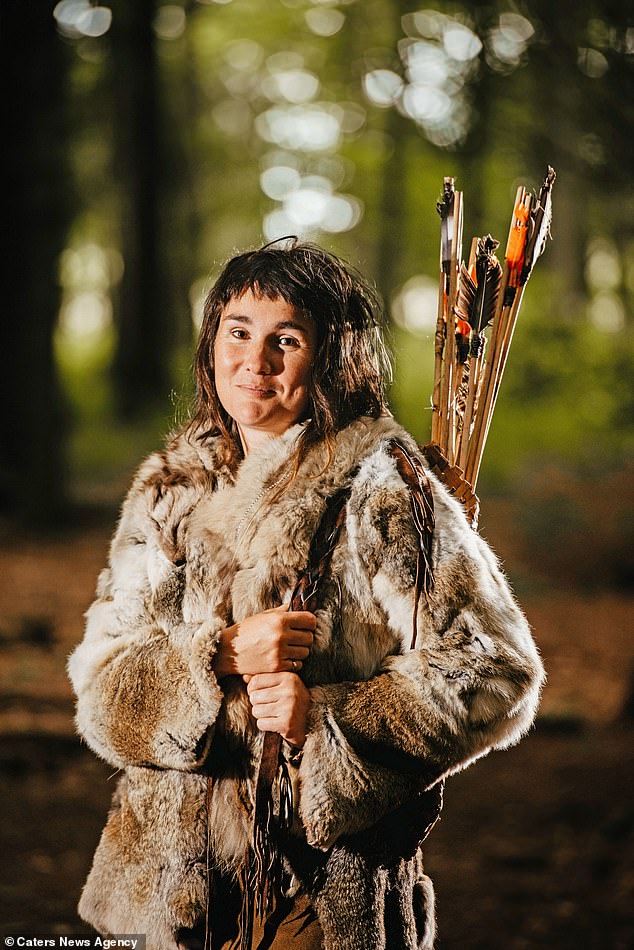 Naomi and Dan have two young daughters Wren, 20 months, and Maggie, six, while Dan also has an older daughter called Sam who lives in London.

Having always been interested in the outdoors, Dan worked as a survival consultant behind the scenes on various TV shows.

The couple met 13 years ago while working at a hostel in North Wales and have spent every day since working and living together, sharing a passion for the outdoors.

But they decided that if they were going to properly teach survival skills then they would have to go and experience it, so in 2010 they went on Lynx Vilden’s Stone Age immersion project in America.

The one month course taught cave dweller skills and culminated in living completely primitively in the wild without any modern equipment, with the couple forced to make everything they needed to survive as a primitive person from scratch. 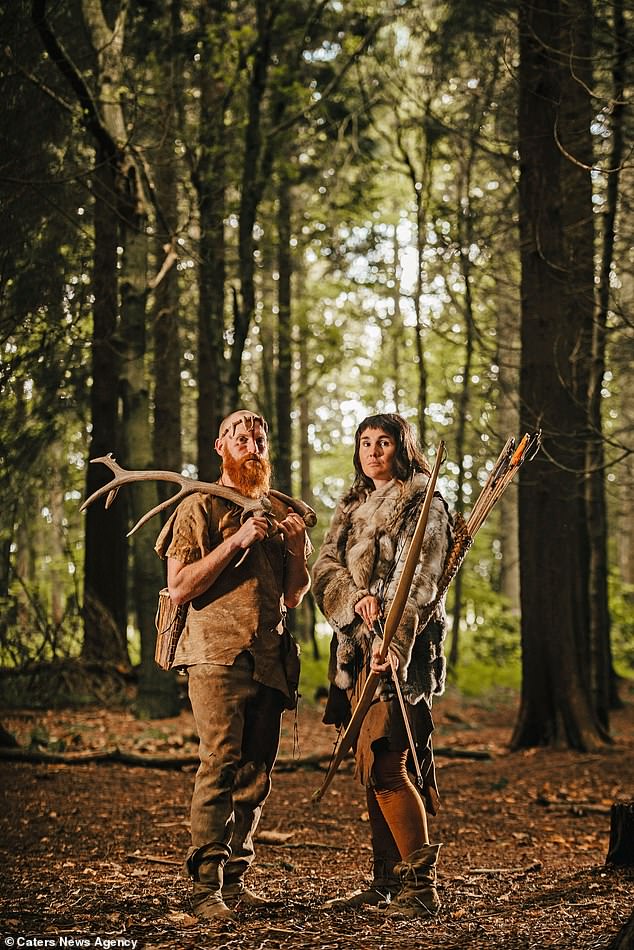 Naomi said: ‘We wanted to teach with more authenticity, instead of saying “you could make this if you needed to”, we wanted to be able to say this is what we did do.

‘We went out there not really knowing what to expect and lived in a woodland a bit like here to the east of Washington.

‘We learned all the primitive and Stone Age skills. It was four and a half months of learning over or six days a week.

‘We hunted and prepared the food, we foraged, we made our own weapons, we made our own tools and learned how to make fire by friction, found clay from the ground to make pots, made all of our clothes from dead animals..’ 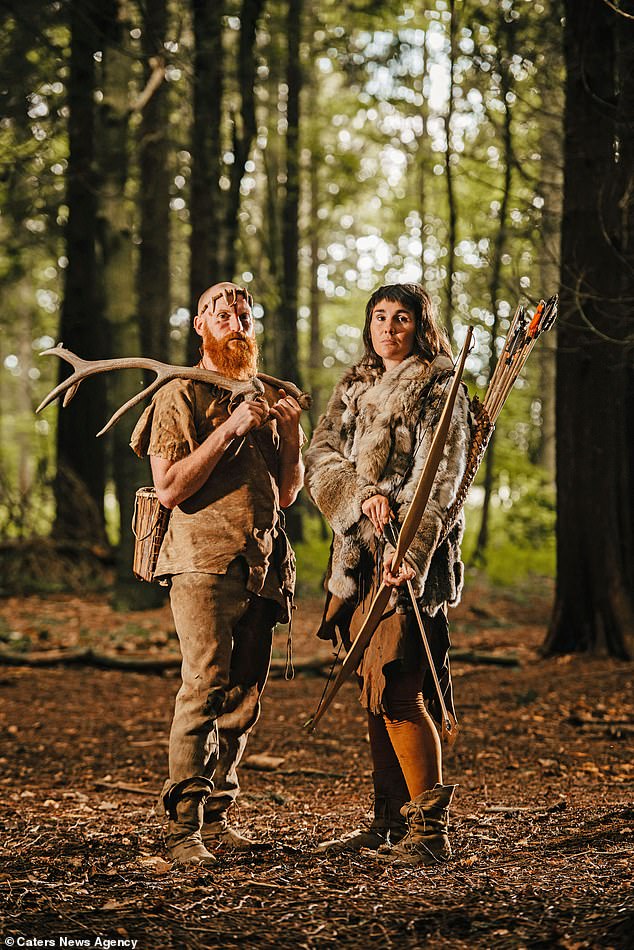 Mum-of-two Naomi describes her outfits as ‘cave woman fashion’ with throws made primarily of rabbit fur, while Dan dons tines made from deer antler round his neck

‘There were no provisions for emergencies, we were living like primitive people would have done, and do.

‘It was great to have that experience of no backup as it was real. It was us and our wits and we survived.’

The couple brought their experience back to the UK to focus on teaching schoolchildren after the Stone Age entered into the curriculum.

Since then, they have invited 1,100 children into the woods from September 2016 to January last year.

One of the activities involves allowing children to make real cave art using traditional red and yellow ochres and charcoal.

They also show them how the art would have looked in Stone Age caves using torches.

But sometimes it is just good for children to get back to nature, the couple say.

‘These kids never have the chance to sit still and do nothing. They love it and ask to do it again in the morning.’

They hope it will encourage the next generation to understand and care for their natural environment.

Naomi said: ‘We might not insist the kids have worm soup and we don’t hunt for our dinner, but we just want to do anything we can to encourage children to go outside.’