Nightclub owner whose London venue was loved by Prince Harry claims he was the ‘perfect guest’ who bought staff tequila shots in racy memoir charting her drug addiction, A-list guests and being conned out of £200,000 by a billionaire developer

A former nightclub owner whose quirky East London venue was a favourite of Prince Harry’s has penned a racy new memoir charting her addiction to drugs and alcohol, her brushes with the law – and how her empire all came crashing down after she was conned out of £200,000 by an infamous billionaire property developer.

Tava O’Halloran, 41, from Sydney, ran The Bath House in Liverpool Street, and told how the Duke of Sussex, 35, was a ‘perfect guest’ who bought staff tequila shots and left generous tips.

Swept up in a work hard, play hard industry, Tava told how she’d take cocaine five nights a week and mingled with the famous artists, models and musicians that frequented her clubs.

She went on to own several other venues in London and Brighton, before she and husband Rich Pack, 44, ‘lost everything’ in a devastating con and were forced to sell up and start again in her native Australia. 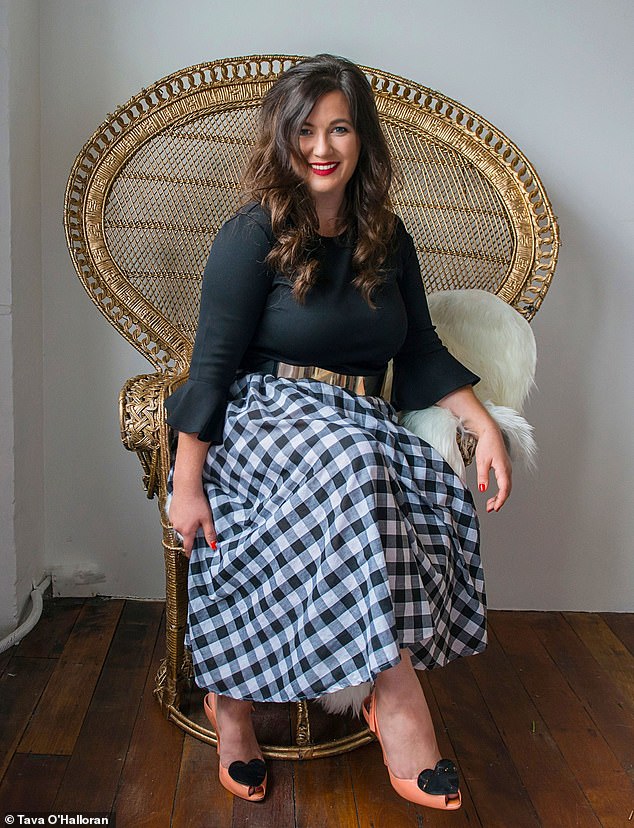 Tava O’Halloran, 41, from Sydney, pictured, has penned a racy new memoir charting her addiction to drugs and alcohol, her brushes with the law – and how her empire all came crashing down after she was conned out of £200,000 by an infamous billionaire property developer 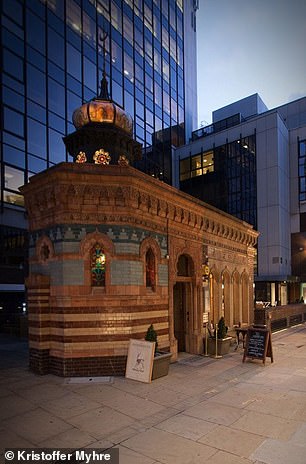 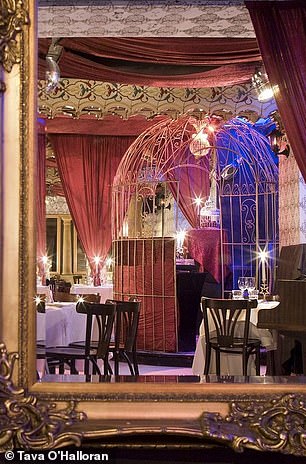 Tava ran The Bath House in Liverpool Street, pictured, and told how the Duke of Sussex, 35, was a ‘perfect guest’ who bought staff tequila shots and left generous tips

Speaking to FEMAIL, the mother-of-two – whose book Queen of Clubs is out this week – said: ‘There were so many things where you think, I should have stopped then, but I didn’t. Writing the book was a reflection on how tightly gripped I was on the lifestyle; it was so consuming.’

At 25 and a budding actress, Tara bought a one-way ticket to the UK at 25 following a break-up, and moved in with her sister in the East End.

It was there she ‘found her people’, and Tava recalls how she was thrust into the nightclub scene after landing a job on the door dealing with guest lists at a large venue in vibrant, gritty Shoreditch.

She quickly rose through the ranks and was booking big acts like Paloma Faith and Florence and the Machine for intimate basement gigs. 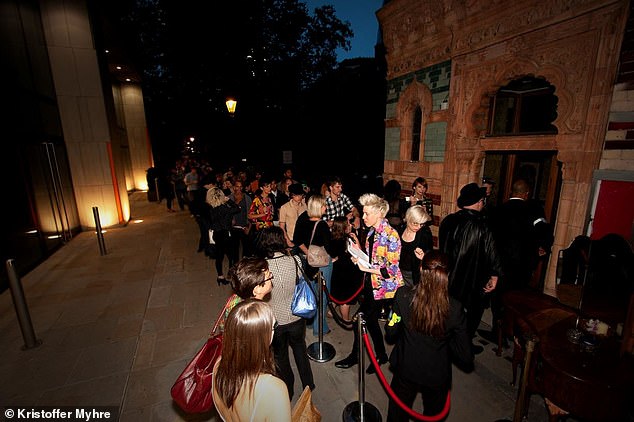 Tava procured a unique venue in a church yard near Liverpool Street station – a former 19th century Turkish bath house, which made choosing its name – The Bath House – easy. Pictured on opening night 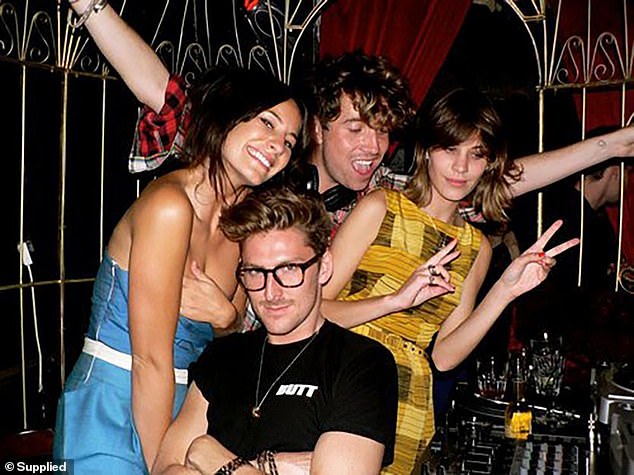 ‘It was intoxicating,’ she recalled. ‘From there I blindly and naively decided to open my own venue. I was in the industry at the right time, I made the right connections, scraped together a bit of money and the stars aligned. I ended up owning my own beautiful nightclub due to sheer balls and jumping in the deep end.’

Tava procured a unique venue in a church yard near Liverpool Street station – a former 19th century Turkish bath house, which made choosing its name easy. 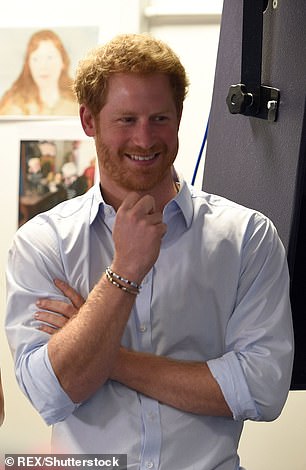 She gutted it and redecorated with a ‘slightly macabre’ vibe, lining the walls in red velvet, chandeliers and bespoke wallpaper designed from rubbings of the original tiles.

‘This venue survived the Blitz bombing and I say it’s a miracle it survived every weekend,’ she said. ‘It was packed. It was a word of mouth venue, with an ecclectic mix of guests.

‘Prince Harry came down and he was a perfect gentleman – the ideal guest. He had drinks, had dinner, tipped the staff really well, bought the staff tequila shots, had a really cool time. The club filled up, they bounced into the crowd for a bit, and then they were gone.

‘They were like dream customers, but super friendly, super into it, loved the atmosphere, loved the club. It was obviously really exciting for us – that same weekend we had David Schwimmer then Bill Murray. It was a huge celebrity culture but very much underground.

‘Sophie Ellis-Bexter and her husband did a club night there, they would be singing, walking through the crowd. We did another amazing club night with an incredible crowd, it could be Bjork walking around or Matt Smith… the crowd was more interesting than the celebrities. It was Studio 54, everyone was dressed up living this wild, incredible life for an evening.’

As glamorous as it was, Tava told how the industry was ‘very intense’ and goes ‘hand-in-hand with drinking and drugs’. 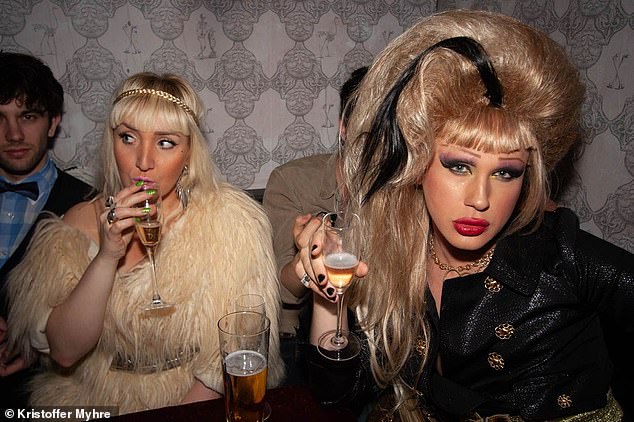 Tava gutted the club and redecorated with a ‘slightly macabre’ vibe, lining the walls in red velvet, chandeliers and bespoke wallpaper designed from rubbings of the original tiles. Pictured: DJ Jodie Harsh 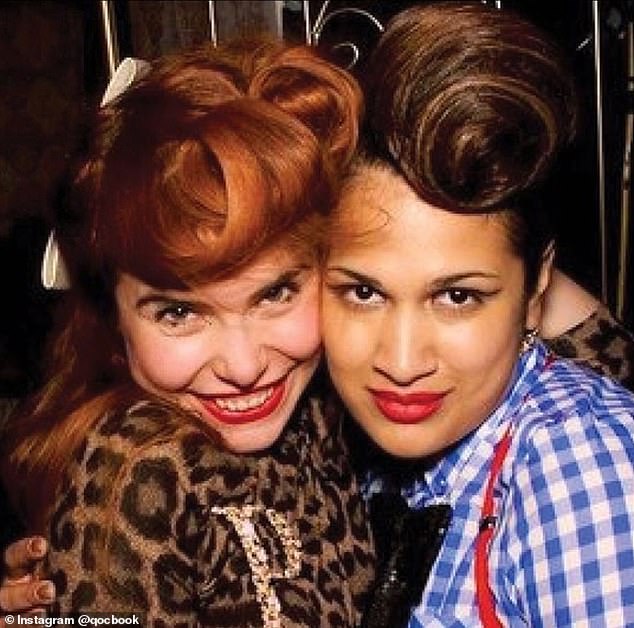 Keen to move with the times, Tava went on to open the boutique Baby Bath House in Stoke Newington, a cocktail bar with an underground club venue. Pictured left: Paloma Faith at The Bath House

‘It was a wild time which was fun, but equally debaucherous. We were working really hard and then unwinding harder,’ she said.

‘[We did cocaine] every night, five nights a week, with one night off and then one quiet night. It’s a miracle I’ve survived.

‘There are days when I passed out and woke up in A&E, I was arrested, there were nights when I was mugged, but you keep going.’

Keen to move with the times, Tava went on to open the boutique Baby Bath House in Stoke Newington, a cocktail bar with an underground club venue.

But after years of hard graft in the capital, Tava’s priorities began to shift; she and Rich were keen to start a family, and the couple moved to Brighton where they took on an almost derelict underground club across the road from the old pier. 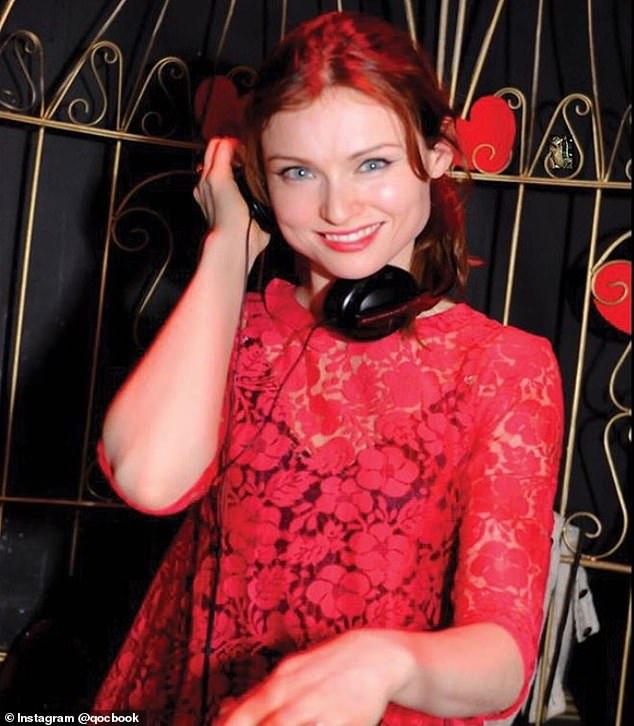 Tava said Sophie Ellis-Bexter and her husband did a club night at The Bath House and ‘would be singing, walking through the crowd’ 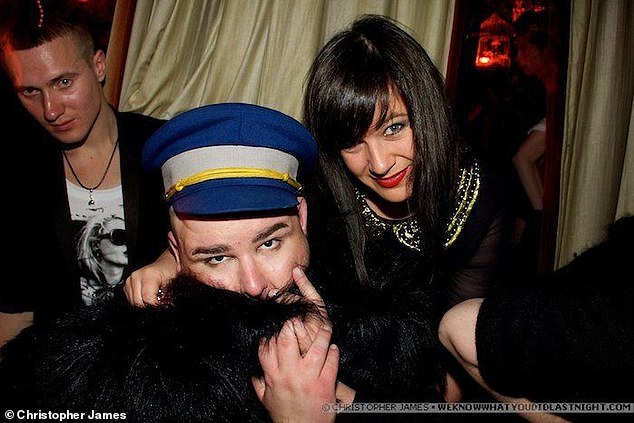 As glamorous as it was, Tava – pictured on a club night – told how the industry was ‘very intense’ and goes ‘hand-in-hand with drinking and drugs’

‘We wanted to move to the next phase in life – we were years behind our friends who were all getting married and buying houses, normal adulthood,’ she said.

‘Rich’s ultimatum was that a family would never happen in these circumstances – if we moved to Brighton, we had to be financially stable, no drink or drugs, and have a good manager in the new club.

‘We called it the Funfair Club. Before the days of Instagram photo booth trends, we had stylised rooms with interactive elements and live cutting-edge circus performers.’

After a few years of running the venue, Tava fell pregnant and had a daughter (now seven) – continuing to work right up until she gave birth.

But their happy time was tarnished when Tava received a call from the Brighton Chief of Police, accusing them of having a large number of underage customers. 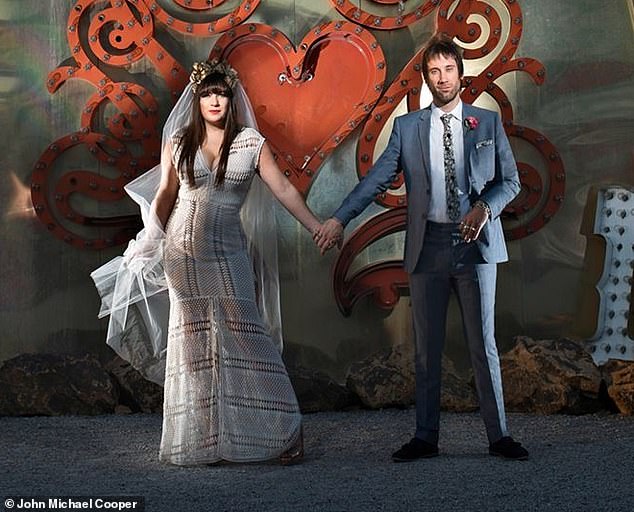 After a few years of running the Brighton venue, Tava fell pregnant and had a daughter (now seven) – continuing to work right up until she gave birth. Pictured in Las Vegas in 2017 with Rich

‘They sent us a dossier of A4 screen grabs of underage kids, circled in red pen. It turned out there was a guy in Brighton producing fake IDs, and he did a spectacular job. He was forging passports for thousands of people, and even managed to travel to Majorca on one,’ Tava said.

‘We worked with the police to save our licence. As a club owner, you follow the protocols around these things, but it was a real knock. As a mother, I didn’t think I had the strength to carry on. It’s a demanding 24-hour job, and I thought, for what?

‘I’d made a lot of sacrifices. I’d worked in the club until I was eight months pregnant; when my waters broke I was on the phone to my manager, and for the first nine months of our daughter’s life my partner took paternity leave while I went to work.’

Deciding they wanted out, Tava and her partner put the club up for sale – but on the brink of negotiating a lucrative sale, they received a letter out of the blue informing them they owed £200,000 in back rent. 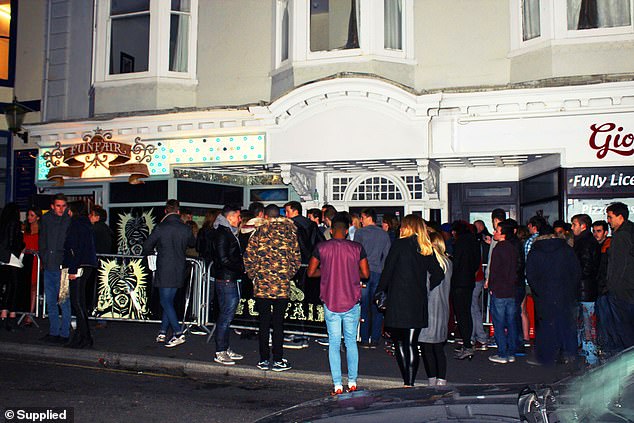 Before the days of Instagram photo booth trends, the Funfair club had stylised rooms with interactive elements and live cutting-edge circus performers. Pictured: the entry queue at Funfair

Tava explained: ‘The person I leased venue from had converted the upstairs into flats, holiday lets, without telling us, and then he sold the whole building.

‘As I paid him rent each month, he didn’t pay any of it to the new landlord. Then he filed for liquidation.

‘I was devastated. We got really good lawyers but there was nothing we could do. He was so clever; turns out he’s a very well known billionaire property developer and he does this to lots of people. There was nothing I could do except sell the club and hand over the money.’

With their financially stable future cruelly stripped away, Tava and Rich moved to Australia with less than £4,000 to their name, where they were forced to start again. 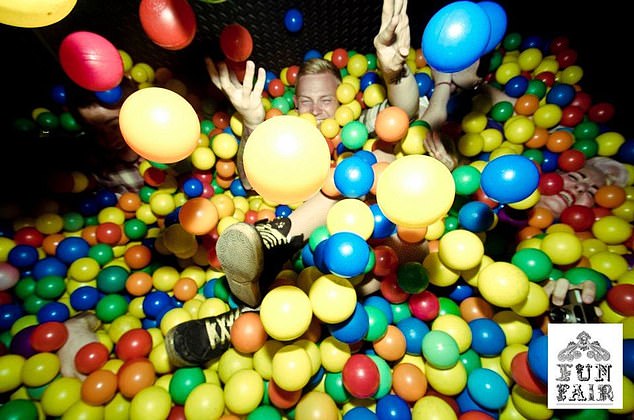 After working with the police to keep their licence following the problem with underage guests, Tava and Rich decided to sell up. Pictured: the ball pit at Funfair 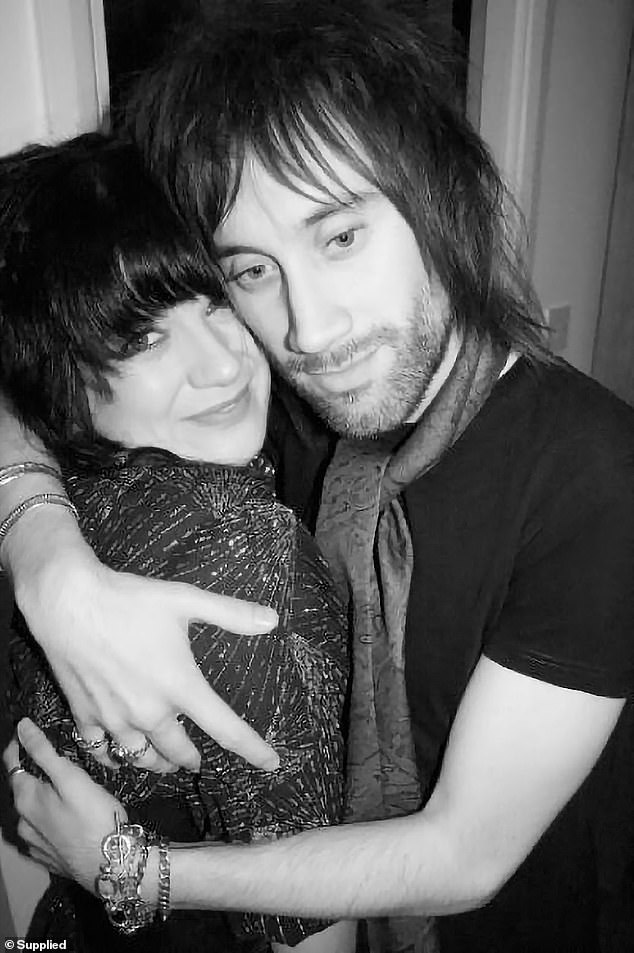 With their financially stable future cruelly stripped away after they were conned by a billionaire property developer, Tava and Rich, pictured together in 2008, moved to Australia with less than £4,000 to their name, where they were forced to start again

But walking away from the industry that had shaped her adulthood took its toll on Tava, and she admitted she hit ‘rock bottom’.

She became a highly functioning alcoholic, holding down a job as a creative director but finding solace in the evenings in a bottle of wine.

‘It was very glamorised mum drinking,’ she explained. ‘It was very much wine every night – it was my way to deal with so much stuff that I hadn’t dealt with. 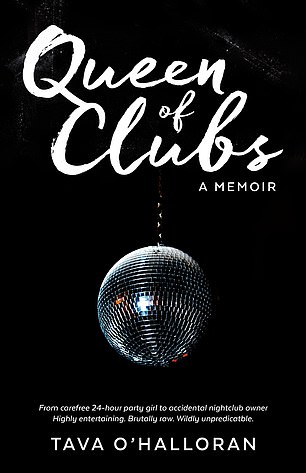 Queen of Clubs by Tava O’Halloran (£15.99) is published on September 3

‘I wasn’t able to deal with crashing disappointment. I didn’t feel like I fit back in when we got to Australia; I had an ideal of what it was going to be like, and it wasn’t.

‘It crept up on me really slowly. I didn’t realise I was really addicted because it was restaurants and Champagne and cocktails, it was around adults, dinner parties. I was a highly functioning alcoholic, no one would have known – to the point where I don’t think my husband knew.

‘I think the tipping point was when it affected for the first time my emotional abilities as a mother. I was too hungover to get up, make a packed lunch and drive my girl to kindergarten.’

Tava’s battle with addiction is one of the central themes of the book – as is the ‘once in lifetime love affair’ that is her marriage to Rich – a freelancer designer and DJ.

‘To this day I’m shocked he’s still around,’ she admitted. ‘But it’s a beautiful love story. We’ve both always been there for each other, and it’s this partnership and resilience that has got us through each stage.’

Queen of Clubs by Tava O’Halloran (£15.99) is published on September 3 and is available to purchase on Amazon. Join the Queen of Clubs virtual launch party via Instagram – https://www.instagram.com/qocbook/  For more information visit https://www.tavaohalloran.com/