From The Bachelor to the booze business! Chris Harrison, the intrepid host who is the frontman of the ABC hit and its many spin-offs, is embarking on a new career. Well, sort of.

Harrison, 48, recently partnered with the alcohol company Seagram’s to create Tropical Rosé, which is a new flavor in the brand’s Escapes line. However, the Texas native didn’t just lend his name and recognizable face to the libation — he actually played a significant role in creating it.

“So excited to officially announce my new drink @seagramsescapes #TropicalRosé is hitting store shelves all across the country over the next month,” he shared via his Instagram on Tuesday, February 25, listing off the many retailers that will soon sell the canned drink. “I was very hands on creating a flavor I know you’re absolutely going to love.” 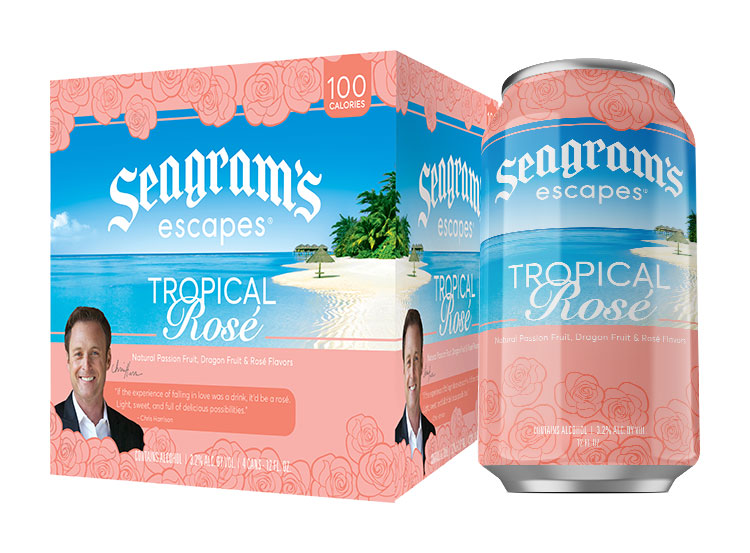 In the accompanying clip, Harrison urges fans to join him in a “world of delicious possibilities.” He describes the drink as “light and sweet with hints of dragon and passionfruit flavors,” and notes that he “helped create” the drink he hopes fans will “love.”

The fruit-forward drink boasts 3.2 percent ABV and contains only 100 calories per can. It also comes in light pink boxes decorated with Harrison’s mug and a beachy Bachelor in Paradise-esque theme.

And even though Tropical Rosé has yet to officially hit store shelves, the sparkling beverage already has the seal of approval from several key members of Bachelor Nation. In a follow-up Instagram post on Wednesday, February 26, the former Designers’ Challenge host posed with Bachelor in Paradise’s Annaliese Puccini, The Bachelor’s Tayshia Adams and Wells Adams, The Bachelorette alum who has served as the bartender on Bachelor in Paradise since the spin-off’s fourth season.

“Everyone is excited about my new @seagramsescapes #TropicalRosé hitting store shelves now,” Harrison captioned a series of snapshots of the foursome smiling and laughing with the new drink. “My family loves it and I know you will too.”

“Finally, Harrison is making me drinks!!!!!” Wells, 35, who is engaged to Modern Family actress Sarah Hyland, quipped in the comments.

Though this is the first time Harrison has helped created a Bachelor-inspired libation, he’s hardly the first person in Bachelor Nation to give booze a try. The Bachelorette alum Kaitlyn Bristowe launched her own wine line in June 2019, which promptly sold out. The Bachelor also created a three-wine collection that debuted in December 2016.