‘I could LIVE in here!’ Blogger mom wows Instagram with her enormous and VERY lavish LAUNDRY ROOM that boasts four washing machines, marble countertops and bouquets of flowers

A blogger has seemingly found the solution to making laundry less of a chore: build yourself a laundry room that is so lavish, you never want to leave.

Mother-of-two and influencer Rachel Parcell, 29, wowed her one million followers on Tuesday when she posted images of her incredibly luxurious laundry room, which boasts four washing machines and dryers, as well as marble counter tops, freshly-cut flowers, and a slew of storage.

‘Dreaming of spring and my laundry room is giving me all the feels,’ Rachel, who lives in Alpine, Utah, with her real estate developer husband Drew, 34, and their children, wrote alongside the five photos. 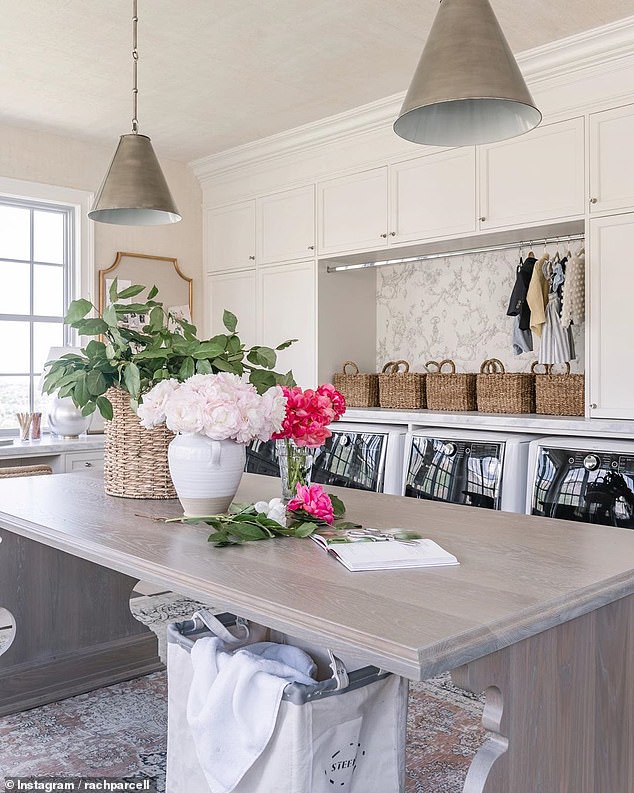 Bliss! Blogger and mom Rachel Parcell has wowed Instagram with images of her luxurious laundry room, which she shared on Tuesday evening 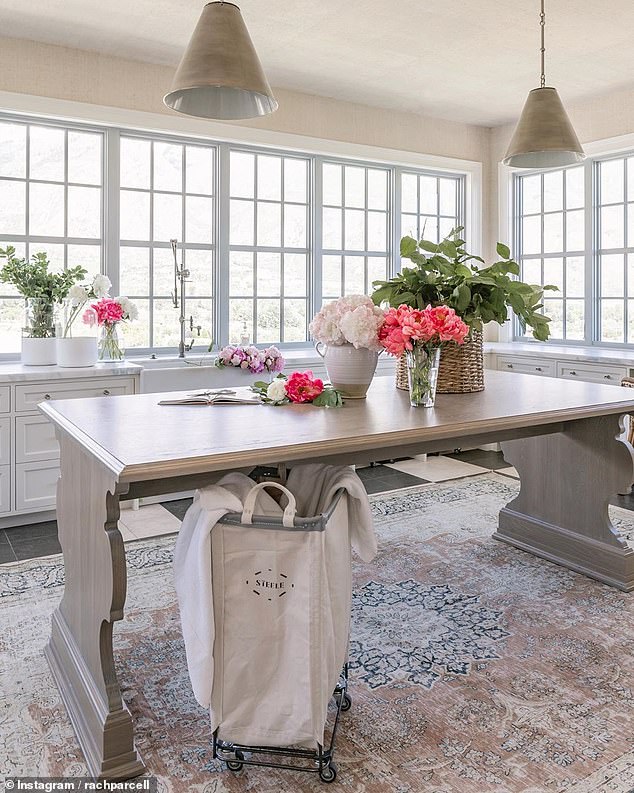 Envy: The 29-year-old, who lives in Utah with her husband Drew, 34, and their two children, said on Instagram that her laundry room makes her think of springtime 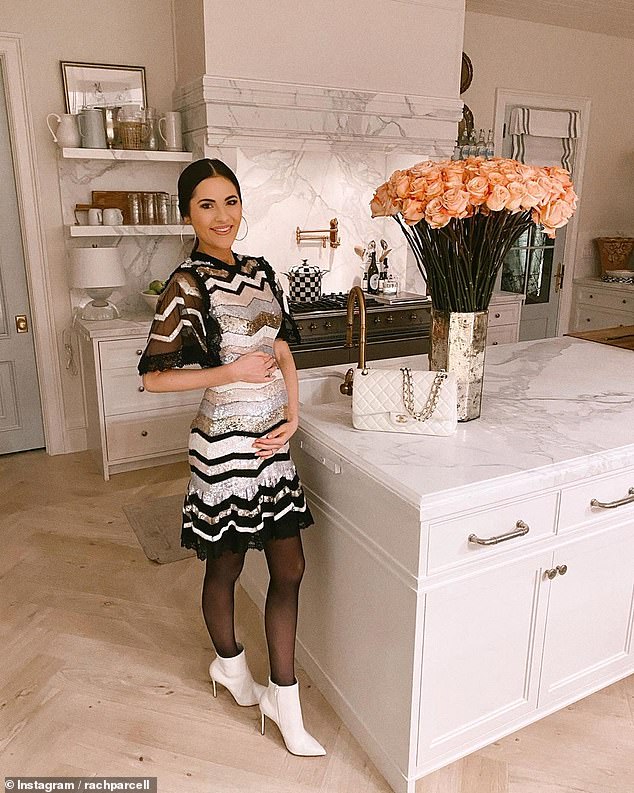 Follow along: Rachel, who is currently expecting her third child, regularly shares glimpses inside her stunning home, which she and her husband built from the ground up

She then added: ‘So excited for blooms and sunshine!’

The photos capture the room from every angle, with Rachel revealing a perfectly-designed room that features plenty of space for organizing, hanging, folding, and anything else you might need to do with your laundry.

As well as the marble counter tops and numerous drawers, the space features a large table at its center, which holds two vases of freshly-cut flowers, as well as a big potted plant.

There are several other flower-filled vases scattered elsewhere in the room – while a bunch of peonies are seen poking out of the side of a large farmhouse sink.

Four modern-looking machines – believed to be two washers and two dryers – are seen fitted into the storage space, with a selection of handy baskets placed above them, as well as a small hanging rail on which several children’s clothing items are dangling.

In fact the only thing that looks in any way disorganized in the space is a wheelie laundry basket placed under the central table, out of which a few perfectly-white towels are seen hanging.

Two more of the baskets have been placed in specially-designed alcoves under the sink, while several wicker stools can be seen sitting to the side, presumably there in case Rachel or a member of her family wishes to rest, relax, or simply enjoy the space from another vantage point.

The room is not entirely focused on laundry however; there are several pieces of art seen hanging, and in one corner Rachel – or perhaps an interior designer – has placed a framed pinboard on which there are several notes, photographs, and drawings.

Rachel, who boasts her own eponymous fashion line, has also tacked up a couple of sketches of what look like her designs, and two glass jars filled with pencils and pens sit alongside it, suggesting that she uses the space to draw and plan out her new collections.

What is perhaps most impressive of all however, are the incredible windows that seem to cover three of the room’s four walls, providing plenty of natural light, and some impressive views of the surrounding Utah scenery.

Although Rachel, who is currently expecting her third child with husband Drew, simply noted that her laundry room is giving her ‘all the feels’, her followers were much more vocal about the emotions that the space brought out in them.

The Instagram post racked up close to 16,000 likes in a matter of hours, while hundreds of people shared comments on the post, with many expressing jealousy over the stunning space. 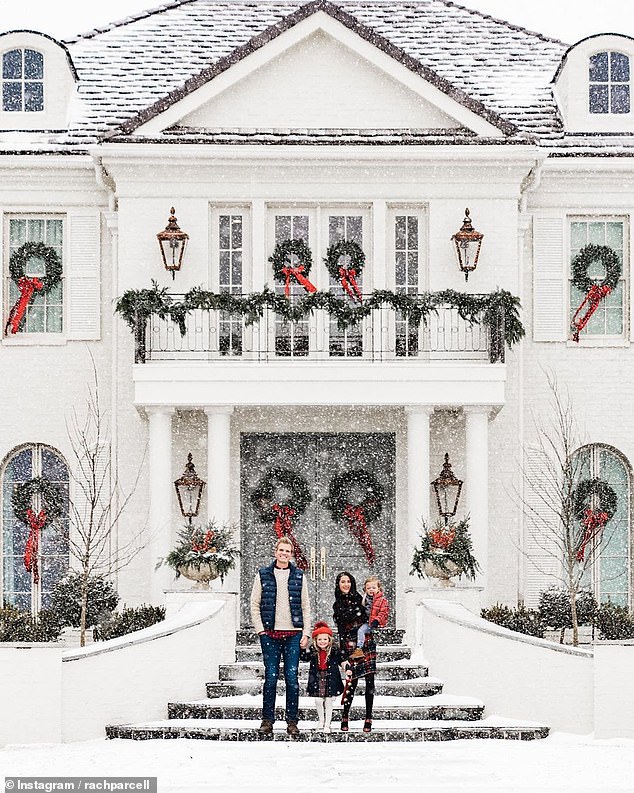 Family: Rachel’s husband Drew is a property developer and contractor, and the couple started building their home back in 2013 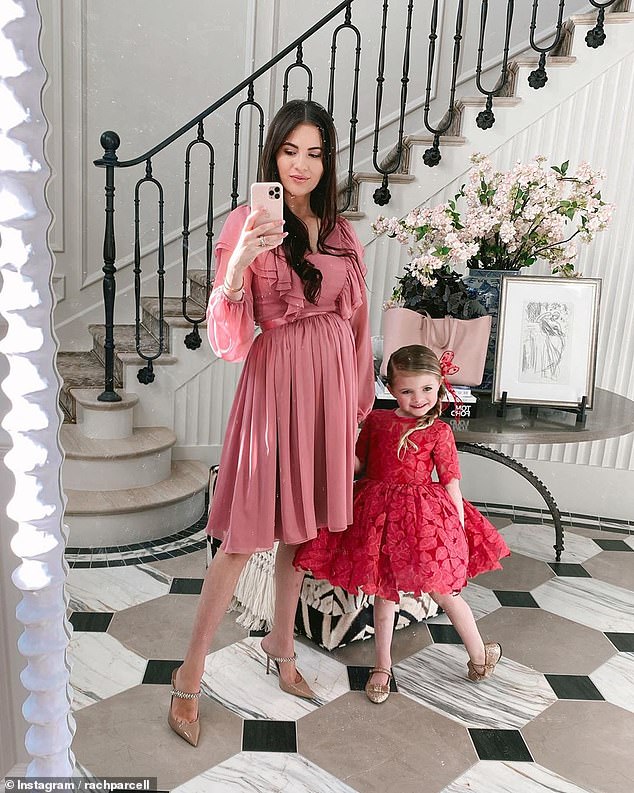 Sneak peek: As well as showcasing specific rooms on her blog, Rachel, seen with her daughter, also offers up glimpses inside her home through her daily posts on Instagram 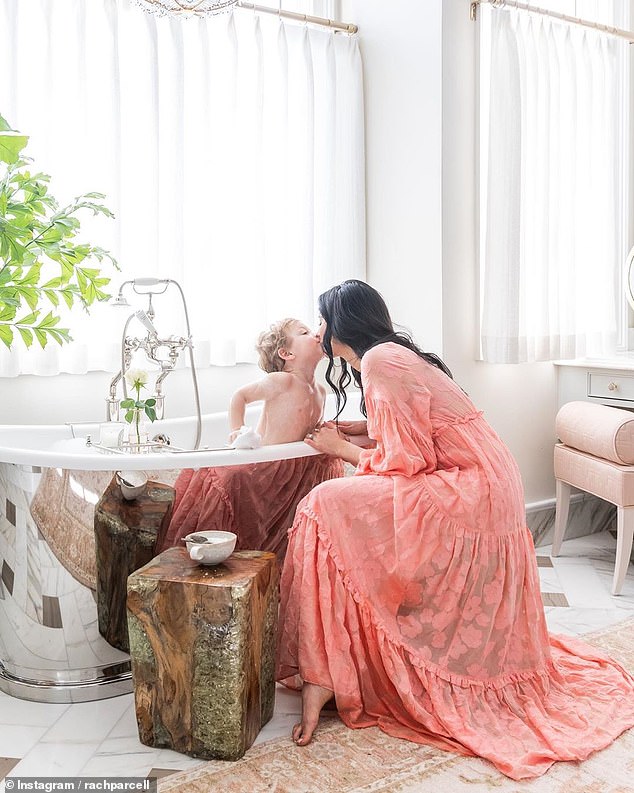 Lush life: The blogger, pictured with her son Bear, recently revealed the inside of her master bathroom, which boasts a huge silver tub

‘It’s incredible. I’d do laundry all day if I had this set up!’ one person commented.

Another then chimed in: ‘I think all of your laundry stress would go away if this was to laundry room. Beyond gorgeous!!!’

Others confessed that they wouldn’t mind actually living in Rachel’s laundry room, with many remarking that it certainly looks big enough to compete with their current homes.

‘When you suddenly feel like you’d be totally okay with living inside this laundry room for the rest of your life,’ one user wrote, while another added: ‘This laundry room is nicer than any room in my house.’

‘Her laundry room is nicer than my whole house,’ a third person agreed.

Some criticized Rachel for showing off such a lavish laundry space, with one person remarking: ‘Could you tell me about your charitable donations? I’m wondering if you ever feel guilty living like this when so many have so little.’

However the critical commenter was quickly shut down by Rachel’s most dedicated fans, with one insisting, ‘It’s not your business!’ while another wrote: ‘She’s explained several times and I think even earlier this week that 10% of her earnings she donates to charitable causes or to her church…but not that she owes anyone an explanation.’ 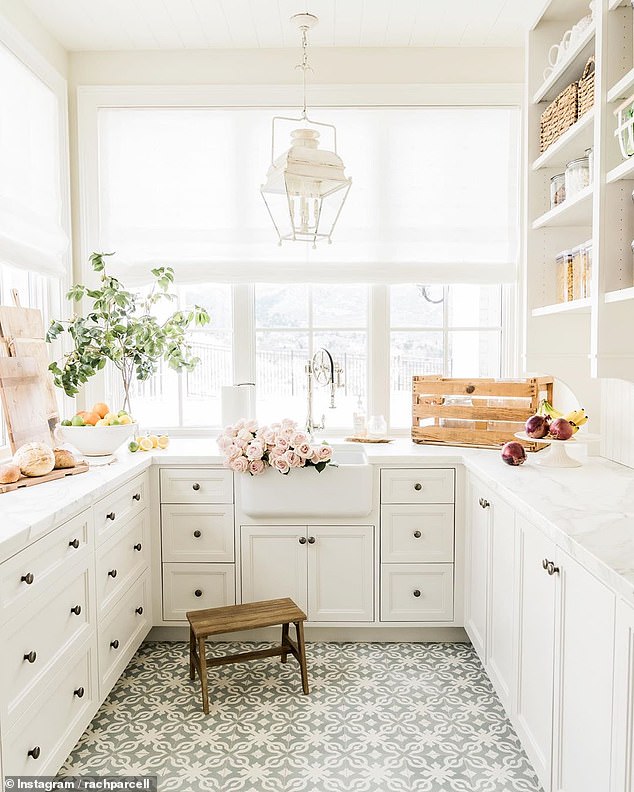 Dream: Rachel’s pantry features similar decor to the laundry room, and even has a matching farmhouse sink filled with pink flowers 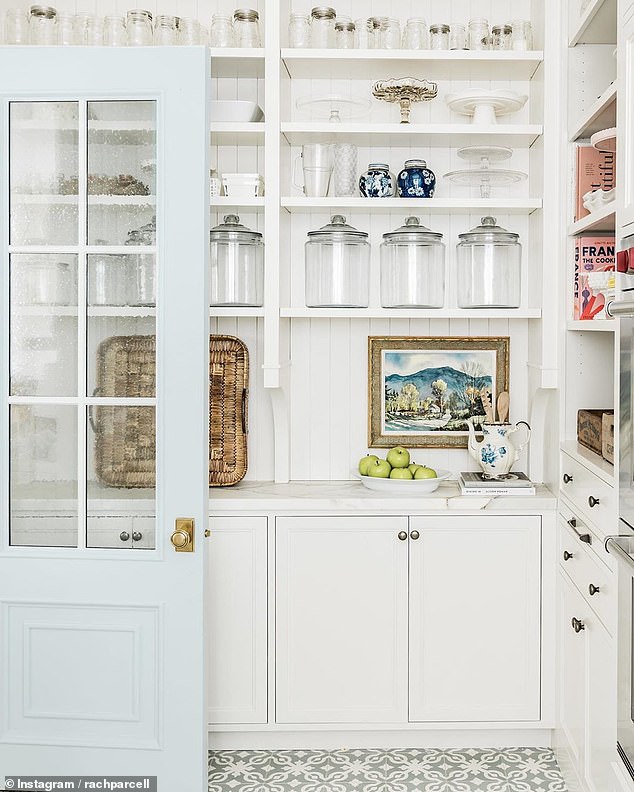 Organized: The room is filled with built-in storage, however that hasn’t stopped Rachel from decorating with a few pieces of art and several ornaments 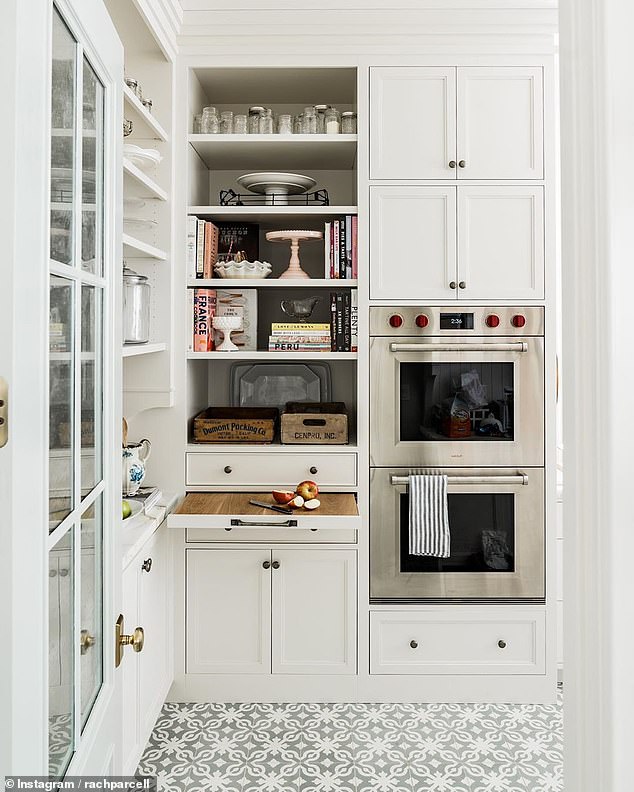 Handy! The pantry even features its own oven, and has a hidden chopping board that slides out of the wall 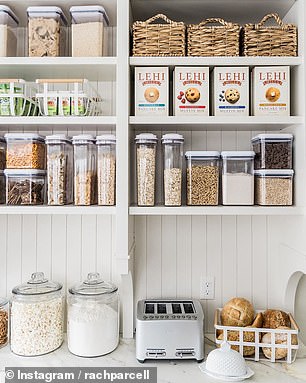 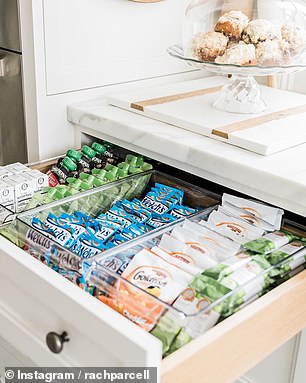 Food favorites: The snacks and kitchen supplies in the pantry and perfectly organized in various tupperware and acrylic boxes

Writing about her laundry room design on her blog, Rachel explained that she wanted to create ‘an inspired space’ both for herself and her children to enjoy.

‘I wanted an inspired space to do laundry and work on art projects with my kids so I added a window on every possible square inch I could,’ she wrote.

‘There’s just something about natural light that completely changes my mood. When we were in the drawing phases, Drew and my architect thought I was crazy but they both have apologized and told me I was right about the windows haha.

‘I love that light to pours into this space and we capture as much as our mountain view as possible.’

She continued: ‘I love the large island, it makes doing laundry more painless and it’s been so great for sorting colors and folding. My designers wanted the island to feel more like a vintage furniture piece rather than a massive built-in, it’s so much lighter in the space since it’s a table rather than a full block of drawers and wood.

‘We went back and forth on whether or not we should double it up but I’m so glad we did because we can get double the amount of laundry done and we don’t need to wait around while a load finishes to start another. 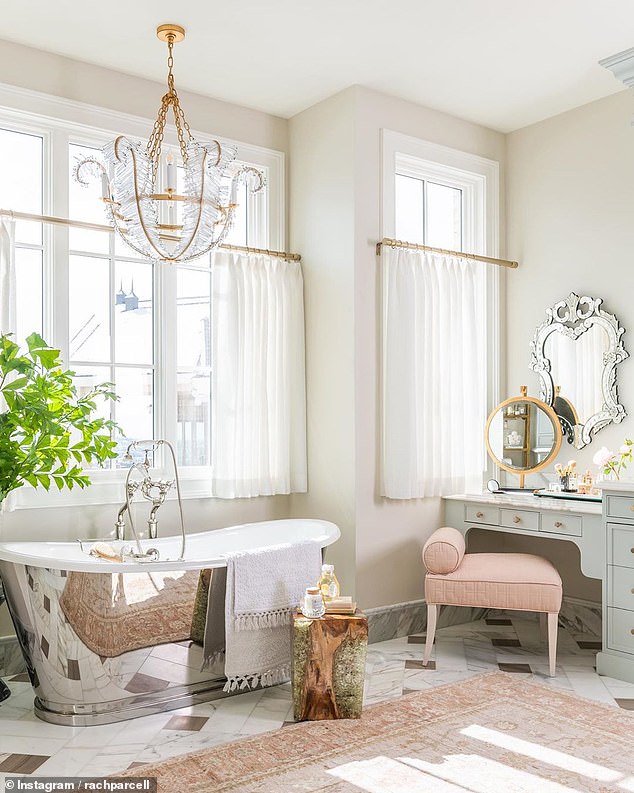 Rub a dub: Rachel’s master bathroom features a free-standing bathtub, a pretty vanity, and even a feather-shaped chandelier 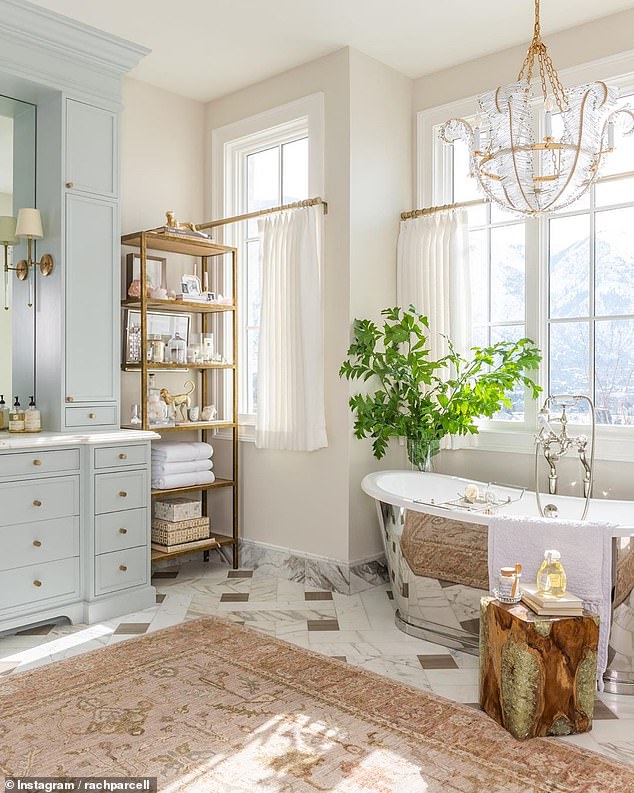 Watch out: Much like the other rooms in her home, the bathroom also boasts plenty of windows, allowing for pretty views of the surrounding mountains 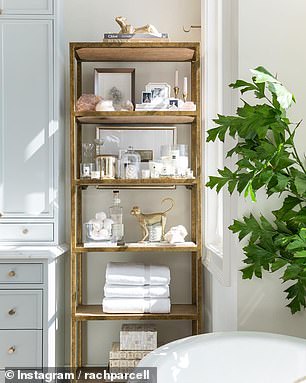 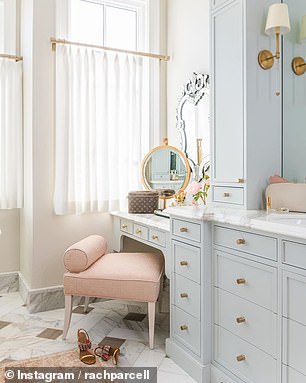 Spacious: The bathroom also features a great deal of built-in storage, which Rachel has ensured she has decorated to perfection 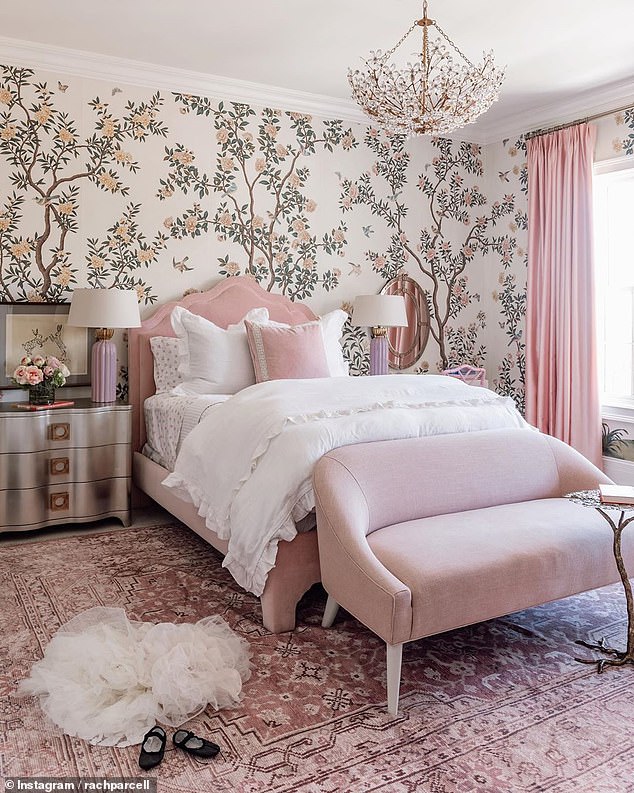 Sweet dreams: Even Rachel’s daughter’s room is an interior decor dream, with patterned wallpaper, a beautiful floral chandelier, and fresh-cut flowers on the bedside table

We also did a nod to our blue windows in our last home in this space. It took us three different paint jobs to get it right. It was kind of a nightmare. It went from seafoam green, to purple blue to this icy blue. Luckily we finally got the color right!’

Although it is the most recent interior post to take Rachel’s Instagram by storm, the laundry room is not the only space in her home to wow her followers.

Each one of the posts has proven incredibly popular with her followers, with each one racking up tens of thousands of likes and hundreds of comments.

Rachel’s most dedicated followers have been able to watch the blogger build the house quite literally from scratch after she began documenting the process back in November 2013, when the sprawling property was only just in the beginning stages of being built.

Since then, the soon-to-be mother-of-three has delighted in sharing different aspects of the interior design process with her followers, revealing her tips and tricks for achieving similar results in their own homes, while even – in the case of the laundry room – sharing how to copy her style for less.