Circus Oz has been partying all year.

Its 40th anniversary celebrations have encompassed a veritable feast of circus, from the festival of experimental fare at Sidesault to its most recent show, Tutti, a spectacular acrobatic concert performed with the Melbourne Symphony Orchestra.

That last one set a high bar for its last big bash. How do you outsize an entire orchestra? For artistic director Rob Tannion, the answer was obvious. You crank up the amplifiers, book the best band in the world and make an “unapologetic, absolutely in-yer-face circus rock opera” with them. 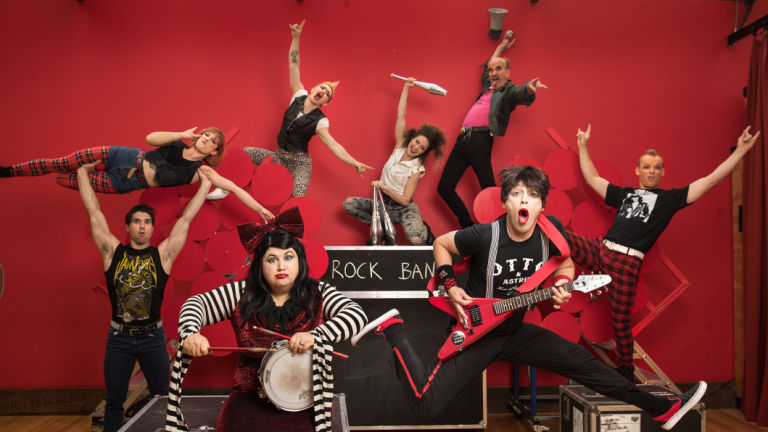 Foo Fighters and Radiohead were unavailable, apparently, but a quick internet search led Tannion to Die Roten Punkte (The Red Dots), who have a song called The Best Band In The World, and the idea for Rock Bang was born.

If you haven’t heard of Die Roten Punkte, you don’t get out enough. The krautrock comedy duo – German siblings Otto and Astrid – blend a hilarious double-act with an eclectic blend of original songs, and their concerts are always packed with audiences who want the joy of rock satire without losing any of the soul or sound.

I catch up with Otto and Astrid immediately after a photo shoot. Otto has been wildly leaping around, air-shredding an electric guitar, and making love to the camera with a shamelessness that has the whole room in hysterics.

“We spent the entire first year of our rock career learning how to pose,” he admits, as he and Astrid tag-team their way through the tragic history that Rock Bang will lay bare.

The sibs trace their unlikely beginnings to the fatal incident that killed their parents when Astrid was 12, though how they died will depend on who you ask. And the orphans faced further abuse from a nasty aunt and uncle. (“They made us chop wood,” says Astrid. “They made us do folk-dancing in squirrel costumes,” adds Otto.)

But the trauma unleashed their talents. They took up toy instruments, rode Zelig-like into Berlin as the Wall came down, and sang and played (and posed) their way to becoming the rock legends they are today.

Most of their work riffs off the series of unfortunate events that kick-started their career. “Our shows are like mini rock operas already,” Astrid says, and Rock Bang will be a sort of culmination, telling their whole dark story with the added thrill and spectacle of acrobatic display.

Circus Oz has always prided itself on the versatility of its performers, and Tannion has used a fusion of circus, choreography and music – the acrobats also act as back-up singers and play instruments themselves, while Otto has been preparing a circus surprise of his own – one that promises to go all out with rock concert appeal.

Watching the cast practise Robot/Lion (a silly and incredibly catchy song, about a robot who dreams of being a lion, that sounds like mash-up of Kraftwerk and New Order), it looks like it will be a hoot.

Anna Tegloan’s design makes it look like a glam music video, the costumes will have a touch of Eurovision, the sound is funked up by musical director Casey Bennetto (the man behind Keating! The Musical), the choreography will make you giggle and want to join in.

If Otto and Astrid’s songs sometimes mock the pretentions of rock’n’roll, they’re also bangers in themselves. No one should be in any doubt that it’s a rock concert they’ll be seeing, and Otto tells me guitar company Maton has designed an electric guitar, complete with flames, just for the show.

The spirit of rock and the spirit of circus echo each other, and it was hard not to be reminded, when Astrid said she was partial to sleeping overnight in the rehearsal space (“they have crash mats and blankies”) of all the acrobats who used to sleep on the floor of the Pram Factory back in the earliest days of Circus Oz.

It’s the spirit of the outsider, Tannion says, that attracted him to collaborating with Otto and Astrid, as well as how much fun they have creating a space to be wild inside, an ethos shared by Circus Oz.

Rock Bang will be huge, festive and spectacular, not to mention very funny. Anyone who loves rock, who loves clowning and comedy and circus, won’t want to miss it.