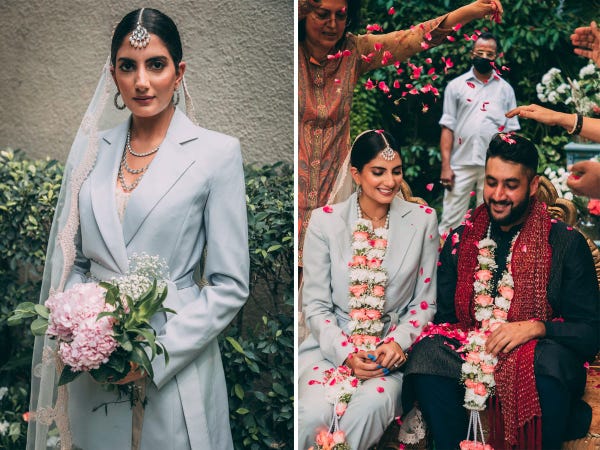 It seemed like Sanjana Rishi and Dhruv Mahajan were destined to meet. 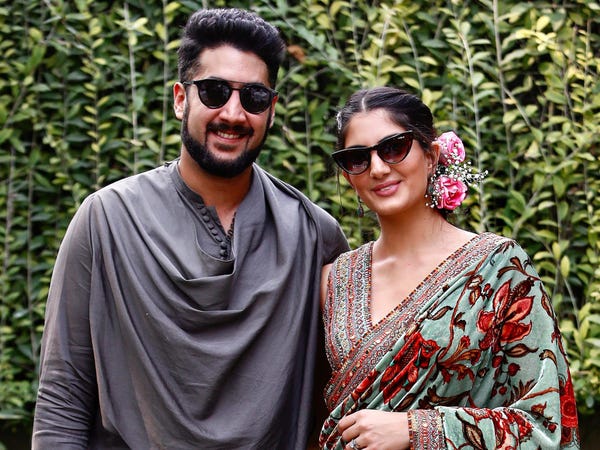 "His best friend is my best friend's sister, so we were bound to meet," Rishi told Insider.

The couple is based in New Delhi, India, where Rishi moved back to after living in the United States for 16 years.

The couple got engaged in February of 2020. 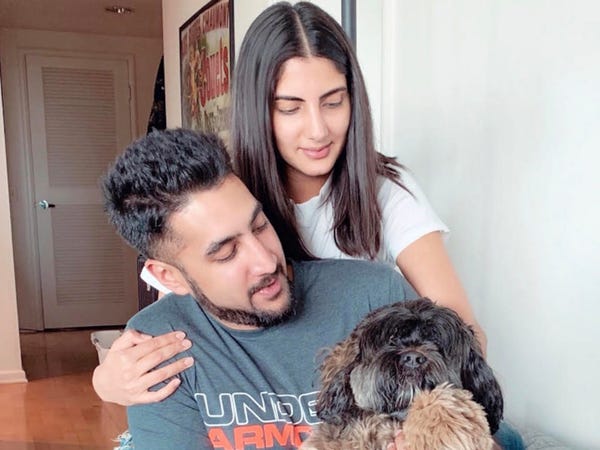 "We lived together for about nine months prior to the engagement, which is pretty out of the ordinary for Indian culture," Rishi said.

"By the time February came around, he was sick of hearing me complain about him not having proposed yet," she joked.

Rishi and Mahajan were originally going to get married in the US, but the coronavirus changed their plans. 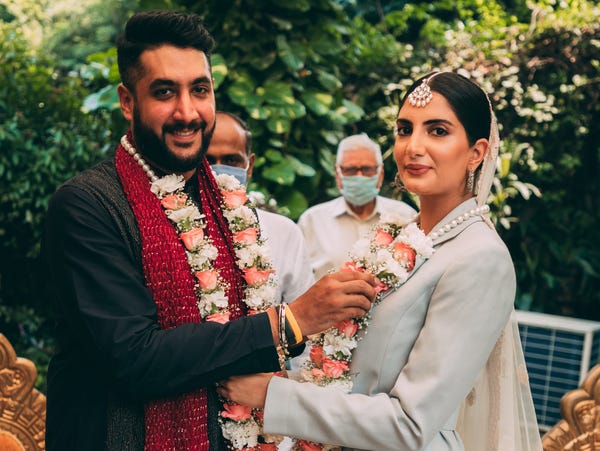 "We were planning a big Indian wedding celebration spanning months, basically — until COVID hit," Rishi said, adding that they had originally planned a civil ceremony in the US for September and a November ceremony in India.

"I continued wanting to hold off on getting married until we were able to get to the states, but one day we woke up and just wanted to be married to one another," the bride told Insider. "We wanted to get married quickly and with as little fuss as possible."

The couple ended up pulling together an intimate wedding ceremony in just two weeks. 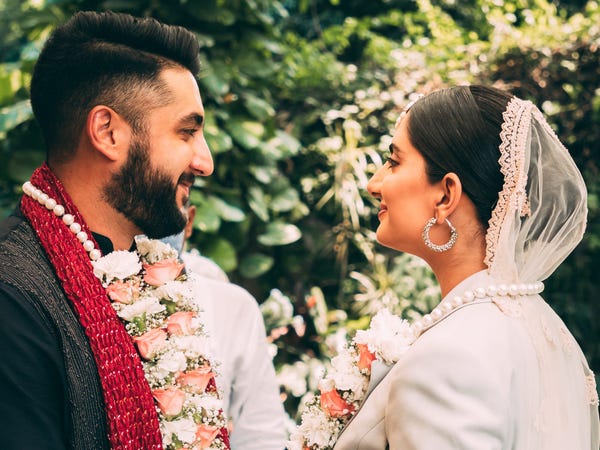 The wedding took place in September 2020.

Only the couple's immediate families attended the small event, which took place in the backyard of Mahajan's parent's home, where he grew up.

Rishi had always planned on wearing a suit to her wedding. 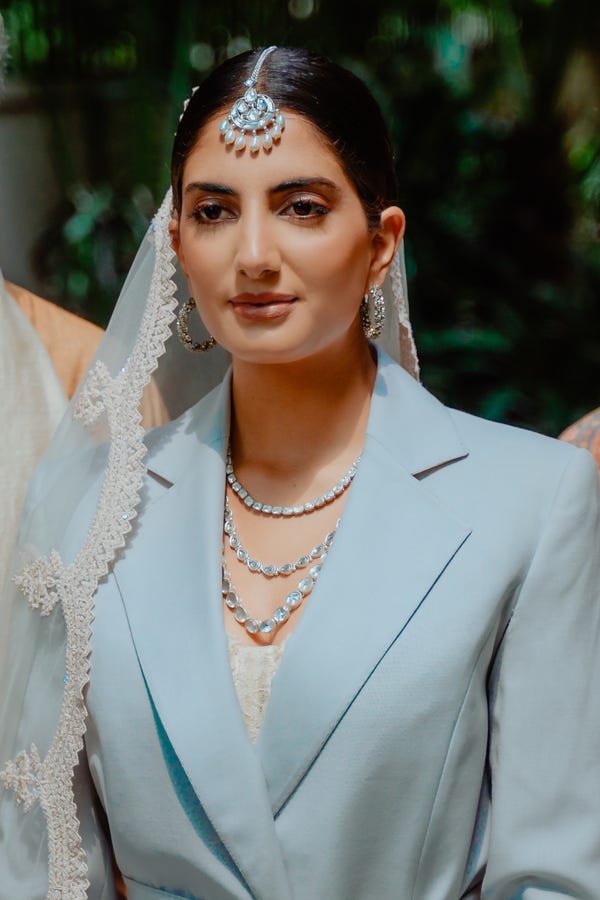 "I love suits on women," Rishi said. "There's something powerful about them."

Rishi originally planned to wear a suit to her American ceremony and a more traditional wedding ensemble to her celebration in India.

But when their plans changed, Rishi decided to wear a suit to her Indian wedding ceremony. 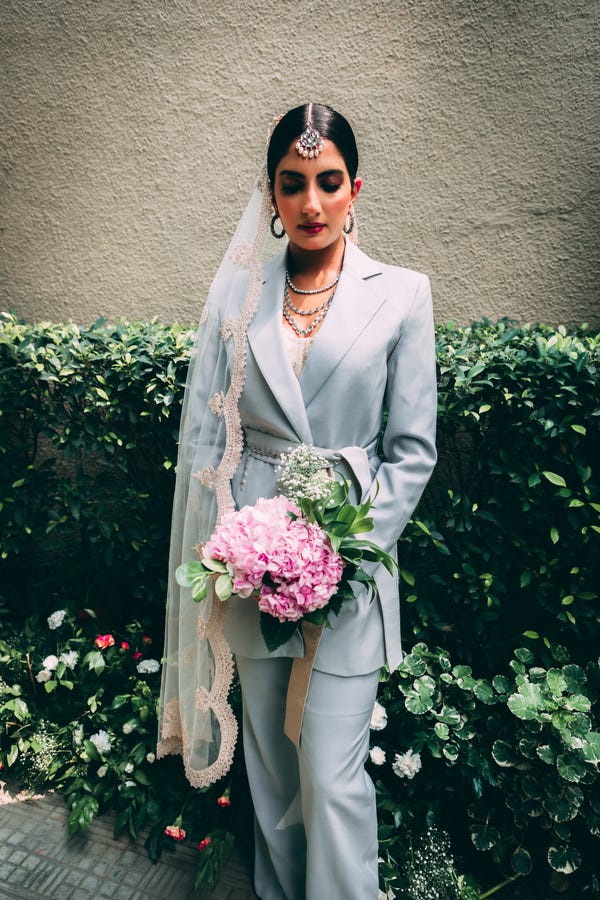 "When the plan changed, my commitment to a suit remained steadfast," Rishi said. "I was determined to hold on to the one thing I could keep control of with my COVID wedding."

She chose a vintage, pre-owned Gianfranco Ferre suit in powder blue that she bought at an Italian boutique.

A statement bustier and jewelry completed the look. 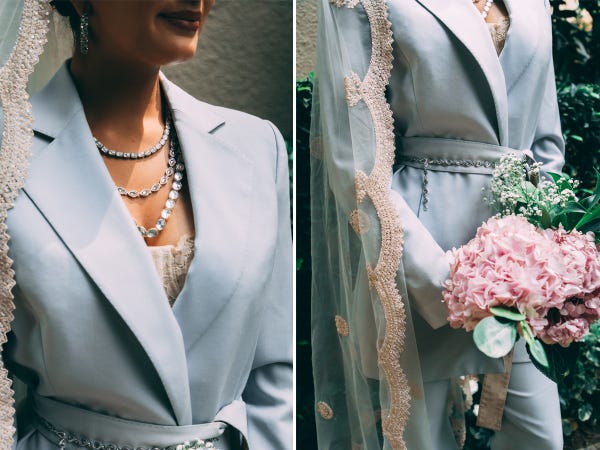 Rishi borrowed her bustier and earrings from friends.

"The veil was made for me by an Indian studio called Torani, and my jewelry was designed by the amazing jewelry designer Anu Merton, who basically made all my jewelry within four days," she said. 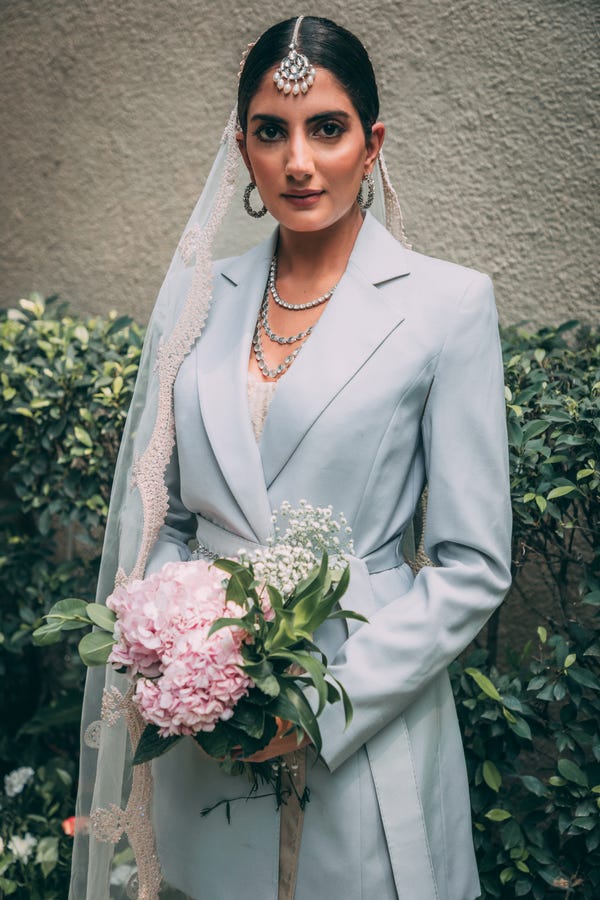 "Since our guest list was 11 people including the bride and groom, a heavy outfit just didn't make sense," she added.

She also wanted to prioritize eco-consciousness with her look. 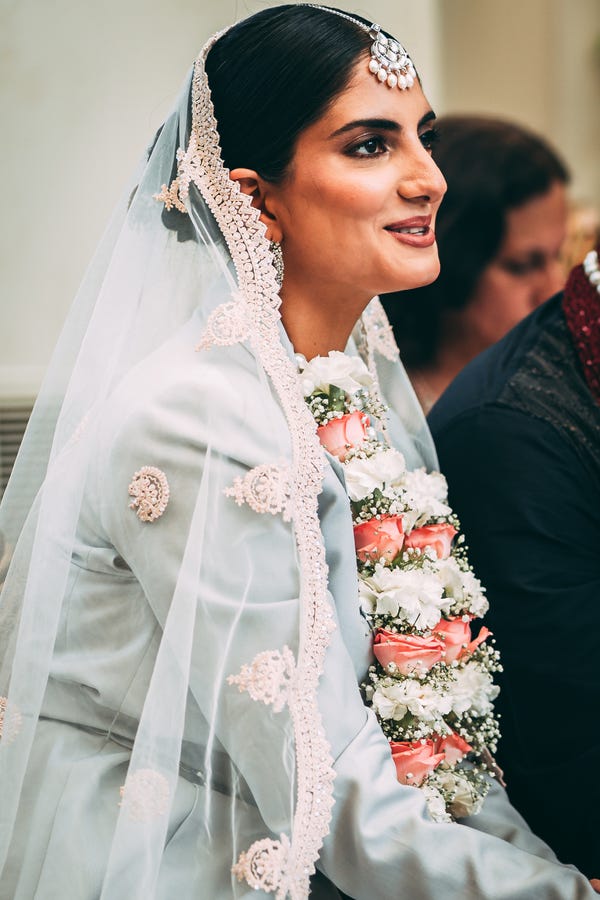 Rishi told Insider she has been trying to explore and support more ethical and local brands in India and all over the world.

"I have loved thrift shopping for many, many years, and buying secondhand is, in my opinion, one of the very best ways to shop ethically," she said.

"It made sense to me to combine something vintage with something that celebrates local craft, like the veil or the jewelry," she added.

Rishi also incorporated items from loved ones who couldn't be at the ceremony into her look. 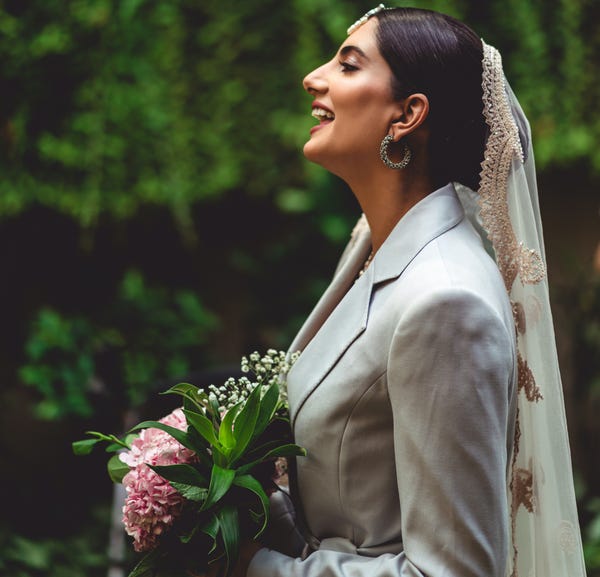 Wearing her friends' bustier and jewelry made them feel close by, for example.

"Even my bouquet was plucked right out of a gorgeous arrangement I received from my close friends the night before," Rishi told Insider.

Rishi felt confident in her outfit on her wedding day. 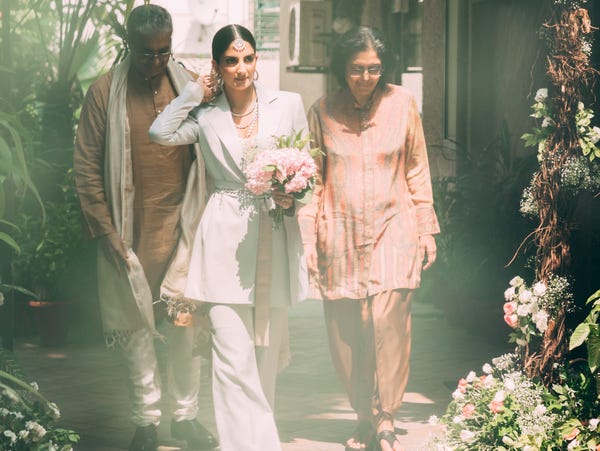 "I felt like an angel sent from heaven to bless my husband with my good looks," she jokingly told Insider. 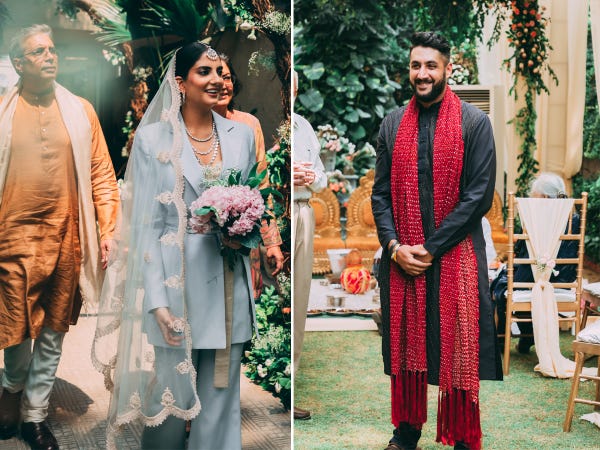 "He thought it was very me and worked perfectly for the ceremony," Rishi said of her husband's reaction to her wedding day look.

Rishi told Insider photos from her wedding day started making the rounds in Indian bridal magazines, and people had mixed feelings about her look. 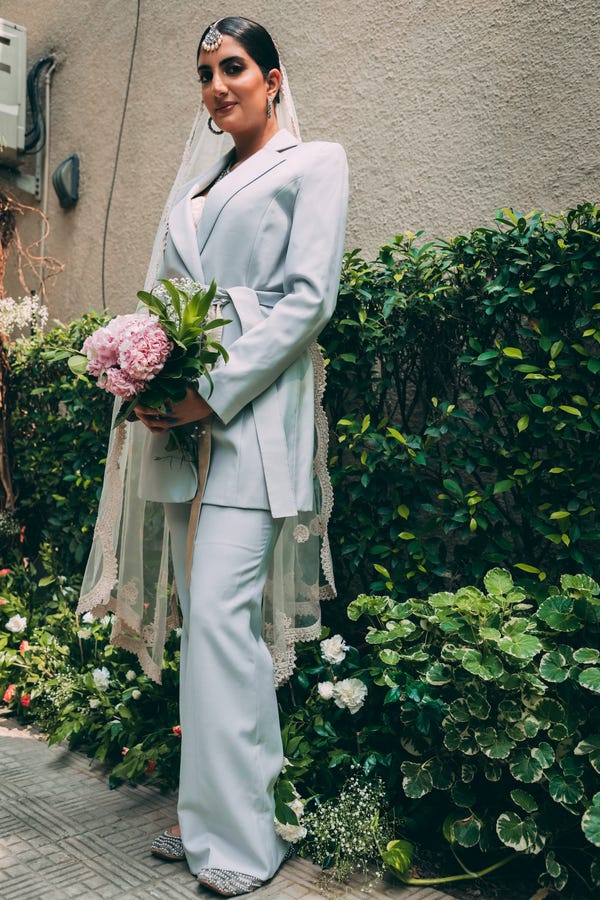 "The look was unconventional," she said. "People either loved it or hated it."

"Many thought I was making some kind of statement against my culture, but that was not the case," she added. "I love Indian clothes and wear them all the time to non-Indian weddings."

The suit is just what felt right for her on her wedding day.

Rishi also felt grateful her family was supportive of her look. 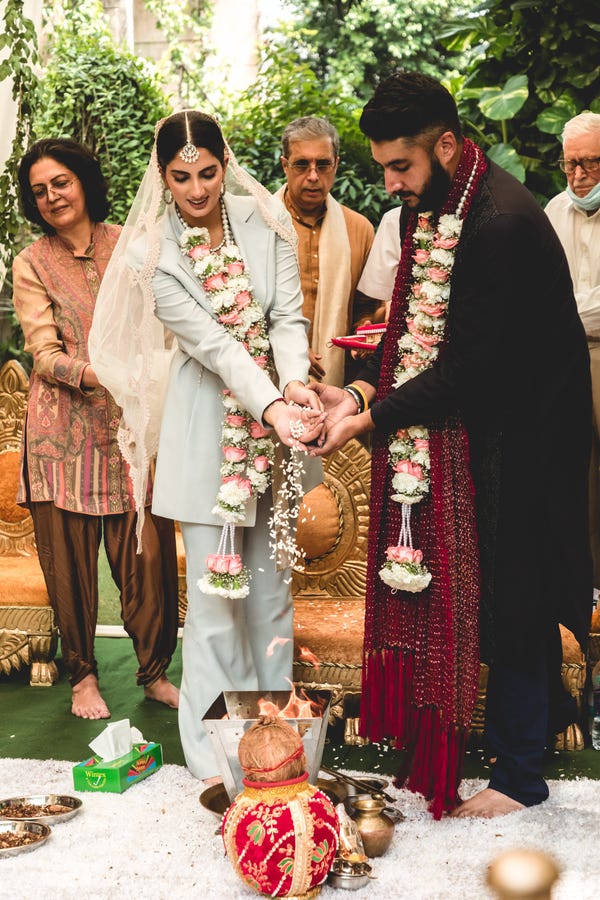 "Many said it was bold, so I recognize that it is a privilege to be able to wear what you like," she said. "I'm lucky I have a family that supports me."

Rishi's favorite part of her wedding day was the downtime she had with her family. 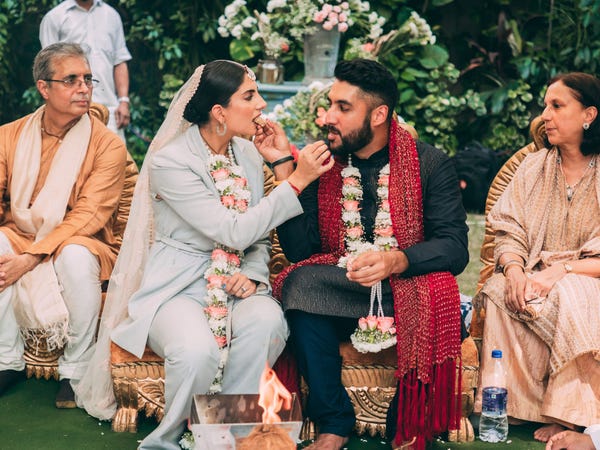 She told Insider she loved "eating home-cooked food with all four of my grandparents after the ceremony."

Rishi loves that Mahajan accepts her for who she is. 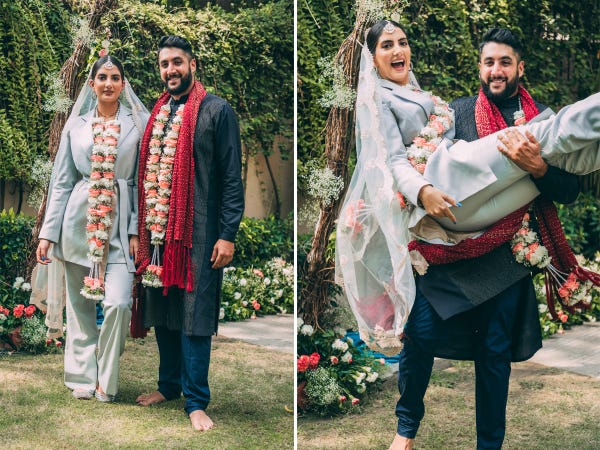 "He's super laid-back and lets me be completely insane," she said of her husband. "Bless his heart."

"What you wear is a form of self-expression," Rishi said. 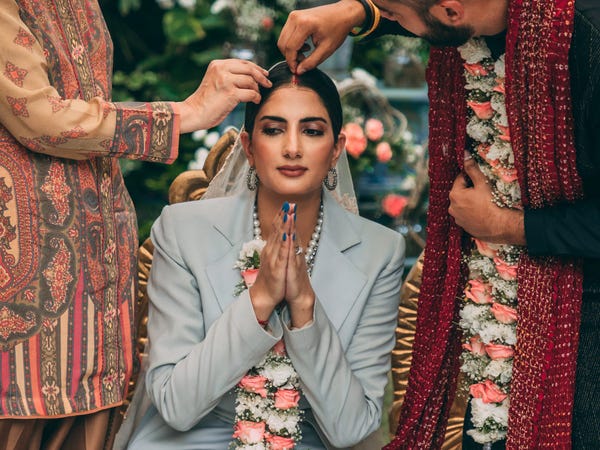 "You shouldn't have to confine that into any box if you don't want to," she told Insider.

"Remember that the wedding is not about your outfit," Rishi advised other brides. 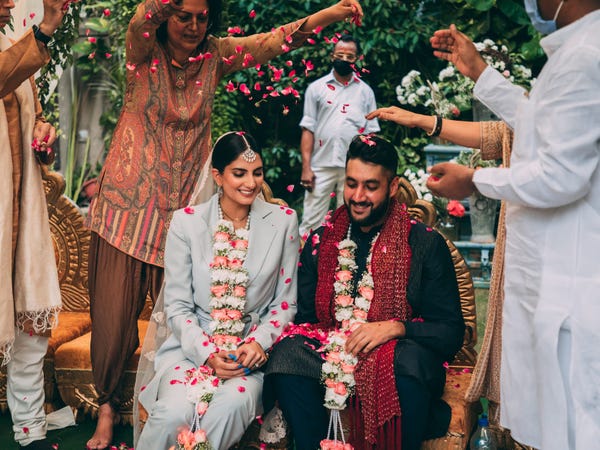 "If you make and are able to honor a lifelong commitment to your other half, who cares how traditional or out-of-the-box your outfit is?" she said.

If you are in the process of shopping for your wedding dress or have photos from when you shopped and want to talk to Insider for a story, get in touch at [email protected]