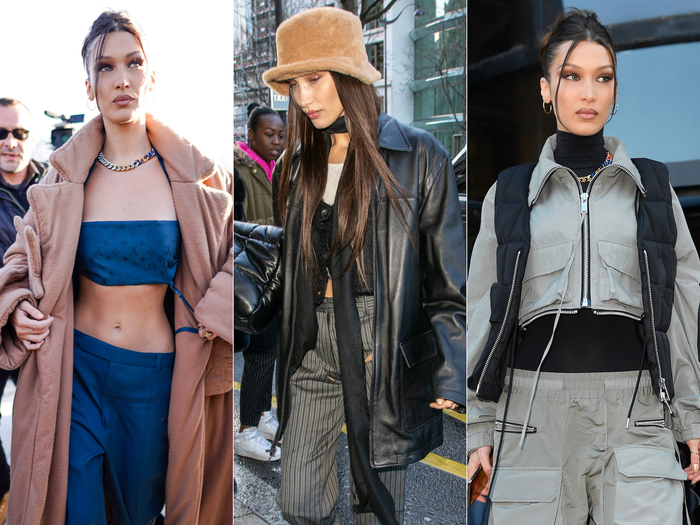 In recent years, celebrities have revived fashion looks that were popular in the 2000s, such as denim-on-denim and logo-covered outfits.

From Kendall Jenner, who was photographed wearing the exposed thong trend while out in New York City in August, to Olivia Culpo's recent 2000s-inspired outfit that included leather pants with cutouts — today's pop culture icons are drawing inspiration from fashion trends of a bygone era.

Bella Hadid is one star in particular who often embraces styles from the early 2000s. She's rocked everything from baggy sweatpants and a graphic T-shirt to a mesh top with ripped jeans. She's even added a stylish spin to divisive trends from the decade, like puffer vests and cargo pants.

Hadid channeled the 2000s with her metallic pants and matching newsboy cap and blazer. 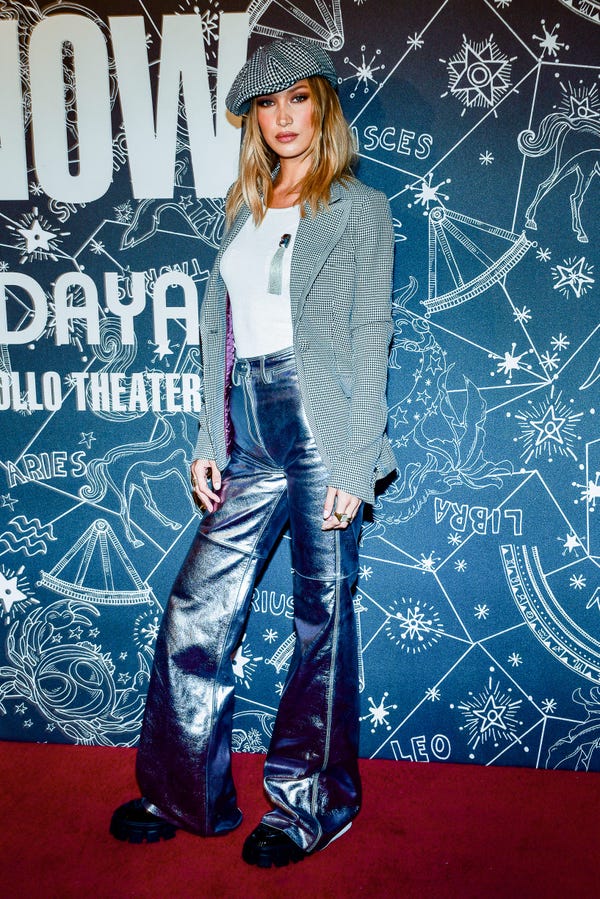 Hadid arrived at the 2019 Tommy Hilfiger and Zendaya runway show in an outfit from the designer, which included a houndstooth blazer and wide-legged metallic pants.

Hadid's entire look was reminiscent of another era. Embellished denim pieces were popular in the early 2000s, and the newsboy cap has made a recent comeback, with designers such as Coach reviving the accessory.

In January, Hadid wore a leather vest that gave the illusion of a halter top. 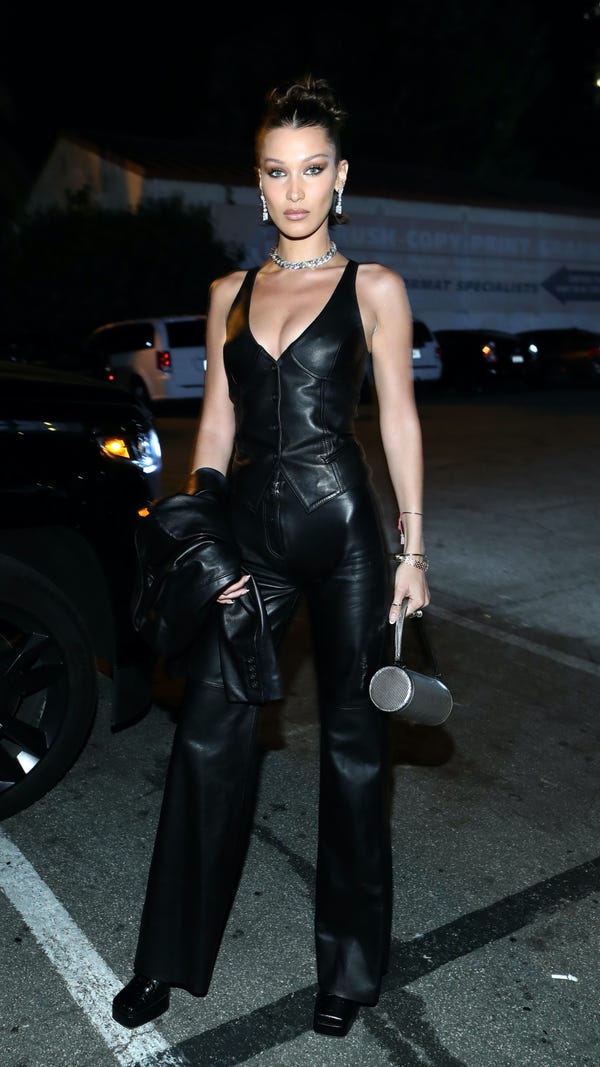 The model paired the top — part of Tommy Hilfiger's collection with Zendaya — with matching flare leather pants and a shoulder bag from Le Petits Joueurs.

Hadid's top may have been a nod to the halter neckline that was popular in the early 2000s, but her choice to wear leather-on-leather was also a nod to decades past. In 2019, stylists predicted that outfits with leather would continue to be an increasingly popular trend.

The supermodel attended the Louis Vuitton show at Paris Fashion Week in January wearing a 2000s-inspired outfit from the designer. 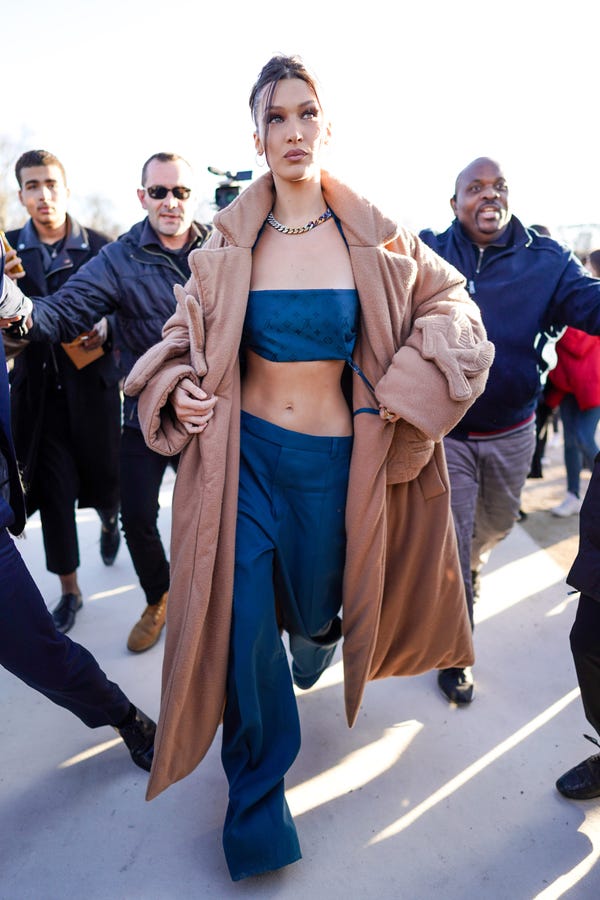 Hadid's outfit included two trends that were prevalent in the early 2000s and are starting to make a comeback: low-rise pants paired with crop tops.

During the early aughts, many celebrities were photographed in ensembles that looked similar to the Louis Vuitton matching set that Hadid wore in January. 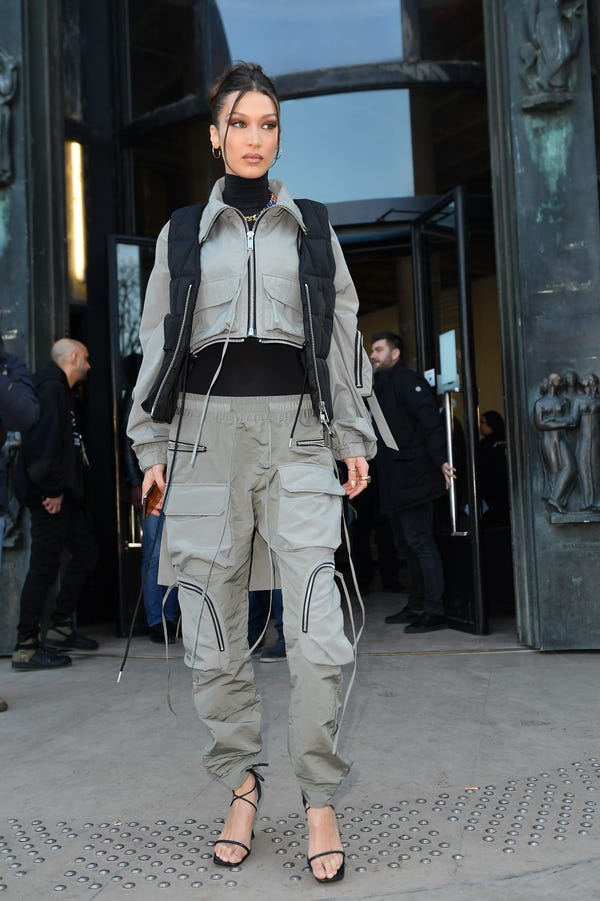 In recent years, celebrities and fashion influencers have revitalized the early 2000s trend of cargo pants — oftentimes with several pockets, zippers, and strings. 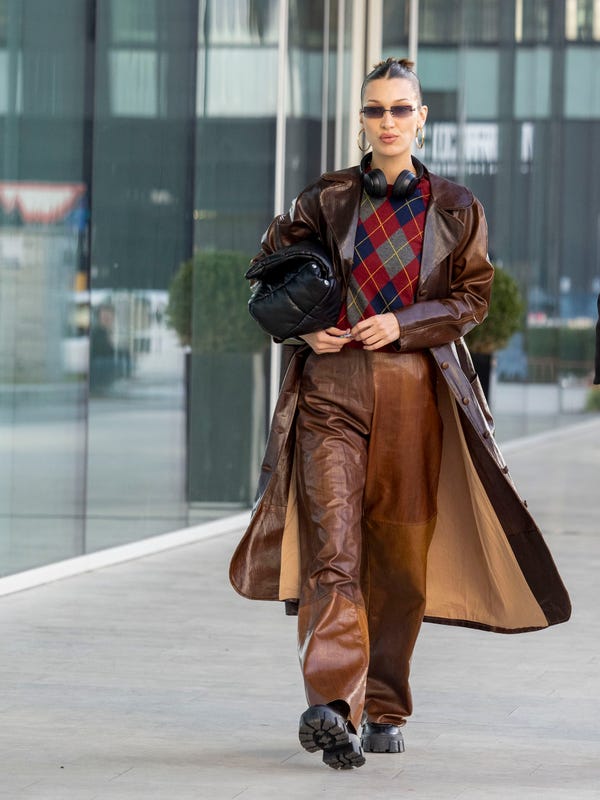 The 2000s saw many styles of sunglasses, including colored lenses, bedazzled frames, and even tiny sunglasses. The latter started seeing a resurgence in 2017.

Hadid sported a pair of rimless, ombré square sunglasses during Milan Fashion Week in February. She wore them with an almost entirely leather outfit and an argyle sweater vest. 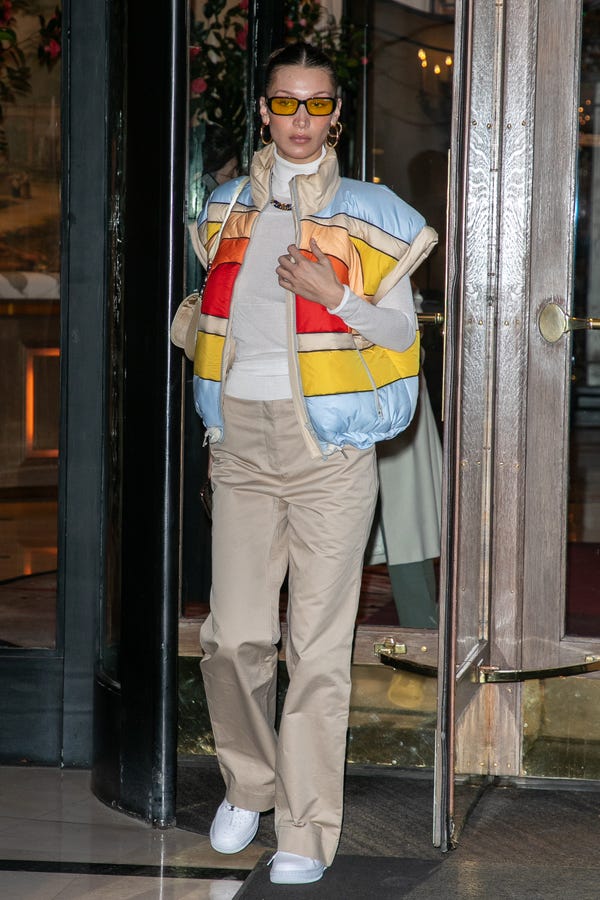 Puffer jackets and vests were all the rage in the early 2000s and have since made a comeback with the rise of athleisure.

Hadid sported a furry bucket hat, which she paired with an oversized leather jacket and pinstriped pants. 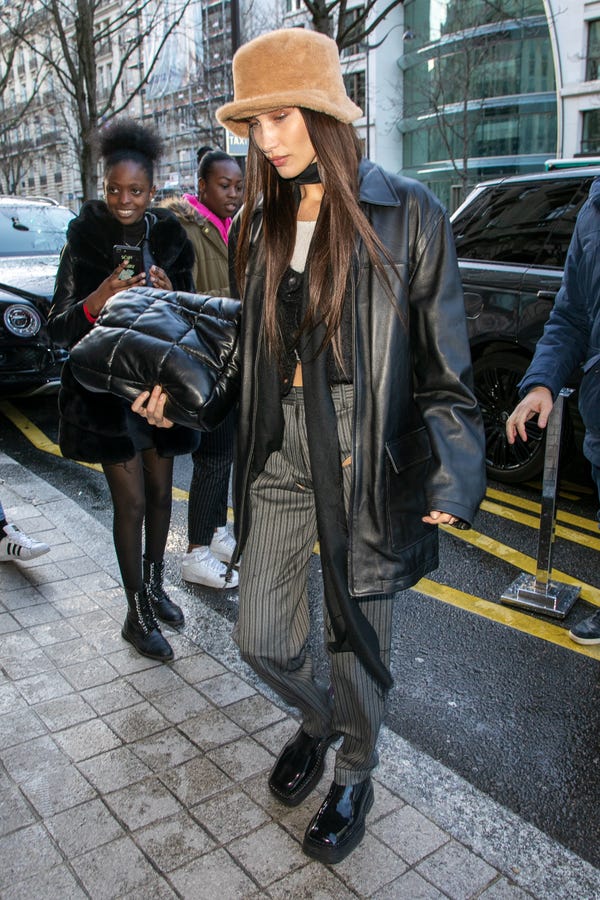 At the time of writing, the Ruslan Baginskiy faux fur bucket hat that Hadid wore in February was on sale for $292.

She accessorized the look with an oversized Stand Studio padded faux leather clutch that was available to purchase for $3oo at the time of writing in pink and white.

Bucket hats first started rising in popularity in the '80s and then again in the early 2000s. In 2015, one of Rihanna's close friends Melissa Forde released M$ X WT, a bucket-hat line for Opening Ceremony. Since then, the trend has continued to be a favorite among celebrities. 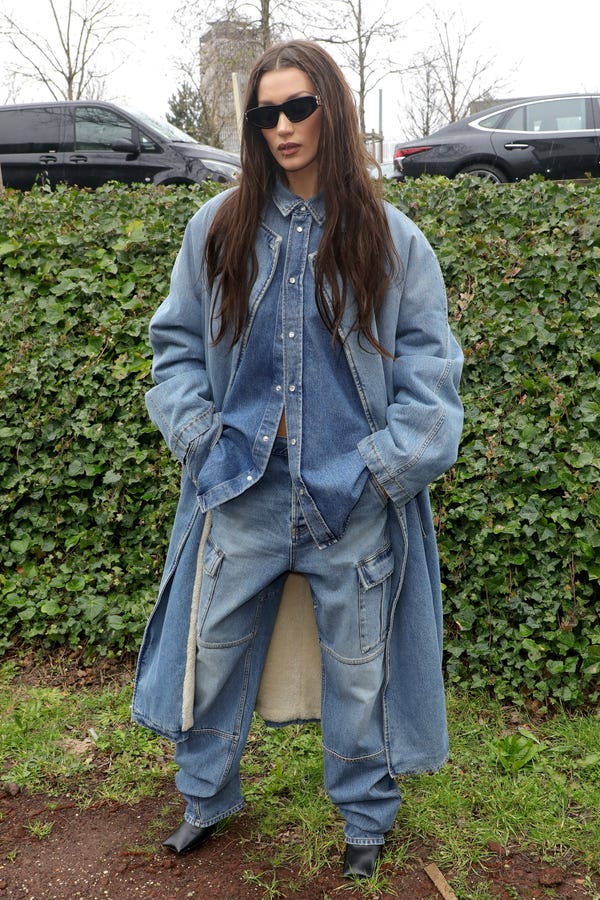 Hadid's look at the Balenciaga Paris Fashion Week show may have been an homage to Britney Spears' and Justin Timberlake's iconic 2001 American Music Awards fashion statement. At the awards show, Spears and Timberlake famously arrived on the red carpet wearing matching denim-on-denim outfits.

Instead of wearing a denim dress like Spears, Hadid wore baggy jeans, an unbuttoned shirt with a tan crop top underneath, and a $2,550 Balenciaga denim trench coat that was sold out at the time of writing. She paired it with $1,190 Balenciaga booties and black sunglasses.

In March, the supermodel embraced the visible thong trend while out in New York City. 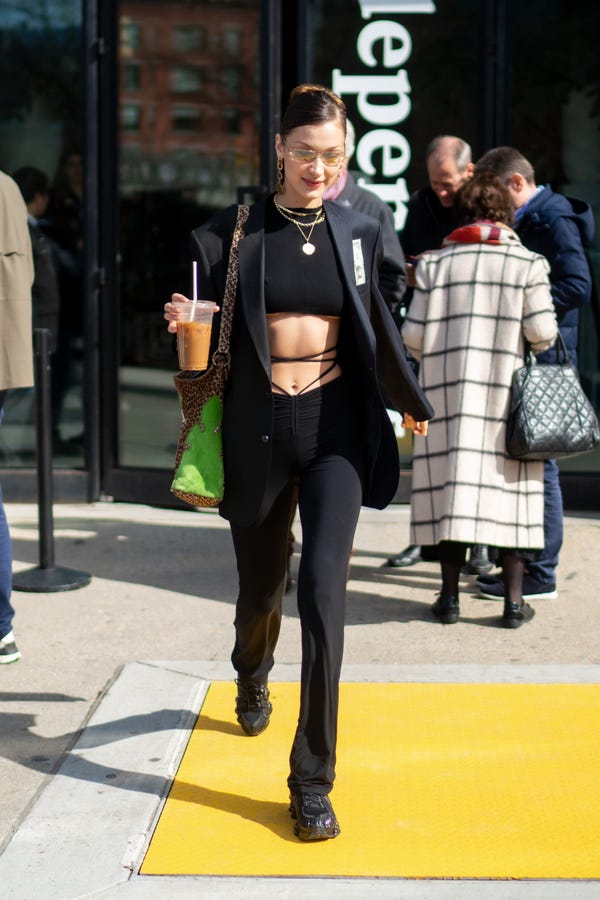 Hadid wore $70 I.AM.GIA pants designed with self-tie fabric straps, which she wore wrapped around her waist to create the illusion of an exposed thong. The model paired the pants with a black crop top, a Chrome Hearts leopard bag, and $170 Nike sneakers.

The visible thong trend was popular in the early 2000s, and celebrities started wearing it again in 2018. Two years later, it doesn't seem to be going away anytime soon.

Hadid was photographed in July wearing thong kitten heels, a style reminiscent of the late '90s and early 2000s. 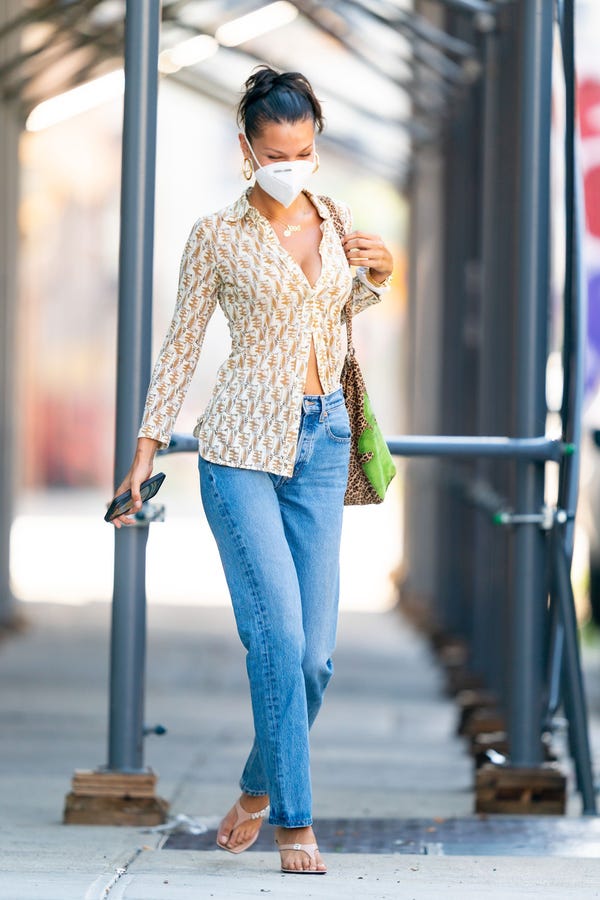 Thong sandals like Hadid's were popular in the '90s and early 2000s and made a comeback around 2019 when celebrities like Rihanna, Kim Kardashian West, and Emily Ratajkowski started wearing heeled flip flops.

Recently, designers have embraced the shoe, adding their own twist with platforms, kitten heels, and flat styles.

The model wore a pair of paisley jeans while in New York City in July. 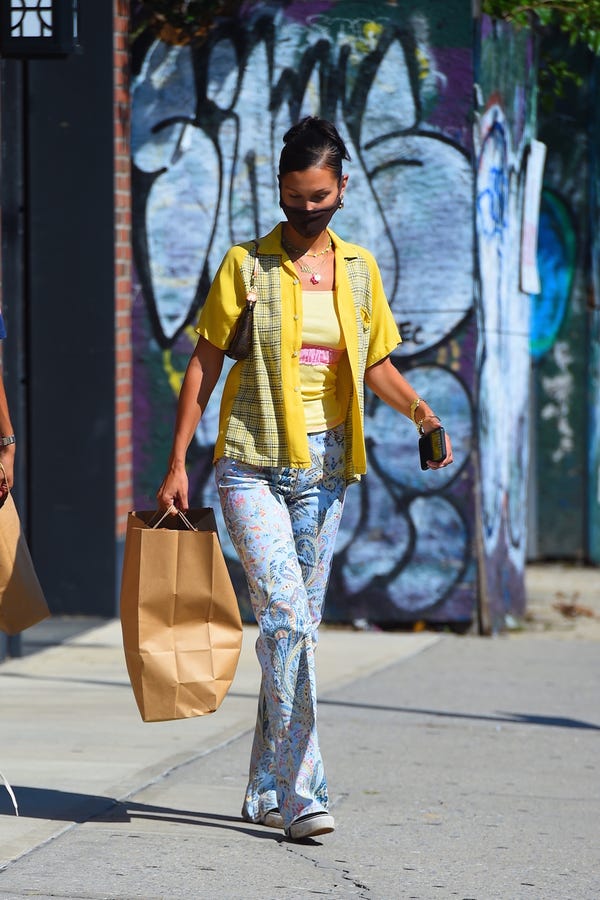 Not long after Etro released their paisley jeans earlier this year, celebrities like Hadid seemed to embrace the nostalgic style.

In July, the supermodel was photographed wearing the $620 pants, a yellow camisole, button-down shirt, a Louis Vuitton handbag, and $60 Vans Old Skool sneakers.

Paisley jeans are slowly making a comeback, according to InStyle. The pattern, which may conjure memories of childhood, can easily be paired with different colors.

In September, Hadid was photographed wearing a bright tropical-print top, white jeans, sneakers, a jacket, and a small shoulder bag. 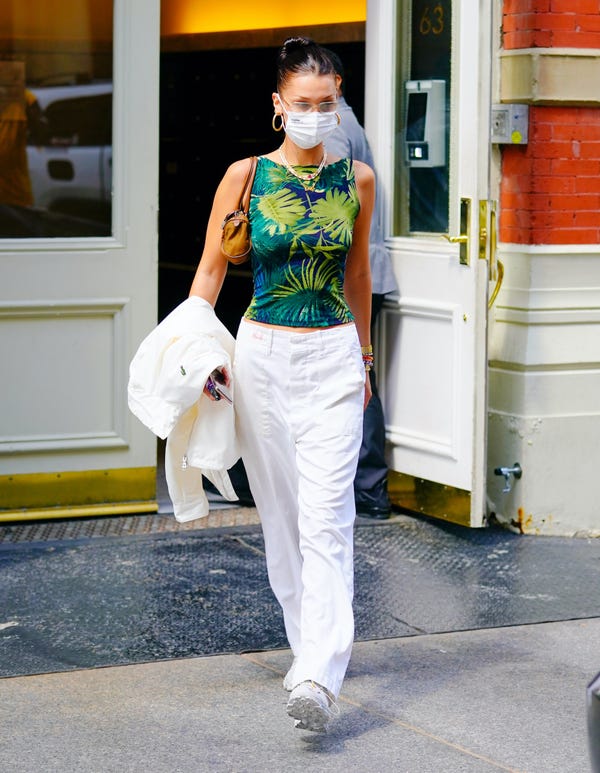 2019 was the year of the micro handbags, but in 2020, the popularity of the small shoulder bags started rising. The trend gained notoriety again after designers like Fendi reissued its baguette and Prada brought back its $775 nylon mini bag. Celebrities embraced it and are back to wearing shoulder bags regularly.

Hadid was photographed wearing a camel-colored one that served as a nice color block for the rest of her outfit.

Hadid was photographed in September wearing a vintage sweater and platform sneakers. 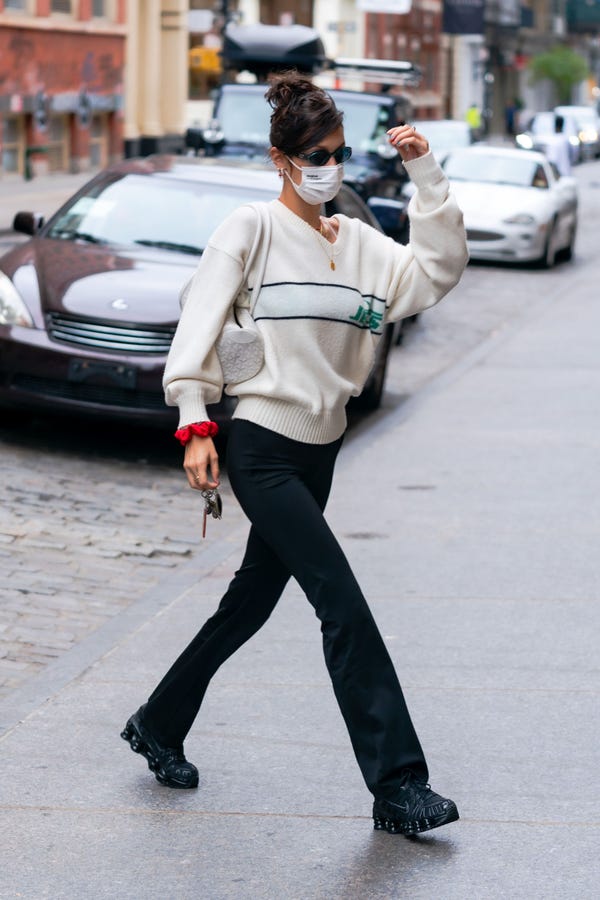 In September, Hadid wore a Goyard shoulder bag — a silhouette that was popular in the early 2000s — and platform Nike sneakers.

Shoes with chunky soles, similar to the ones Hadid wore, were seen on several high-fashion runways this year, including in Prada's Spring 2020 ready-to-wear collection, and in Miu Miu's ready-to-wear line from the same season. 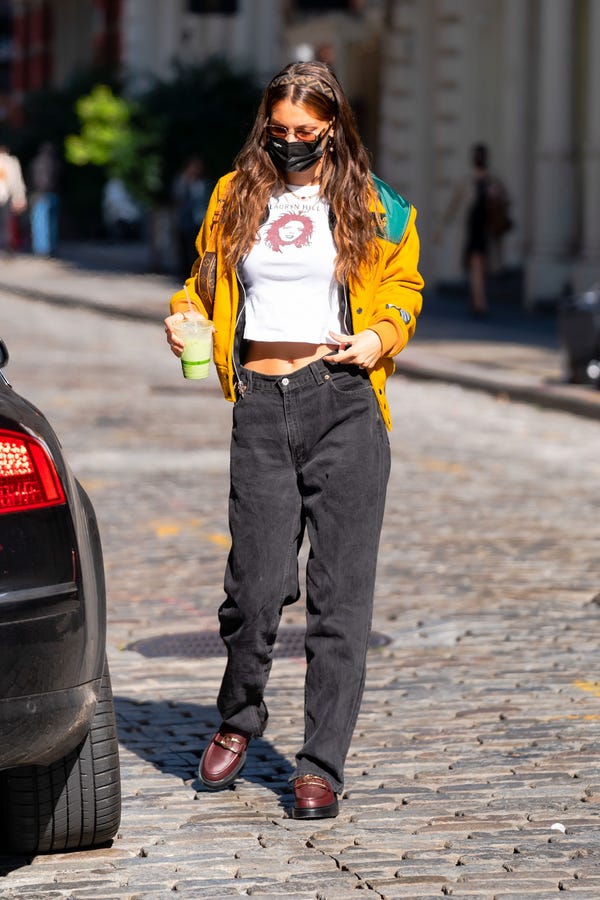 Cropped graphic T-shirts, like Hadid's — which has an illustration of singer Lauryn Hill — were a signature silhouette in the late '90s and early 2000s and were often worn with low-rise jeans.

Hadid paired the trend with baggy jeans and platform loafers, which are another example of a chunky shoe silhouette that's becoming popular again.