Alan Titchmarsh explains how to prune an Acer tree

Few plants have the fabulous foliage, elegant form and all year appeal possessed by the Japanese maples. Beautiful silhouettes in winter, vibrant new leaves in spring, billowing summer canopies and flaming autumn tints. Often thought of as delicate and difficult they are in fact easy to grow and far more robust than many believe. Most Japanese maple trees are sold in pots which can be used for five years or so before the tree needs to be repotted. But what time of year and how should gardeners go about repotting their acer trees?

Gardening expert Miles from Miles Japanese Maples, a small family-run nursery based in West Sussex specialising in young Japanese Maples that are sown, grafted and grown in the UK, said: “The best time by far to re-pot a Japanese maple is early spring, just before the buds begin to burst into life. The reason for this is that the days are starting to increase in length and the temperatures (hopefully) are beginning to rise, meaning that your Japanese maple is beginning to wake up from its winter slumbers.

“The roots generally begin to grow before the leaf buds and so, re-potting now means that the plant will start to root out into its new compost more quickly than at other times of year. We wouldn’t advise re-potting in April/May – this can be more stressful for your Japanese maple as it is putting all of its efforts into producing new foliage and the shock of being transplanted at the same time can result in the spoiling of the leaves.

“This can be seen by black or brown tips to the leaves but isn’t necessarily anything to worry about, it just looks unsightly. This doesn’t happen on all Japanese maples but it is worth bearing in mind.”

The acer expert noted that gardeners can re-pot through the summer months as Japanese maples will have done a lot of its growth by then and will happily root into fresher compost. However, if gardeners re-pot in the very height of summer when temperatures can be at their most extreme, they may find that the foliage shows signs of stress as it struggles to move enough moisture from the roots to the leaves. 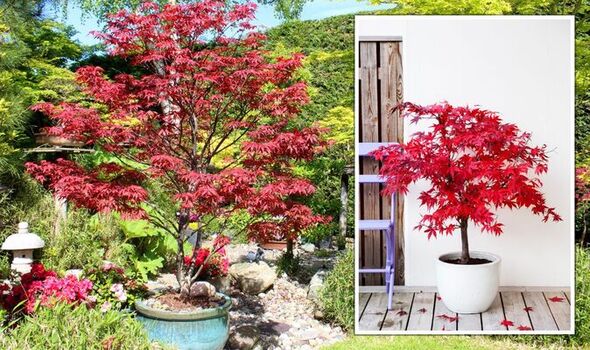 Miles warned against repotting these stunning trees in autumn. He said: “Definitely don’t re-pot in the autumn. As the day length decreases and the temperatures begin to fall, your Japanese maple is getting ready to go into hibernation.

“This means that although it may start to produce some new roots into the fresh compost you’ve given it, it more than likely won’t fully root into its new container. This means trouble. If it hasn’t rooted properly before the onset of winter (particularly considering our wet winters).”

When it comes to potting these trees, the acer pro highlighted “one of the biggest killers” of this plant. He said: “A golden rule for growing Japanese maples is to never over-pot.

“One of the biggest killers of Japanese Maples is over-potting. Don’t be tempted to transplant your tree from its container into something that is much larger, thinking that it will save you time in the long run, when it can actually cause damage.

“Japanese maples like to be re-potted in stages, going up in size a little at a time – somewhere between 50 to 100 percent wider than its current container. For example, a young Japanese maple growing in a pot that is 15cm (six inches) wide should be transplanted into a pot between 22.5cm (nine inches) and 30cm wide (12 inches).

“For slower-growing forms and dwarf types, it would be best to err on the smaller jump in size as they can take longer to get settled.”

In terms of the pots used for growing these trees, Miles noted that glazed pots would be his “go-to choice” when growing a Japanese Maple for the long term.

He explained: “Terracotta pots are porous and as such tend to dry out too quickly in the summer months which will result in a stressed tree – but absolutely fine for plants more used to Mediterranean climes such as olive or fig trees. 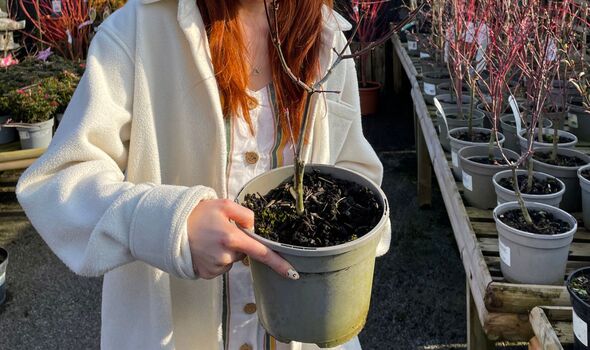 “Definitely avoid metal containers – they might look funky but in the summer, they get far too hot and can seriously damage the root system.

“As for pot shape, try to steer away from pots that curve in at the neck as this will cause real problems when re-potting in the future as you may not be able to get the tree out without damaging the pot or the tree or both.

“For the weeping forms of Japanese Maple you may wish to opt for a taller pot so the branches can cascade over the edges but I would avoid a tall pot for a tall tree as they can be more unstable in windy weather.”

Be sure to place the pot on pot feet that raise it slightly off the ground – this will help to ensure that excess water is free to drain away from the pot as well as help to avoid frost damage to the pot in the winter months. 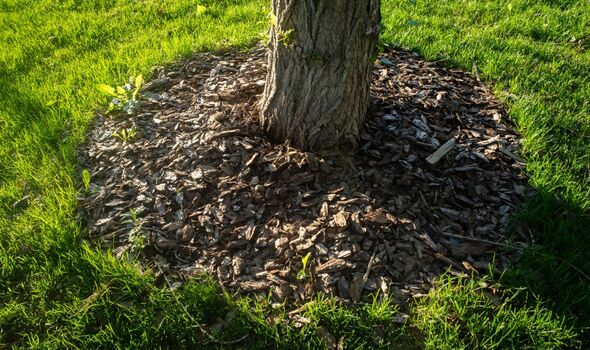 When it comes to the type of compost to use for acer trees, they like a free-draining compost that retains some moisture and has a good balance of air and moisture.

Miles explained: “We use a mixture of good quality peat-free ericaceous compost (it’s not vital but we find you tend to get better colours in the leaves) mixed 50:50 with fine pine bark and some slow release fertiliser.

“The fine bark serves two purposes. Firstly, it creates air gaps within the compost to allow the movement of air around the roots and ensures that they don’t become waterlogged, as can often be the case in denser compost mixes.

“Secondly, the nature of bark means that it can also absorb and retain moisture that can be accessed by the roots, meaning the compost can be free-draining (excess water can drain through) but moisture retentive (doesn’t dry out too quickly.”