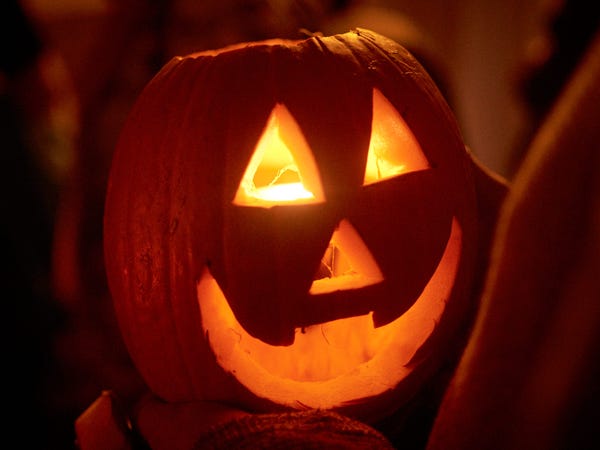 A more environmentally friendly way to celebrate Halloween might involve avoiding disposable plastic decorations and opting for Fair Trade-certified treats, but another way to make your Halloween more sustainable is keeping your jack-o'-lantern out of the trash.

Lauren Olsen, a sustainability expert with World Centric, told Insider that an estimated 2 billion pounds of pumpkins are grown in the US every year, and most of them are thrown out. This can prove disastrous for the environment by contributing to climate change, she said.

"Food waste in a landfill creates methane," she said. "Methane is a very powerful greenhouse gas, about 25 times more potent than carbon dioxide in terms of creating the greenhouse effect. It's very important that food waste, as much as possible, is kept out of landfills."

To reduce the amount of food waste that results from jack-o'-lanterns, use the pumpkin scraps in tasty ways instead

"Something you can do when you're carving it is baking the seeds rather than just throwing them out," Olsen said. "They can be nutritious and tasty, especially fresh out of the oven."

Pumpkin shavings can also be baked and turned into pumpkin puree for pies or other baked goods, and the skin can crisp up into crunchy pumpkin chips.

Once Halloween has come and gone, the jack-o'-lantern itself can be sustainably discarded through composting

"Compost piles are pretty easy to make," Olsen said. "It's usually one part green waste, which would be anything left over in the kitchen, like your pumpkin, and then three parts carbon, so that would be leaves and twigs and branches, so things that are mostly dead and dry."

If you live in a city or an area without a backyard, commercial composting is often available. If not, local farmers would certainly appreciate the donation.

"If you have a local farm that might have pigs or something like that who could benefit from the pumpkins, that's another option," she said. "But really, finding ways to avoid putting it in the landfills is the big takeaway."