Aside from Hogwarts or the Krusty Krab, one fictitious destination I’ve always dreamed of visiting is Central Perk. The famous Friends coffee shop doesn’t actually exist in downtown New York City (which was a genuine let-down upon moving here), but one Los Angeles coffee chain is replicating the ’90s sitcom hangout, so it goes without saying I’m dying to go. Seriously, if you’re living on the West Coast, make sure to stop by The Coffee Bean & Tea Leaf’s LA Friends Pop-Up. You’ll be living out all of my wildest dreams.

On Tuesday, Aug. 13, one Los Angeles, California-based coffee chain, The Coffee Bean & Tea Leaf officially announced that they would be launching a limited-time Friends pop-up. It’s set to run in two of the beverage chain’s Los Angeles locations, and according to the press release, it will closely duplicate the famous stomping ground of Joey, Rachel, Ross, Monica, Phoebe, and Chandler, in honor of the show’s 25th anniversary. Could I be any more excited?

And whether you’re interested in going and belting your best "Smelly Cat," or if you’re simply looking to meet other like-minded fans, the highly-anticipated Friends pop-up will be running at The Coffee Bean & Tea Leaf’s 1312 3rd Street Promenade location in Santa Monica, as well as the 8793 Beverly Boulevard location in West Hollywood, according to the press release. Sadly, it will be running for one week only, from Friday, Aug. 16 to Friday, Aug. 23, so you’ll want to get there as soon as you possibly can. But for now, that’s totally moo point.

The Coffee Bean & Tea Leaf’s Central Perk Café will feature seriously ‘gram-worthy photo installations, according to the press release, such as a photo booth that will allow you to take pics with Friends memorabilia, as well as a section where you can sit on the orange couch and take adorable BFF pics. Like the classic café, you’ll also be able to grab some drinks, and if you’re lucky, there might be a musical performance by the one and only Phoebe Buffay. 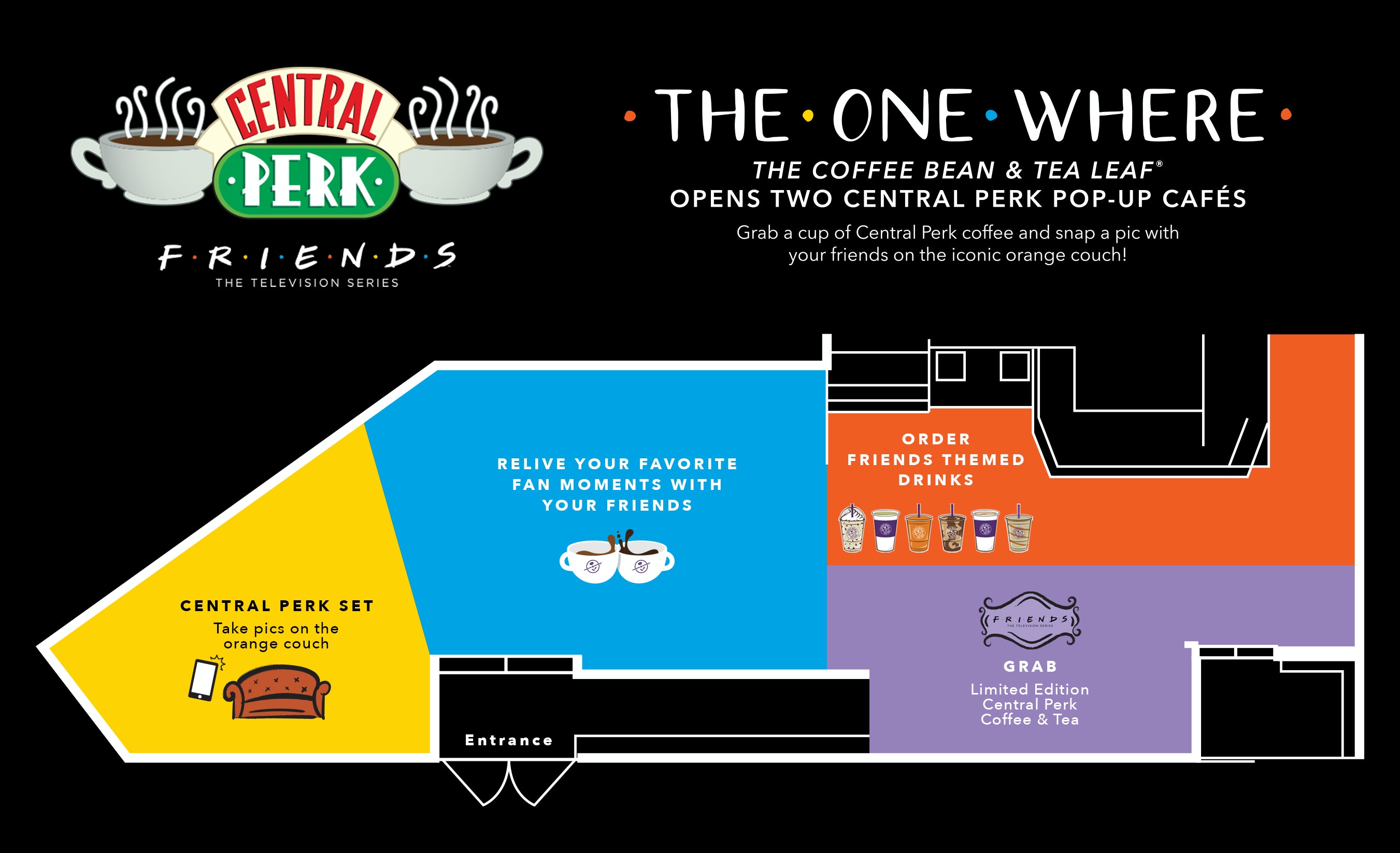 And you definitely won’t want to forgo ordering a themed drink. The chain has crafted a menu of Friends-inspired sips, according to the press release, which include: The Rachel Matcha Latte, The Joey Mango Cold Brew Tea, The Chandler Caramel Coconut Latte, The Ross Classic Flat White, The Monica Midnight Mocha Cold Brew, and The Phoebe Cookies and Cream Ice Blended. I’ll take one of each.

As you would probably expect, each specialty drink will be served in a limited-edition Central Perk coffee mug or to-go cup, according to the press release. Fingers crossed that Gunther will be taking my order behind the counter — he’s an integral part of the experience, you know. 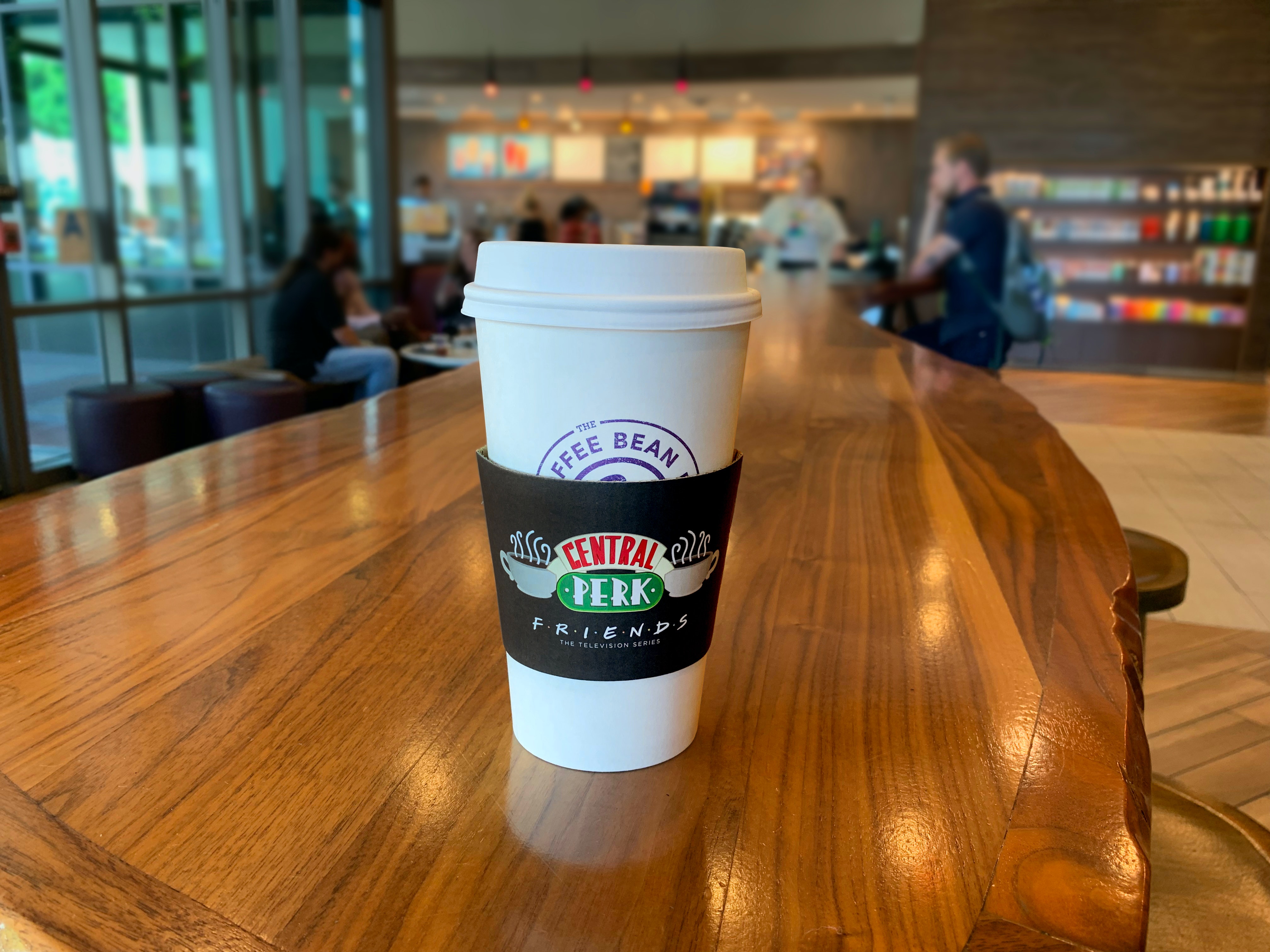 In the press release, Darrin Kellaris, The Coffee Bean & Tea Leaf’s Vice President of Marketing said so many employees of the chain, as well as fans, are avid Friends enthusiasts. The company strives to make the café feel like home (or like the Central Perk Café), so he hopes customers feel a connection to the series whenever they go.

According to the press release, Kellaris said:

Whether you’re aren’t quite over Ross and Rachel or if you’re still on the hunt for your lobster, The Coffee Bean & Tea Leaf’s Friends-inspired café will seriously make you feel like you’re one of the gang. And I don’t know about you, but I have my eye on The Joey Mango Cold Brew Tea. Mango? Good. Cold Brew Tea? Good. Friends pop-up? I’m so in.