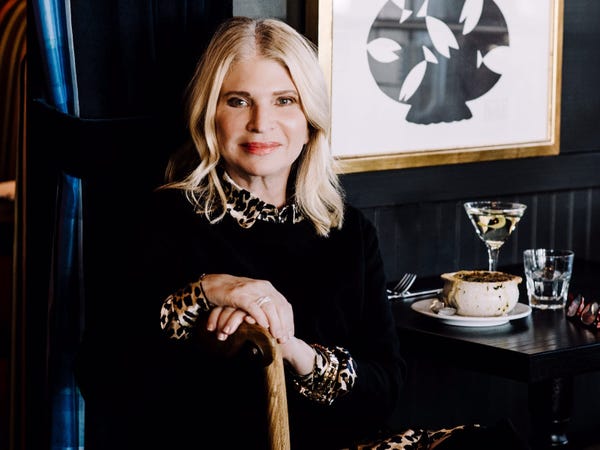 According to restaurateur Martha Hoover, the idea of failure never occurred to her. "I truly believed I had equal opportunity, and no one could tell me otherwise," Hoover told Insider. "So I never went into anything that I did thinking it would not be successful."

That attitude propelled the 66-year-old, who had never worked in a kitchen before, to quit her career as a sex crimes prosecutor to open Café Patachou in Indianapolis in 1989. At the time, processed food and chain restaurants reigned supreme, and female bosses were still a rarity.

"'I didn't want to waste your husband's money,'" she recalled her kitchen designer telling her when she asked why he didn't install a dishwasher in her new kitchen. He was convinced that a breakfast and lunch joint featuring only local ingredients — and headed up by a woman — was bound to fail, she said.

But Hoover remained undeterred, crediting her perseverance to growing up in the 1970s, during the second wave of feminism.

Today, she oversees an empire of 12 restaurants.

She fell in love with food and cooking at age 17, on a trip to France she funded with her saved babysitting money

Hoover had loved food since she was a teenager. However, her dad, a physician, urged her to consider a more traditional education. So she put her culinary hopes on hold and went to law school at Indiana University, eventually working as a prosecutor in one of the nation's first sex crimes units.

"The real question is why I went to law school, why I became a prosecutor, because that was always a secondary choice for me," she said.

When she took a break to be a stay-at-home mom after having her second child, that original dream of opening a restaurant came bubbling back to the surface. Unknowingly pregnant with her third child at the time, she finally decided to make it happen.

Today, over three decades later, she's been named "Empire Builder of the Year" by Eater, one of the "Most Innovative Women in Food & Drink" by Fortune, and is a four-time James Beard Award semifinalist.

Hoover is known for her unusual leadership style

Today, you'd be hard-pressed to find a menu that doesn't feature the words seasonal or locally sourced. But Hoover and Café Patachou introduced Indianapolis to farm-to-table dining, then a little-known concept. They also introduced the idea of the female restaurateur.

She believes her lack of experience turned out to be her biggest strength.

"Because I made no assumptions and had no preconceived notions as to what a restaurant should be, I created a restaurant that was not templated on anything that had been done," she said. "It liberated me from a lot of toxic practices that I didn't even know existed because I had no experience in that industry."

Hoover's 400 employees get full benefits and parental leave. They also have access to a financial literacy workshop as well as an employee-run emergency relief fund, which provided them with $120,000 during the coronavirus pandemic.

She describes her business as "a big circle" instead of the traditional hierarchical pyramid. She likes hearing from everyone in the company, not just those few at the top.

This approach, she said, has resulted in an exceptionally flexible and adaptable company — a huge plus during a global pandemic.

In fact, Hoover opened a burger-focused carry-out restaurant called Apocalypse Burger within weeks of her other restaurants closing in March, and says she's confident it will last beyond the pandemic.

According to Hoover, she's always been focused on building a rock-solid internal culture. She says it makes her "radically different" from the rest of the industry, which has become known in recent years for its tyrannical hierarchies, toxic egos, and rampant sexual harassment.

"I didn't know what I was doing was so unique to the industry. People wanted to make it sound like [our success] was accidental — there was nothing accidental about the success of Patachou," she added. "Everything we did was remarkably intentional with truly thinking about the future of the company, the future of our community, and the future for the people who worked for the company," she said, noting that some of her employees have been with her for over 25 years.

She puts her community first — both the people and the environment

Hoover said sustainability has always been critical to her company. Even with no experience running a restaurant, she understood that "there's nothing positive to supporting a system that creates waste."

She employs a director of sustainability, and has implemented a range of environmental initiatives, some as simple as composting.

"We are very committed to the community. Most restaurants are, but we decided to really go deep in our commitment," she said, calling it a "foundational value."

She founded the Patachou Foundation in 2013 to address childhood hunger and food accessibility issues in Indianapolis. The foundation also works with public schools to offer a fellowship program that provides paid internships and school credit, as well as hands-on training and industry-recognized certifications that allow kids to get jobs that pay above minimum wage once they graduate.

While the foundation served around 1,000 meals a week to food insecure children pre-pandemic, it's churned out almost 4,000 a week since.

Hoover believes that the pandemic has exposed how vulnerable the restaurant industry is, and hopes people will rethink how they value food post-pandemic

"What we're trying to do as a company is to change the value dynamic so that we no longer define happiness or success by convenience and consumption," she said.

Her hope for the future is that people redefine food value.

"Right now, the vast majority of people in America would define food value as the most food for the cheapest amount of money, but there are some true hidden costs to that paradigm," she said, explaining that restaurants are so thinly profitable that they struggle to pay their staff appropriately.

"I wish people would shop their value more than they shop for their convenience," she said. "If you truly support local, shop local. If you truly support businesses that treat their employees well, support those businesses. If the culture of bro chefs offends you, stop supporting bro chefs. You have to make some real changes in your own life that reflect the values you say you're aligned with. I think what people really need to do is put in the work."