In today's Instagram age, celebrating your baby's first year with a monthly photo shoot has become the norm, as frequent on our feeds as wedding hashtags and proposal videos.

But Lindsay Morrison knew she wanted something different from the usual stuffed animals and letter boards when it came to her newborn son Graham. She wanted burgers. Specifically, Shake Shack burgers.

Those who know the pastry chef well weren't exactly surprised. She also had a burger-themed pregnancy announcement and baby shower. Graham even has a cute burger-inspired nickname.

Morrison told Insider when her love of burgers first began, how many Shake Shack burgers she had to buy, and what she'll do if Graham grows up to be a vegetarian.

Morrison, 31, didn't have her first real hamburger until she was 27. 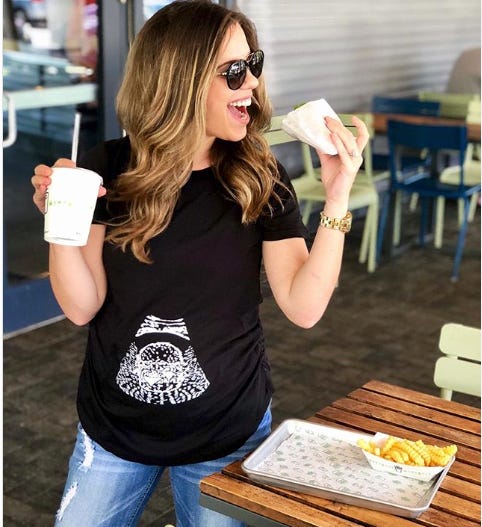 Morrison had a major sweet tooth growing up, always picking sugary over savory.

"I'm not kidding, my meals would be brownies and cucumbers," she told Insider. "I never liked wasting calories on things like burgers because I was eating so much dessert."

That dedication sent Morrison to pastry school in New York, but it was there that she finally experienced sugar overload.

"I had just eaten so much sugar," she said. "I flipped a switch and discovered burgers."

Morrison had her first real burger at Salvation Burger in Manhattan (which closed in 2017), and loved it so much that she put a picture of it over her bed. 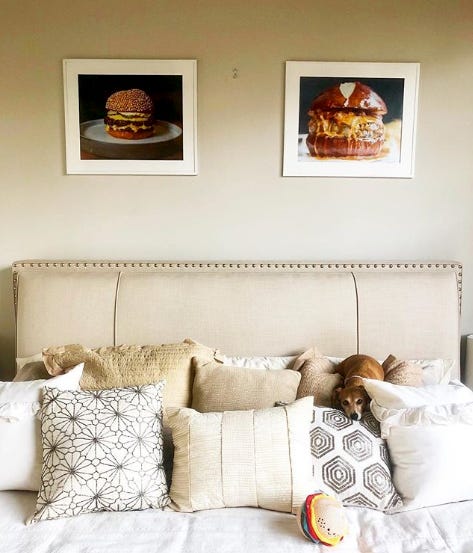 "I thought it was the best thing I'd ever eaten," she said. "It was so good, I miss it every day."

Morrison also hung up a photo of her husband Ben's favorite burger — from the New York restaurant Emily — over his side of the bed. A long-running family joke was born.

"It was a joke that grew so organically," she said. "I think it's so funny now, how it's evolved."

And before Graham was born, they were already getting him in on the joke. 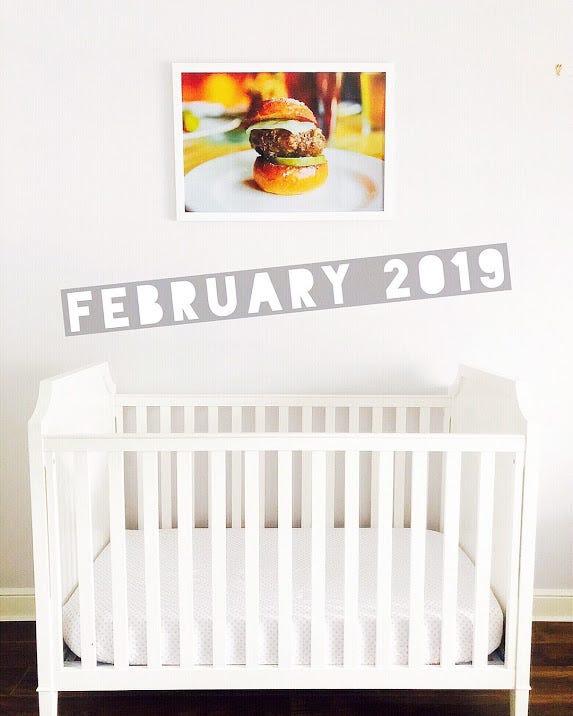 Morrison announced her pregnancy to her friends on Instagram by hanging up a picture of a small slider over Graham's crib to match the burger photos above her and Ben's bed. 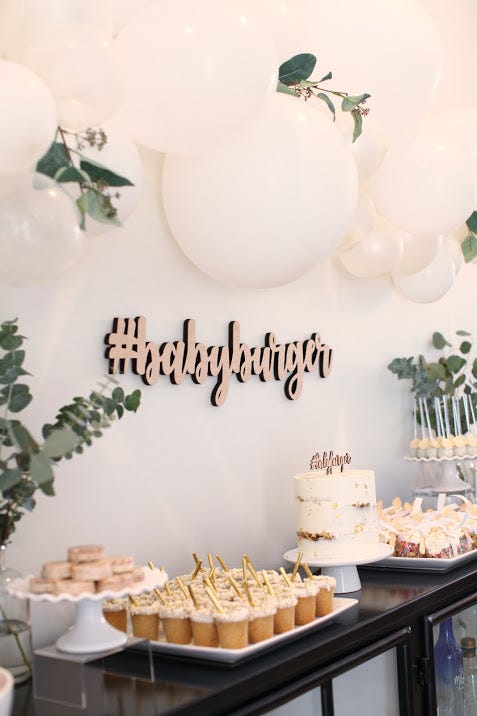 She even came up with a burger-themed nickname for her future son.

Morrison said she and Ben knew that if they had a daughter, they wanted to call her Emmy, which just happens to be the name of Emily's sister restaurant in Manhattan and Williamsburg (where Ben's favorite burger is also served).

The mom-to-be had always liked the name Graham for a boy, and she and Ben were delighted when they realized they could call their son "Graham-burger."

When it was time to take Graham's monthly baby photos after he was born in February 2019, Morrison knew she didn't want them to be cheesy. 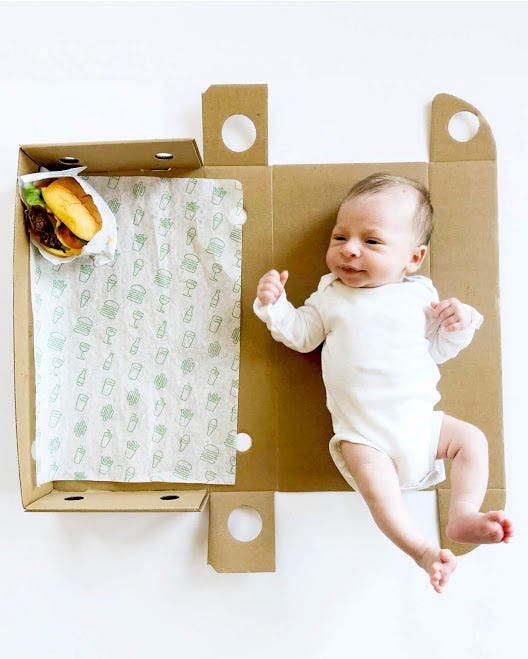 A week before Graham hit his 1-month milestone, Morrison knew exactly what she wanted to use for the photo shoot. Burgers, of course.

"I was like, 'We gotta do burgers, it has to happen,"' Morrison recalled.

Morrison got a large display board to lay everything down on, and asked Shake Shack for extra burger boxes and paper lining with its iconic green print of burgers, fries, and shakes.

At first, the shoots were just a small affair. 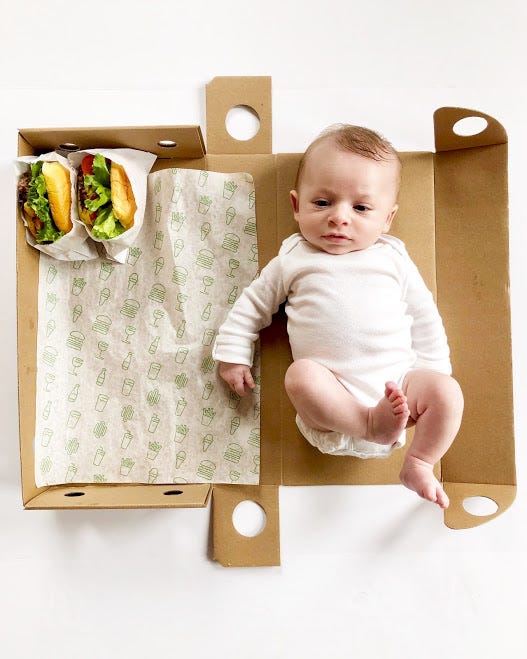 Morrison and her husband split the burger after Graham's first shoot, and each got a burger of their own when he turned 2 months old.

But as more of their relatives learned about the monthly shoots, they wanted to come over for burgers as well. 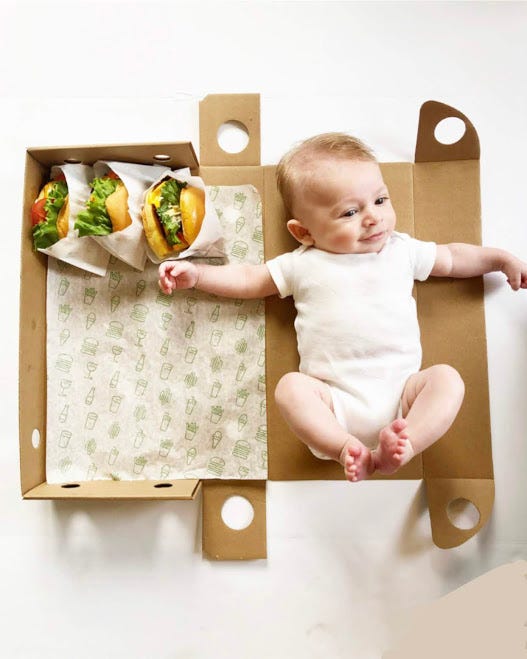 "After that everyone wanted to come over for burger day," Morrison said. "It was like a thing."

Morrison said her family was very supportive of the unique idea, and they often all got together at her parents' house every month for burgers and photos during Graham's first year. 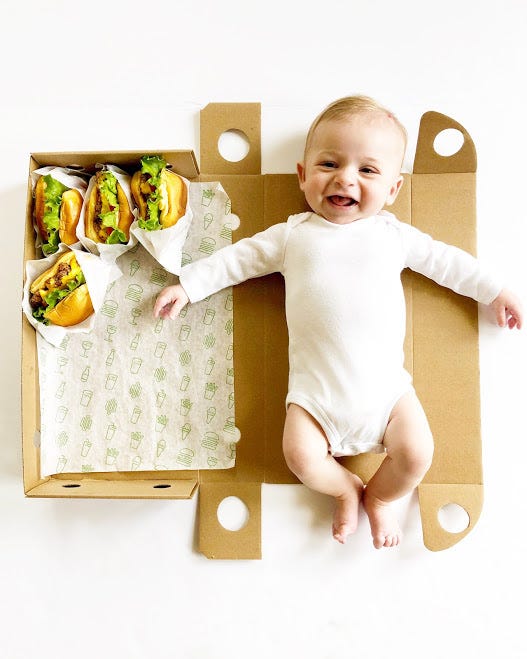 Morrison joked that each shoot was a "bit of a production," and always had to happen after Graham's morning nap.

Of course, as Graham grew, it became a little trickier to keep him still for the quick shoot. 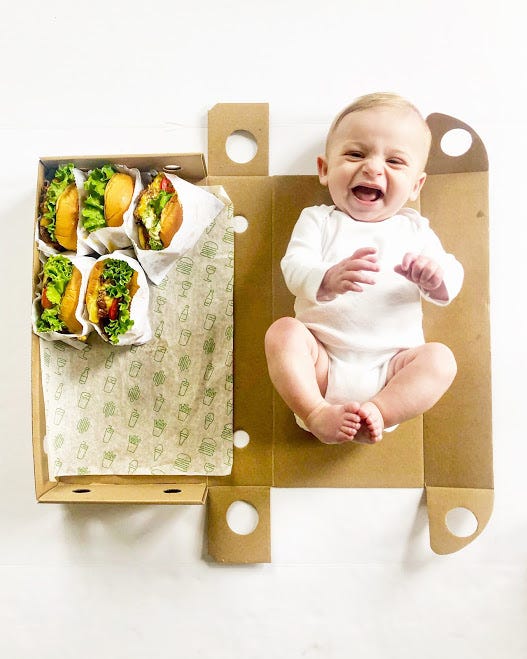 "When he started moving, it got crazy," she said. "The first thing he tried to do was roll on them, I think he just thought they were toys. And when he realized they were food, game on."

Even the ride back from Shake Shack could be nerve-wracking, especially as the number of burgers multiplied. 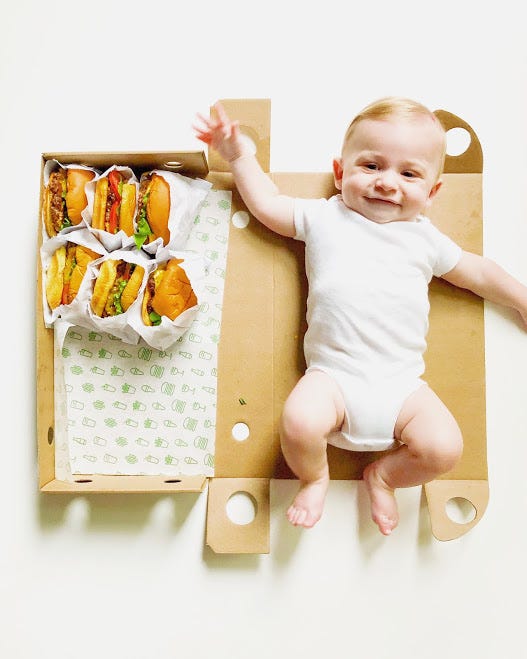 "It wasn't like we lived next door to a Shake Shack," Morrison said. "It was still being in the car with a baby and burgers for 10 minutes."

Morrison also found that making burgers look as good in the photos as they tasted in real life wasn't exactly easy. 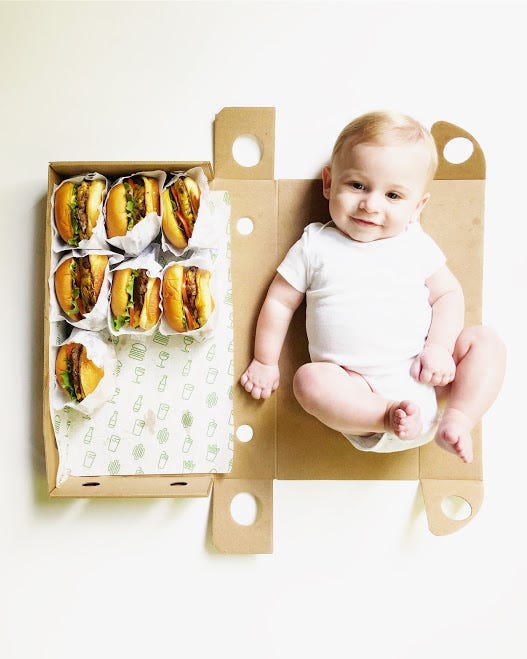 "I didn't want them to look greasy or get smooshed," she said.

Morrison and her husband would often tickle Graham to capture him laughing in the photos. 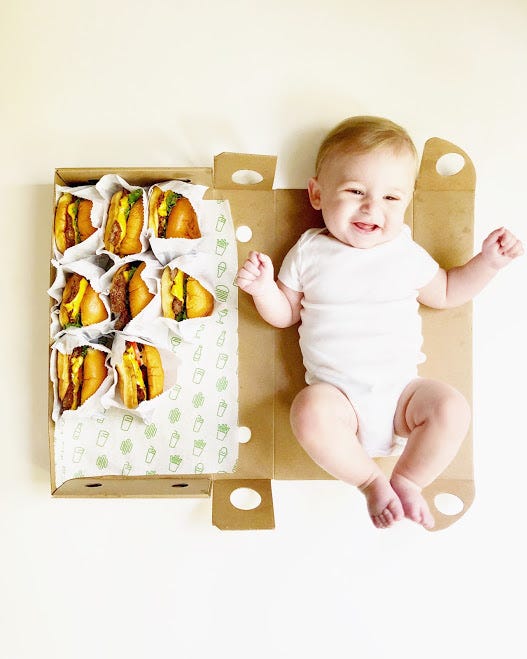 "I'd lay him down and hope he wouldn't grab the burgers," she said. "Half the time my husband's arm was in the photos, tickling him."

Oftentimes, not everything went smoothly, like when Morrison's dog ate one of the burgers right before she started taking photos. 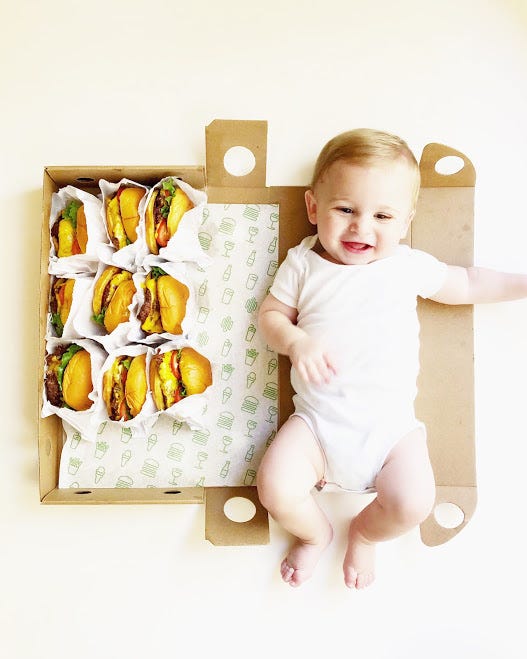 "There were just tomatoes on the floor, that's all that was left," she said. "I had to go back to Shake Shack with a 3-month-old baby."

But Morrison learned that sometimes the best pictures happened when everything didn't go according to plan. 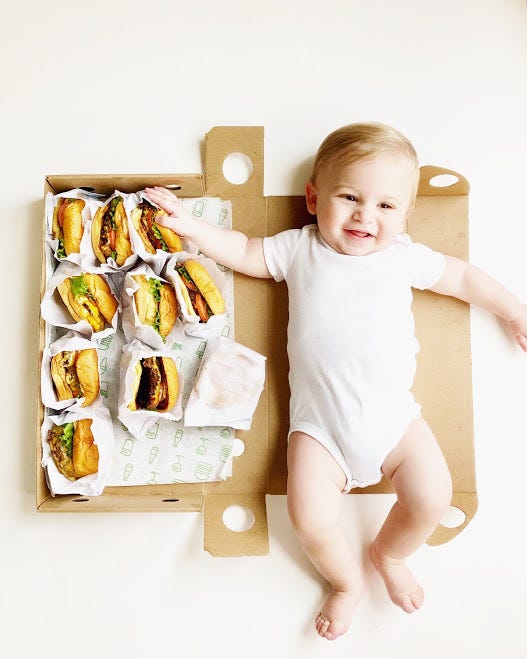 "I remember one of the months, I think it was the 10th one, Graham was pushing on the burgers," she said. "And I'm like, 'Oh my god, he's messed them up,' and then I was like, 'Wait, this is adorable that this is happening, I'm just gonna roll with it."'

Morrison kept up the burger shoot when her family moved from Florida to Atlanta, Georgia, even bringing along her board and the Shake Shack burger boxes. 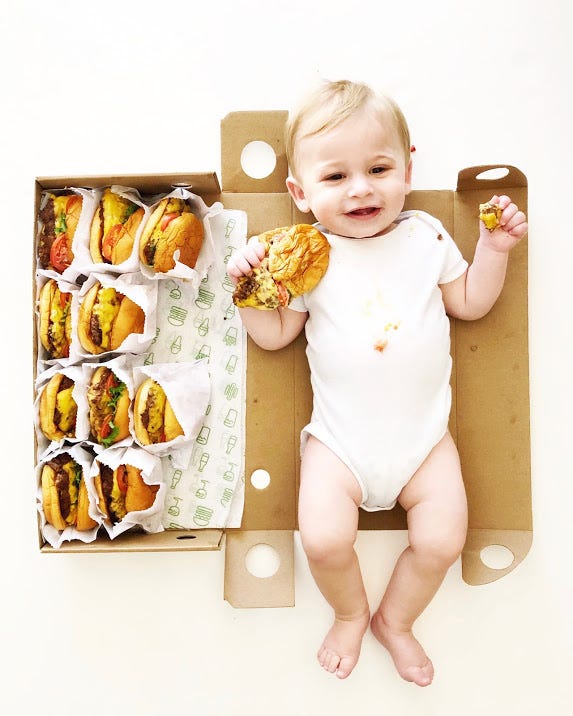 "Looking back, it was the most fun thing to do every month," she said.

By the time Graham hit his first year, the people at Shake Shack knew Morrison and her husband well. They had purchased 79 burgers in total. 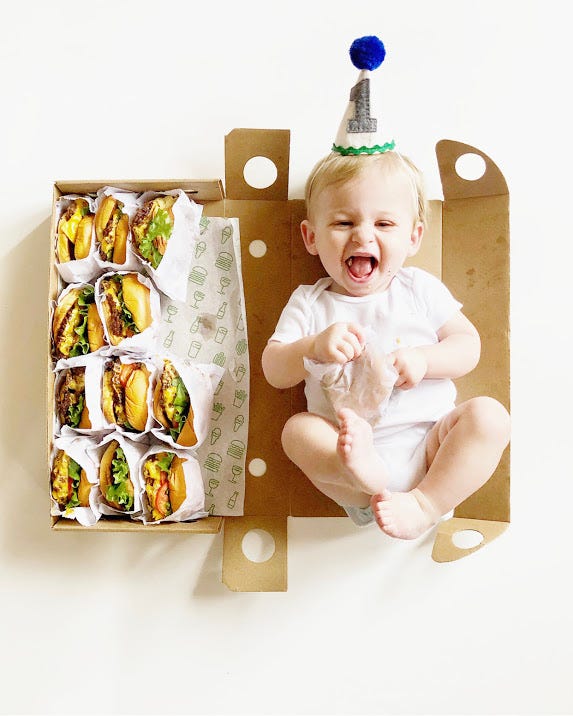 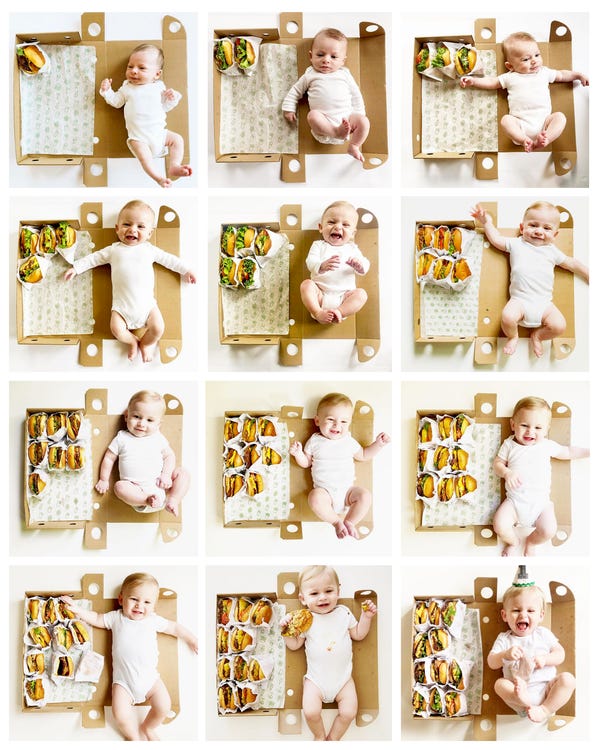 "I think they just thought that I was ridiculous," she said with a laugh. "And they thought it was funny."

"I think everyone was just excited to see it all together, especially because with the burger boxes, you can see the change in Graham's size. By the end, he almost didn't fit in the box."

And the burger photo shoot has also been a hit with Morrison's Instagram followers. 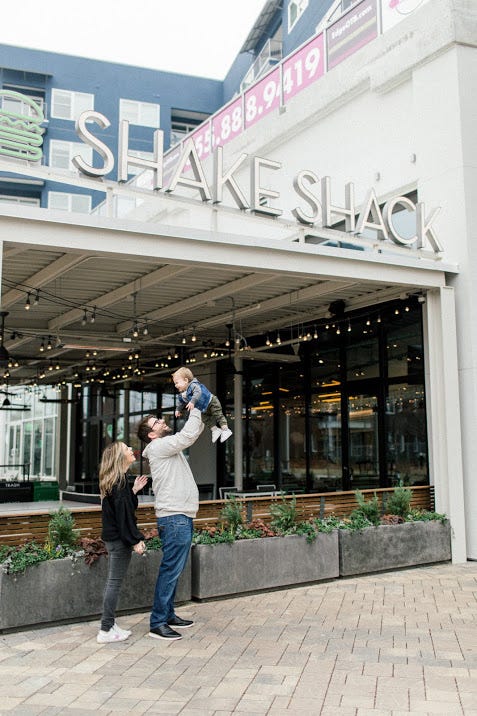 "Someone asked me what the goal with it was and I said, 'Fun,'" she added. "The world needs more fun."

When it was time for Graham's first birthday, Morrison decided that everyone needed a break from Shake Shack. But she still managed to incorporate a few special burger touches. 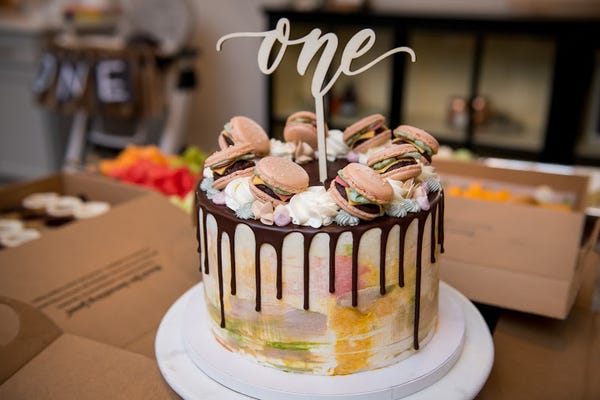 "I sent out a text message to everyone that said, 'We ate a lot of burgers this year, now it's time for dessert," Morrison said.

The pastry chef was able to put her skills to good use, creating cookie shots, brownies, and more. 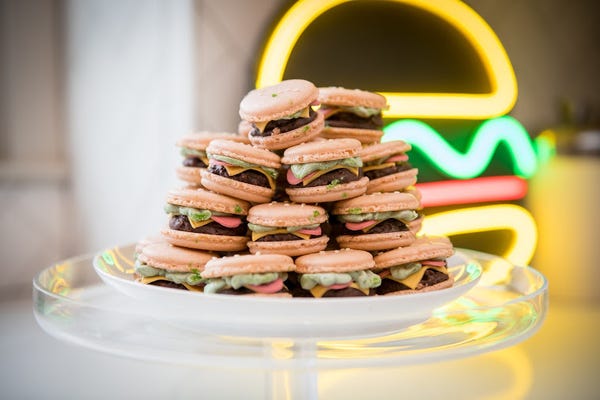 Morrison placed her desserts on Shake Shack paper liners, just as she had used in her photo shoots, and also had guests write notes to Graham in a copy of the Shake Shack cookbook.

She even made hamburger macarons.

One of Morrison's friends also made a special Shake Shack menu full of fun facts about Graham. 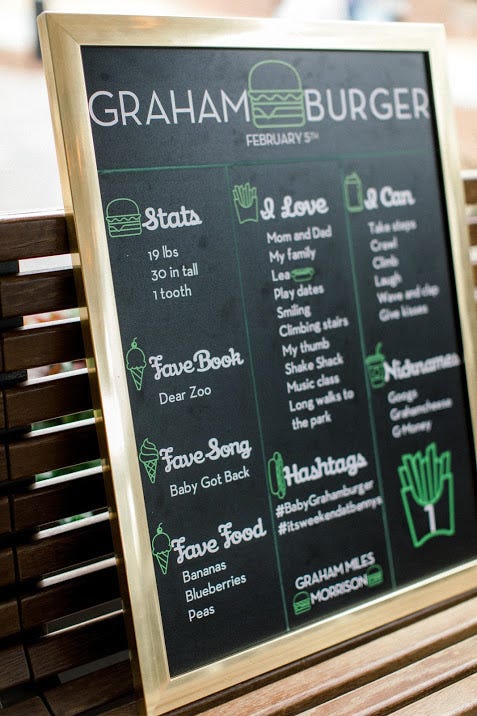 They included his favorite book, his favorite song, and the things he loved (Shake Shack made the list, of course). 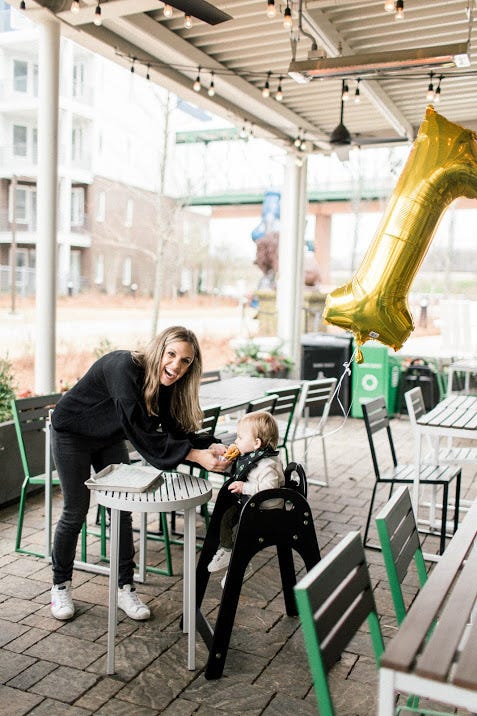 "Someone asked me if I was going to stop at 12 months and I said 'Absolutely,'" she recalled with a laugh.

But Morrison said she doesn't want the joke to end with her firstborn.

"Hopefully one day, if we have another baby, we'll have a small fry," she added.

Graham is already a big fan of burgers, but Morrison knows exactly what she would do if he grows up to be vegetarian. 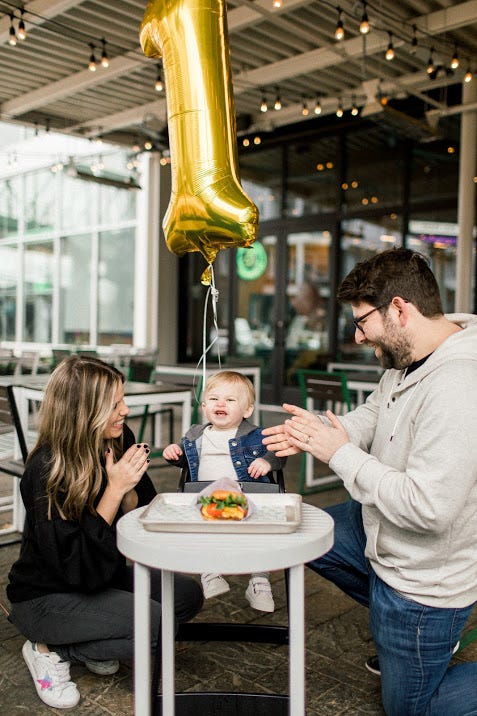 "I'd laugh," she said. "I would laugh really hard. I don't think we have many vegetarians in our family, so I don't know if that is likely."

"But it would be very ironic."