Chicken is the pillar of many home-cooked dinners. It can be baked, fried, or grilled, dressed up with spices or kept simple on the barbecue, paired with pasta and rice or left to shine solo.

There's so much you can do with chicken, it's easy to feel overwhelmed and just stick to what you already know. So we decided to find you some inspiration and lessen the workload.

Insider asked Michelin-starred chefs to share their favorite chicken dishes, along with their tips and tricks so you can easily re-create their recipes at home.

From chicken kebabs to poulet à l'Estragon, there's sure to be a dish on here for everyone.

Chicken kebabs are perfect for nights when you want to fire up the grill. 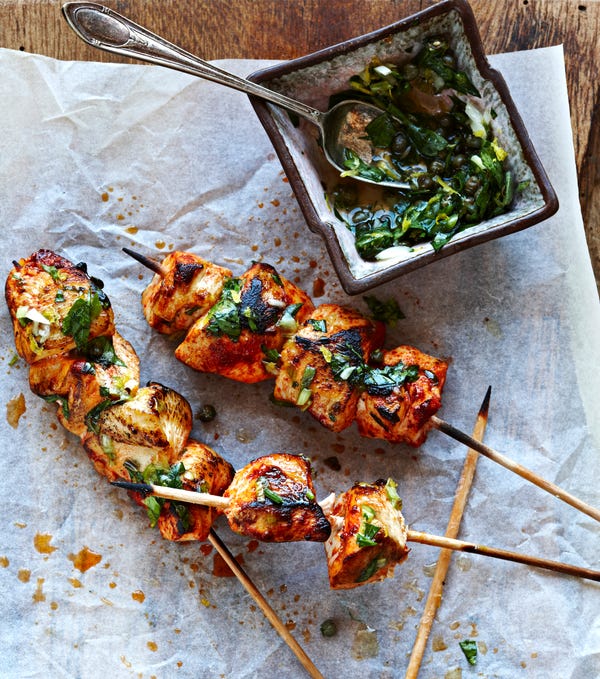 Gopinathan uses chicken thighs and marinates them in a ginger and garlic paste with some olive oil, salt, and lemon juice for half an hour. He then covers the thighs in a separate marinade with garam masala, chili powder, coriander powder, cumin powder, and yogurt.

"Add a bit of cornstarch to the mix so it holds up, and marinate the thigh meat for one hour," he advised.

Then just skewer the meat on a long rod and throw it on the grill with a sprinkle of chaat masala.

Gopinathan also loves making chicken curry, especially when he wants leftovers for the rest of the week. 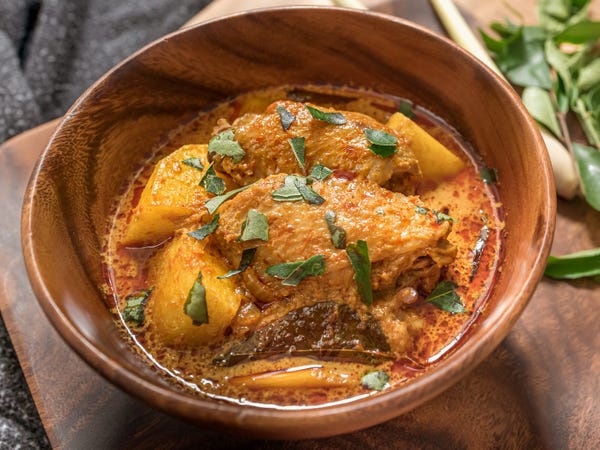 Gopinathan is full of tips when it comes to chicken curry, which he said should always be made with dark meat.

"You pretty much never use the white meat of a chicken because the Indian curry involves a slow and long process," he told Insider. "The white meat gets too tough — you don't want to eat that."

Gopinathan recommends mixing equal parts ginger and garlic — with a little bit of salt — for the marinade, and using red onions for the base of your curry because they have less water.

"A chicken curry should also always have a thickening part, which gives you the body of the curry," he added. "One is coconut milk, the other would be a paste of cashew nut — or any nut for that matter. You can also use a sesame paste." 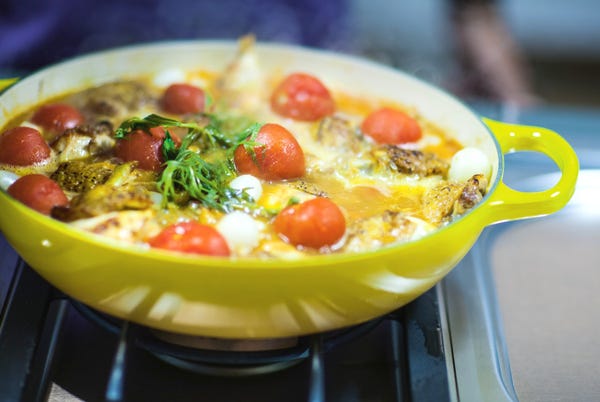 Boulud, who recently opened his newest restaurant Brasserie Boulud at the Sofitel Dubai Wafi, told Insider that he learned how to cook this dish in Lyon, France, when he was just 15.

"It brings back so many happy memories of being a young chef," Boulud said. "This recipe will always be a summer favorite of mine."

For this dish, you'll need tomatoes, tarragon, and vinegar to "drown the chicken in a delicious sauce."

"In France we use tarragon quite a lot, but you don't see many recipes with tarragon in America," Boulud said. "I think it's underutilized. It's so fresh and unique, but you could use basil if you prefer something more familiar.

The French chef said it's also very important that the tomatoes you use are "beautifully ripe," as they bring a "unique sweetness to the dish."

"And be patient and allow your chicken to caramelize well on both sides," Boulud added. "The flavor from the roasted chicken will provide richness to the dish that is essential."

Or take a trip to Morocco with a delicious chicken tagine. 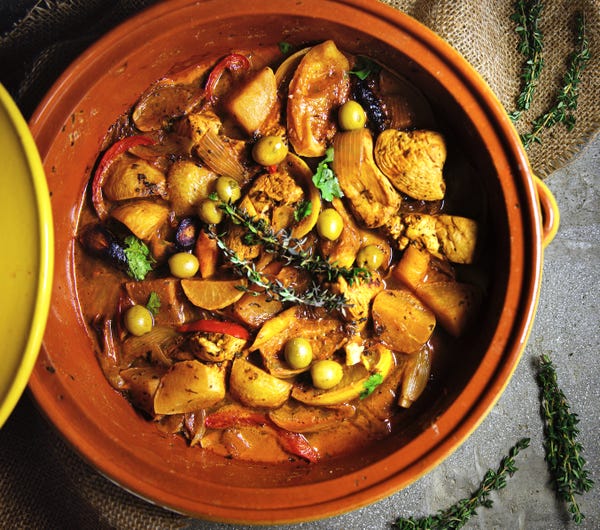 Chef Alex Hong, who is currently hosting virtual cooking classes with CocuSocial, is a huge fan of this flavor-packed dish.

"It's sweet and sour and really delicious," Hong, the owner of Sorrel Restaurant in San Francisco, told Insider.

Hong recommends using dark meat for the dish and giving it "a good sear" on the pan.

"Deglaze it with a bit of white wine and brown sugar and then add a little bit of chicken stock," he said. "Then cover it with green olives, Meyer lemon, some dried figs or fresh figs, and just let it go in the oven low and slow."

"All those flavors melt together," Hong added. "And you've got this big chicken stew that is great with rice or couscous."

If you're craving a light and simple dinner, look no further than a comforting bowl of chicken stock. 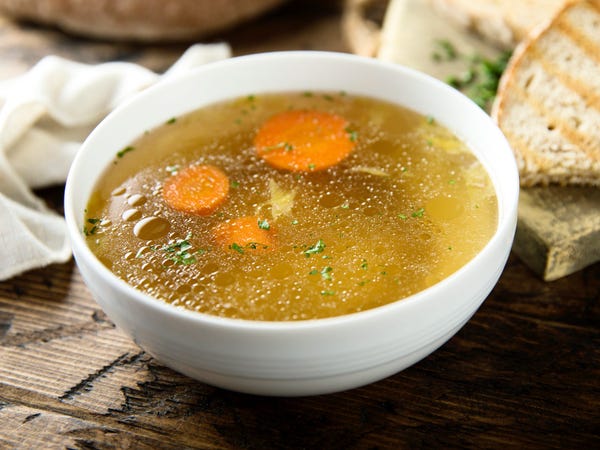 Val Cantu, the head chef at Californios in San Francisco, told Insider that he's been making a lot of chicken stock during the pandemic.

"I'll take a whole chicken, break it down into smaller pieces so it cooks more completely, and cover it with filtered water," he said.

Cantu then brings the pot to a simmer and "skims off all those impurities" from the top for the first 20 to 30 minutes.

"I do chicken stock a little bit differently than general chicken stock recipes," he said. "All I'll put is chicken and, at the end, I might add a mild seasoning of salt in case I want to use it for whatever later."

While Cantu will often add his chicken stock to rice — using it instead of water in his rice cooker — he also enjoys drinking chicken stock on its own.

"Most of the time I won't add any spices, no vegetables," he said. "If you've done it right, it's really pure and delicious on its own. I love it."

Roast chicken is a classic that will impress your family and friends. 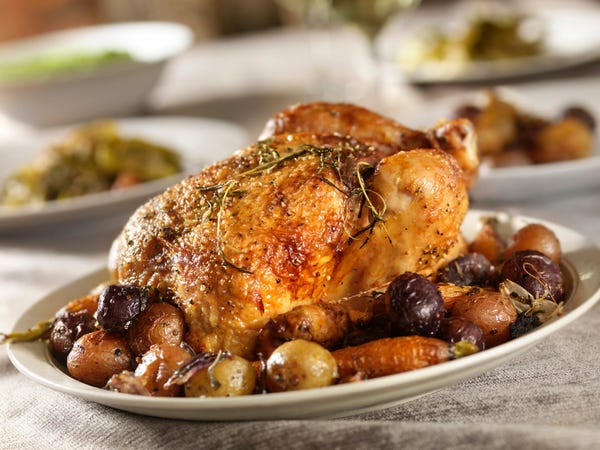 "Everyone likes a roast chicken anywhere in the world," he said.

When it comes to cooking the chicken, Liebrandt said it's especially important for the skin to be crispy.

"Leave the chicken unwrapped in your fridge at home overnight," he advised. "This will dry the skin of the chicken inside the fridge."

"When you roast it, you'll have less water in the skin," Liebrandt added. "You'll get a nice color, and a nice crispy skin."

Upgrade your waffles by adding some chicken karaage to the mix. 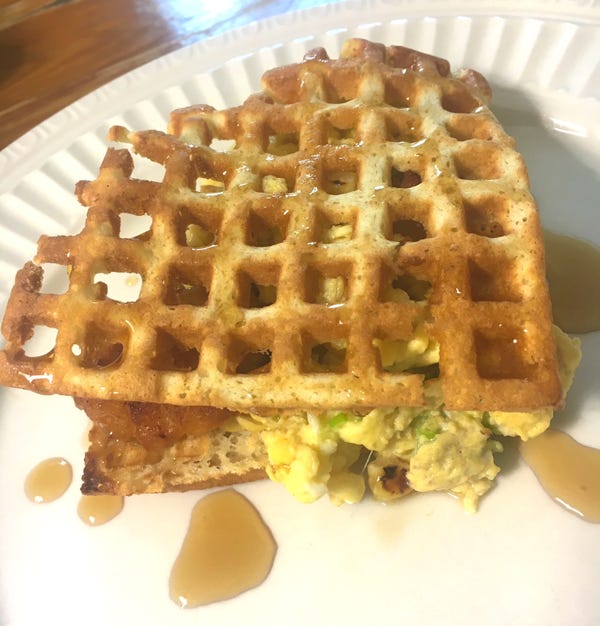 Suzette Gresham, who runs Acquerello in San Francisco, calls this dish "one step up from chicken and waffles."

To make your own chicken karaage at home, season your chicken thighs with soy sauce, sake, and ginger, and coat them in flour or potato starch before frying. You can add other additions to your marinade as well, such as garlic or curry powder.

And Gresham said it's essential to top everything off with some warm maple syrup.

"It makes a world of difference," she told Insider.