A WOMAN who married her female best friend – before they fell pregnant "in tandem" using a £72 home insemination kit and a sperm donor found online – told how their babies were born three days apart.

Inseparable after meeting at school, Karina Rincon, 31, and Kelly Mesa, 32,moved from Venezuela, South America, to the USA after graduating. 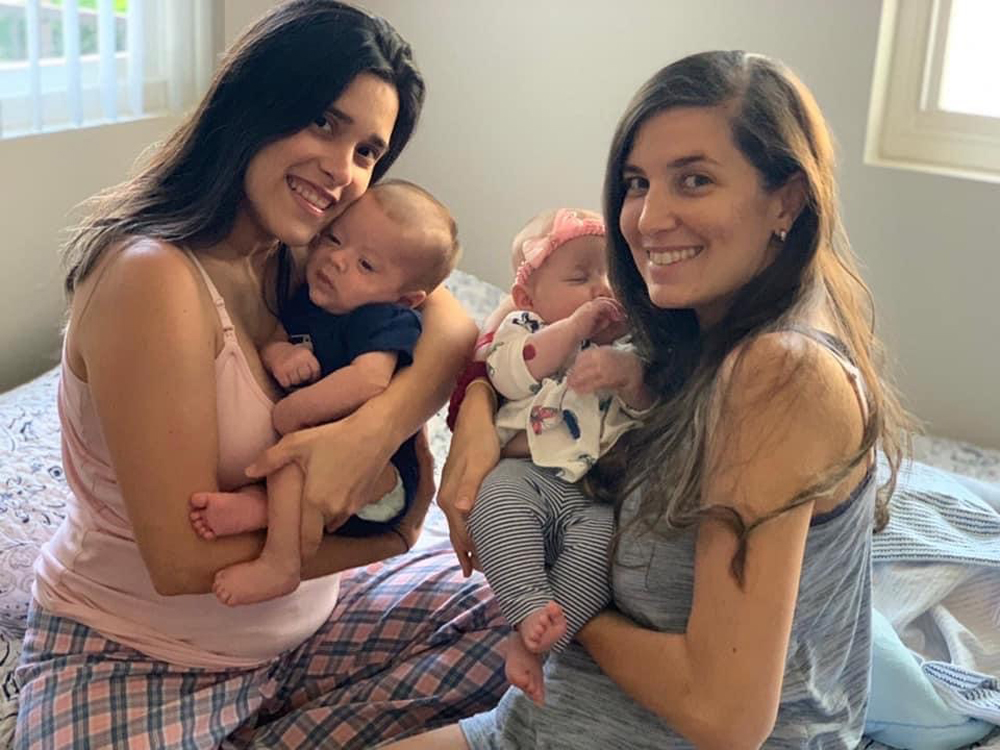 Both successful biomedical engineers, after confessing their true feelings, they became a couple and married in September 2017, when their thoughts turned to starting a family.

Priced out of expensive IVF clinics, they bought a £72 home artificial insemination kit, before finding a sperm donor online and doubling their chances of having a baby by both trying – never thinking they would each fall pregnant on their first attempt.

Now living as a family of four in Los Angeles, California, after Kelly gave birth to baby Leo on July 7, 2019, and her wife to his sister Sophie just three days later, Karina said: “I’m really glad we didn’t go into labour at the same time.

"That was a worry of ours, but thankfully, being three days apart meant that I could be there when Leo was born and Kelly could when Sophie was. 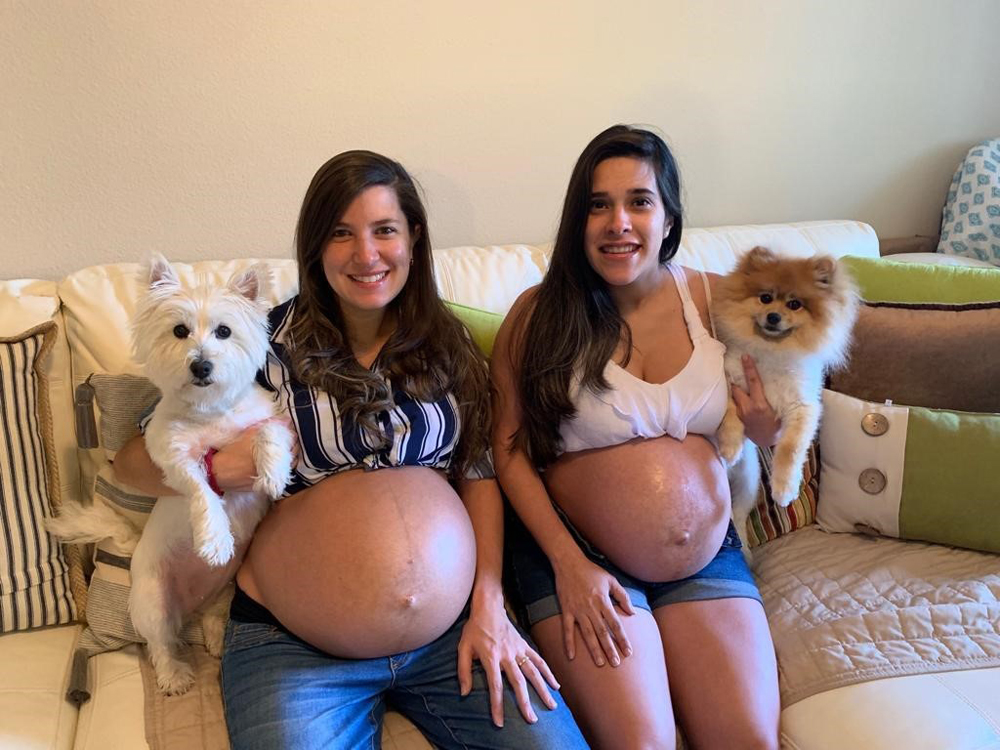 "People told us that we would kill each other being two pregnant women in the same house, with all those hormones flying around but, actually, it was great to go through this with the love of my life, who completely understood how I was feeling.”

Likewise, things could not have turned out better for Kelly.

She said: “We are so in love with our babies. People always ask if they’re twins and we joke, ‘Almost.’”

When the couple first met in secondary school, their friendship was purely platonic and they never dreamed they would fall in love.

Sharing confidences about everything, including dating, back then they were positive they were exclusively attracted to men.

After graduating, they moved to the USA and remained best friends – only their feelings developed and they realised they were no longer platonic. 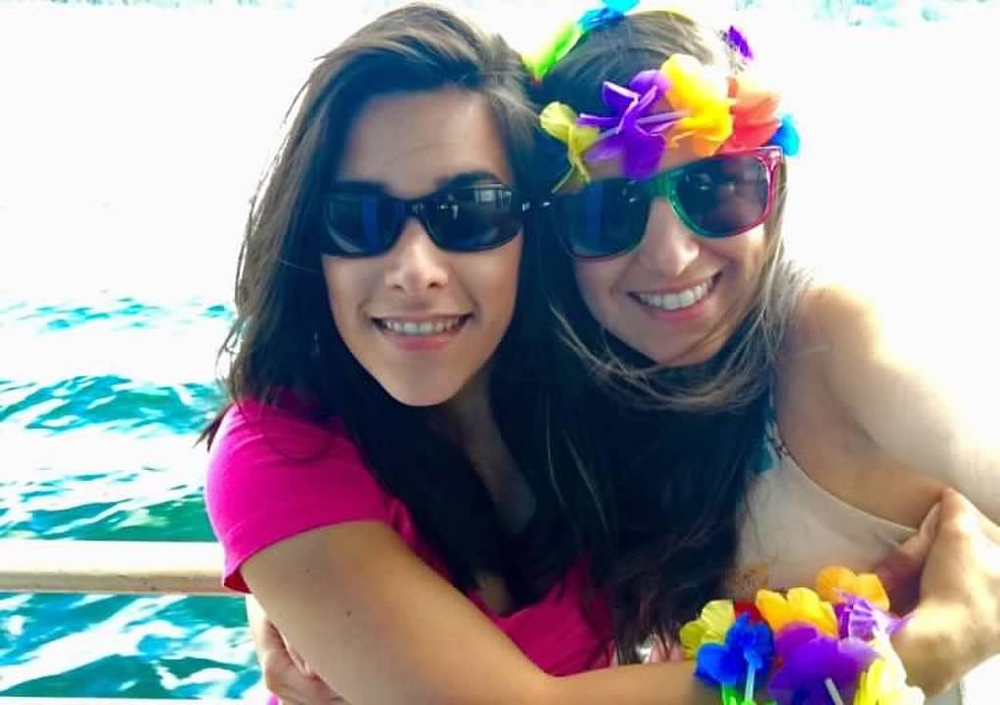 Karina said: “Whenever I’d hear Kelly talking about boyfriends, I’d feel almost jealous and started to realise that it was because I had romantic feelings for her.

“She moved around a lot but, eventually, we found ourselves in the same city when we both moved to Miami. I was so nervous, as I had no idea how she would take it, but I had to tell her how I felt. Thankfully, she felt the same.”

For the first few years of their relationship, Kelly and Karina kept their love secret from their families – eventually coming out in 2017, just before marrying.

Together, the pair began to research their options for children, but soon found themselves priced out by expensive IVF clinics and sperm banks.

How does sperm donation stand legally in the UK?

Sperm donation can help couples struggling to have kids of their own or single women who want to start a family.

If you donate your sperm through a fertility clinic or a sperm bank, you won’t have any responsibilities or rights towards a child conceived using your semen.

However, as of April 2005, children conceived through sperm donation do have the right to ask for certain information about their donor once they reach the age of 16.

When they turn 18 they can also request to know the name and last known address of their donor.

The main reason men choose to donate their sperm is to help couples who can’t conceive naturally, or if they have a strong desire to pass on their genes to another generation.

In the UK, donation in exchange for payment is prohibited by law.

Then, in early 2018, they discovered a company online that offered at-home artificial insemination kits for just $89 (£72).

Kelly said: “Some of the clinics we looked at would have cost thousands and thousands – and that was just to find the donor. Then, there’d be all the costs of insemination, medication, doctors’ appointments and so on.

“The awkwardness of it all was also a component. Being able to be at home with a DIY kit seemed less invasive.”

One thing that was of the utmost importance to the couple was knowing as much as possible about their sperm donor – information that would have been hugely costly if they had used a private clinic.

Instead, they found an online network called CoParents.com, which matches couples looking to start a family with potential donors. 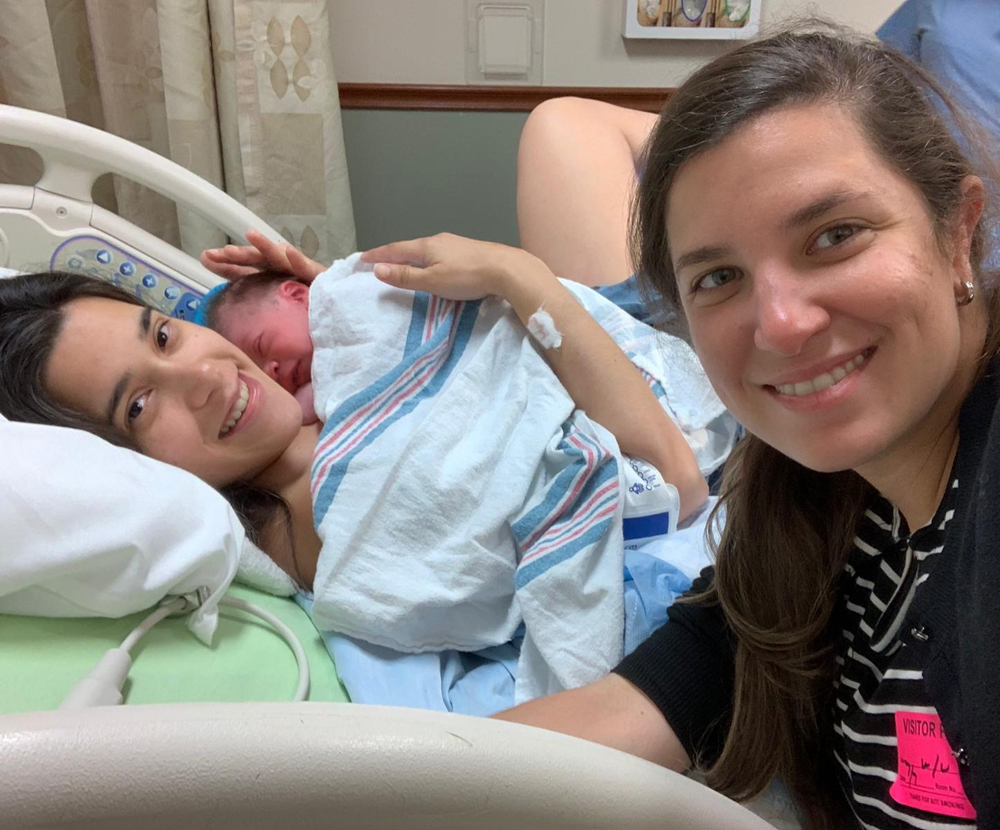 As registration on the site is free – though users do also have the option of paying for members-only access – it helped get around the issue of budget.

Setting up a profile, Kelly and Karina explained who they were and what they needed – and soon saw the messages flooding in.

Karina said: “Across the course of three months, we filtered the responses down to around 15 which we liked the sound of.

“Then we got to know them, sending questionnaires about their family history and genetics, and also what their motivation was for wanting to help was.

“We wanted somebody truly altruistic, but unfortunately not everybody out there is genuine. 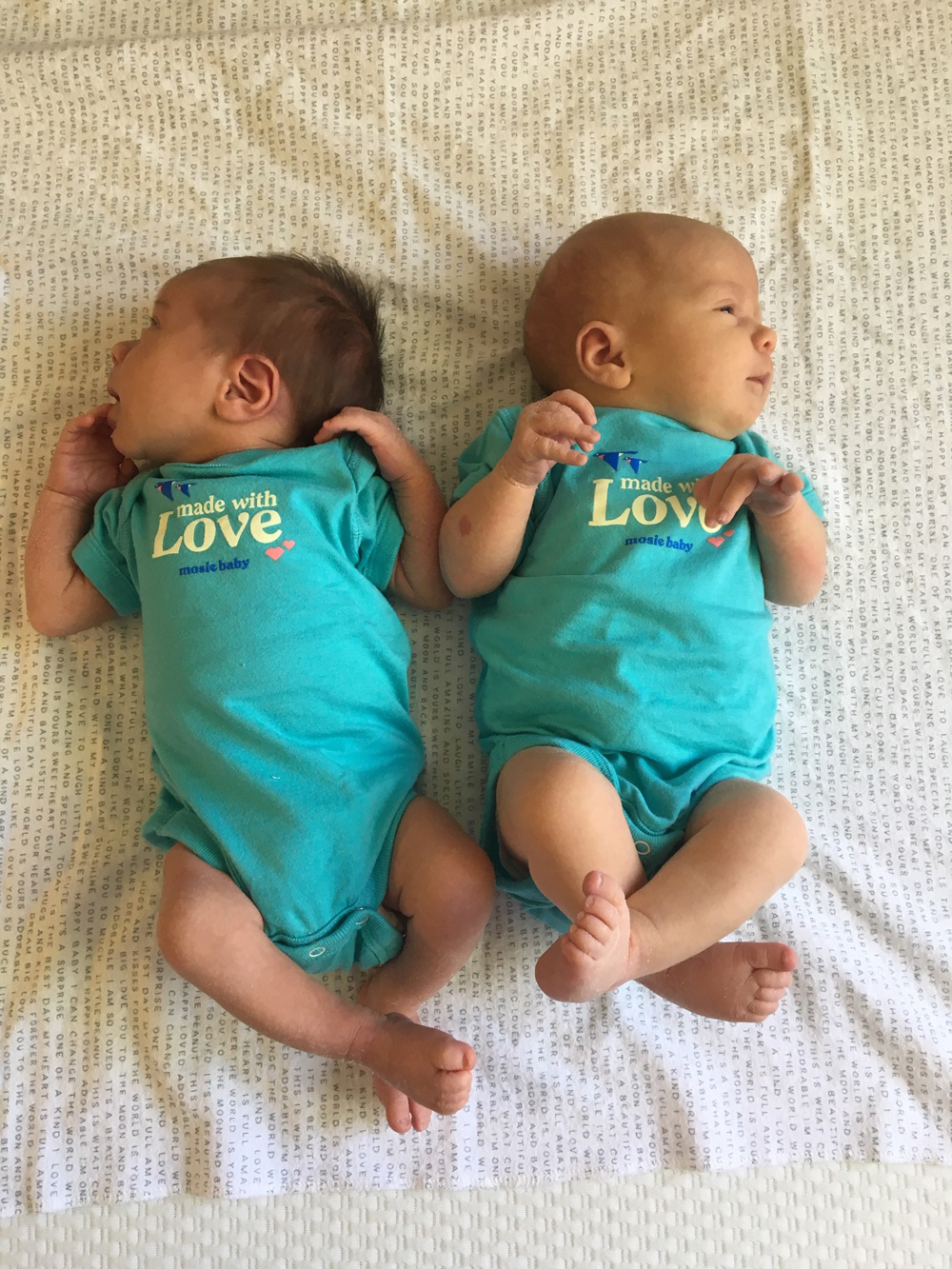 “We narrowed it further and further down until there were just two donors. We would joke that it was like the reality show The Bachelor.”

Kelly and Karina then met the remaining two potential donors in person – neither of whom asked for money – before settling on their final decision in October 2018.

After all three parties took part in genetic screening – the results of which did not bring up anything of concern – it was time to start trying.

“The results seemed to show that I wasn’t pregnant, so we thought, ‘That’s okay. Let’s just wait and see what happens with Kelly,’” she said. 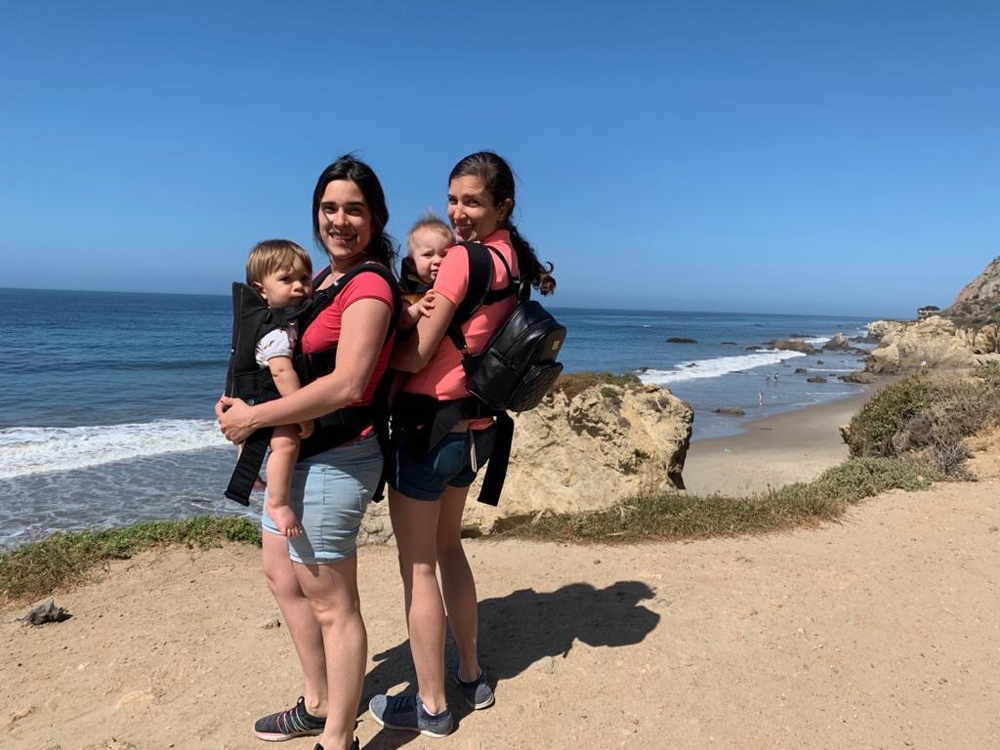 “Days later, in our tiny new apartment in Los Angeles, we got a test for Kelly to take.

"Two lines appeared, but they were so faint that we didn’t know what they meant.“I said to her, ‘My blood test has shown I’m not pregnant, so why don’t I take a test, too, as a control?’

“But when I did, mine looked the same – two little lines.”

For clarification, Kelly and Karina sent a photo of the tests to a nurse friend – who replied saying she thought they were both pregnant.

Karina added: “We took some more tests which confirmed it. We were both expecting, and around four weeks along.

“We couldn’t believe it – what were the chances? 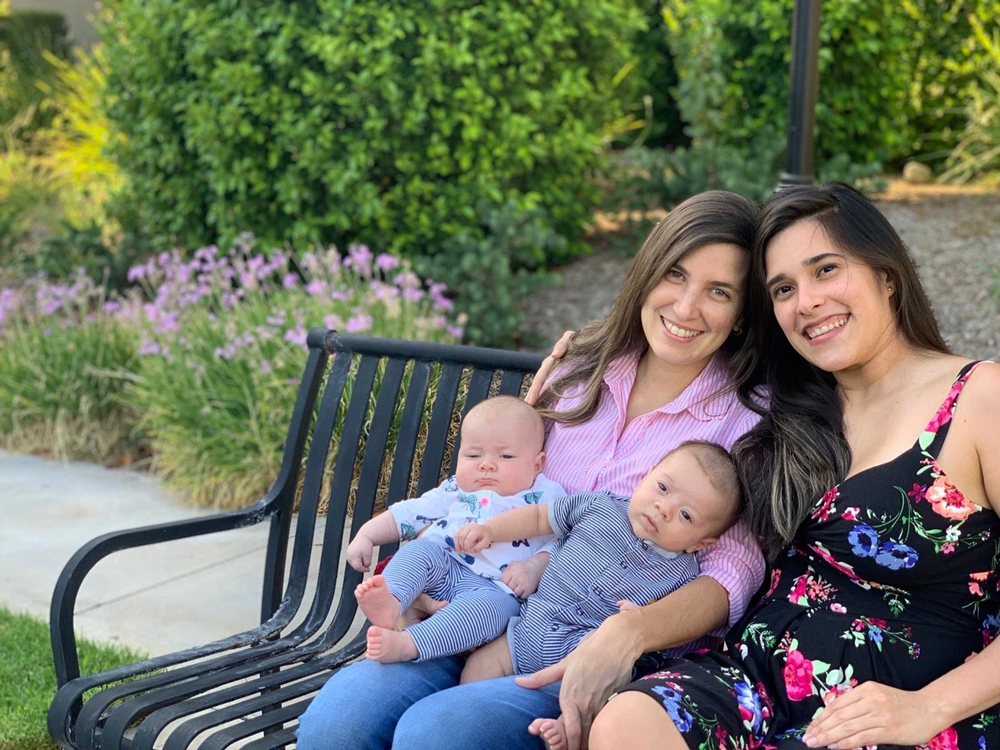 “The reason my blood test hadn’t shown anything was because it was too early, so the levels of hormones in my body weren’t high enough.”

Gobsmacked that they had both been successful on their first attempt, Kelly and Karina then navigated the next nine months of pregnancy together.

Karina added: “We both understood how the other was feeling. It was nothing like it would have been if we’d had babies with men, where one of us wouldn’t be facing the limitations and challenges of pregnancy.

“The only difficult thing was sharing a bed with two ginormous bellies and both of us wanting to pee every five minutes.”

She recalled: “Lots of staff at the hospital initially thought Karina was just my friend who happened to be pregnant at the same time. 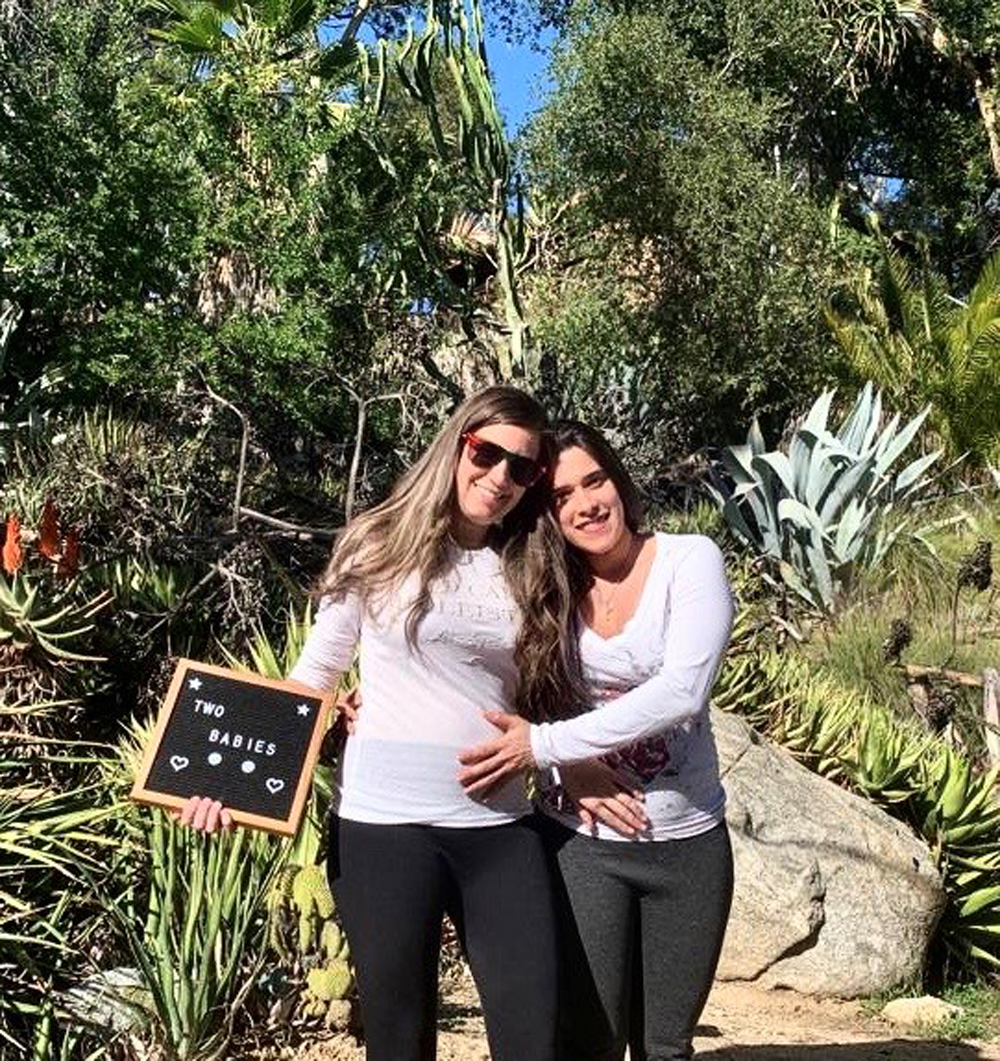 “They couldn’t believe it when I told them, ‘She’s my wife, and she’s due any day, too.’

“The delivery was actually fairly quick and I was so grateful Karina could be there with me in the room.

"She was ready to pop by then, so nurses kept telling her to go home and rest, but she wanted to be by my side.”

Kelly concluded: “My advice to other couples would be to be systematic."

Karina added: “My advice is to be patient. I still can’t quite believe the way things all happened for us, but don’t give up hope.

Super sperm donor Mitch Kennedy baffled This Morning viewers with his plan to prevent incestuous relationships among his expanding brood.