A WEDDING invite which asked guests NOT to wear face masks and offers them a special "cough room" has sparked outrage online.

Earlier this week, Twitter user Dan White shared a photo of the invite where the bride and groom declared they were "keeping their date" – despite the ongoing coronavirus crisis. 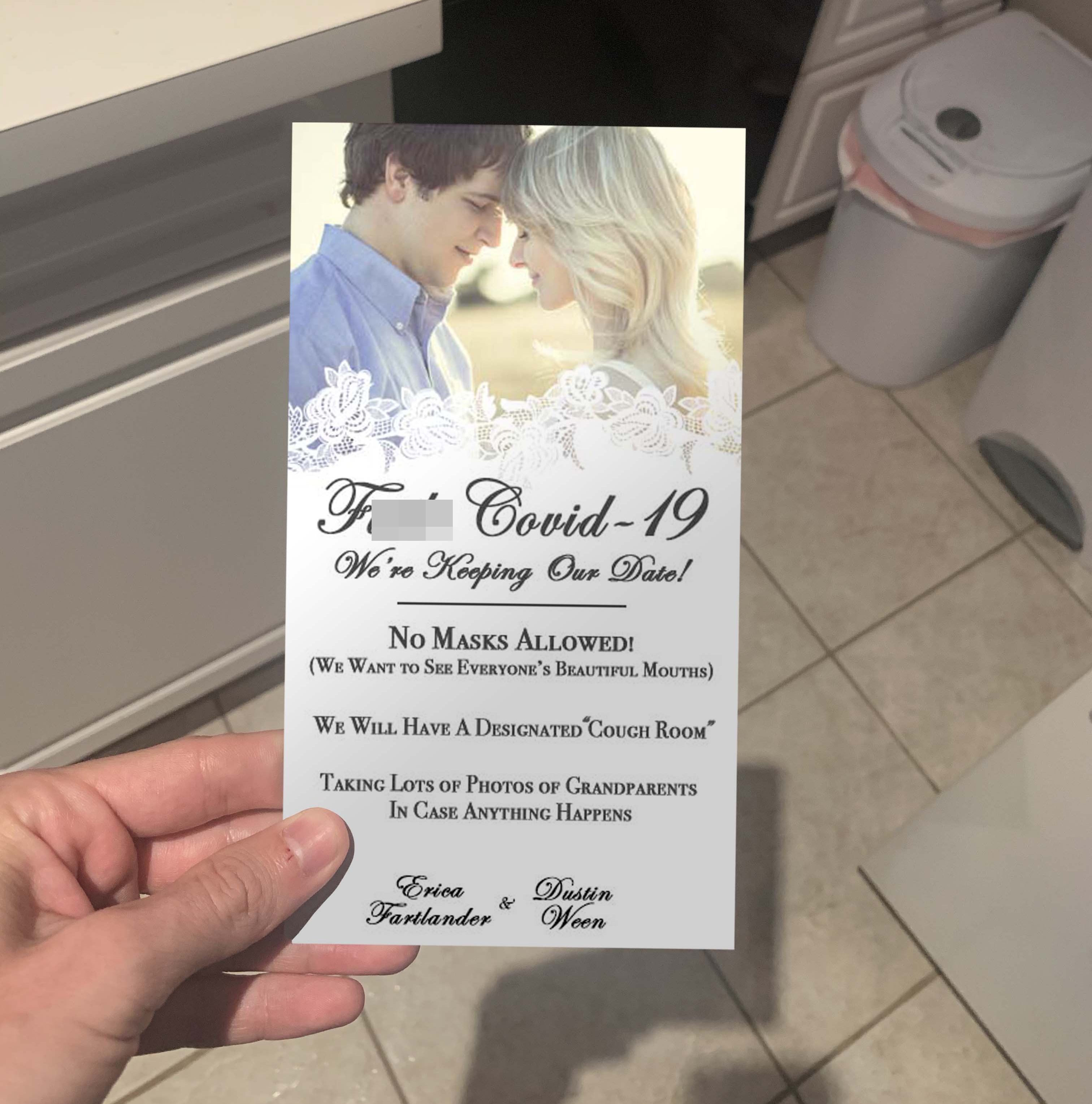 Tweeting a picture of the invite – which has "F**k Covid" written at the top – Dan wrote: "Damn. Just got this in the mail."

Laying out the ground rules for the wedding, the invite reads: "No masks allowed! We want to see everyone's beautiful faces."

In the UK, couples are currently allowed to have 30 attendees at their wedding but this will reduce to 15 on 28 September and guests are required to wear face masks.

What's more, the couple continued: "We will have a designated 'cough room'. Taking lots of photos of grandparents in case anything happens!" 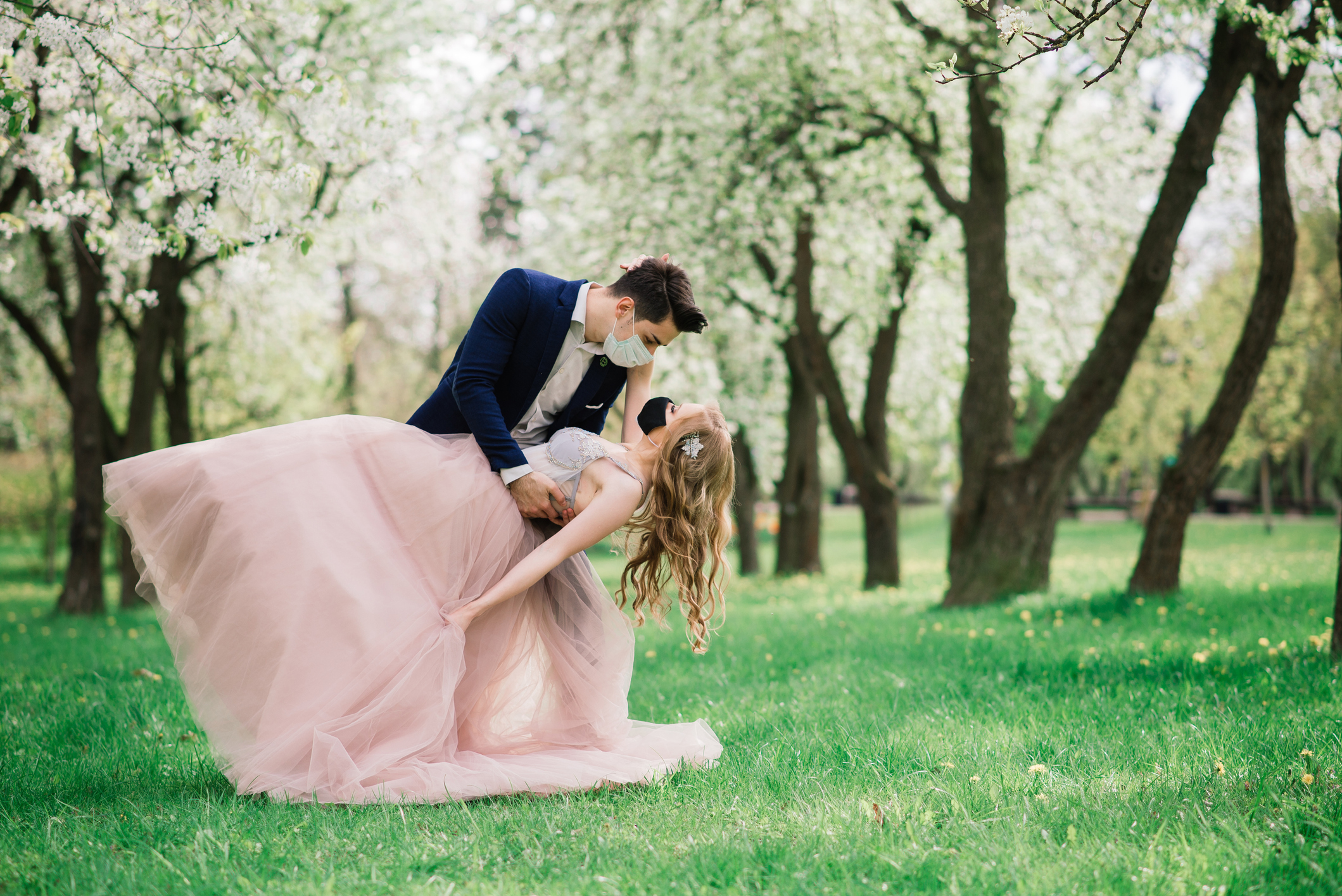 The happy couple "Erica Fartlander" and "Dustin Ween" then signed off the wedding invite – which is when it dawned on people that it was meant as a joke.

The invite has racked up over 180,000 "likes" and encouraged other users to share their experience of coronavirus weddings.

One replied: "I know this is a parody (names are a big giveaway!) but people are legitimately doing things like this and it's still infuriating."

Another wrote: "My fiancé and i work in the wedding industry and literally GOT COVID from a wedding this month, where not a single guest was wearing a mask. Full offence but f**k those people."

Weddings have been given a big shake up since the pandemic shut down the idea of a traditional ceremony and party in March.

Currently, small weddings in England and Wales are allowed with up to 30 attendees, including officials and staff.

But in an address to the Commons on September 22, Boris Johnson announced that the number of people allowed to attend a wedding will be cut to just 15.

The new rules come into force on Monday, September 28.

In Scotland, the amount of attendees is capped to 20 people for weddings, as well as receptions.

Anyone that is not a part of the same household or support bubble should continue to social distance themselves.

And should there be a gathering over the limit, anyone participating could face a fine of £100, which will be doubled for subsequent offences rising up to £3,200.

This is different to normal gatherings where a maximum of six people will be allowed to meet – indoors or outside – from Monday, September 14.

However, Wales is continuing to allow up to 30 people to meet up in outdoor settings.

Meanwhile, couples can still have a traditional first kiss at the altar as they will not be made to wear masks on their special day.

The guidelines also say that if you are planning on exchanging rings, then you will need to wash your hands first.

"Took me a while to realise that it is in fact satire," a third replied. "The fact that I couldn't tell at first is truly indicative of the times we live in…"

Last week, a bride was slammed online after she revealed her grandma who had tested positive for coronavirus attended her wedding days before her death.

The newlywed posted a photo of her husband's grandparents attending her big day on Facebook and asked for help editing the image so it looked like they were standing together.

For more wedding fails, this bride-to-be offered a guest £100 NOT to wear her pretty dress to the wedding – so do YOU think it’s too much?

And people praised this bride’s stunning white lace dress… until they realised it’s actually her MOTHER.

Plus this bridezilla issued a bonkers list of wedding rules including BANNING them from talking to her & they must bring a £60 gift.