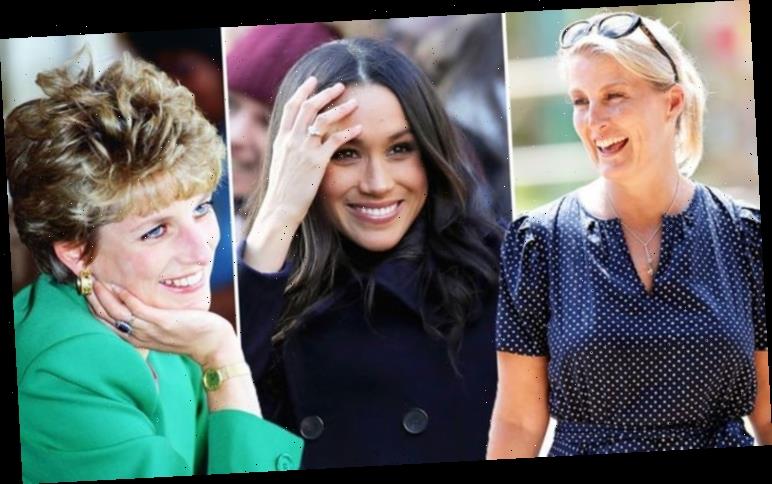 Prince Edward and Sophie Rhys-Jones get married in 1999

Sophie, Countess of Wessex and Prince Edward have been married since June 1999. Meghan Markle married her husband, Prince Harry, on May 19, 2018.

Prince Edward proposed to his wife with a diamond engagement ring which was made by the Crown Jeweller at the time.

She said: “The Countess of Wessex’s engagement ring given to her by Prince Edward and created by Garrard, appears to feature a large two carat oval diamond, complimented by two 0.4 carat trillion shape diamonds on either side, set on a white gold band.

“If purchasing this specification of ring at many other Mayfair jewellers, it would be priced in the region of £35,000.”

Prince Edward purchased the jewel from Garrard, who was the Crown Jeweller at the time, creating a range of pieces for members of the Royal Family.

The Garrard ring had a special significance and link to Princess Diana, as her engagement ring was also from the jeweller.

Princess Diana’s famous sapphire and diamond engagement ring had been picked from their collection 18 years before Sophie became engaged.

Not only did it have a link to the Princess of Wales, and Kate Middleton who now wears Princess Diana’s jewel, but it has similarities to the ring worn by Meghan Markle.

The commonalities of the band can be found in how they were designed.

Meghan was given a piece that was specially designed by Prince Harry in the style of a trilogy ring.

It featured three stones which had special significance to the royal couple.

These included a diamond from Botswana and a jewel from Princess Diana’s collection.

In 2019, the diamond engagement ring was redesigned with a new diamond studded gold band.

Commenting on the design of Sophie’s band, Charlotte detailed the similarities to the engagement ring worn by the Duchess of Sussex.

The expert continued: “This style of engagement ring is known as a trilogy ring.

“Traditionally the three central diamonds are said to represent the couple’s past, present and future, making it a very romantic and meaningful choice of design.

“Meghan Markle’s engagement ring, given to her by Prince Harry, is made up of a central round brilliant diamond and flanked by cushion cut diamonds.

“It has helped to revive the desire for the trilogy look. The growing popularity of the trilogy engagement ring was a distinctly growing trend for 2020 and I believe it will continue to be a popular choice in 2021.”