“It was the only job I applied to,” Molly Swindall said. She grew up outside Atlanta and recently finished a master’s degree in security and intelligence in, and sponsored by, the European Union. “I put all my eggs in that basket. It was my dream job.”

She was entering a tough job market. But piloting the most recognizable vehicle in America for a year isn’t an easy gig to land. The year before Ms. Swindall applied, 7,000 people applied for 12 positions, so it’s not just because it’s challenging to parallel park the Oscar Mayer Wienermobile, an automobile that is also a 27-foot-long frankfurter.

Knowing she needed to stand out in her application, Ms. Swindall, 26, sent the Wienermobile hiring managers a literal picnic spread of her talents while paying tribute to the greater Kraft Heinz ecosystem of its parent company.

In a cardboard box, she arranged artificial grass and a checkered blanket on top of which were her “cheesy cover letter” (wrapped in recycled Kraft Singles packaging), a “relishing résumé” (stuffed in an empty Heinz relish bottle) and a pack of paper wieners baring her face (“so they could actually picture me as a Hotdogger”). Within a couple of weeks she got the call: She’d been chosen for an in-person interview.

The current Wienermobile fleet has been delivering its brand message across America since 1987. It has survived so far through mergers and acquisitions, even through the belt tightening of its investors. But, this year, disaster. Even as demand for Kraft Heinz comfort foods grew in 2020, the pandemic put a halt to the famous traveling show, just days before Ms. Swindall was supposed to fly to the headquarters for the final interview.

For the first time in 33 years, Oscar Mayer pulled its fleet of Wienermobiles (there are now six) off the road.

When the Wienermobile made its debut in 1936, the country was still reeling from the Great Depression (it would later be scrapped for metal to aid in war efforts in the 1940s). The original goal was to bring surprise and joy to the people of Chicago, where Oscar Mayer was founded, during those challenging times. 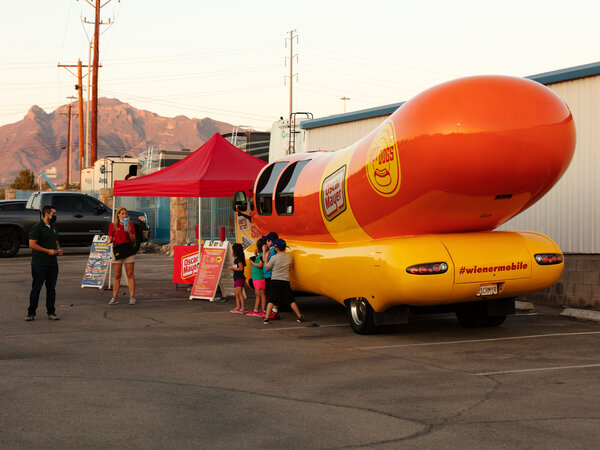 “As you can imagine, how can you not smile when you see a giant hot dog on wheels rolling down the road, even if it’s just playing music and waving out the window,” said Ed Roland, the senior experiential marketing manager at Oscar Mayer. “That brightens people’s day.”

With that in mind, the company decided that being a source of frivolity during trying times is part of its DNA. So, this year, the Wienermobiles would roll on — with some changes.

The delay gave enough time for the company to plot new routes, load up on personal protective equipment for drivers and visitors, create signage that encourages social distancing and add instruction to the Hot Dog High training program that would meet the moment, like how to follow Centers for Disease Control and Prevention guidelines and how to complete daily wellness checks.

This year, the Hotdoggers are spending about two weeks in each place. They hope that staying in one spot longer will lessen the likelihood of potentially spreading the coronavirus; they tend to visit places with relatively low counts of coronavirus cases.

Actual Hotdogger job duties include sharing photos and videos on social media, answering questions about the brand and the vehicle (the most frequently asked question is if there’s a bathroom in the back, to which they respond, “No, it’s not a Weenie-bago”), and distributing swag.

While the Wienermobile isn’t stocked with actual hot dogs — a common misconception — its rear is full of promotional materials, including vanity license plates, key chains, lanyards, plush toys and Ryan Newman koozies (he’s the official NASCAR driver for Oscar Mayer). However, the most sought-after novelty item is the wiener whistle, a two-inch-long, four-note plastic kazoo replica of the weenie wagon.

First developed in 1951, the whistles were once included in packages of Oscar Mayer wieners. For the last few decades, though, it’s only been possible to get an official wiener whistle from a Hotdogger.

While in Rapid City, Ms. Swindall volunteered with Meals on Wheels. One day a woman approached her outside of an apartment complex to say she was visiting her mother, who has dementia.

“She said, ‘I think this is her dementia talking, but do you have something called a wiener whistle?’” Ms. Swindall said.

Ms. Swindall handed her one of the individually wrapped trinkets, and the woman burst into tears. Her mother hadn’t remembered anything in two years, she said, but the Wienermobile and its signature curio shone through the fog.

“She said, ‘Thank you so much. Especially with everything going on, this is unbelievable,’” Ms. Swindall said. “That’s why I think it’s important to be out here spreading joy when it’s in short supply for a lot of people.”

Mr. Roland said, “We know people think it’s odd, that it’s just a giant hot dog on wheels, but you’d be surprised at the connection that it has with people.”

Ms. Swindall said enthusiasts will drive for hours to witness the wurst in all its glory. One woman drove 12 hours — one way — just to see it.

“She was a fan of the Wienermobile growing up, and she was just so excited,” Ms. Swindall said. “As we were leaving she goes, ‘This is the best day of my life. And I’ve been married.’”

What has become more rare, given the coronavirus, is getting a ride in the mustard-and-ketchup-colored cab of the Wienermobile. The few riders who do get that privilege need to sanitize, mask up and sit at the furthest back seat. (The woman who drove 12 hours was one of them.)

Another rider, on a different Wienermobile, was granted the opportunity so they could fulfill a posthumous bucket list goal. They’d brought the ashes of a deceased family member who’d always wanted to go for a spin in the Wienermobile.

The Oscar Mayer website allows anyone to request a visit from the rolling pantheon of lunch meat. Already, Ms. Swindall has participated in parades, car shows and kids’ birthdays. She hopes that this year she’ll get an invite to give a newborn a first ride home from the hospital and attend more weddings. She’s already been a part of one, unofficially.

“We didn’t necessarily crash the wedding,” Ms. Swindall said. “I spoke to a man outside the venue and said, ‘Listen, this is going to sound insane, but I drive the Wienermobile. It’s right over there.’”

It took no additional prompting: The bride and groom ran out. As the roving foodstuff marketers were leaving, they gave the newlyweds wiener whistles and a plastic Wienermobile bank that read, “just linked.”

Ms. Swindall thinks the indelible moments of levity her job creates are all the more important this year, when times are tough. “Hearing that the Wienermobile has an impact on people’s lives, in ways that you wouldn’t even imagine, is really cool,” she said.

Because she has the job for only a year, she and her partner often take their ride out on the town during their scheduled days off. “If it’s not out on the road, that’s at least one less person I’m making happy,” Ms. Swindall said.