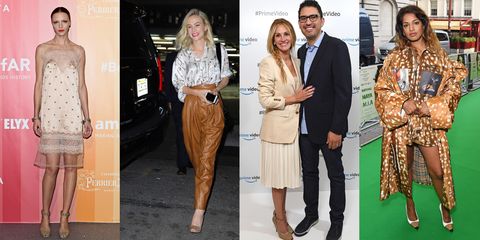 Burberry’s Spring 2019 show was undoubtedly one of the most anticipated shows of this year. With Christopher Bailey’s departure after 17-years at the heritage brand, the reigns were passed on to Givenchy’s former Creative Director Riccardo Tisci.

At Givenchy, the Italian designer was known for his romantic goth-inspired designs and celebrity-studded front rows. His power in Hollywood was also felt on the red carpet with countless iconic sartorial moments with some of the most stylish women in the world: Beyonce at the Met Gala, Cate Blanchett at the Academy Awards and Adele at the Grammys.

Tisci is bringing that same star power to the house of Burberry. Many of his former Givenchy muses like Rihanna and Madonna were quick to hit the streets in his new trench coats. The designer showed many iterations of the brand’s most iconic item for his debut in September.

Tisci’s debut show ran the gamut from classic suiting, whether with pants or skirts, to gowns and the coolest streetwear looks in between. The designer’s most ardent supporters like supermodel Mariacarla Boscono was the first to wear one of the brand’s new cocktail dresses to the amfAR Milano gala a week after she walked the Burberry runway. It Brit Carey Mulligan was sported around town showing us how best to wear the Burberry leather trousers—and M.I.A. so expertly hit the red carpet in one of the brand’s newest streetwear looks.

Bureberry also created several custom looks for Beyonce for her On The Run II tour. An all-over Burberry check ensemble, as well as this corseted bodysuit with pearl embellishments and a matching studded trench for a classic nod to the brand.