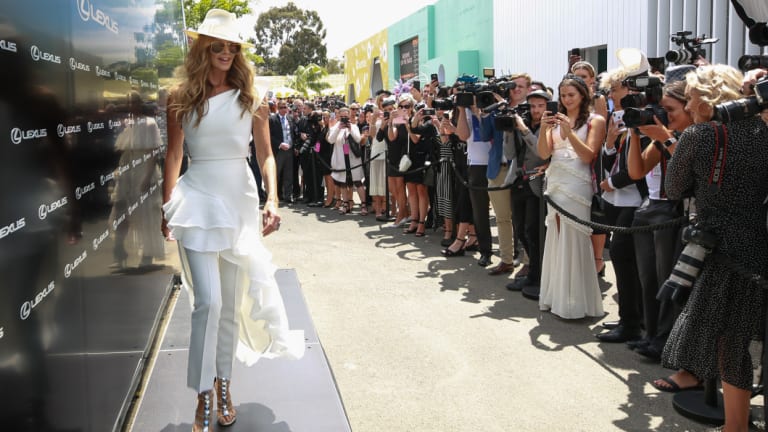 The Body in the Birdcage: Elle Macpherson arrives at Derby Day.

Elle Macpherson, aka The Body, was the big name on the opening day of the Melbourne Cup Carnival – but there was another four-letter name in lights at Flemington.

Toni, as in Maticevski, was the most prolific designer in the celebrity-rich Birdcage, as well as on the Myer Fashions on the Field stage.

Macpherson arrived nearly an hour late for her appearance at the Lexus marquee, wearing a white Maticevski one-shouldered pant suit with a Philip Treacy hat and Alexander McQueen sunglasses, which she refused to take off for photos.

"It's part of the look," she told reporters in the largest media scrum of the day.

With the Birdcage light-on in the international celebrity department, it was up to Macpherson to bring most of the star power on Derby Day.

"I just can't wait to get out and see what people are wearing. People look beautiful and the black and white theme makes for a very pretty picture when you walk in," she said.

Other celebrities wearing Toni Maticevski included Lindy Rama-Ellis (formerly Klim), Bec Judd, Bella Heathcote and Jennifer Hawkins, who is making her final spring carnival appearance as the face of Myer, a role she is departing after 12 years. 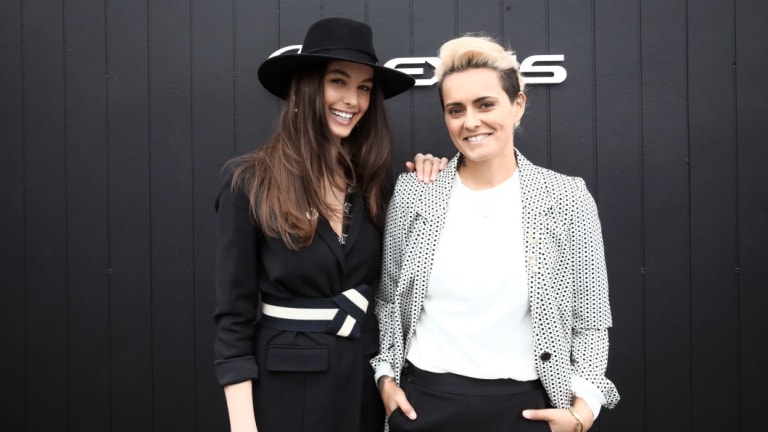 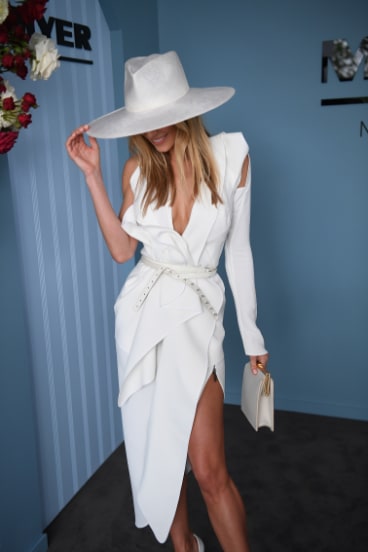 Final fling: Jennifer Hawkins at Myer Fashions on the Field.Credit:AAP

Hawkins said she loves the races and plans to continue attending after her time with Myer comes to an end on Oaks Day.

"I got to ride in a helicopter to the races, so I had adrenalin. I just want to have fun. I wanted to [wear] Toni and Alex [Perry] for the two days I am attending. I picked something off the rack, made a few tweaks and that was it."

She paired the tuxedo-style dress with a hat by Melbourne milliner Melissa Jackson, and natural hair and make-up.

Judging the men's fashion on the field, Hawkins said she was looking for confidence "but not over-the-top cocky – and someone who isn't wearing white shoes".

Big trends at the track included one-shoulder dresses and shorter hemlines, as well as the aforementioned tuxedo dress style, a favourite of Meghan Markle during the recent royal tour of Australia and New Zealand.

In terms of millinery, face veils and top hats continued the nod to femining tailoring, with media personality Nadia Fairfax, a guest of Kennedy, and Julie Bishop both opting for the style.

Ms Bishop, telling Fairfax Media she was inspired by Cara Delevingne’s outfit at Princess Eugenie’s wedding, chose an Armani shirt with tails and black skirt that had more than a touch of The Greatest Showman.

She teamed the look with a Philip Treacy hat, Sophia Webster crystal-heeled stilettos – which she has worn to Flemington before – and earrings by her friend and Liberal Party donor Margot McKinney.

At the Fashions on the Field, winner Kelli O'Dell was also decked out in Maticevski and a Stephanie Spencer hat that she described as looking like it had "texta marks" on it.

While there were more pants and jumpsuits in the competition than previous years, ultimately it was a more classic race look that won the day. O'Dell will qualify through to the Victorian state final on Melbourne Cup Day.

This year's Fashions on the Field competition incorporated a digital entry process and during the finals, the host, Rachael Finch, spoke about the women's professions, which ranged from engineers to journalists.