At the Groom Expo there are poodles everywhere: poodles dyed a kaleidoscope of colors, poodles with tribal designs shaved into their fur, a poodle that is shaved and dyed to look like a reindeer with a fawn carved into its side, a poodle whose hair is dyed in the shape of Tweety of “Looney Tunes,” a “Seasons Greetings” poodle dyed to look like a jack-o’-lantern on one leg and Santa on another.

Over 5,000 people, many of whom are pet groomers, recently gathered in Hershey, Pa., for the world’s largest grooming industry event. A few of them, easy to spot in the crowd or the parking lot by their dogs, have traveled from around the United States and Canada to compete. Creative grooming is an offshoot of traditional grooming in which dogs, mostly standard poodles (but also goldendoodles, bichon frisés, and even the occasional husky) grow out their fur and then have it cut and dyed by their handlers to represent a theme as living canvases.

The first grooming conference was held in Chicago in the early 1980s. Questions have been raised on social media and at the conferences about the welfare of the dogs, including how long they are asked to stand and the safety of the dyes.

Today, dogs are dyed with nontoxic permanent and semi-permanent dyes and chalks and have designs airbrushed into their fur. “Just as with humans, some dogs may have allergic reactions to dyes and other chemicals, which can lead to complications and endanger their health,” says PETA Senior Vice President Lisa Lange in her statement on creative grooming.

The crowd at Hershey is accepting and supportive — some groomers dabble in creative grooming themselves, dying a tail here or paws there. But as the grooming industry expands — it grew almost 7 percent in 2017 — people are beginning to call for controls in a previously unregulated industry. 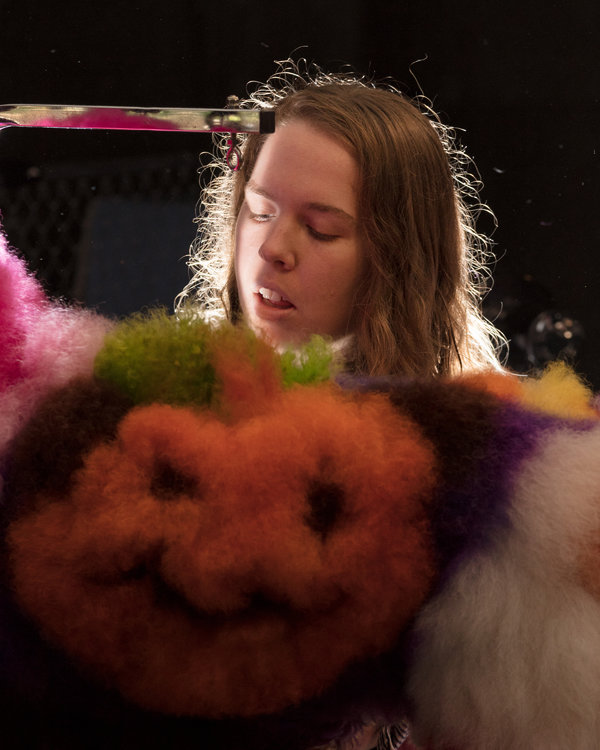 Nicole Beckman, 26, and her dog Ira, 8, shown above, are used to getting attention. Ms. Beckman and Ira, along with Ms. Beckman’s mother, Martine Gold, are at the expo where, for once, they kind of fit in. Ira was painted like a rainbow — how you might draw a dog if you were given a package of neon highlighters and a hit of acid. Ms. Beckman is a dog groomer from Ithaca, N.Y., one of over 70,000 in the country and part of a rapidly growing pet industry estimated to reach $72.13 billion in 2018, according to the American Pet Products Association. (That includes a modest $6.47 billion spent on pet services like grooming.)

“This is what happens when you lay your baby next to your dog when she’s two, three days old,” Ms. Gold said, laughing and waving a hand toward her daughter. “They grow up like this!”

Adriane Pope, 47, a competitive creative groomer from Conway, S.C., who was Anna Nicole Smith’s private dog groomer, has been competing in creative grooming since the late 1990s. Ms. Pope started a mobile grooming business in 1994, but now spends a lot of her time planning the look for her own dog, a poodle named Encore. She starts a year in advance by deciding on a theme, which have included the Cheshire cat and the Mad Hatter from “Alice in Wonderland” and all four members of Kiss.

“I think that when you’re walking down the street or when you stop at the gas station, everyone should know what that dog is, no one should ask,” she said. One groomer, Angela Kumpe, shown above, caused a stir when she brought her dog out in public after a competition: He was modeled after the evil clown Pennywise from the movie “It,.

Lori Craig, 41, of Moore, Okla., a third-generation groomer, has been practicing “creative,” as groomers call it, for 15 years. Her grandmother ran a grooming salon in Tulsa starting in the 1960s, the age of the pink and blue pastel poodle.

“I would run around her shop and try to steal all of the puppies and bring them home,” Ms. Craig said. Now, she owns five dogs as well as her own grooming business, called Doggie Styles.

Her standard poodle, Taboo, is 5 and has competed in four creative competitions: as an ostrich; in a sugar skull theme; as an entire butterfly garden with a fur monarch protruding off his back; and with flames, roses and another butterfly for a motorcycle-chic look Ms. Craig called “Firestarter.” For this competition, Taboo has a “Game of Thrones” theme dyed into his fur including a deer, a three-eyed raven, a lion, a white walker and a dragon along his whole body. She spent $500 on dye.

“I got bored waiting for the show to come back on,” Ms. Craig said, “and so I figured hey, at least I’ll have something to look at when I dye my dog!”

But beyond the festive feel of the competition, there are widespread calls for more regulation in the grooming industry. Rosemary Marchetto, 53, an interior designer from Northzale, N.J., who was not at the event and has no affiliation with creative grooming, has introduced Bijou’s Law: an unpassed bill that would require state-by-state oversight and ban heated cages, after her Shih Tzu, Bijou, died during a grooming appointment. She asked for a necropsy and sued, settling out of court. The bill is currently being decided upon in New Jersey, California and North Carolina. In trying to place controls and require state licenses, she said, “We will be saving lives.”

PetSmart, which says on its website that it has saved over 8 million animal lives through adoption, recently came under scrutiny after an investigative report was published by NewJersey.com that uncovered 47 pet deaths related to grooming in its stores in the last 10 years. (PetSmart responded saying the company is “not aware of any evidence suggesting that PetSmart services caused the deaths of these pets.”)

“Anyone can pick up a pair of shears and call themselves a groomer,” said Stephanie Shermer, 31, who works out of a privately owned grooming salon in Doylestown, Pa. “But a lot of dogs are brought to us unhealthy, and we may not know that. At the end of the day, we’re not vets. We don’t know if there’s an underlying health issue.”

Because so many groomers rely on word of mouth for referrals and new clients, safety is paramount. Working with sharp instruments and live animals, they consider it their responsibility to ensure that the dogs or cats they work with are safely restrained when bathing or at the grooming table, are never left alone, and are put at ease so that they don’t harm themselves or the groomer. The American Kennel Club offers courses for safety in the salon at trade shows and online. The course runs about five hours and costs $149 to certify a groomer or up to $349 to certify a salon as a “safe salon.” (Groomers do not need to be certified to compete in competitions at Hershey.)

Jess Rona, a comedian and celebrity dog groomer based in Los Angeles, is famous on Instagram for her glamorous dog videos (she grooms for celebrity dogs like Katy Perry’s Nugget). Ms. Rona thinks that licensing will increase the legitimacy of the grooming industry. A session with Ms. Rona costs $215, and takes about three hours. “There’s so many layers to dog grooming,” she said. “You need to have studied it. You need to understand each dog’s bone structure, anatomy, you have to know the breed standards for the haircuts. Our grooming looks different from the ‘crop shop’ groomers. We want to show how gorgeous dogs can be.”

Ms. Pope said that “Picasso has a canvas, a white canvas. My dog is my canvas. Any artist has a canvas. I look at my dog as my art, as my canvas. But it’s a living, breathing, moving canvas.” She extends this to herself as well; she dresses up as the character Rafiki and paints her face when showing her 3-year-old poodle, Encore, in a full “Lion King”-themed presentation.

On Sunday, the last day of the expo, 14 women lined up on the stage at the creative grooming competition, the headliners of the weekend. Each groomer has had two hours and 45 minutes to work on her dog.

Judges look for clean cuts, the consistency of the dye, and the creativity of the groomer. First place went to Cindy Oliver for her 1980s “Wuzzles” theme.

Leslie Waldrep came from Alabama. Her dog, Sterling, won people’s choice and third place for her Alabama-themed design, which included a white-tailed buck, a fawn, an aggressive blue jay flying after the acorn of an eastern gray squirrel and the state butterfly: a yellow tiger swallowtail.

“I’ve had this design in the back of my mind for two years,” Ms. Waldrep said, “and I’m very happy to bring it to you.”