A mum who suffered three miscarriages is over the moon after she finally gave birth to TRIPLETS – one for every baby she lost.

Hannah Swift-Cuddy, 30, and her wife Siobhan, 40, underwent three rounds of insemination fertility treatment, and while she fell pregnant, she suffered miscarriages every time. 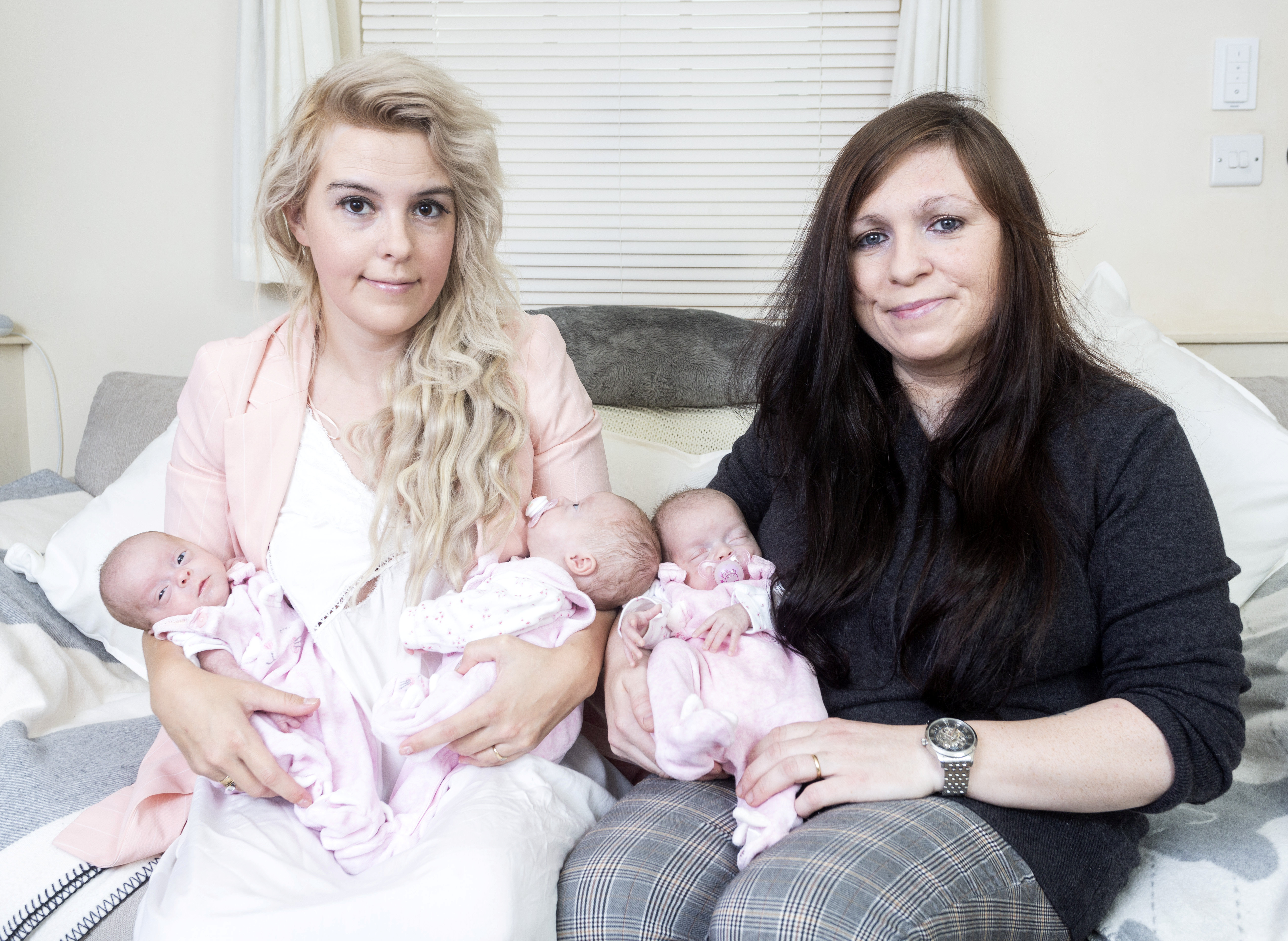 With Siobhan unable to carry a baby, and the pair fast running out of options, they turned to private experts to help them complete their family.

Medics discovered she had an immune system disorder which caused her body to produce blood clots so big they cut off the oxygen to her unborn babies.

She began taking blood thinners, and they took their chances with IVF, implanting their final two embryos in a bid to complete their family.

The pair from Parkgate, Cheshire, were delighted when scans revealed not only were they pregnant – but were expecting triplets. 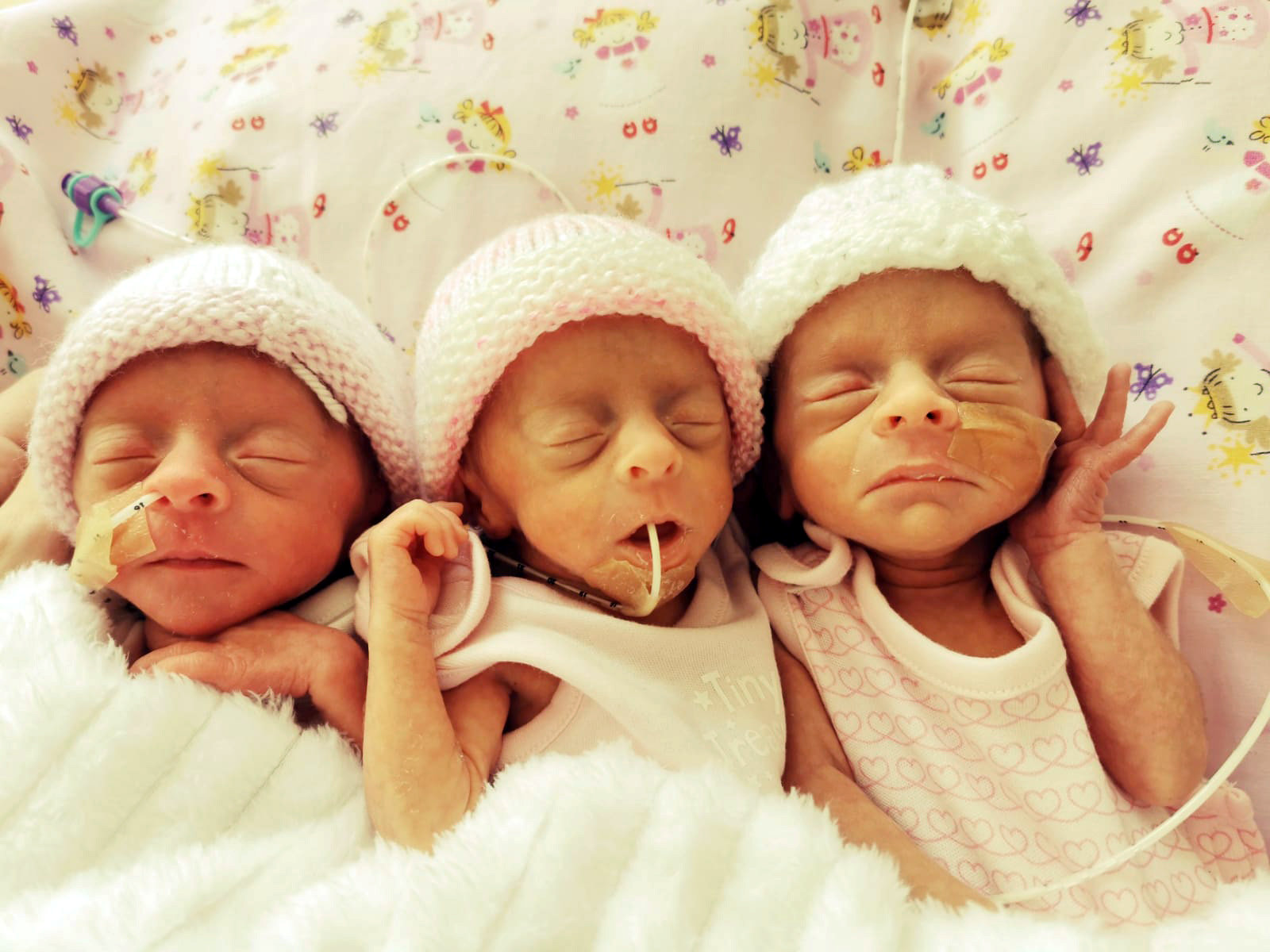 They welcomed Alice, Amelia and Everlyn on August 13 – and couldn't be happier with their 'girl gang' of six, including eldest daughter Isabella, two.

Hannah said: "Hearing the diagnosis was scary but then almost a relief because I had an answer finally and could start taking medication which could help me have a baby.

"I had three miscarriages before the diagnosis and then I fell pregnant with triplets – it was just absolutely amazing, and a complete shock too but we are so happy now.

"At first, the sonographer thought it was just shadows from the amniotic sac – she couldn't believe there were actually three babies. 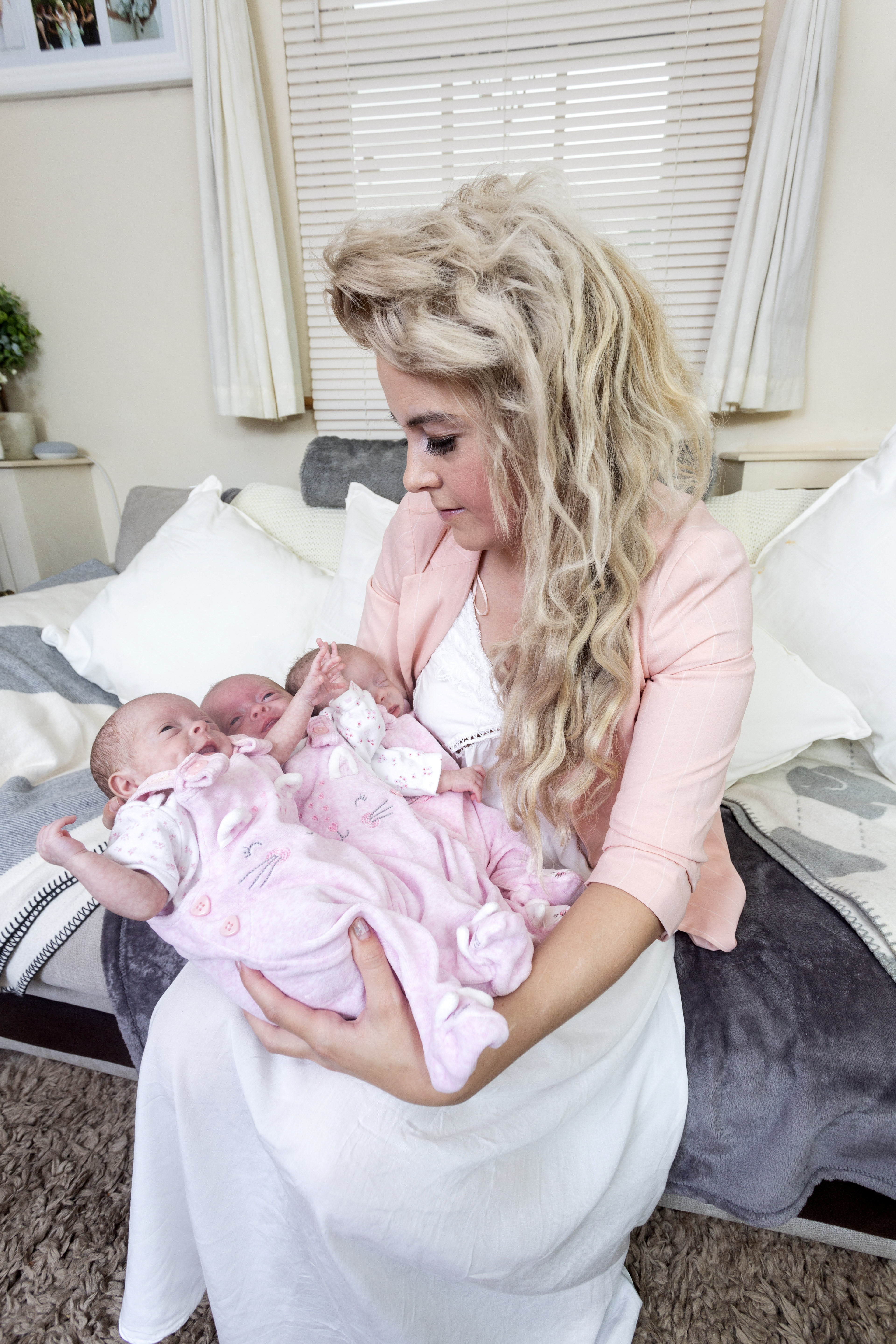 "Siobhan came running down the corridor, screaming 'It's triplets!'

"It was just incredible. We were so shocked but so happy that after losing three, we were now having three.

"It's fantastic having the girls home. Izzy is so cute, always giving them kisses!

"We went from one daughter to having four little girls in one go, really!"

Siobhan and Hannah knew they wanted a family and opted for intrauterine insemination in order to have children, using the same anonymous sperm donor each time.

After giving birth to Isabella in May 2018, social worker Hannah was extremely confused – as well as absolutely devastated – when she stared having miscarriages. 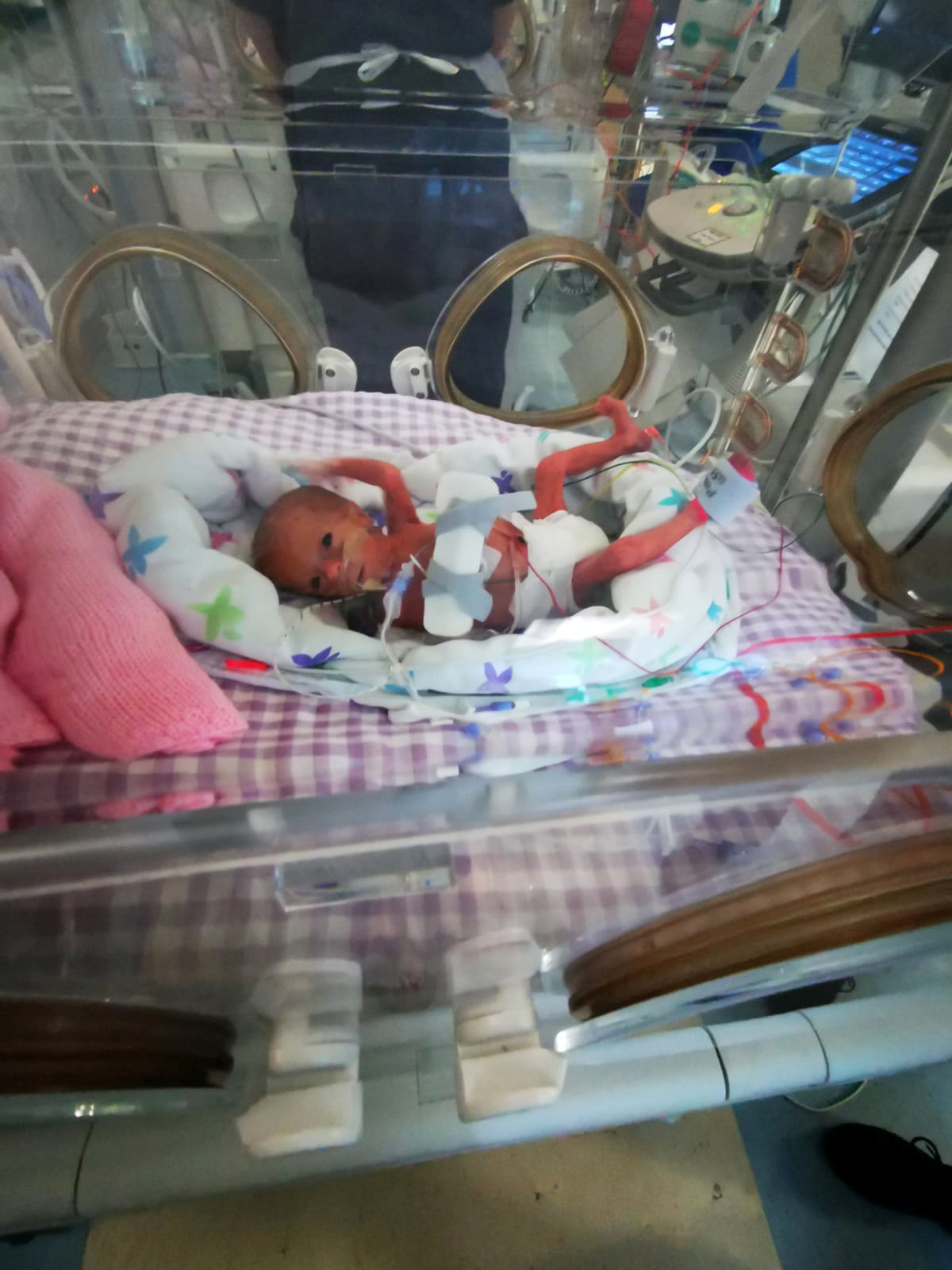 She suffered three miscarriages in one year – each time after she endured IUI in order to fall pregnant.

Siobhan couldn't carry a baby because she has a full hysterectomy after a perforation to her bowel.

They were running out of options and after being dismissed by doctors, the couple decided to pay privately for help at CARE Fertility Manchester in August 2019.

Hannah said: "I didn't feel well for a long time after giving birth to Izzy but health professionals just passed it off as me having low iron or low this that and the other.

"We'd already had a horrendous time with Siobhan having a hysterectomy and needing a colostomy bag and then to continue to have miscarriages was just awful. 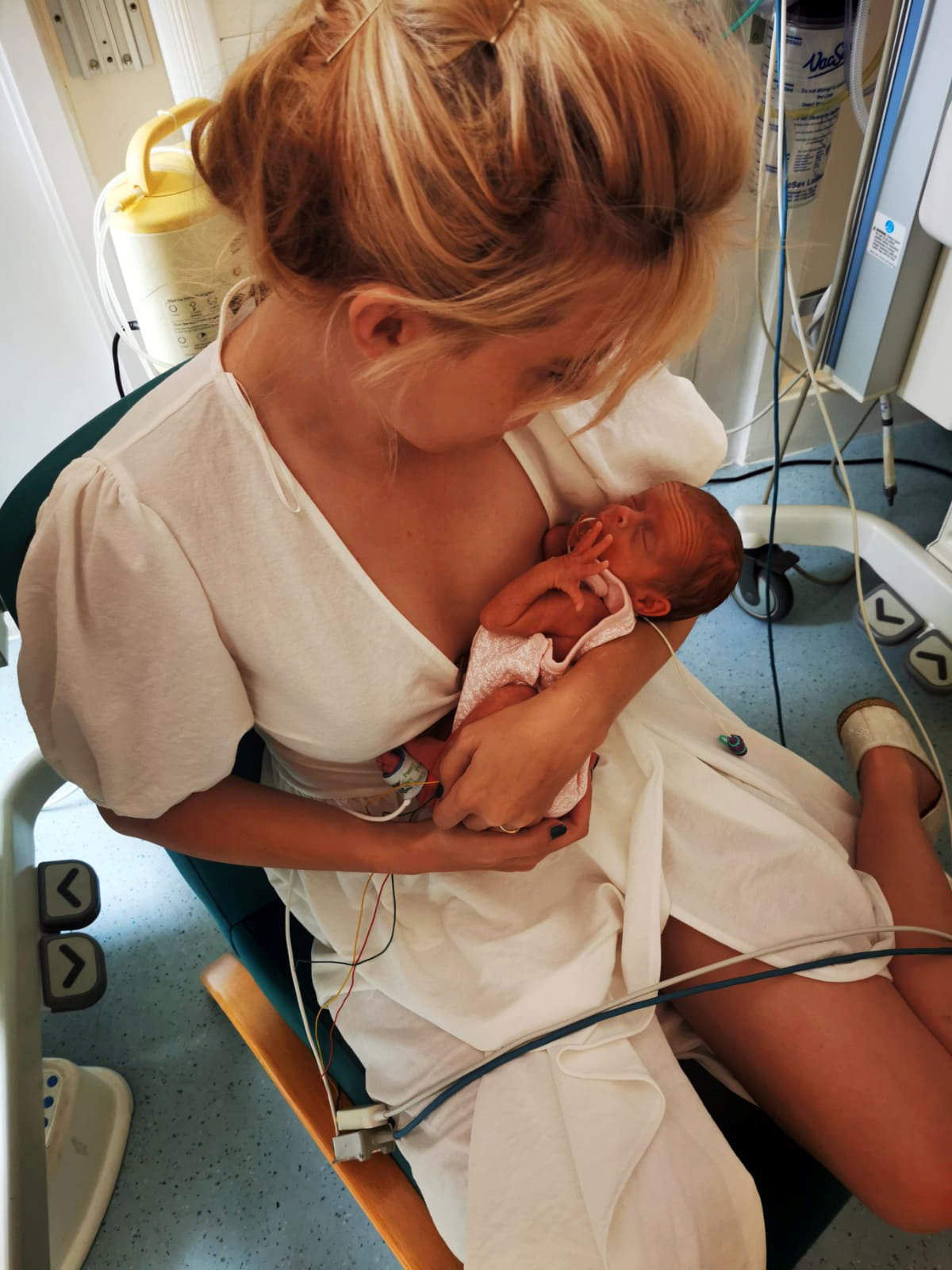 "I couldn't understand why I was having these miscarriages – I was getting pregnant but kept losing them and they were all at different stages as well."

Tests revealed she had developed antiphospholipid syndrome – a disorder of the immune system that causes an increased risk of blood clots – after her first baby.

Pregnant women with APS also have an increased risk of having a miscarriage, although the exact reasons for this are uncertain.

Hannah added: "Basically it causes blood clots and stops oxygen getting to the babies so the foetuses will just die but I didn't know I had it as it had developed after I had Izzy.

"Finding out that it was blood clotting problems and nothing to do with the womb, I started taking blood thinners to help manage the APS and then we went ahead and did IVF."

The couple discovered Hannah only had two eggs that were good enough to freeze – if they didn't work, they'd be out of options after spending an eyewatering £20,000 on fertility treatments.

I had three miscarriages before the diagnosis and then I fell pregnant with triplets – it was just absolutely amazing, and a complete shock too but we are so happy now.

Thankfully, the IVF treatment was a success but nothing prepared the two mums for the news that they were having triplets.

"I actually crashed into a barrier after finding out I was pregnant with triplets!" Hannah said.

"That's how I remember it – I came out of the hospital I wasn't really concentrating and went into a bollard at the hospital and scratched all down the side of the car!"

Full time mum Siobhan and Hannah kept the news of their pregnancy to themselves, only telling family after 12 weeks and friends after 16 weeks.

With Hannah going through her pregnancy during lockdown, she managed to keep it a secret for so long that her work colleagues only found out AFTER she gave birth.

Hannah said: "It was quite difficult handling a triplet pregnancy in the middle of a pandemic. 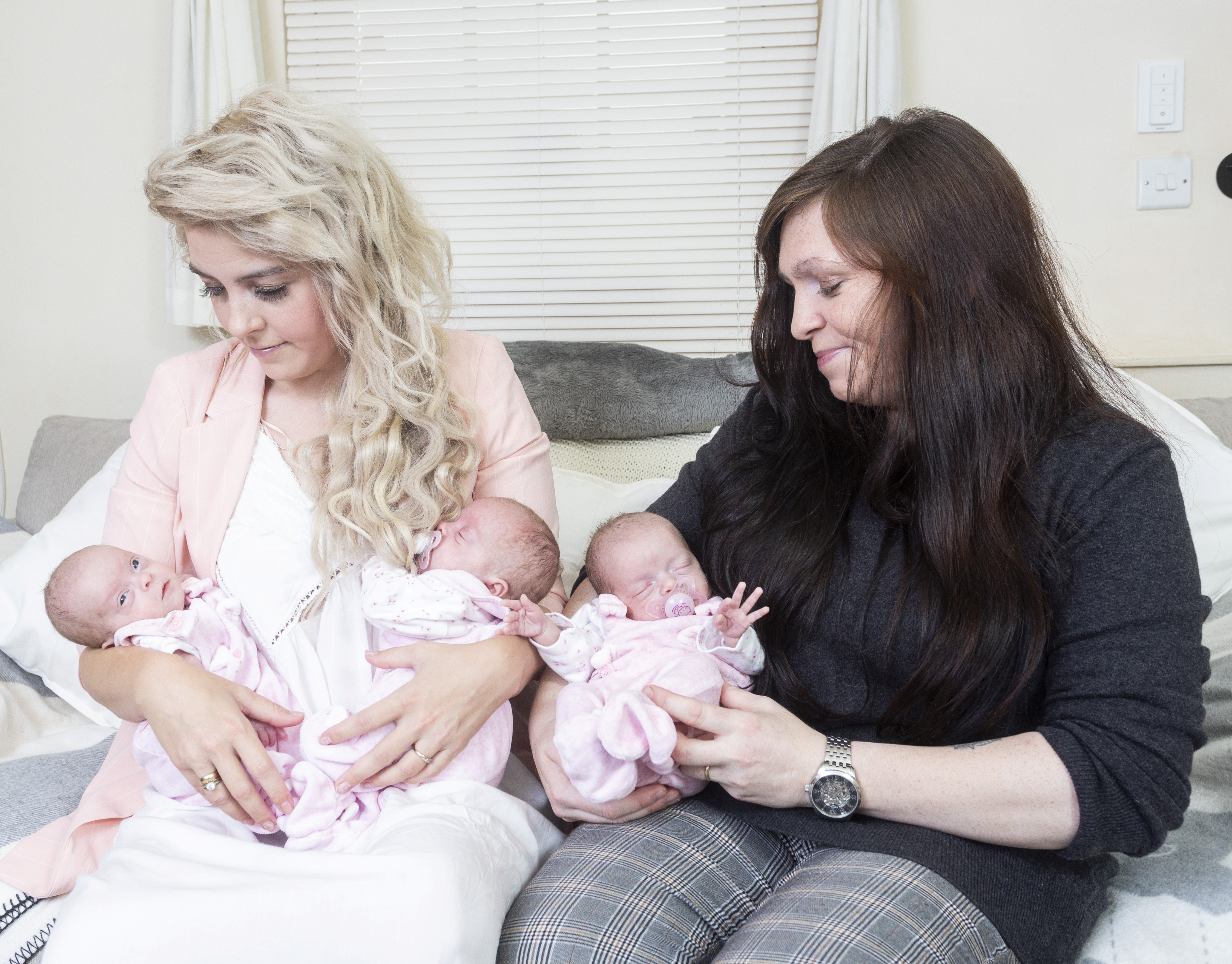 "I didn't really connect with the pregnancy at first. I kept it to myself and we didn't tell a soul.

"Along the way, every doctor kept saying 'oh this or that might happen' like twin to twin transfusion or we could lose one, so we didn't really consider telling people.

"We just pushed it to the back of our minds and as we were getting deeper into the pregnancy, we thought maybe this will happen after all.

"We only just bought all the stuff for them last month because even when they were born, it was still such a shock that they'd arrived!"

Alice was just 2lbs, followed by Amelia at 2lb 7oz and Everlyn at 2lb 13oz, and they spent five weeks in hospital due to their size.

We were going to get a mortgage and instead we blew all the money on fertility treatment – obviously we got our money worth with our babies.

"Our family had to wait five weeks to meet the girls which is unusual in itself because the pandemic meant they couldn't visit in the hospital," said Hannah.

"They're all absolutely stunned at our three new arrivals – they can't quite believe it.

"Being a same sex couple, we have had to fund this whole experience on our own, which has been difficult.

"We were going to get a mortgage and instead we blew all the money on fertility treatment – obviously we got our money worth with our babies!

"It's amazing having the girls home and Izzy loves her little sisters.

"We've finally got our family together and we couldn't be happier!"

In other news, a mum gave birth to her brother's baby so he and his partner could avoid using a stranger as a surrogate.

And dad of seven (including quints) Chad shows how he organises his bumper brood.