Meghan Markle, 38, is the Duchess of Sussex and a member of the Royal Family.

As such, much like her relative by marriage Kate Middleton, she could be eligible to borrow the Queen’s royal jewellery.

However, since marrying Prince Harry in May 2018, over a year ago, Meghan is yet to wear a single piece of the Queen’s jewellery.

Even for state dinners, at which royals tend to wear their most lavish jewels, Meghan has gone without a tiara and has worn jewellery bought or borrowed from modern jewellers, not royal pieces.

Meghan Markle news: Why has she still not worn any of the Queen’s jewellery?

For a state dinner in Fiji in October 2018, Meghan wore a pair of yellow diamond drop earrings from Hong Hong company Butani, estimated to be worth half a million or more by Deborah Papas, gemologist from Prestige Pawnbrokers of Channel 4’s Posh Pawn.

Besides her wedding tiara, which was borrowed from the Queen, Meghan has worn only jewellery she has bought herself or was gifted privately. The royal jewel vault appears off limits to the former-actress.

This is in stark contrast to Kate Middleton, who is very often seen wearing the Queen’s jewellery.

She has worn the Cambridge Lover’s Knot tiara, a favourite of Princess Diana’s, on numerous occasions.

She has borrowed gifts from foreign rulers, such as the Nizam of Hyderabad, and incredibly historic pieces such as the Diamond Collet necklace which belonged to Queen Alexandra and was worn by the Queen Mother.

Even hugely sentimental pieces she has borrowed from Her Majesty, including a diamond bracelet that was a gift to the Queen from Prince Philip, 97, on their wedding day and was made with jewels from his mother’s tiara.

In fact, it has been claimed Kate is largely allowed to borrow whichever jewels she likes from the royal collection and the Queen’s private collection.

A source told Grazia: “Kate gets the pick of the jewels for big occasions and the Queen is happy to open up her jewellery box.

“Kate has been clever to befriend Angela Kelly, who is in charge of the Queen’s personal jewellery collection and oversees the loans.

“Generally, Kate is allowed to borrow whatever she fancies.” 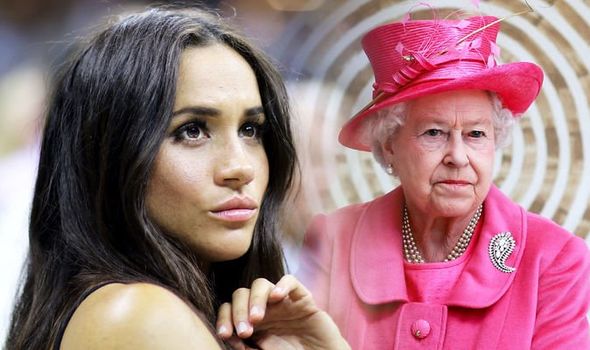 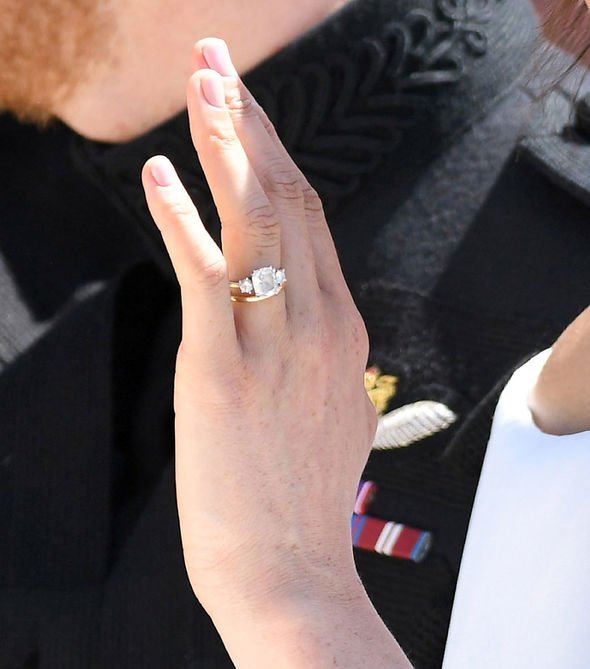 Meghan has been given new jewellery as gifts by the Royal Family but has never, as of yet, been allowed to wear a historical piece from the collection.

She was given a baptism bracelet by Prince Harry after she was baptised prior to her wedding. She has been given various Cartier gems by Prince Charles.

Meghan has worn some pieces of jewellery that did belong to Diana, but these were from the private collection passed down to Harry and William to share between their wives.

The closest Meghan has got so far to wearing a piece of the Queen’s jewellery was when she stepped out on her first official engagement with Her Majesty in Cheshire on 14 June 2018.

She was wearing a pair of pearl and diamond stud earrings, reported to have been given to her as a gift by the Queen.

Many might have mistaken then gems for the monarch’s, if it wasn’t for the fact that the Queen was wearing her original versions at the same time, making it clear that these pieces were not borrowed.

Kate Middleton, on the other hand, has borrowed the Queen’s original pair, having worn them on a number of occasions. 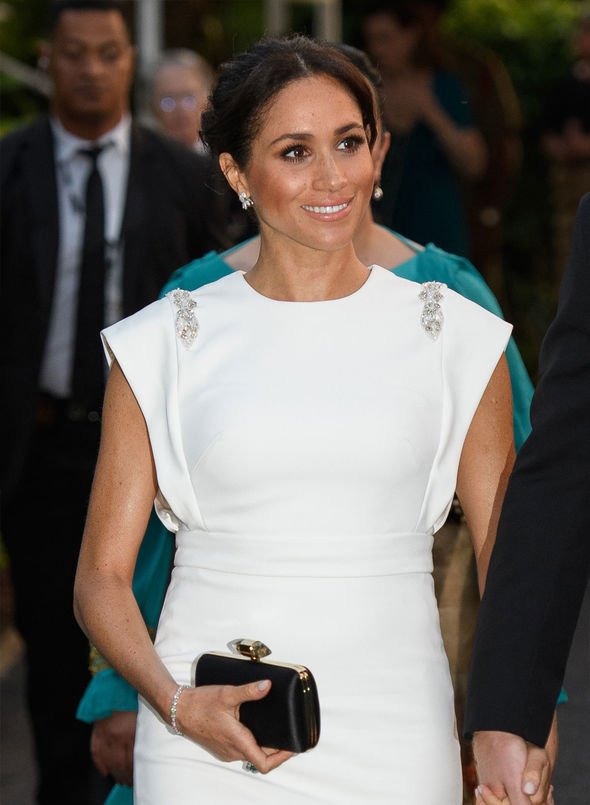 The question remains, why has Meghan not worn a single piece of royal jewellery to date?

It was claimed that Meghan Markle was banned from wearing the Queen’s jewellery in reports earlier this year.

Making the claims on television, Sun journalist Dan Wootton discussed the story on ITV’s Lorraine today. He explained: “The Queen is in charge of the royal collection, a massive collection of all of the artefacts that the country and the Royal Family own.

“Included in that are some iconic prices of jewellery, many of which have been leant to Princess Diana. We’ve seen Kate wear certain items from the royal collection.

“The Queen has to give permission for any member of the Royal Family to wear any of these items of jewellery.”

And according to him, the Queen has decided not to extend this honour to the former-actress. He said: “The Queen has actually banned Meghan from wearing any pieces of this jewellery and the Queen personally assured Prince William this includes any piece that was worn by Princess Diana.”

However, Vanity Fair published a report claiming Meghan would be allowed to borrow royal jewellery, l those pieces worn by Diana.

A source told the publication: “I find it very unlikely. It’s not the kind of thing the Queen would do. She is very generous when it comes to lending jewels to her family.”

However, the Duchess of Sussex is still yet to wear any royal jewellery. Whether she will have the opportunity in the future is yet to be seen. 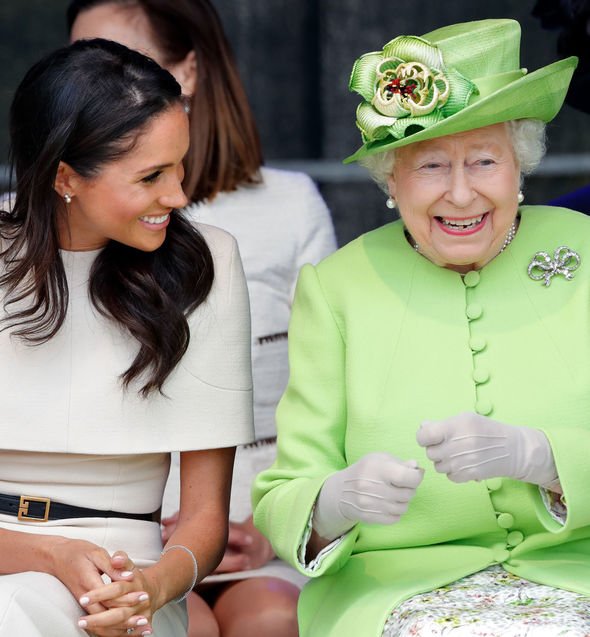 What jewellery might Meghan Markle wear for her first UK state dinner?

An expert predicted she will wear the Saudi Sapphire suite.

Ailsa Russell Appraiser Prestige Pawnbrokers of Channel 4’s Posh Pawn said: “Princess Diana allegedly left all of her jewellery to her sons, stating that her wish was for their wives to wear.

“The collection of the late Princess of Wales heavily featured blue stones and pearls, as both Meghan and Kate have also shown a fondness for stones such as blue sapphires and aquamarines hopefully much of the beautiful collection will continue to be worn.

“The Saudi Sapphire suite, a wedding present to Diana from the then Saudi Crown Prince, would be a beautiful choice for a state occasion for both women.”

A look at the wedding tiaras worn by recent royal brides

While royal brides tend to either wear a brand new piece or a wear an heirloom piece, Sophie, Countess of Wessex wore a combination of the two.

The exact name of the tiara is unknown.

The Countess has worn the piece of jewellery a number of times since her wedding day – such as to the nuptials of Crown Prince Frederik of Denmark and Crown Princess Mary of Denmark.

Sarah Ferguson tied the knot with Prince Andrew at Westminster Abbey in July 1986.

Sarah Ferguson also wore a previously unseen wedding tiara, with the jewellery having been made especially for her.

Princess Diana was known as Lady Diana Spencer before marrying Prince Charles back in 1981.

The royals tied the knot at St Paul’s Cathedral.

The late princess opted for her own family diamonds for the occasion, wearing the Spencer Tiara.

Meghan Markle, the Duchess of Sussex, wore the Queen Mary Bandeau Tiara for her and Prince Harry’s big day.

The former Suits actor tied the knot with the prince in May 2018, at St George’s Chapel, Windsor Castle.

The jewels hadn’t been worn for 65 years prior to the special event, having previously been well-loved and worn by Queen Mary, the grandmother of Queen Elizabeth II.

Kate Middleton and Prince William wed at Westminster Abbey, London, back in 2011.

The Duchess of Cambridge arrived at the church in the Cartier Halo Tiara.

It is set with more than 1000 diamonds, and crafted as a band of “16 graduated scrolls”, the Royal Collection Trust have said.