MUMBAI — Weddings are serious business in India. And traditional bridal wardrobes, which often include multiple changes for the days-long ceremonies, have kept homegrown design houses thriving for decades.

Yet a bride’s look rests not just on her finery, but also on her jewelry. And in recent years local fashion designers with well-established reputations have been going after some of that business, too.

“Our vision doesn’t stop at the clothes, it begins there,” Sabyasachi Mukherjee, one of India’s most popular bridal wear designers, wrote in an email. “It makes perfect sense that brands with strong, unique visual languages seek more control over the final look.”

There also is a lot of money at stake. According to a report published in August by India Brand Equity Foundation, a government-backed information center, the country’s gems and jewelry sector is one of the largest in the world, representing 29 percent of global jewelry consumption — although it is unclear what percentage of these purchases are linked specifically to weddings. The Indian market is expected to reach $100 billion by 2025 from $75 billion in 2017.

The fully realized look that Mr. Mukherjee described was what prompted Anita Dongre to step into the market long before others did.

The designer, whose House of Anita Dongre is said to be the country’s largest homegrown fashion house with sales of more than $120 million in 2019-20, introduced her Jaipur-inspired jewelry line, Anita Dongre Pinkcity, in 2013. 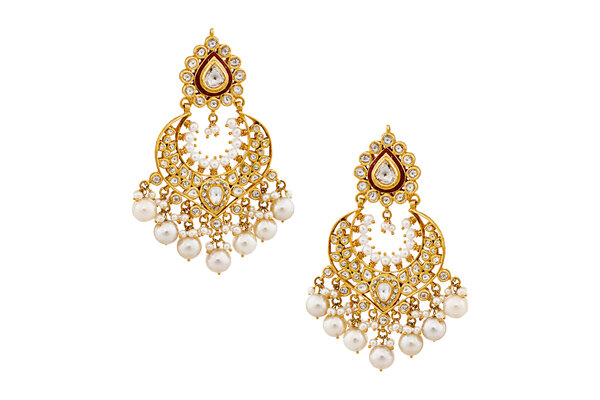 “I had just launched my bridal wear the year before,” she said. “I remember feeling at a loss while shooting its campaign because I couldn’t find the right jewelry to enhance my clothes.”

Ms. Dongre already was advising brides about jewelry, often encouraging her clients to bring their bridal sets — typically, a necklace, earrings, bangles, ring and headpiece — into the stores so they could be tried on during fashion fittings. “So, it felt like the right time to expand the brand’s point of view,” she said. “The goal was to help brides find a cohesive look under one roof.”

India’s love affair with precious jewelry is not new, especially when it comes to weddings. Mothers are known to start collecting jewels for their daughters’ trousseaus early on, typically buying from jewelers long patronized by the family or from specialized brands.

The collections offered by fashion designers — predominantly featuring uncut diamonds, locally known as polki — are handmade and then marketed using social media and celebrity patronage. But the nationwide pandemic lockdown that began in March brought weddings, and the fashion business, to a halt. Houses began resuming operations only around June, and designers are using the current festive and wedding season to finally introduce new collections.

Mr. Mukherjee said the pandemic and subsequent economic woes had changed consumer behavior. “There is more emphasis on value, wearability and versatility now,” he wrote.

Ms. Dongre said the crisis strengthened her resolve to focus on practical, wearable jewelry rather than cumbersome pieces that are worn just once, the same orientation she has with her bridal wear. Her biannual jewelry collections, each of which feature 25 designs, are sold by the piece rather than as sets, with each piece priced from $2,000 to $35,000. “We encourage brides to mix and match, and stack,” she said.

Her design focus is on polkis, accented with colored stones, pearls, engraving and enameling. It’s not uncommon for a single piece to take as long as four months to handcraft in Jaipur.

“We accommodate requests like changing the gemstone color where possible,” Ms. Dongre said. “And you will also find detachable pieces that can be re-worn beyond festive occasions, with Western wear even,” noting that Catherine, Duchess of Cambridge, paired the brand’s polki and pearl drop earrings with an Erdem dress for the UK-India Year of Culture party at Buckingham Palace in 2017.

And Beyoncé wore its chandelier earrings when she performed at the 2018 wedding of the heiress Isha Ambani and Anand Piramal. They were complemented by a matha patti (headpiece) and hath phool (hand harness) from Ms. Dongre’s silver jewelry line, and an outfit by the couturier duo Abu Jani and Sandeep Khosla.

Manish Malhotra, a Mumbai-based fashion designer and movie costume designer, has reimagined polki in a modern way to complement his glamorous clothes.

In August 2019, he introduced Manish Malhotra Jewellery in collaboration with Raniwala 1881, a Jaipur-based brand. “We have since released 50-piece jewelry drops to coincide with every new clothing collection,” he said.

Mr. Malhotra pairs polkis with carved custom-cut stones like Zambian and Russian emeralds, Burmese rubies, morganite, pink opal and mother-of-pearl. His two recent best selling designs are necklaces with polki and Russian emeralds set in 18-karat gold — both seen on leading Bollywood actresses. One is an elaborate multilayered piece that was worn by Kiara Advani while the other, a delicate design of pearls and tourmalines, was seen on Kareena Kapoor Khan.

Also, Abhinav Mishra Jewellery, a line of polki, mother-of-pearl, gold, emerald and pastel enamel jewelry made in association with AKM Mehrasons Jewellers, is to be introduced in December.

As for Mr. Mukherjee, whose Sabyasachi Jewelry was founded in 2016, he releases one major collection a year, a mix of heritage jewelry alongside more whimsical pieces, with prices from $2,500 to $1 million. He often works with table-cut, rose-cut and mutual-cut diamonds juxtaposed with a medley of gemstones — Colombian emeralds, natural pearls, sapphires, opals, moonstone, peridots and more — all set in 18-karat and 22-karat gold. (Earlier this year Mr. Mukherjee also created an exclusive line for Bergdorf Goodman.)

And in mid-October the brand released a more affordable collection for intimate weddings with prices starting at around $1,700.

Mr. Mukherjee’s designs mix high and low, his trademark of sorts. “You might find the most expensive Burmese rubies set next to turquoise, or pink tourmalines with unpolished coral,” he said. “Old ways of thinking would call this blasphemy, I call it beautiful.”

Shanti Sadhwani Mahtani, a Hong Kong-based creative communications consultant, wore Mr. Mukherjee’s creations with her Anita Dongre lehenga when she was married in May. The pieces included a polki and seed pearl choker in a mesh setting with jhumkas (earrings with dome-shaped drops) and a maang tikka (headpiece) to match.

Her mother bought a polki and emerald necklace with oversize stud earrings from Mr. Mukherjee, too, and the family traveled to Mumbai specially to make these purchases.

“I had shortlisted a few designs from their Instagram page before my visit,” Ms. Mahtani said. “But I finally chose these as I can wear them individually, too. Actress Sagarika Ghatge Khan also wore the same designs for her wedding reception.”

Beyond the gems, however, the bride also appreciated the experience. “The environment, from the minute we stepped into the Sabyasachi store, was anything but transactional,” Ms. Mahtani recalled. “It was one of the most memorable experiences from my wedding shopping.”

It’s that kind of feeling that produces five- and six-figure purchases, and drives much of the designers’ efforts to grow their lines. As Mr. Malhotra said: “It’s not just about jewelry. It’s all about emotions.”