If Albus Lumen designer Marina Afonina wins her category at the Australian Fashion Laureate, you have to wonder if there will be enough room in her trophy cabinet.

First came the BT Emerging Fashion Designer Award in March, then a highly praised show at Fashion Week. Next, she was the sole Australian to qualify for the final of the annual Woolmark Prize and, now, she is up for best emerging designer at Tuesday's ceremony. 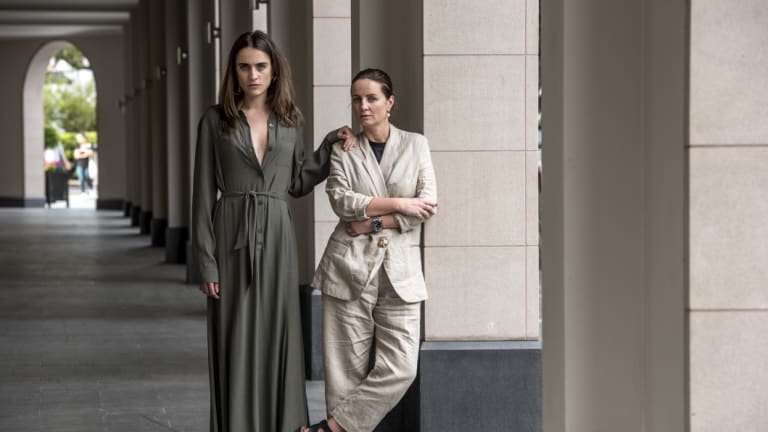 Fashion Laureate finalist Marina Afonina, right, with one of her designs being worn by model Charlotte Coquelin.Credit:Steven Siewert

But the Russian-born, Sydney-based designer seems unfazed by it all. She is focusing on her Woolmark final entry (no spoilers, just that the collection "aesthetically stays true to [her] brand") and, although she is considering an international show (perhaps Paris) next year, she sees no rush.

"I could make Albus Lumen bigger and larger if I wanted to, but I don't really want to go there yet," Afonina says. "It's baby steps."

Afonina, 39, started Albus Lumen in 2015, after establishing herself as a celebrity stylist with clients including Elle McPherson and Lara Worthington. With its focus on natural fabric and trend-free design, the brand has developed a strong following among the country's fashion set.

It is all a far cry from Afonina's days as a finance student at Sydney University.

"I came to Australia from Russia in '98, and I wanted to do fashion straight away," she explains. "But… it's such a hard industry to get into."

After a year of the corporate grind, she enrolled at FBI Fashion College, joining Harper's Bazaar as an intern where she worked her way up to become the publication's fashion editor. A freelance styling career followed.

Three years after Albus Lumen's launch, Afonina is "still learning" but, in a time where a number of Australian brands face closure or have entered voluntary administration, she attributes her success to finding the "right people" and not bowing to trends.

"You need to have your own identity and stand behind it, otherwise you're not going to survive," she says.

And, although it may not have been her passion, she says she can't ignore the helpfulness of that year in finance.

"It gave me a lot of power to control the business."

Now in its 11th year, the Australian Fashion Laureate was established by IMG and the NSW government to celebrate the local fashion industry.

This year, the Laureate has introduced two new categories: best model and, as staff continue to be cut from Australia's fashion magazines, best fashion editorial.

As someone who got her start at Harper's, Afonina laments the landscape has "changed completely" in the past decade.

The 2018 Fashion Laureate winners will be announced in a ceremony at Sydney's State Theatre on Tuesday night.