Two years ago, Dane and Brooke Carillo brought home Mackey, an English cream golden retriever, to their two-bedroom apartment in Manhattan, but they quickly realized he wasn’t cut out for city life.

When they leave for work, “Mackey’s usually a little sullen, a little sad,” said Mr. Carillo, 34, a finance trader who lives in a co-op in Chelsea.

To make sure the puppy stayed active, they first hired professional dog walkers to take Mackey on twice-daily, 45-minute strolls. But it wasn’t enough. “He likes to be outside when we’re in New York, but he doesn’t love to walk that far,” Mr. Carillo said.

On a friend’s recommendation, they hired a company called My Dog Hikes to whisk Mackey away to the New Jersey countryside for three-hour hikes in the woods every Monday. “He gets super-excited,” Mr. Carillo said. “We were concerned with his exertion, to make sure, as a puppy, he wasn’t just laying around.”

Call them coddling or overindulgent, but affluent dog owners like the Carillos have given rise to newfangled services like My Dog Hikes and Kristi’s Kanines. For $85 to $130 a day, they will take city dogs hiking in beautiful places like Harriman State Park and South Mountain Reservation, while their owners are cooped up in cubicles. For an extra charge, the dogs even get a post-hike bath.

“He’s so much more alive when he’s outside the city,” Mr. Carillo said. 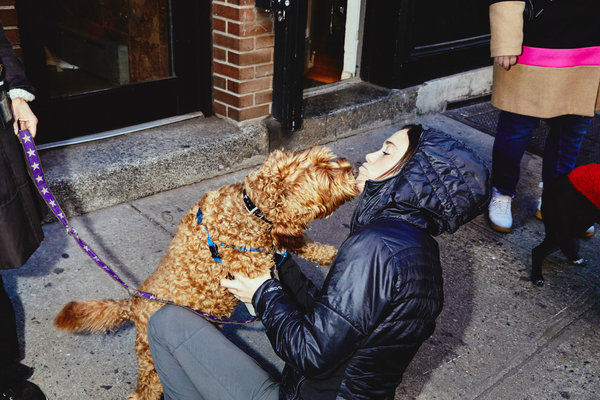 At 9 a.m. on a brisk October Monday in SoHo, three dogs were lined up outside a dry cleaner, like children waiting for the school bus. They barked, wagged their tails and jumped on their hind legs as a black Toyota 4Runner pulled up to the curb.

The dogs made a beeline for Andrea Klein, 33, the founder of My Dog Hikes, and her lead hiker, Mia Godwin, 27, who guided them into the back seat and secured them with tether-like seatbelts clipped to their harnesses. “Closing!” Ms. Klein said in her alpha-dog voice, as her charges tucked their paws under their furry bodies.

Some of the dogs have more pampered lives than others. Leo Moon, an Australian labradoodle who hikes weekly, appeared in an anti-fur campaign with Gisele Bündchen last year.

With everyone buckled in, they drove to the Upper West Side to pick up four more dogs. Among those waiting was Elena Atkin, 59, a homemaker who works with various charities. She and her husband, Doug, a venture capitalist, adopted Emy, a Labrador mix, from a rescue organization in Sag Harbor, N.Y., but they didn’t want her sitting around the apartment all day.

So eight years ago, they signed Emy up for three hikes a week with My Dog Hikes. (She recently scaled back to once a week. On her off days, Emy goes running with a professional dog runner along the East River promenade.)

One of the program’s perks is an annual “pawrent teacher conference,” where owners and their dogs meet at a bar to mingle and talk about each dog’s behavior. It had taken place the previous night at Black Door, a dog-friendly bar in Chelsea.

“I got to meet Emy’s playmates,” Ms. Atkin said. “Emy has her own life outside of the home. Who knew?”

Once the dogs are comfortably situated, the team drives about 45 minutes to South Mountain Reservation in West Orange, N.J., a pristine 2,100-acre nature preserve with rigorous trails marked by a collection of miniature fairy houses. In the gravel parking lot, the dogs disembark one by one, so Ms. Klein and Ms. Godwin can sort them into groups and escort them onto the trail. Or rather, so the dogs can escort them.

With the parking lot out of sight, the hikers unleash the dogs one by one. A few pups take a bathroom break. Theo, the gray Weimaraner, tears up and down the path. Otis, an amber pit bull, barrels through the trees.

How is Ms. Klein so sure the dogs won’t run away? As an animal behaviorist, she trained most of the dogs herself. But just in case, every dog wears a waterproof GPS tracker.

“This is an extreme amount of trust, when you tell people from the city, ‘We’re going to be taking your dog off-leash hiking,’” Ms. Godwin said. She and Ms. Klein perform regular head counts. Both are efficient and easily manage 14 dogs for about three miles, while carrying knapsacks stocked with medical supplies and water jugs.

“I treat this like a Fortune 100 company,” said Ms. Klein, who previously worked on Wall Street. But sometimes, pet parents are tougher than C.E.O.s. “They have their intricacies.” Raisen, a Border terrier, wears a collar because her owner wants her to, even though Ms. Klein would prefer she wear a harness.

Dog hikers say that the field trips can have a profound effect on dogs’ behavior, particularly those confined by cramped apartments.

“For city dogs who live in this very controlled, sterile environment, there’s a lot of doggy impulses they have, but can never exhibit,” said Jennifer Wheeler, 36, an owner of NYC Doggies in Greenwich Village, which began offering hikes in 2011. “It’s good physically, but it’s even better psychologically for them to be off leash in nature, having a sensory experience. Not only do they transform on the hikes, but they become better adjusted to city life.”

Think of it as the canine equivalent of self-care.

Evelyn Lasry, 55, who owns Two Palms, a printmaking studio and gallery in SoHo, has certainly noticed a change in her 6-year-old yellow Labrador, Augustus. Six months ago, she enrolled him in twice-weekly hikes with Kristi’s Kanines, a hiking service that caters mostly to Upper East Side pooches. The physical and behavioral changes, she said, have been remarkable.

“He’s so much more fit. He has that sexy waist now,” Ms. Lasry said. “When he gets home, he comes running in with a smile on his face and running around in circles.”

“I’m a writer, so I’m always sitting at my desk,” said Julie Salamon, 65, a journalist and the author of “Wendy and the Lost Boys.” Her late shepherd mix, Maggie, hiked with NYC Doggies. “Periodically, I’d get a little notification from Facebook that there was a video posted, so while Maggie was out on the hike, I could watch her on the video.”

My Dog Hikes has an active Instagram feed with a passionate following. “People get obsessed with a certain dog and they write us 20 times a day,” Ms. Klein said, noting that she is careful to protect clients’ privacy. Sometimes, she’ll broadcast for a few minutes on Instagram Live.

There is an eight-month waiting list for My Dog Hikes, though spots tend to open up in the summer, when many dogs have free run of their owners’ vacation homes. Before a new dog is approved, Ms. Klein meets with the owners to make sure the dog can follow commands and is on anti-tick medication.

“No aggressive dogs, ever,” Ms. Klein said. “If they fight, they’re out.” But if a dog has potential to grow, Ms. Klein will work with it. She points to Luna, a pit bull who has “been kicked out of every day care she’s been to. The pit bull is really high energy, and they’re misunderstood a lot.”

By 2:30 p.m., the dogs start to fade, pausing for water. Ms. Klein and Ms. Godwin clip their leashes back on and return to the car for a tick check. The women sit cross-legged in the gravel parking lot, cradling each dog like an infant while looking for ticks.

Owners are required to certify their dogs’ tick medication, but every so often Klein and Godwin find a few. “I’ve become a connoisseur, unfortunately,” Ms. Klein said, picking a tick off Mackey.

Tuckered out from a day on the trail, some of the dogs fall asleep. On the drive back to the city, Klein and Godwin recap each dog’s behavior on the hike and draft report cards to email their owners.

“Mackey has come a long way! Our individual training sessions paid off!” read one report card, which rated him an A. “He checks in often with the pack leader and plays nicely. He loves to swim, chase and chew sticks.”