Fashion weeks are like style crystal balls that enable us to gaze six months into the future at what will be coming into the stores. But they can also cause purchase paralysis. After all, if that's what will be fashionable in six months, what the heck are we doing buying kitten heels/box bags/maxi dresses with puff sleeves now?

Well, the good news is that based on the trends on the catwalk at New York Fashion Week, which wrapped on Thursday, Australian time, there are plenty of things that are hot now that will still be here for summer 2020. 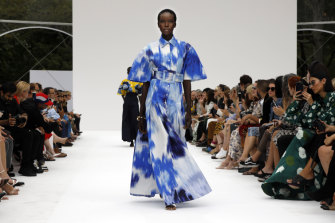 It’s a cinch … a model for Carolina Herrera wears a chunky square belt, one of the micro-trends of New York Fashion Week.Credit:AP

Buttery, coloured leather is most definitely a thing – locally, Bianca Spender showed some beautiful pieces in mint at Melbourne Fashion Week – but it also comes with a pricetag, so it's wise to know if it's going to be in fashion come next year. Good news! At Coach, leather skirts took on hues of marigold and plum, while at 3.1 Phillip Lim, the asymmetric leather tops in a neutral palette led to predictions that the leather shell is the elevated linen shirt for this summer and beyond. 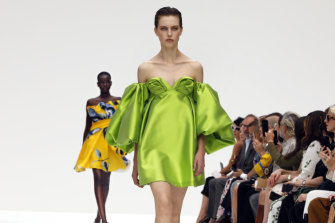 Ever since New York Fashion Week's unofficial style muse, former Disney actress Zendaya, stepped out in tangerine Carolina Herrera on August 23, it's been the hottest hue on fashionistas' radars. It was at Tom Ford, in billowing ball skirts, worn back with T-shirts, and sequinned at Eckhaus Latta. Lime was also a major feature colour at Tibi, Jonathan Simkhai and Zimmermann, whose green was more sea foam but still in the family. Expect to see lots of tangerine pops at the spring racing carnival, and, for the more daring, head-to-toe citrus looks.

The belt is back. After years of seeing T-shirts tucked into beltless jeans on Instagram, it's exciting to see the belt – specifically wide, '80s-style with a dominant square buckle, return to form. Carolina Herrera offered the accessory as a transition point between floaty maxi skirts and buttoned-to-the-collar boxy shirts, while Brandon Maxwell's waist-cinchers were more cummerbund in flavour. To really embrace the trend, look for styles in fabric with a matching buckle, or a self-belting parachute pant. 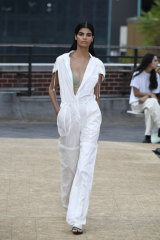 If you’re going to buy a boilersuit, make it breezy, like this one from Jonathan Simkhai.Credit:Sipa USA

Okay, so the boiler suit is one of those divisive garments. But if you're in the "in" camp, and want to ensure your purchase goes the distance, the styles in New York (Zimmermann, Jonathan Simkhai) were even looser and softer than those that have dominated the past season. So possibly skip denim and look for something almost parachute (but not too Kath & Kim – keep it neutral) or silk, a buy it a size bigger than you'd normally wear.

Bad news if you thought the crochet trend that first popped up on the catwalks this time last year was a passing phase. But good news if you have your eye on an Alice McCall crochet playsuit or a Staud crop-sleeve maxi – the trend is definitely sticking around. Ulla Johnson's models carried crochet bags with matching sandals, at Kate Spade there were pinafores (worn over shirts for a clever transeasonal trick) and at Gabriela Hearst, pieces of old fabric were rolled and knotted to create a fringed effect.